Spring 2015 arrived, and Freja was on the last straight away to being a finished boat.  We visited the Discovery yard for four days in late March to finalise details such as the colours for the blinds, cushions., spray hood and other deck canvas. We also changed our minds concerning two items we had ordered as “pre-installs.” We had the opportunity to have a day sail on the western Solent on Discovery 55 Kiloran. And finally, we met the couple who ordered Discovery 55 nr. 49 (we have number 48) — and they live 10 km away from us ! 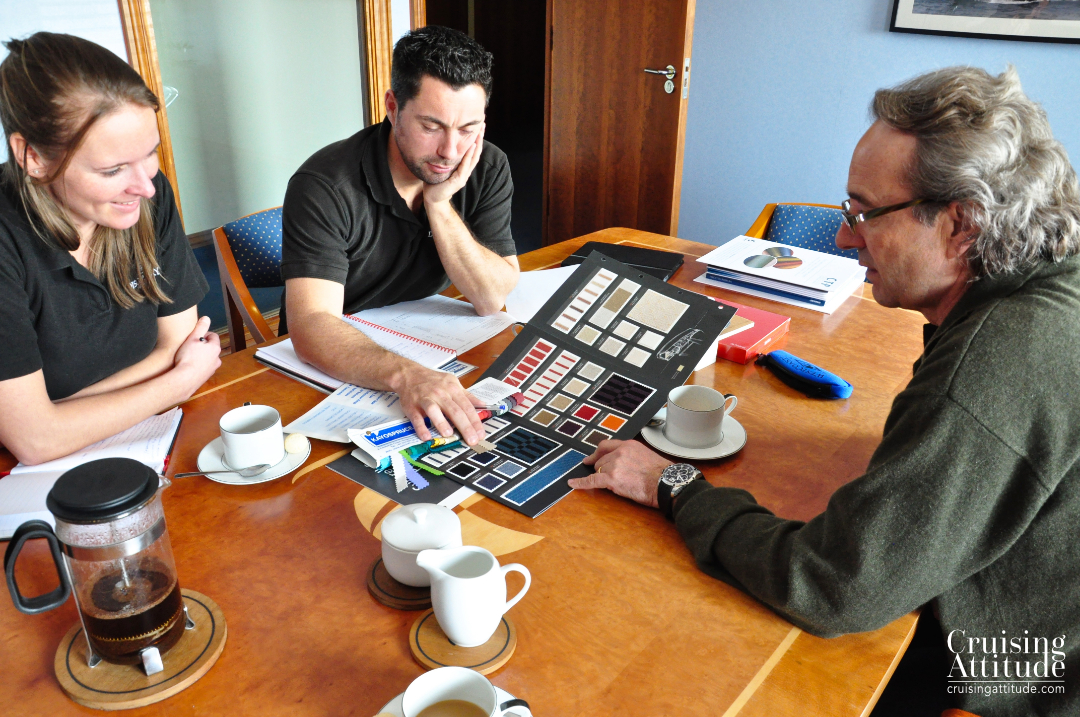 We had originally ordered four items as pre-installs (wiring, etc installed, but not the item itself).  These were :  SSB radio, camera up the mast, water-maker, and air conditioning. 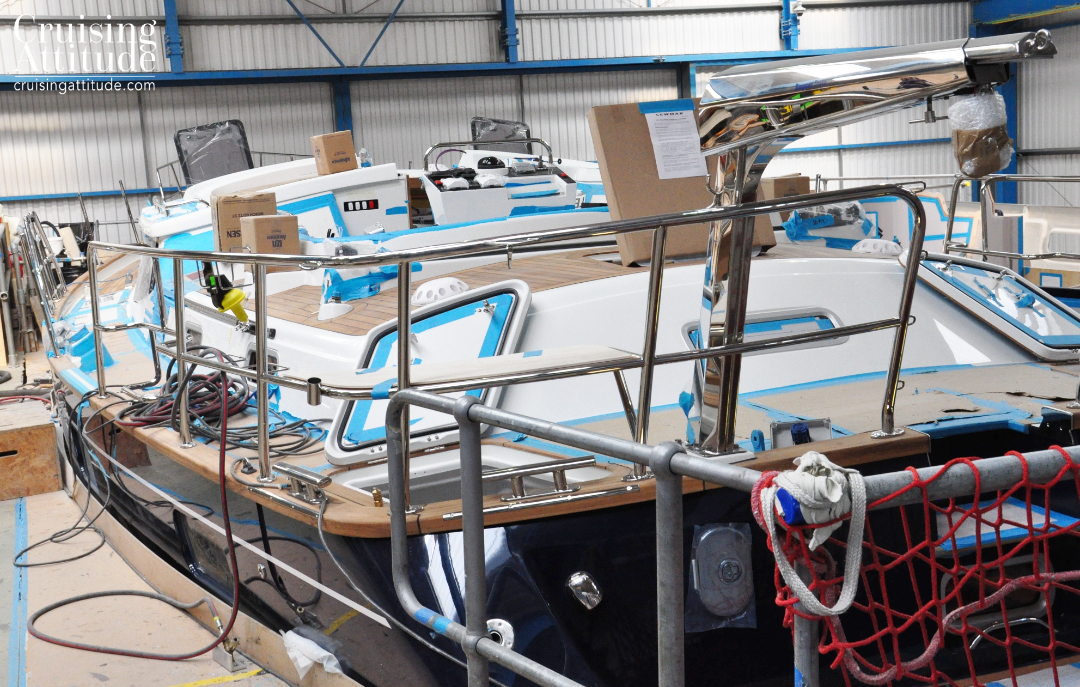 The reasoning behind this was that we’d be spending the seasons 2016 through 2018 in northern Europe, and would not really need the above.  We are still not sure if we will ever install an SSB (we have Iridium).  The camera on the mast would come in handy if we sail to the Bahamas (easier to see the shoals from higher up). 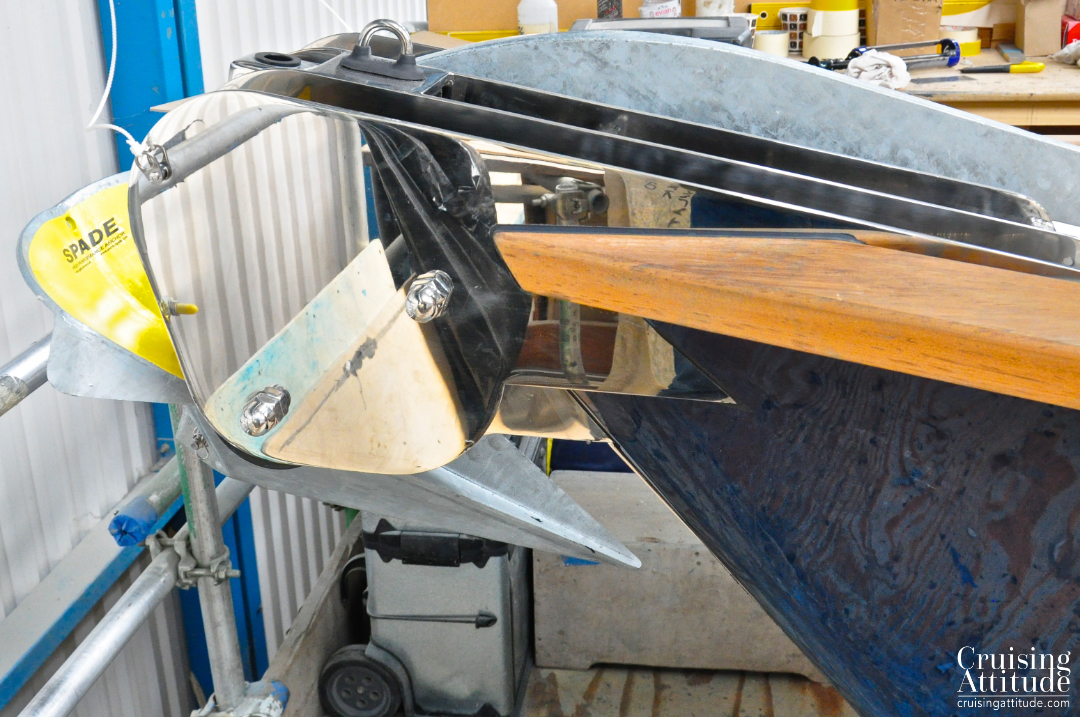 We decided to go for the complete installation of the water-maker because we noticed that our friend and coach Leon was making water during our springtime sail to Norway on Regina Laska the previous year.  It turns out that some marinas turn off the water and the electricity supply during the off-season in Scandinavia.  In return, it is free of charge to use the marina during this period.  Water would not always be available during the early spring and the autumn.  Finally, it’s always cheaper and easier to install things during the build than afterwards.

Discovery suggested the Dessalator 24 v model, which they said got great reviews from recent Discovery owners.  It sounded like a good idea to have the option of running the water maker from 24 v DC power if the generator stops working.  We have a total of 5 ways to make electricity: solar, wind (Superwind), water (Watt&Sea), engine, and the Onan generator, so if the generator is dead, we could still make water. The other advantages of this french-manufactured water maker are that it’s very small and it’s easy to use and maintain. 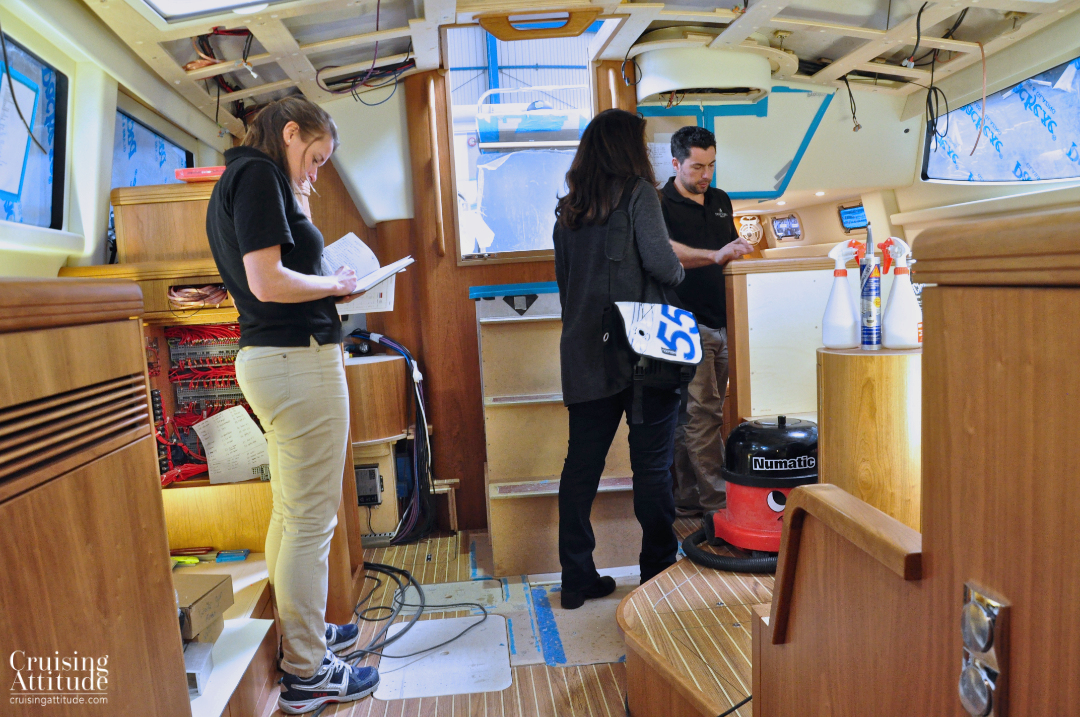 John and Sarah going through the final build checklists with Kathy

We also opted to do the full installation of the air conditioner because it’s something that’s really expensive to install after the boat is finished.  While we won’t be needing it very much for cooling down the boat in Scandinavia, the heat option on the air con will enable us to dry out the boat.  It’s a dehumidifier — something that will come in handy during the sometimes cold and raw Scandinavian spring. Hey, it can snow on the last day of April in Sweden.

We know it’s really a luxury item, but it will definitely be appreciated when we finally find ourselves in the tropics.  We chartered an un-airconditioned boat in the B.V.I.s and it was so hot and humid we could not sleep. At all.  We can chose which areas of the boat to cool with our system, so we can run the unit in our cabin only. The idea is to run it perhaps an hour before bedtime and then turn it off for the night. 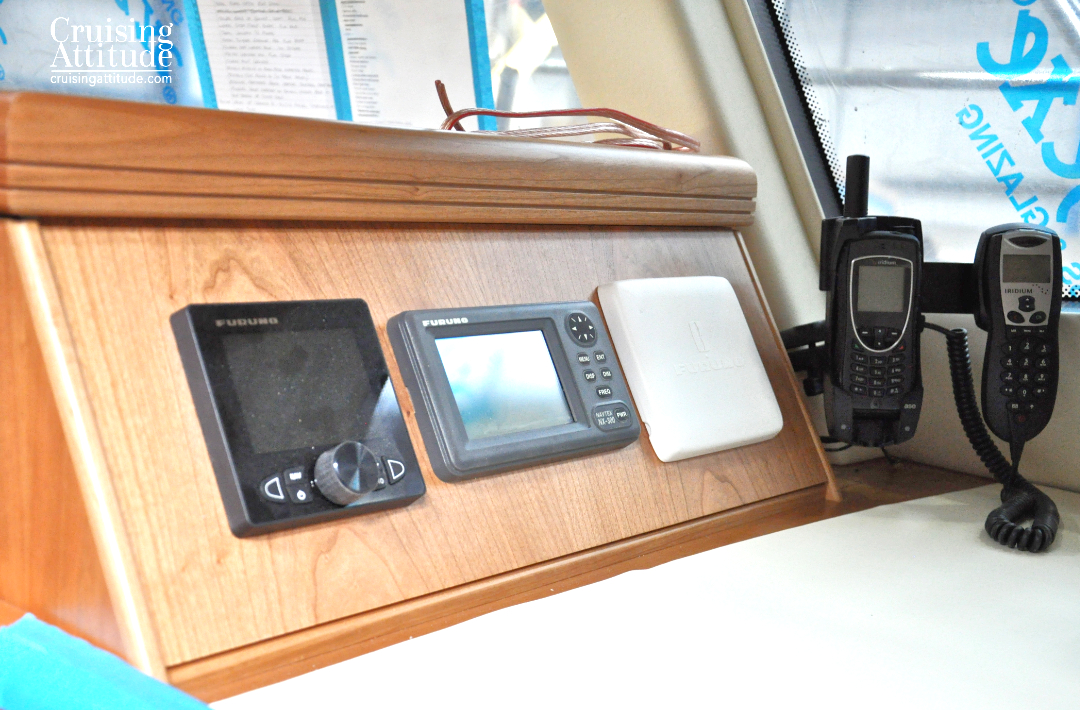 Our navigation table instruments have now been installed. 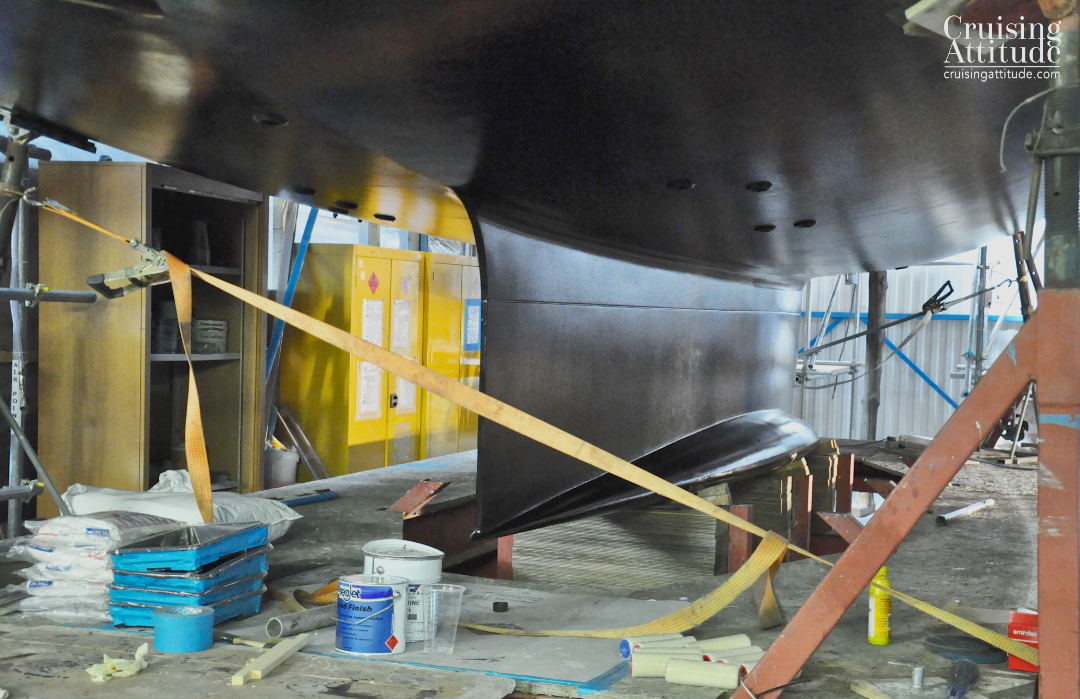 The Seajet Speed foul-release (non-biocide, silicon-based) paint has been applied.

Sailing on the Western Solent on Discovery 55 “Kiloran”

We were given the opportunity to sail the western Solent on Kiloran, a Scottish Discovery 55, that you can see on this video.  It was not only an great day of sailing, it was interesting to see the differences between various Discovery 55s. 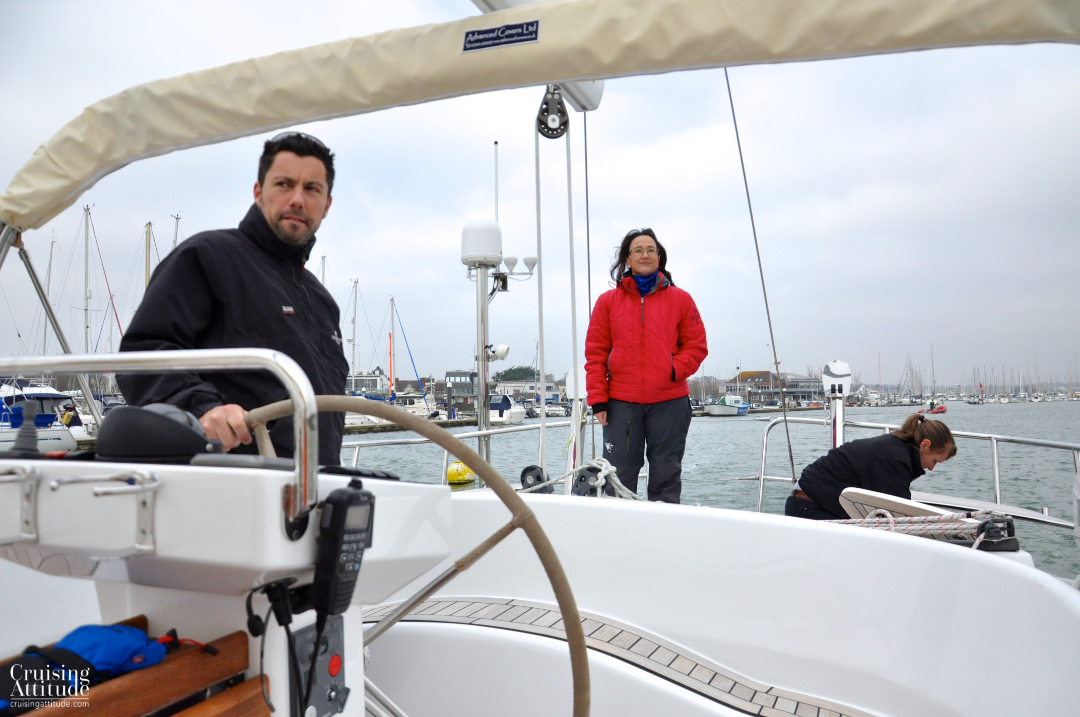 John Eustace taking us out of Lymington Harbour 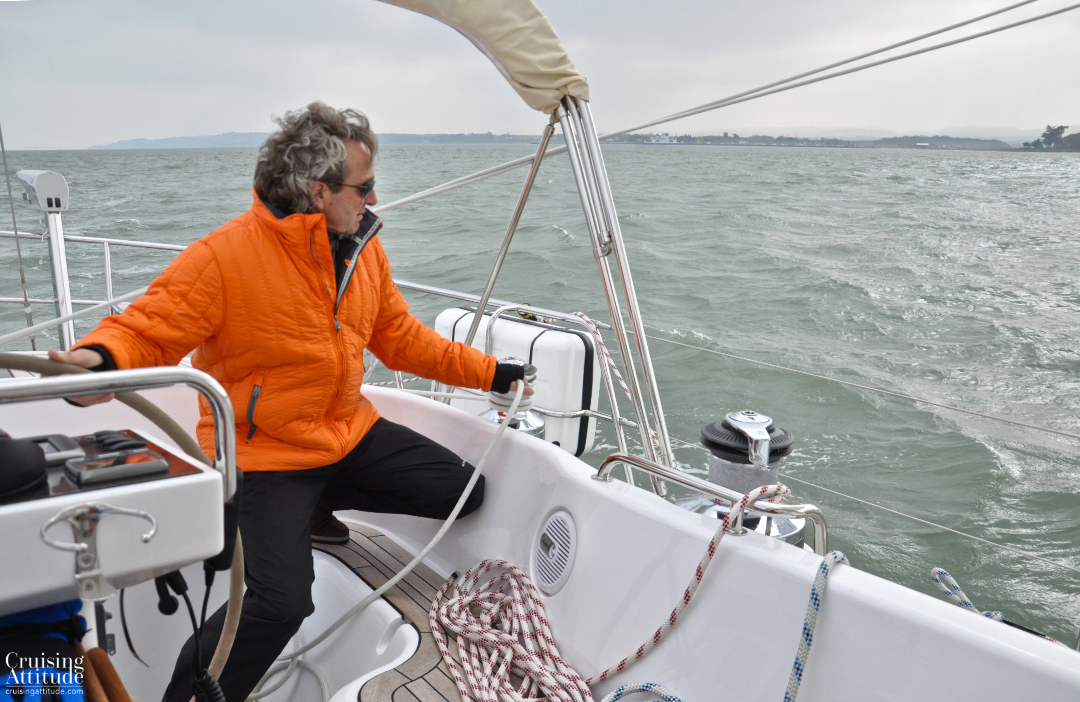 Isle of Wight on the port side 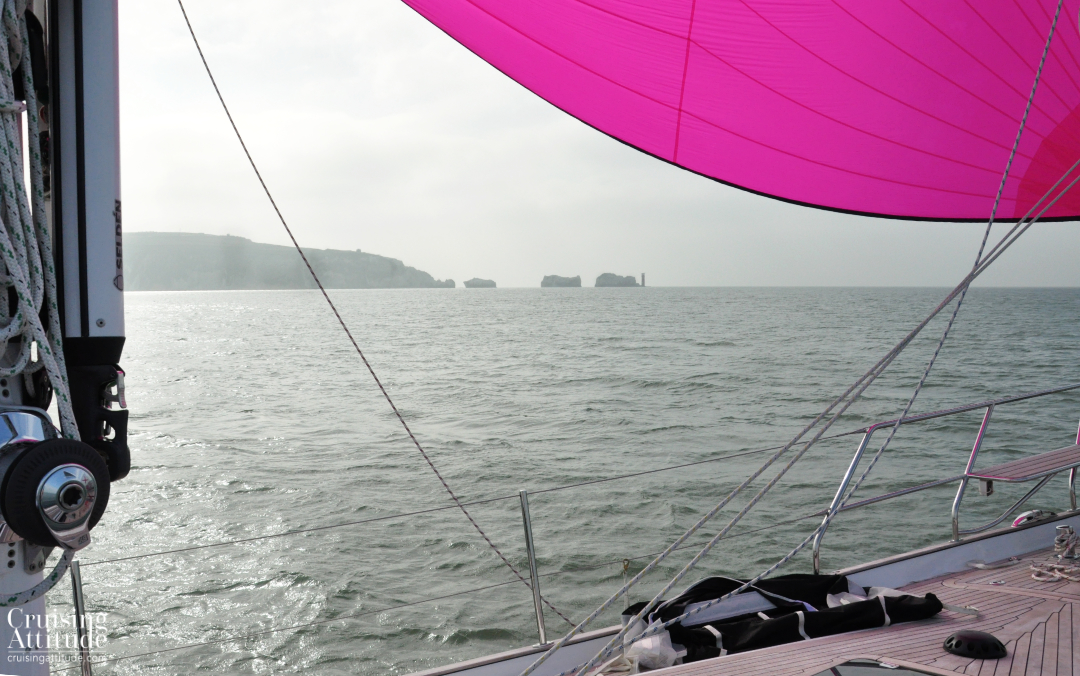 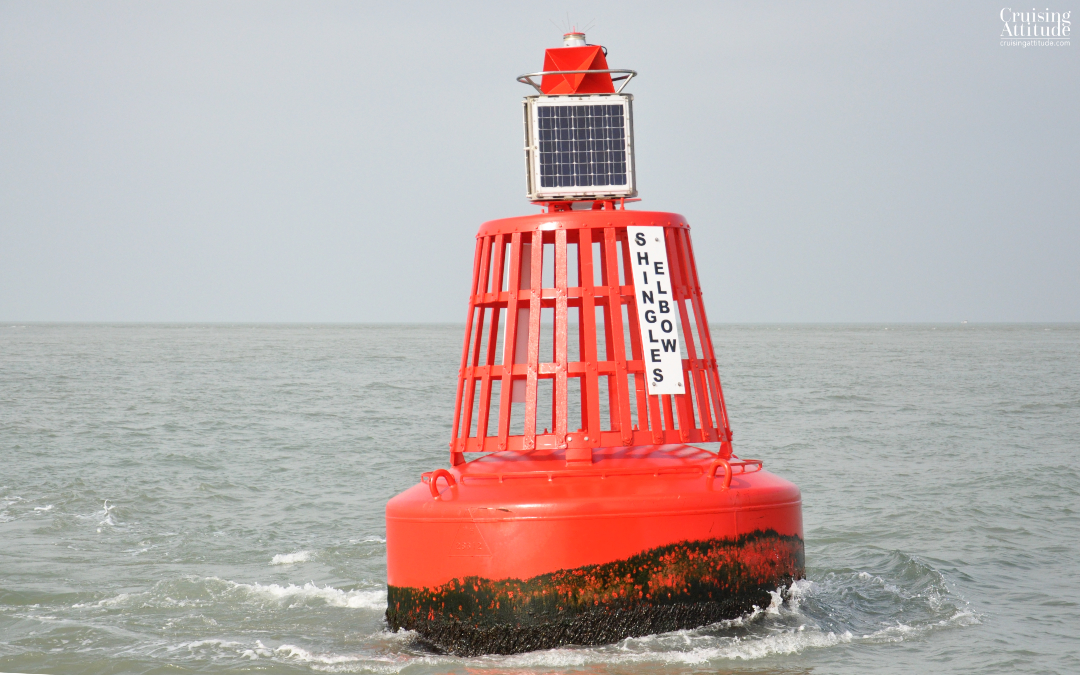 Running with the current in the western Solent 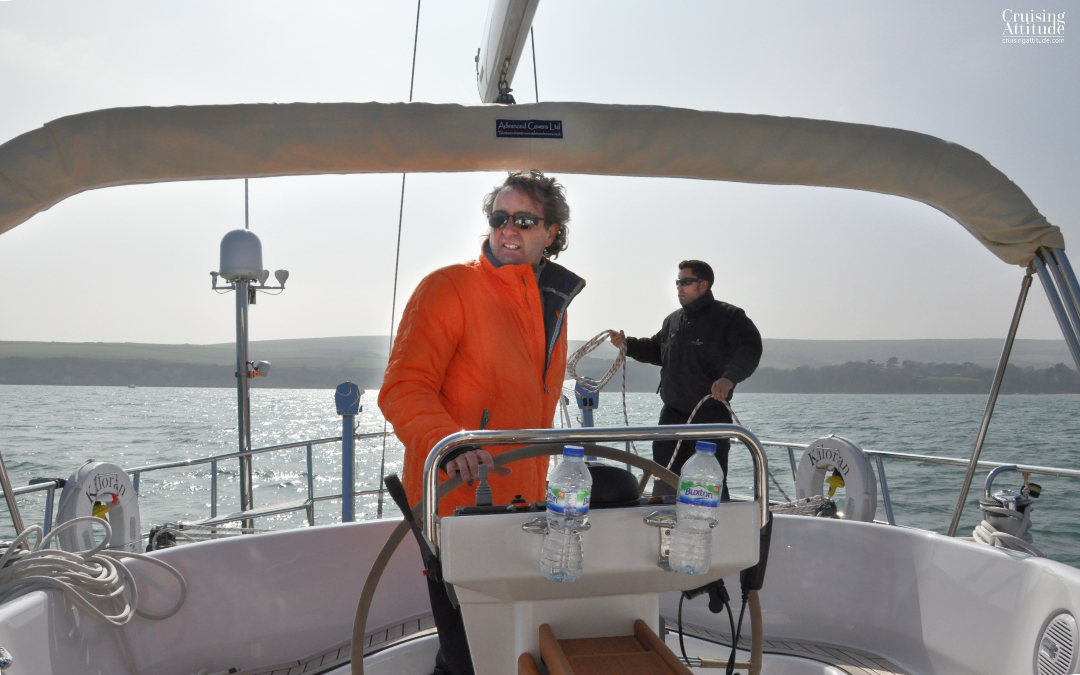 Our lunch anchorage in Studland Bay 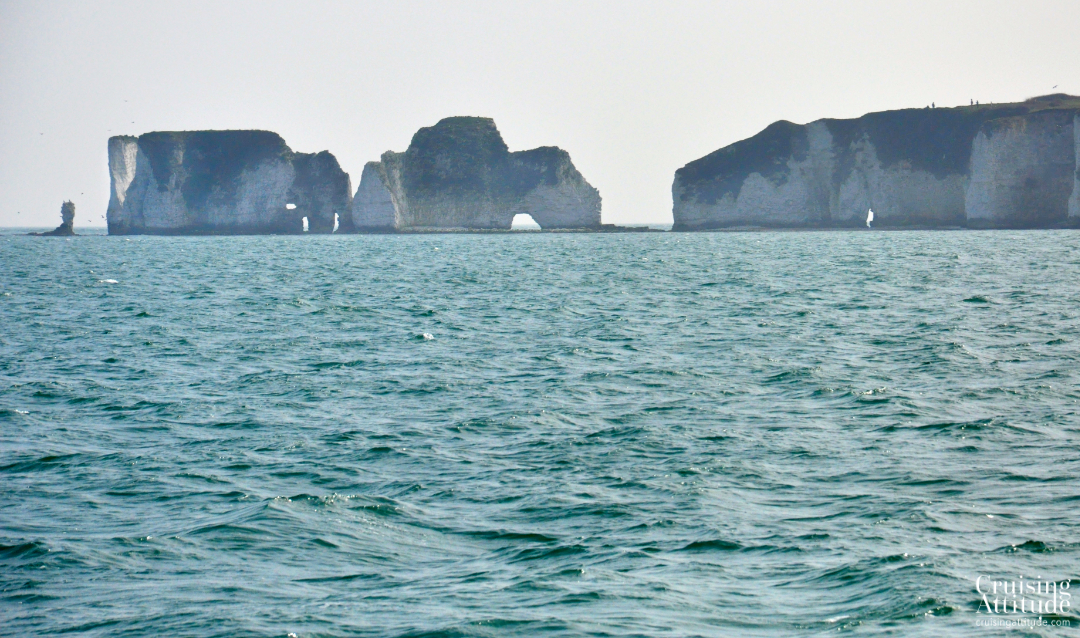 Kiloran has, for example, maple and bird’s eye maple instead of the cherrywood on Freja. Cameron, Kiloran’s owner, decided that that they would not need a hot tub in the Caribbean, so you see that the cockpit does not have a hot tub area in the video.  They opted for Lewmar winches and we liked the Andersen. Kiloran has bunk beds in the third cabin (as usual), whereas we asked for the creation of a workshop instead.

The navigation table on Kiloran is totally flat, whereas on Freja, there’s a section designed especially for us that houses some of our Furuno instruments.  You see Furled electric furlers on Kiloran, on Freja, we opted for the Rechmann furlers. Kiloran’s owners chose Raymarine, and we chose Furuno.  Our friends from Geneva chose B&G for Knotty Girl.

Each Discovery is different, so it’s fascinating to be able to look at several of them – and sometimes steal some good ideas!