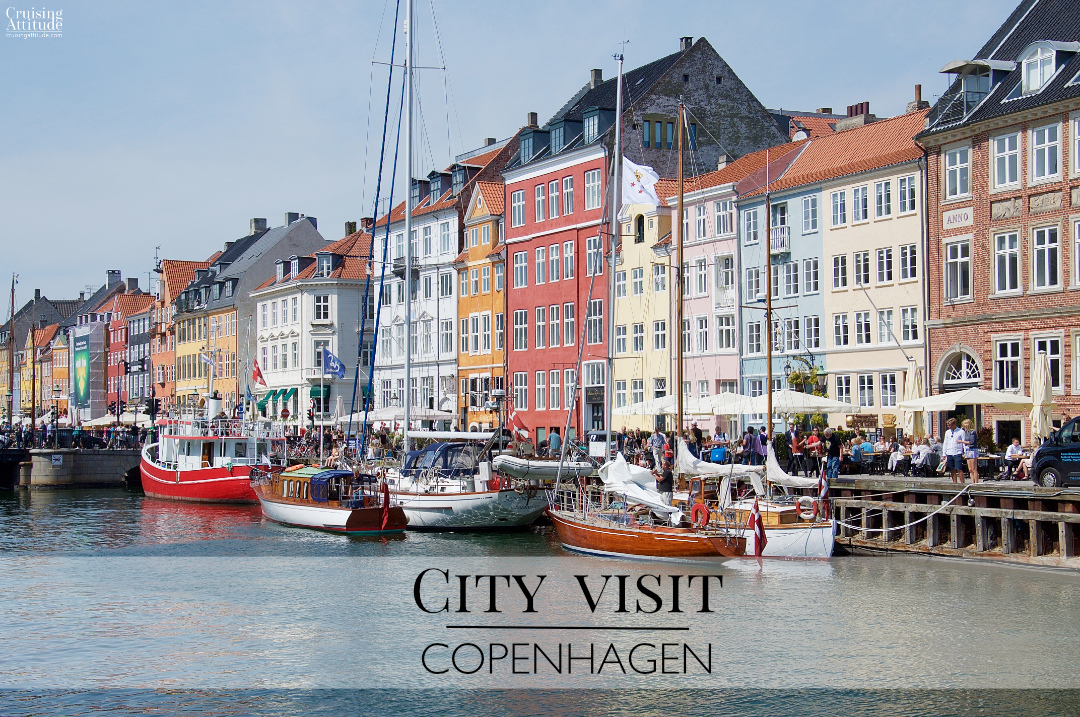 Many cruisers who visit Copenhagen only stay for a couple of days.  We understand, they perhaps have only a month or two in their cruising schedule — perhaps much less.  But Copenhagen deserves your time. We certainly had lots of time for Copenhagen.

It’s truly one of the most amazing cities in Europe (in our opinion, in the top 3). It’s charming without being cute.  Friendly without the fake smiles. Stylish without the pretension.  Historic, yet cutting-edge modern. Beautiful, yet humble.  Sophisticated, yet down-to-earth.

Perhaps the best word to describe the vibe in delightful Copenhagen is cosy or confortable.  You get the feeling that there is no  stress going on here — not even during rush hour.  We stayed in Copenhagen for a week and could have stayed for a month!

Our marina is a few metro stops from the center of town, but a 5-minute ride to the Amager Strand metro station. Copenhagen has a big bicycle culture, so we didn’t hesitate to unpack our folding bicycles and take them on the metro with us.  Bicycles are allowed on the metro outside of rush hours (7.00-9.00 and 15.30-17.30). You need to purchase a ticket for your bicycle (DKK 13 in 2016). The walk to the metro station would have taken us around 15-20 minutes.

We explored the Christianshavn area on our bikes on the first day. It’s the part of Copenhagen that most resembles Amsterdam with it’s criss-crossing canal system.  Some of the canals have guest harbours, but your boat needs to be less than about 45 feet to get a space.  The cobblestone streets, cafés, canals and beautiful architecture made for an interesting morning of exploration. 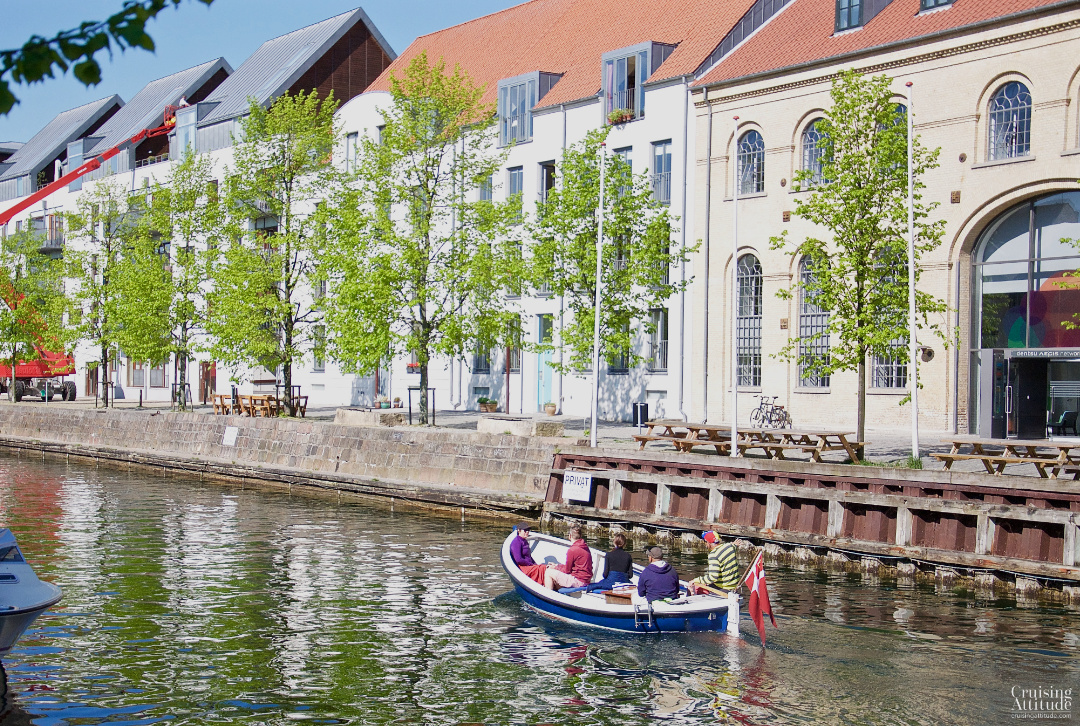 A common site in Christianshavn, Copenhagen 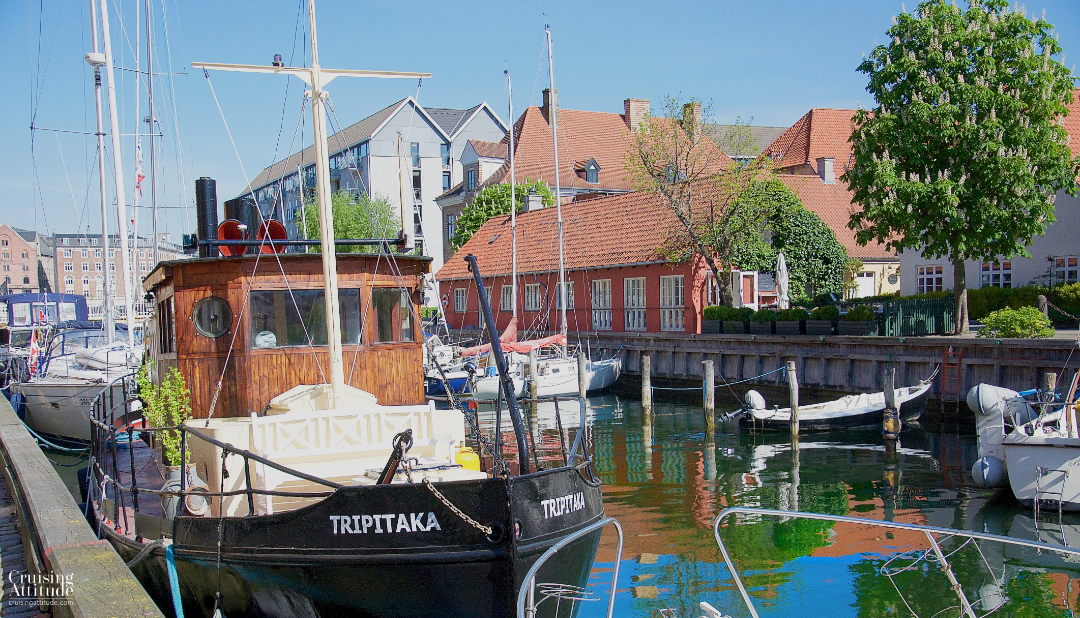 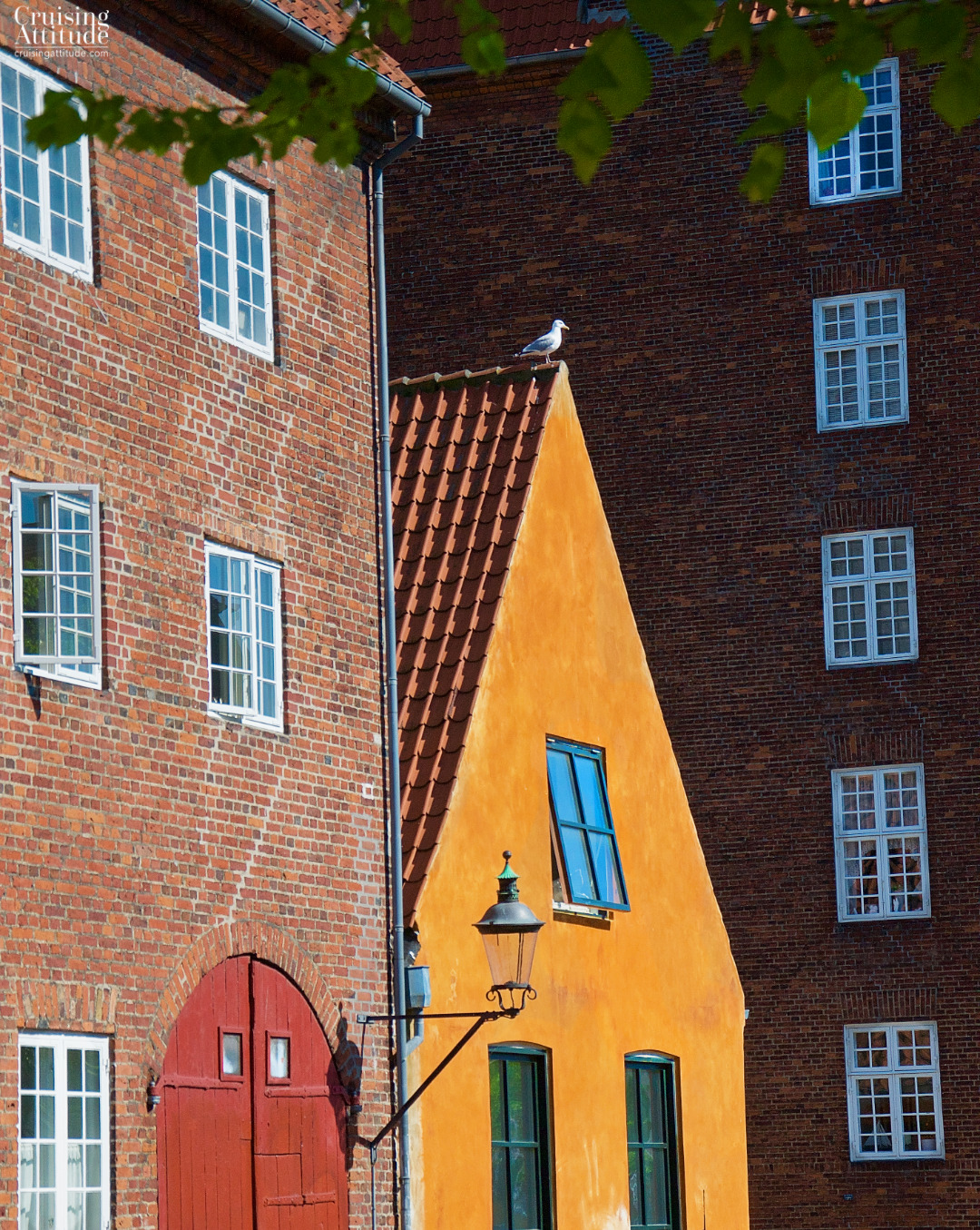 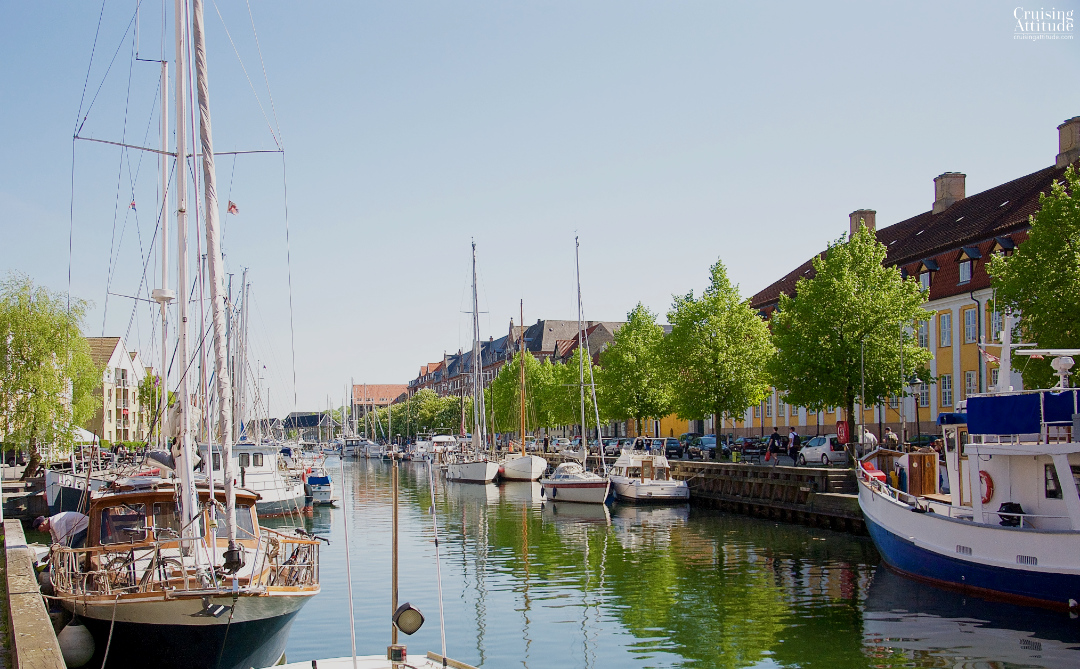 One of the marinas in Christianshavn 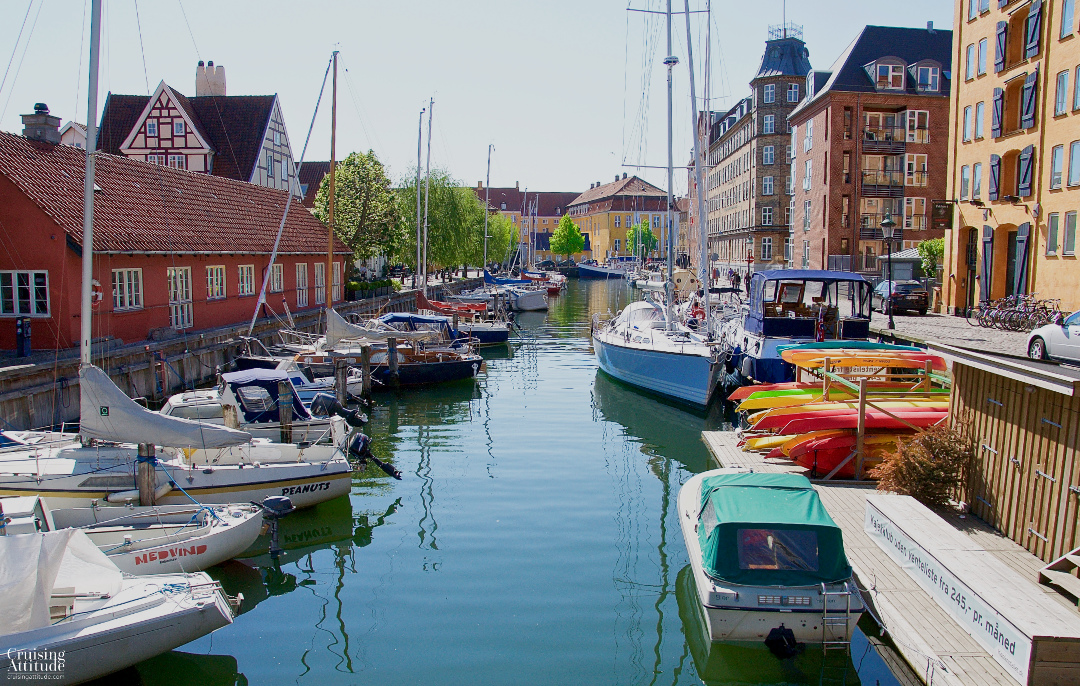 Yet another marina in Christianshavn

Afterwards, we had  lunch on the sunny terrace at Almanak, part of the restaurant group housed in “The Standard” building.  The lunchtime smørrebrød is fantastic and we can recommend the superb dinner menu as well.  We had dinner there last summer. 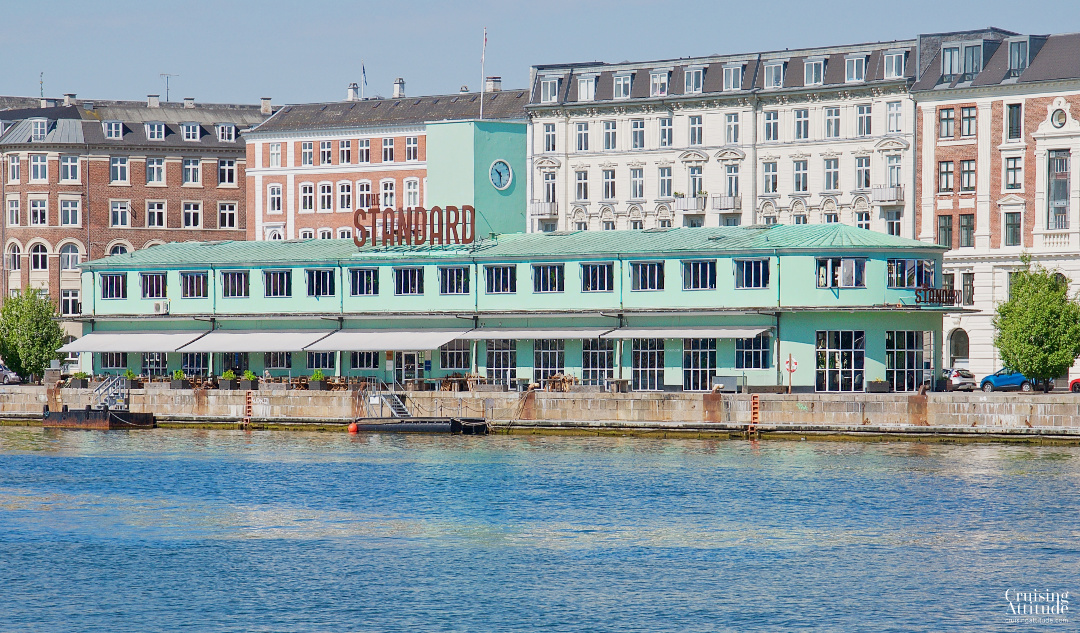 “The Standard” houses the restaurants “Almanak”, “Studio” and “Verandah” 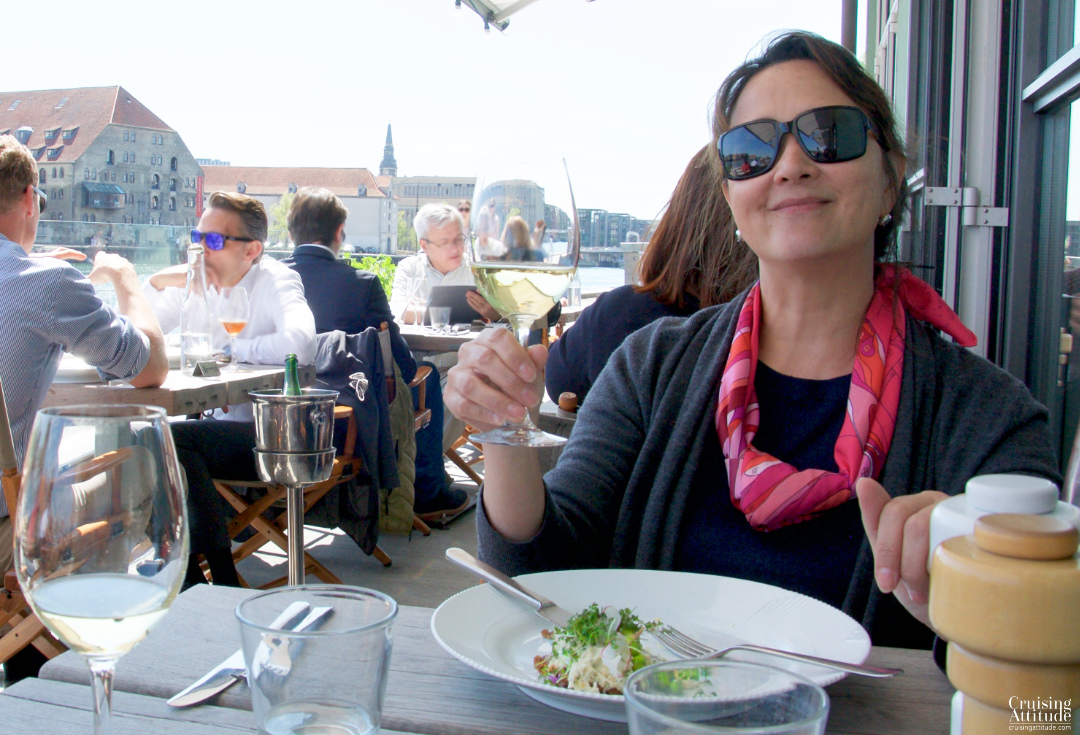 Lunch at Almanak in Copenhagen

The next day, we did the shopping thing and hit the Strøget area.  The Strøget is Copenhagen’s pedestrian shopping street and includes most of  the major Danish brands and Design houses.  Ilum, Illums Bolighus, Georg Jenssen and Royal Copenhagen are all here.   We had lunch at Café Europa which turned out to be a nice surprise.  We weren’t expecting the food to be so good as it’s located just at the Amagertorv square.  Usually, restaurants that are well-located don’t have to try hard to get people in the door, so the food quality and the service suffers.  Not in this case.  We had a delicious 3-plate smørrebrød menu and the service was quick and friendly.  Then it was back to the metro before the 15.30 “bicycle curfew” and back to the marina and our dog, Senna.

Luckily, she’s used to us leaving during the day (for work) so she usually sleeps while we’re away.  We’ve been leaving her on the boat  for about 4 hours with no problem at all, as long she gets a long walk before we leave. And of course a long walk when we get back to the boat.  It hasn’t been very warm in Copenhagen, around 18 degrees, so if we leave all of the smaller windows open, it’s not hot in the boat. We leave a couple of fans running for Senna as well.

Day four was a rainy one, so we decided to walk to the National Aquarium, “Den Blå Planet” (the Blue Planet). It’s a large aquarium that’s a breath-taking architectural masterpiece in itself.  Five different wings show five different water environments, such as the deep oceans, the amazon jungle, coral reefs, or the baltic sea.  It’s well worth a visit on a rainy day.

We bicycled to Slottsholmen on day 5.  The tiny island of Slottsholmen is home to the former royal residence of the kings and queens of Denmark, Christianborg palace. It’s quite a huge place to visit, so you can buy tickets for the entire palace, including the stables, or for just some of it.  We opted for the royal kitchens and the ruins underneath the palace, this time around.  The ruins are fascinating because the tour tells the history of the palace, from it’s humble beginnings in the 11th century, through to the 20th century.  The palace was torn down and built up as a bigger and better version several times. It was also victim of fires three times in its more recent history and had to be built up again from its rubble.

We spent our last day just strolling through the streets of the city center and bicycling through Nyhavn, basking in it’s ambience, its cosiness. We had lunch at the fish restaurant on the top floor of the Illum department store — not bad but not the same standard as Almanak or Café Europa. 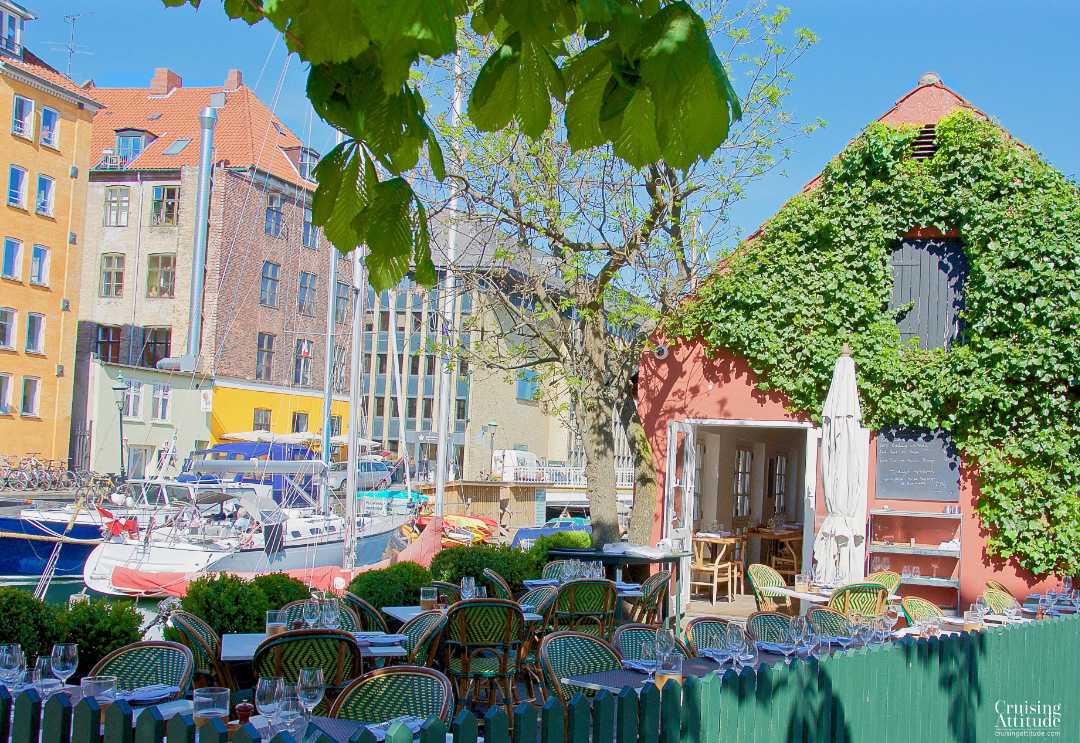 Charming little outdoor restaurant next to one of the canals 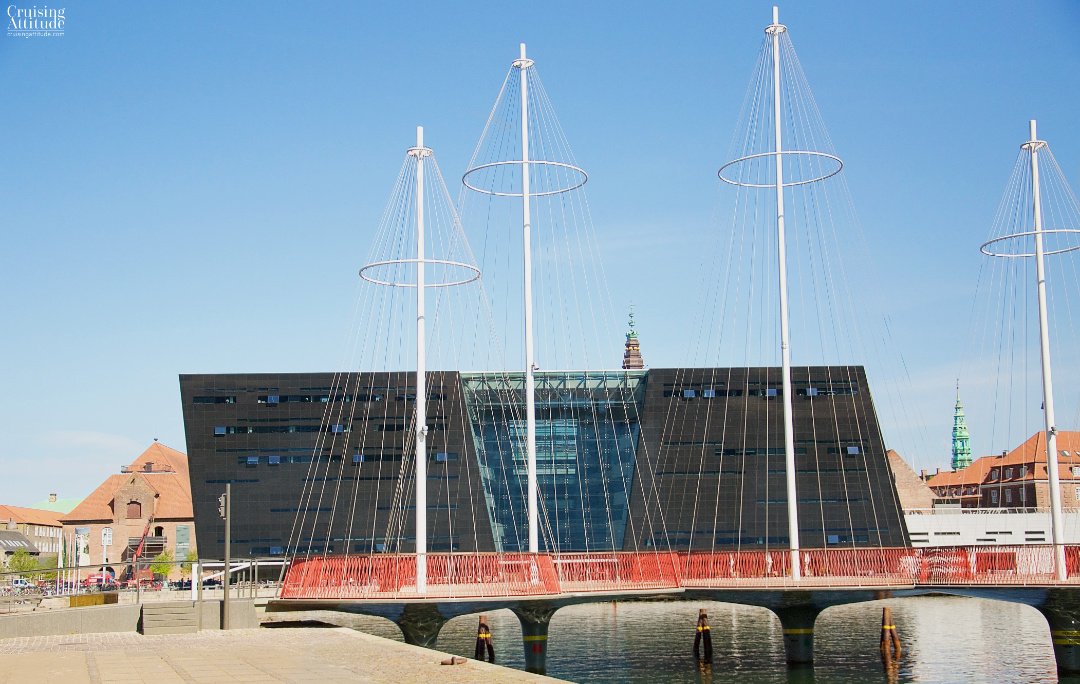 View of the architectural masterpiece the “Black Diamond” library and national photo museum. 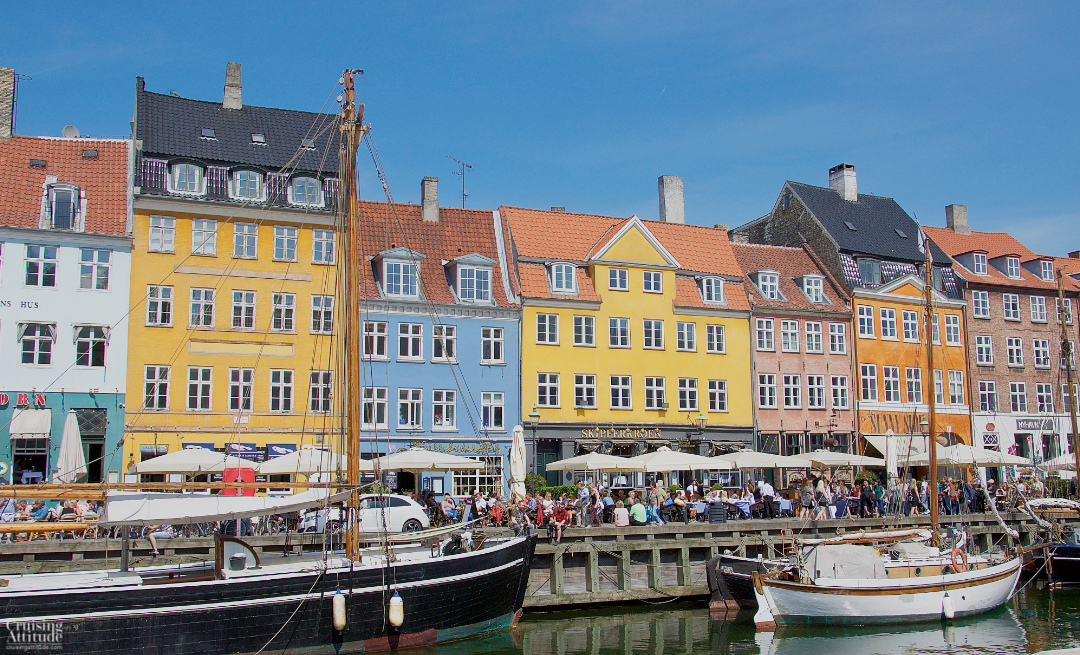 It’s easy to see why Nyhavn is one of the most popular social spots of Copenhagen. 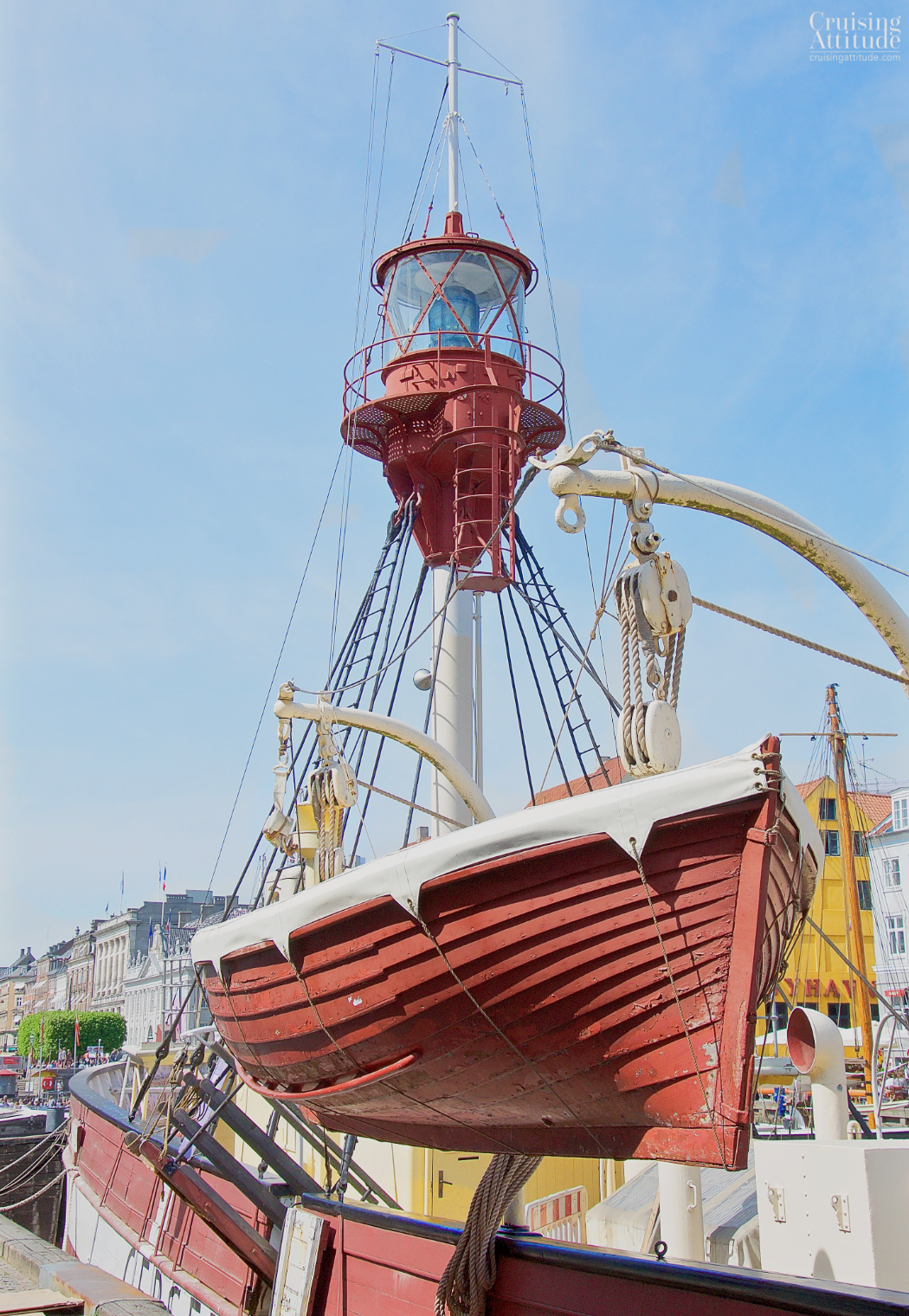 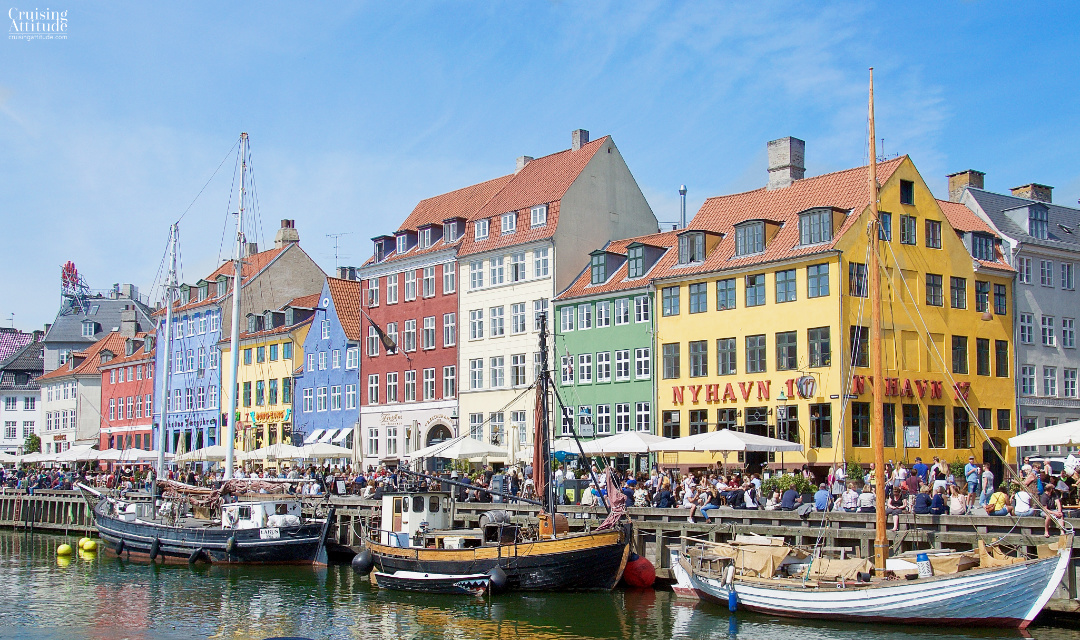 Nyhavn on a bright and beautiful afternoon 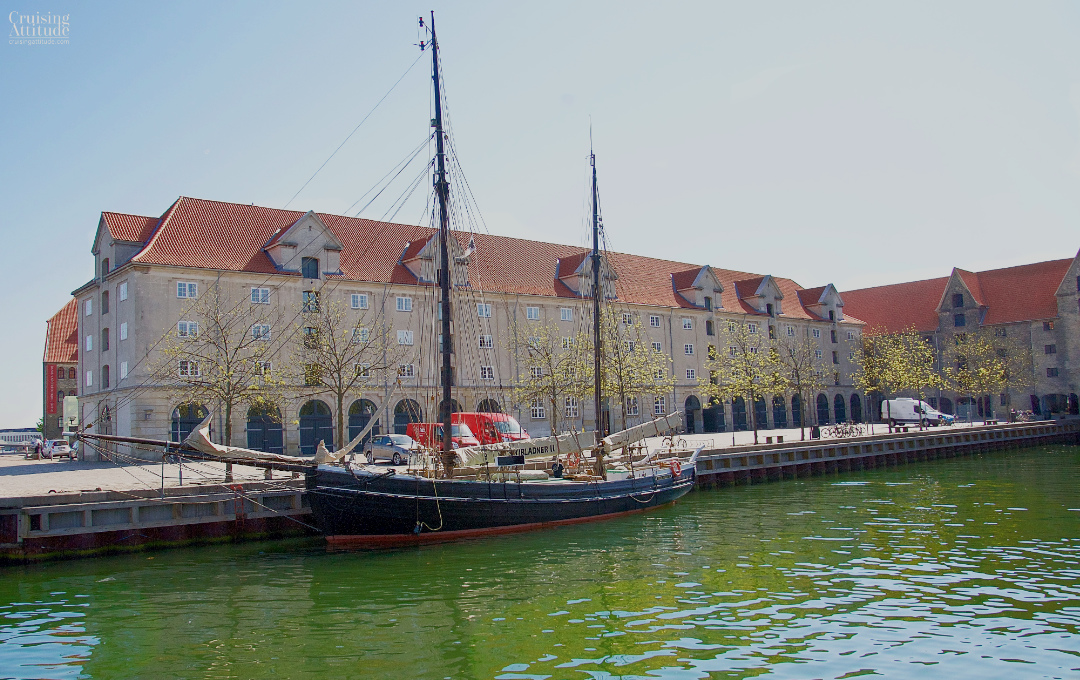 One of the many renovated former harbour depots in Christianshavn 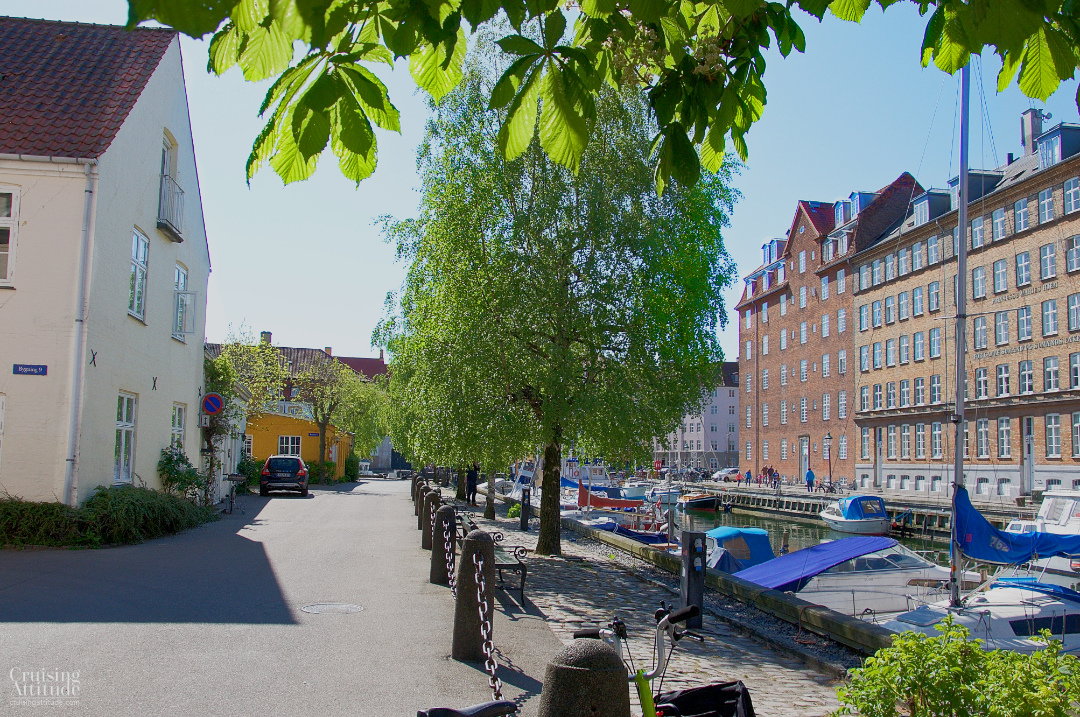 A beautiful morning in cosy Copenhagen 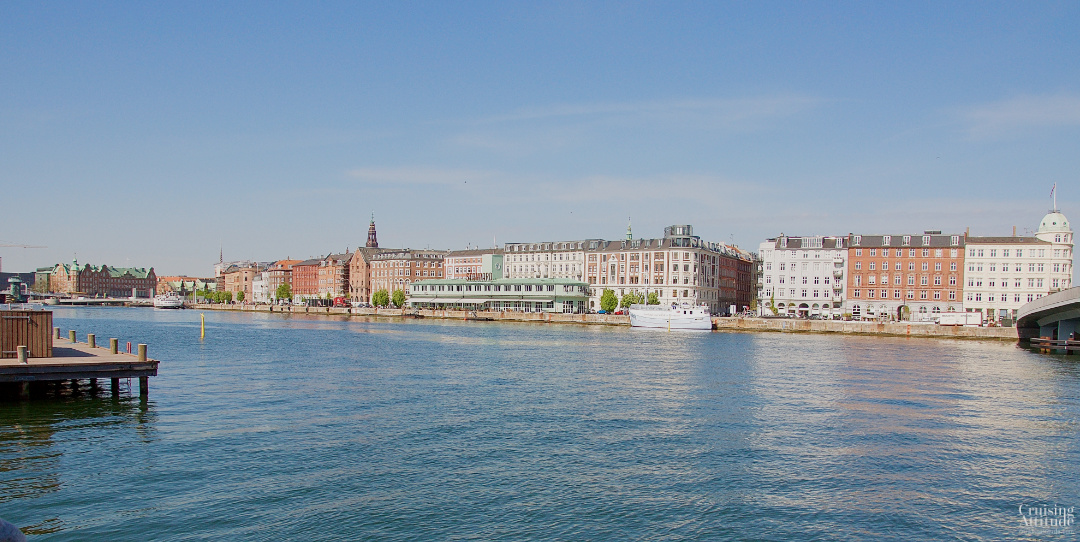 Panorama of Copenhagen’s inner city from the Christianshavn district

Tomorrow morning, we will set off for Møns Klint, one of the most famous Danish landmarks, and the marina Klintholm

Even though Copenhagen has a number of marinas, even a few  in the center of town, we chose the one in Kastrup because it was the most dog-friendly.

Located near the National Aquarium and just a 12-minute metro ride into the center of Copenhagen, it provided us with the best of both worlds — the space for dog walking and playing and nearness to the city.  In addition, it’s located next to Copenhagen’s most popular beach, Amager Strand.

It uses the system of green and red places — your can used any place marked green (meaning the owner will not be back for at least three days).  When in doubt, you can ask at the marina office.  We arrived early enough to get a place for our boat, which is no mean feat. There is only one place in the marina for a boat that’s 55 feet (17 meters) long.  This is the biggest disadvantage of having a long boat.  You can’t just fit in anywhere like a 36 or even 40 footer.