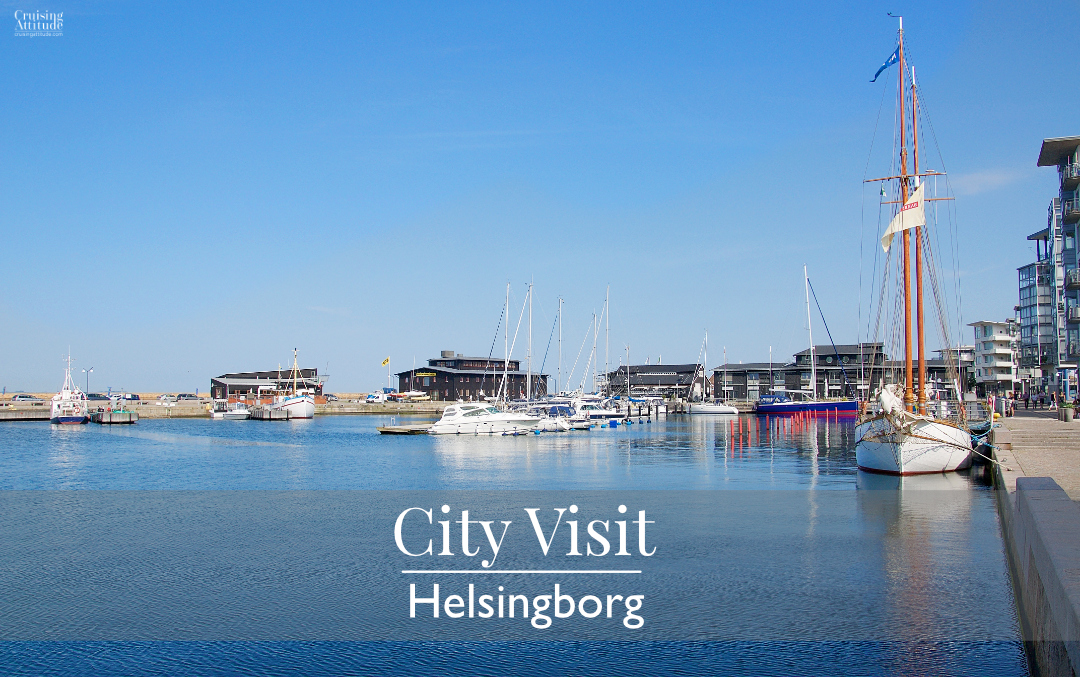 It was only a 4-hour sail from Gilleleje to Helsingborg, even with weak winds that accompanied a strong high pressure system.  It was suddenly hot — 32°C — which for Sweden is sweltering. The sun shone out of a clear blue sky, surprising, given the dark thunderstorms we observed on the Sweden coast from across the Oresund. 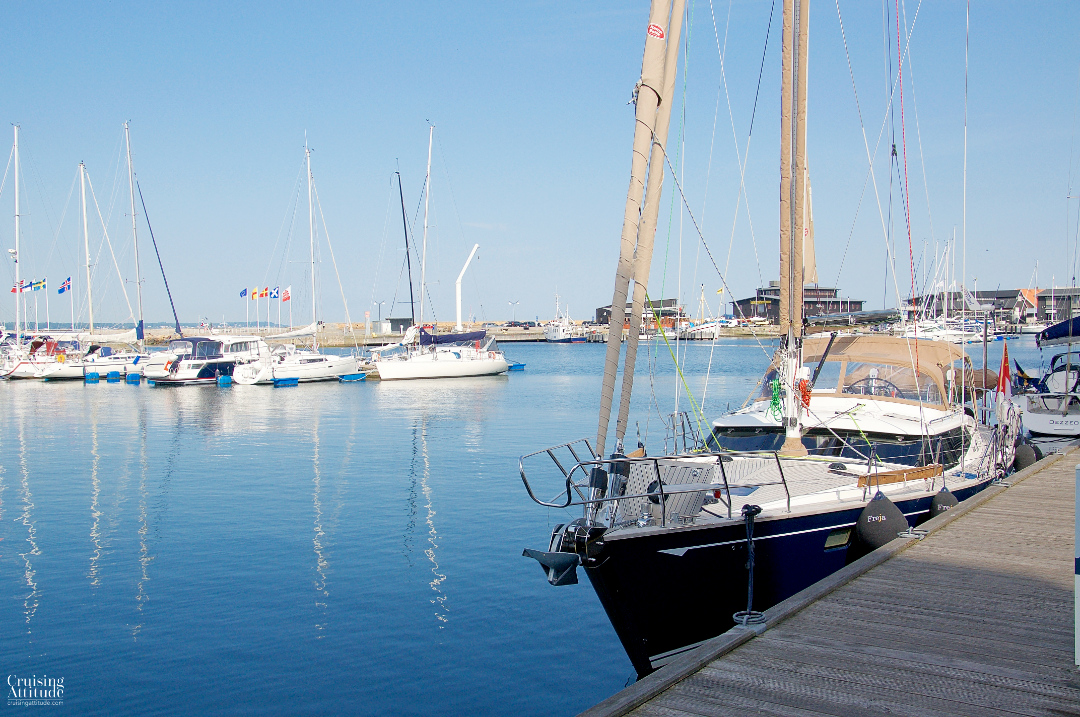 The recently built north harbour is the guest marina for pleasure boats. It’s in a new area of town consisting of beautifully architected condominiums and parks. The ground floor of each building houses either restaurants, cafés, shops or offices, so there’s quite a lot of “life” here.  It’s not an area where the apartments empty out in the morning leaving a “dead zone” during the day. 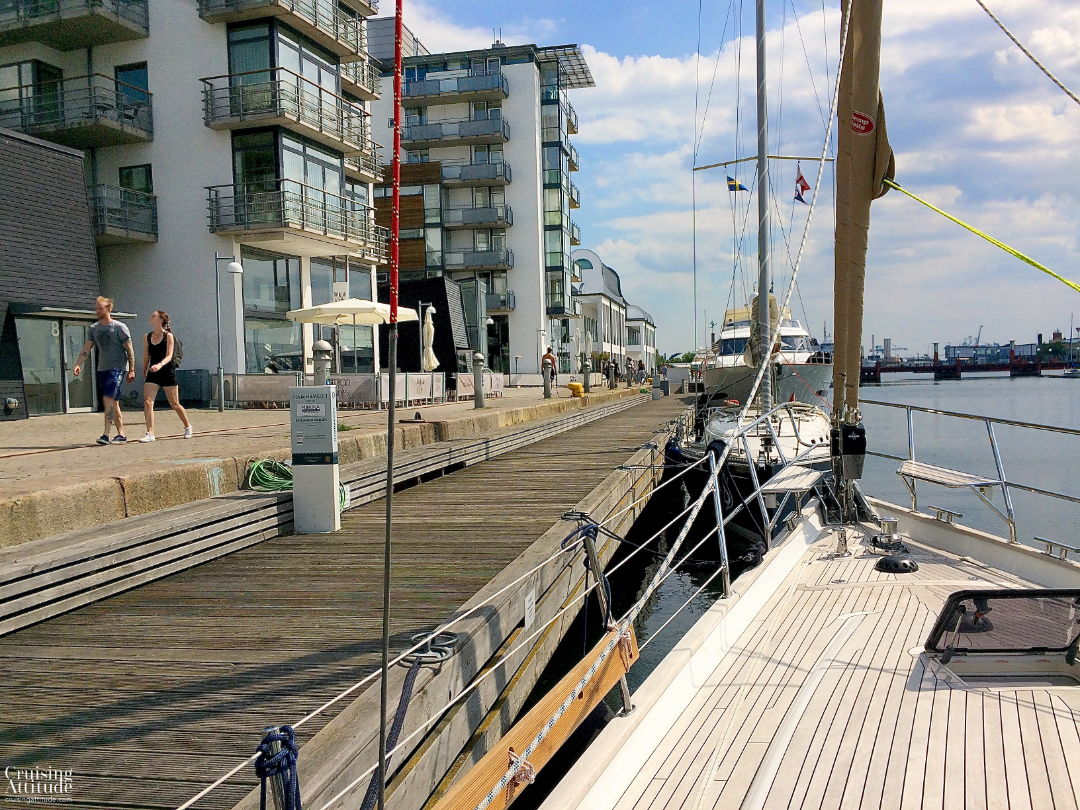 Some examples of the wonderful architecture at the marina i Helsingborg

Mooring in the guest harbour is either alongside (announced for boats 12 meters or more) or between booms for 12 meters and less.  We arrived early enough find a reasonably good spot. 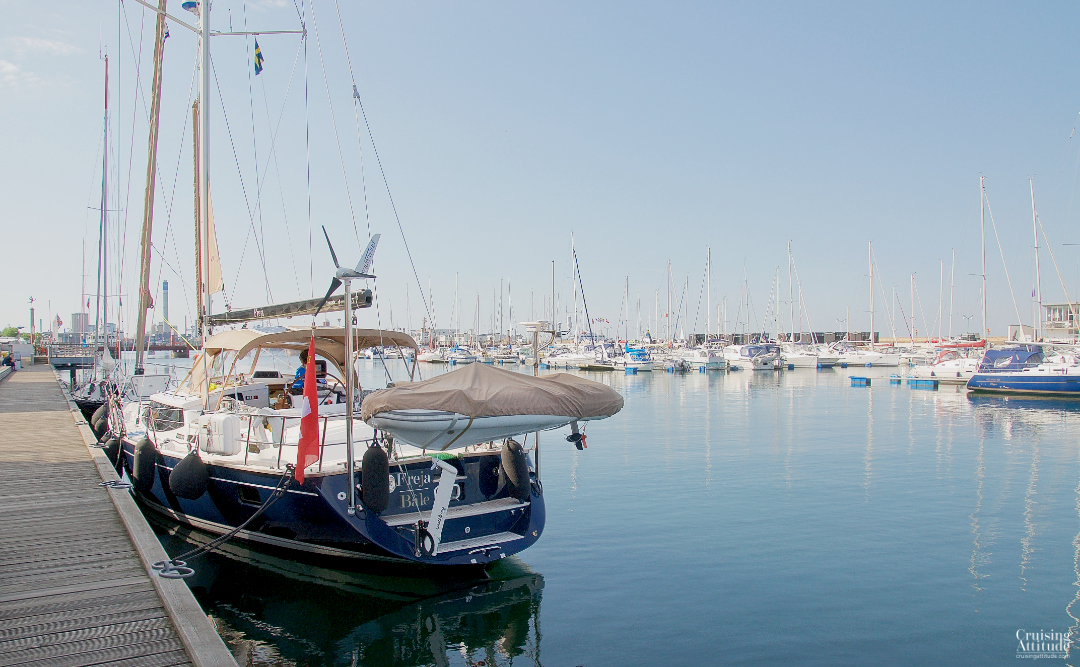 View of the southern end of the marina

The first thing we did after securely mooring the boat was to turn on the air conditioning.  We needed to do some shopping so Senna needed to stay in the boat.  We are so happy we ordered air conditioning — for our dog’s sake.  A hot boat can be as bad as a hot car.  We were happy we could just dial in 22°C in our cabin and leave Senna there.  Using only the rear cabin air conditioning uses just 8 amps so the 16 amps we had as shore power was more than adequate. 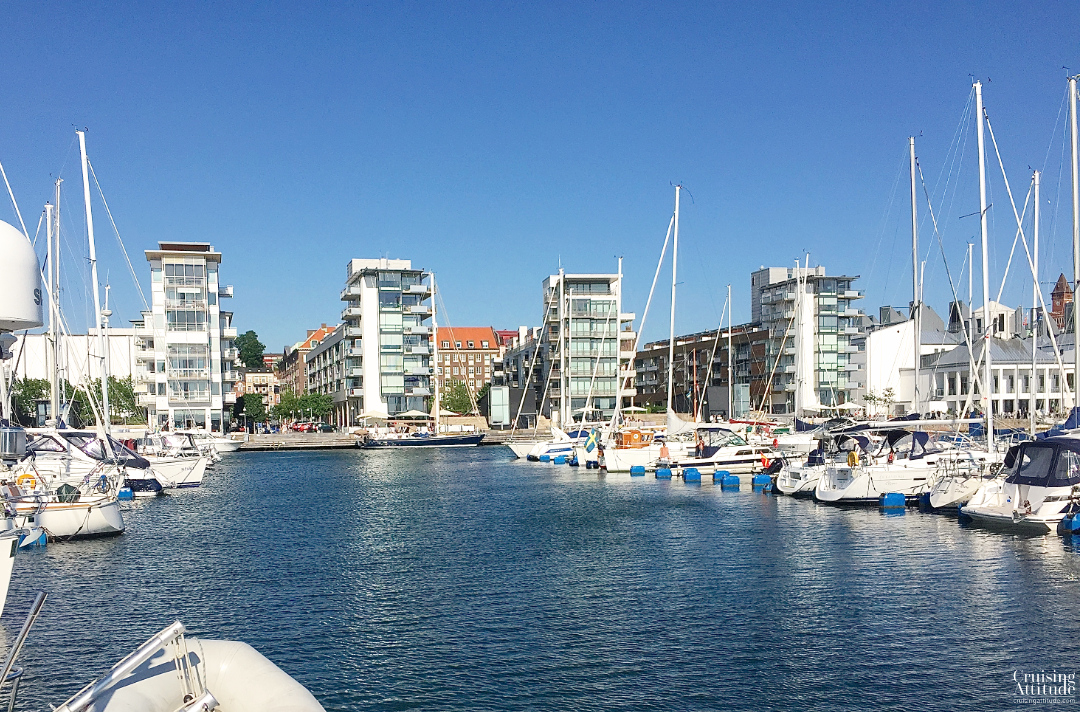 Freja moored at the marina in Helsingborg.

Helsingborg is a really pleasant small city just across the sound from Helsingør Denmark.  This is where most of the Denmark-Sweden ferry traffic is, as it’s such a short distance.  The ferries take about a half-hour to make the jump.  They could make the trip quicker but that would mean the passengers would not have enough time to do their tax-free shopping.  The ferries are more like floating shopping malls than anything else — that’s how they really make their money. 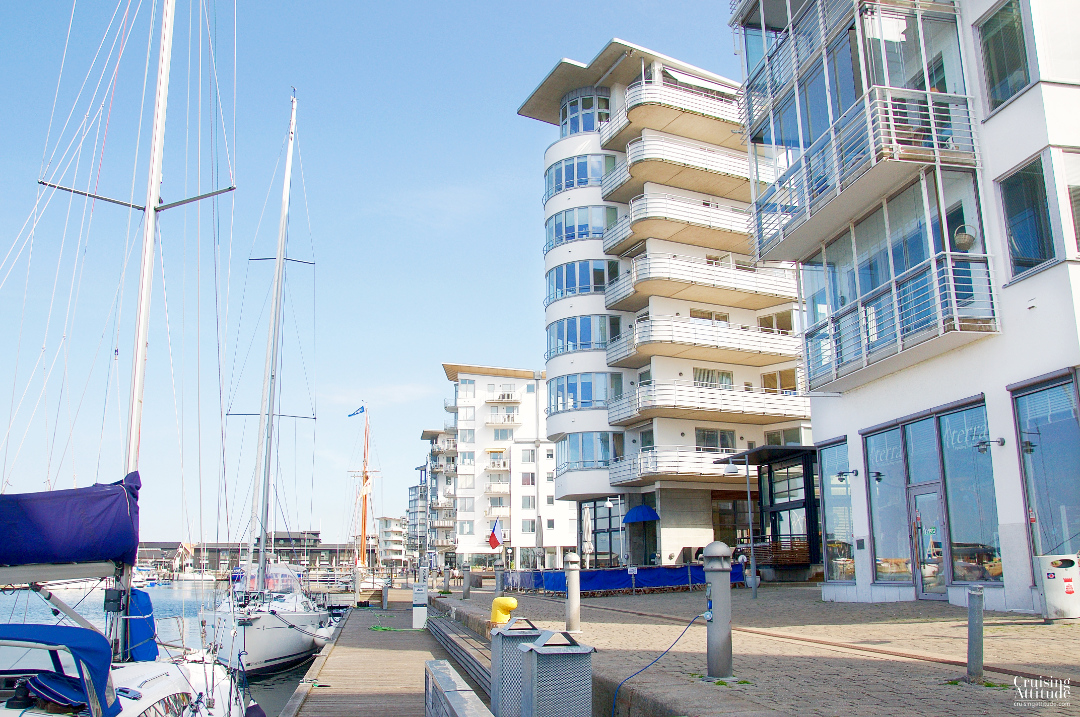 Another view of the “inhabitant-friendly” architecture at the marina

Shopping and eating in Helsingborg

But we were off to do some shopping in Helsingborg, not the ride the ferry.  First stop — groceries.  We found a small ICA shop near the marina that had most of what we needed.  A good thing to know about Sweden is that most grocery shops function as post offices, so you can buy stamps and send/receive letters and packages.

We then continued on to the best bakery – pastry shop – café in town, Fahlmans.  Fahlmans has just the best artisanal thin knäckebröd (Swedish crisp bread)!  We bought 8 packets so that we could have some for the next couple of weeks.  We also bought some artisanal rye and sourdough bread.  Fahlmans is also a great place to have a cup of coffee and watch the world go by.  They have a large outdoor terrace during the summer months.

Next stop, the Peter Beier chocolate boutique on Södra Storgatan, where we almost cleaned out the shop. Just kidding, but we did buy a lot of chocolate, especially the 88% cocoa medallions.  Danish Peter Beijer makes possibly the best artisan chocolate in Europe (and we’ve tasted plenty of chocolate as we live in Switzerland).  They have their own plantation in the Dominican Republic and all of their chocolate comes from beans grown there. 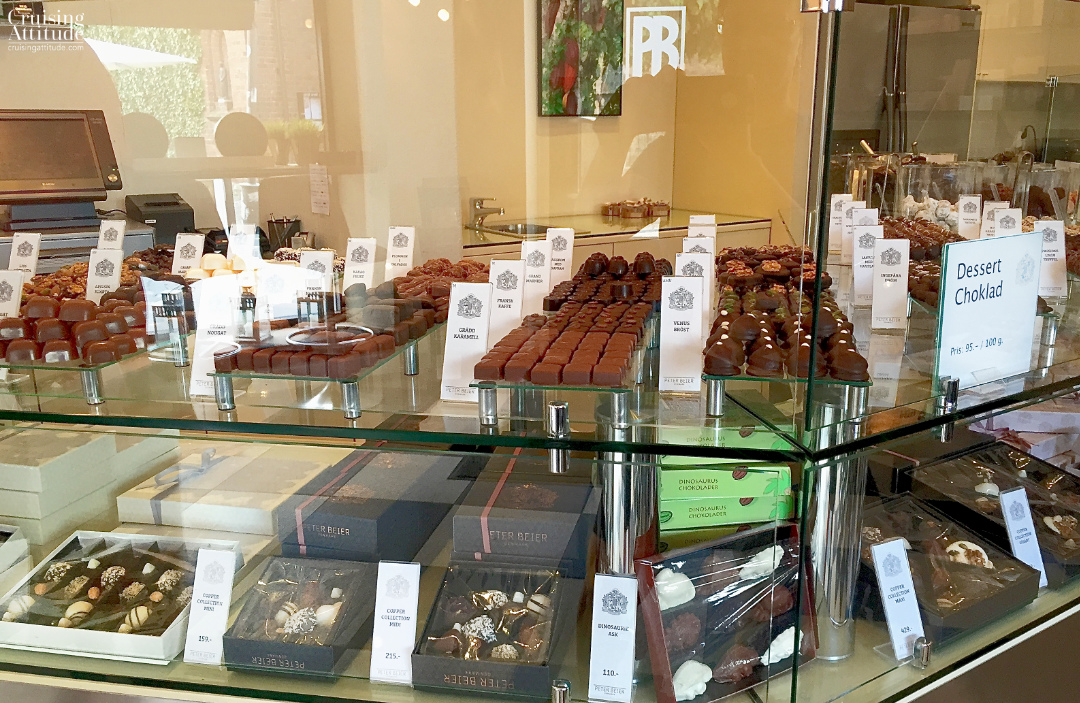 Jacques also managed to find a salon for a haircut.  There are salons everywhere,  including hipster-style barbershops, but it was difficult to find one that that had a drop-in slot.  He finally got one at Solid Hair on Kullagatan, and the hairdresser did a great job.

Lastly – a great restaurant tip.  Frida’s restaurant is also on Kullagatan, just 5 minutes away from the marina.  It’s creative, high-level cuisine with mostly local ingredients, presented in a lovely minimalist fashion.  Delicious for the eyes and the palate.  We highly recommend it! 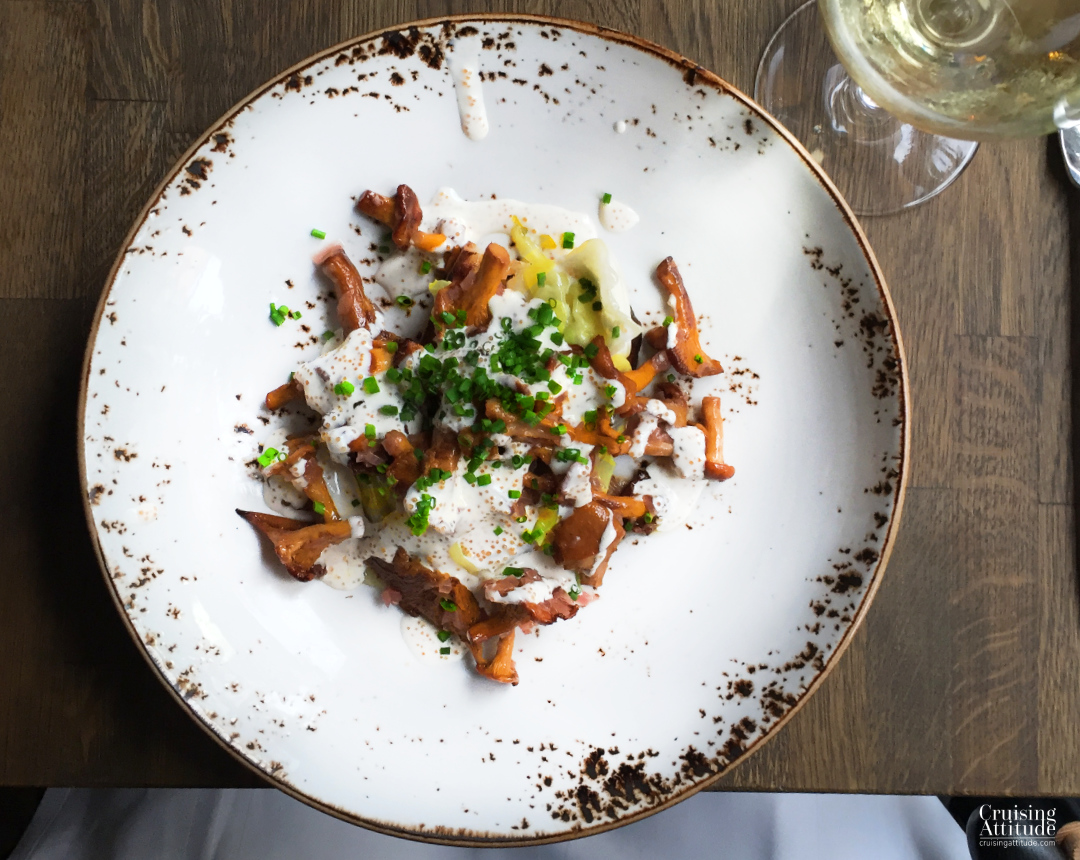 Toast with chanterelles sautéed in butter, löjrom (a type of caviar), ciboulettes and sour cream at Frida’s Restaurant 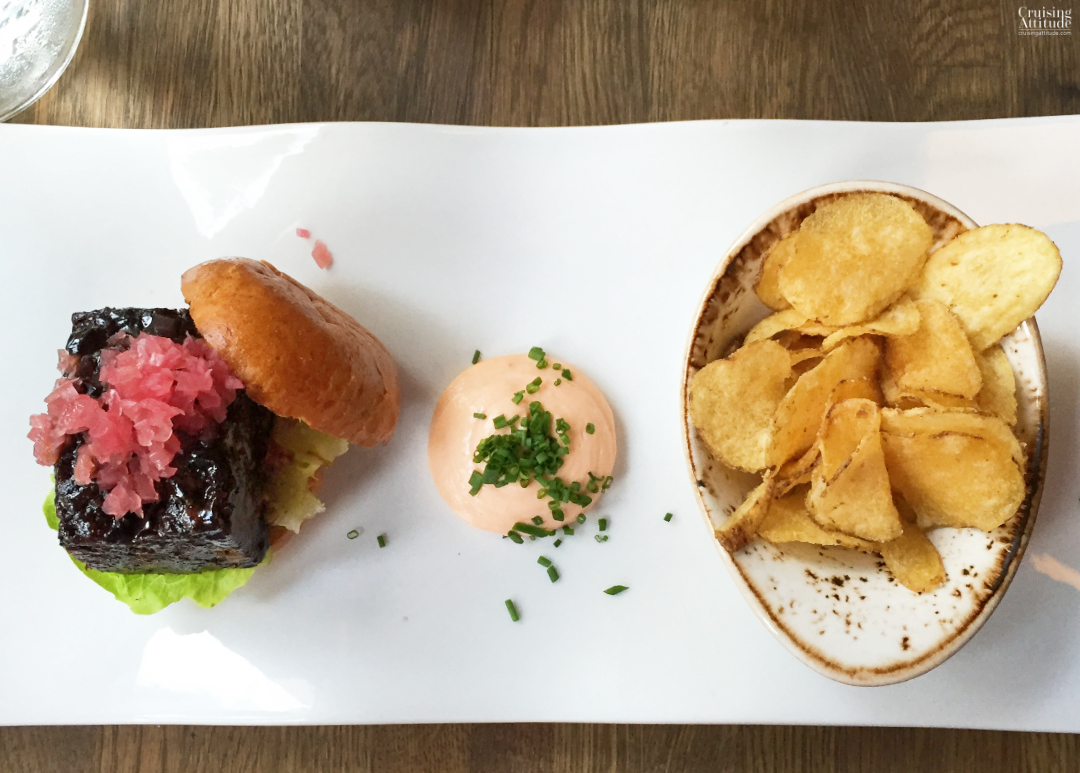 Frida’s version of a hamburger and french fries 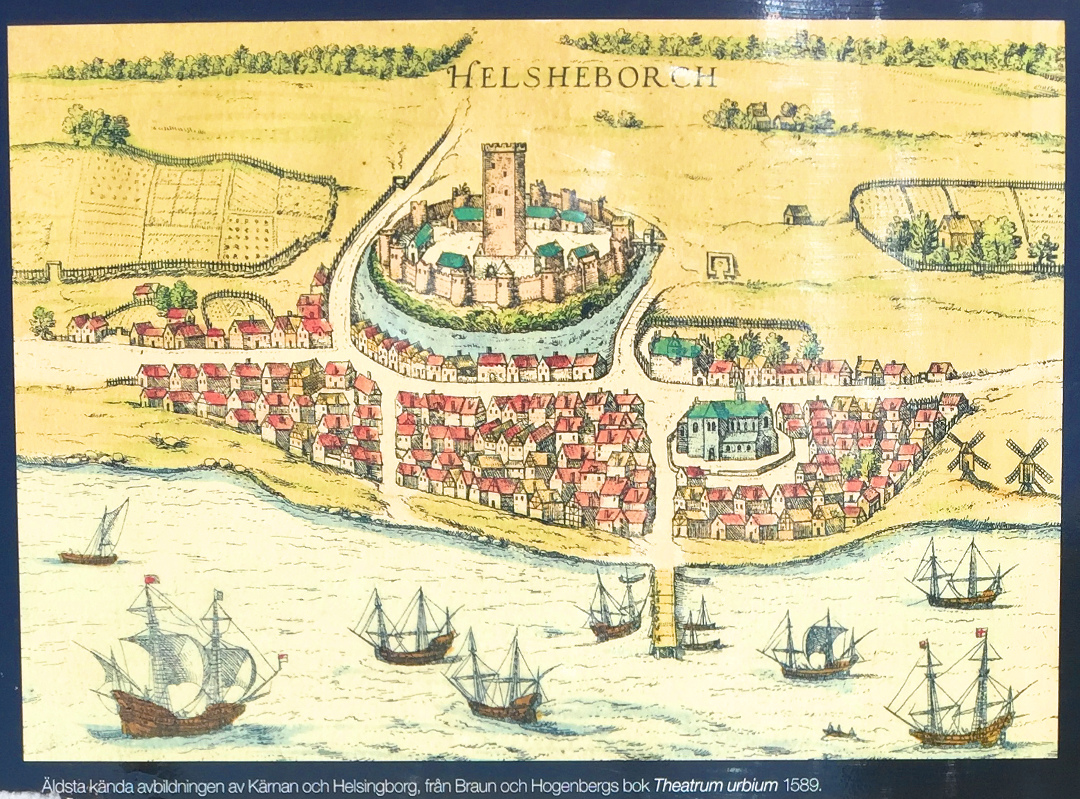 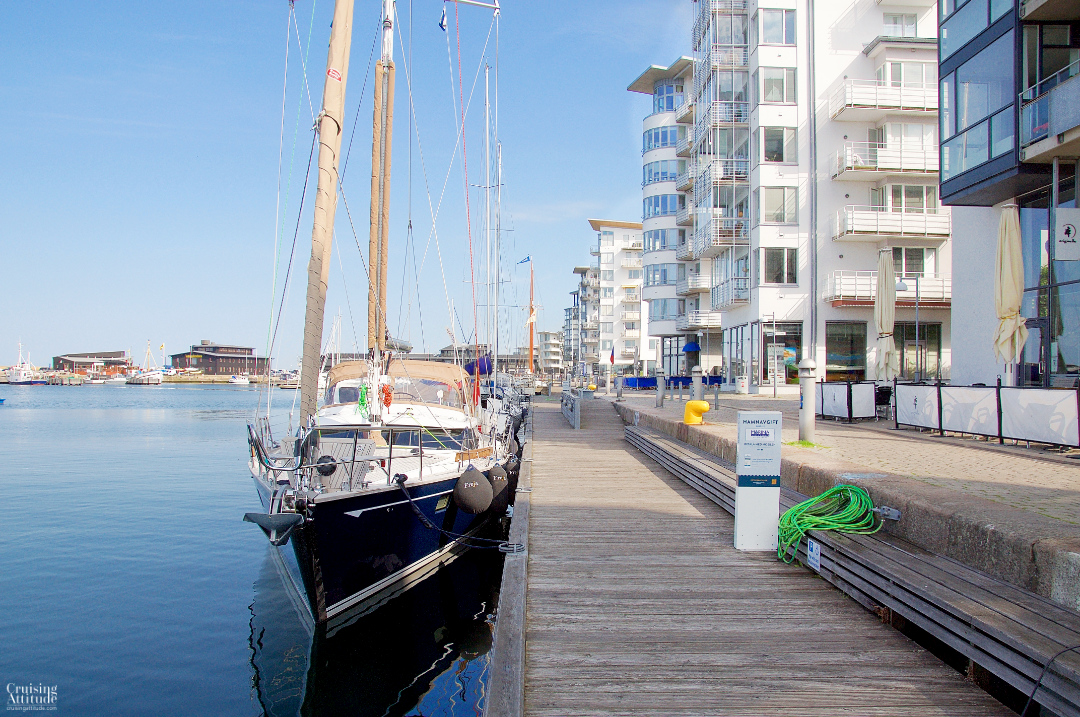 The “boardwalk” along the marina in Helsingborg. It leads to a long beach area towards the north.