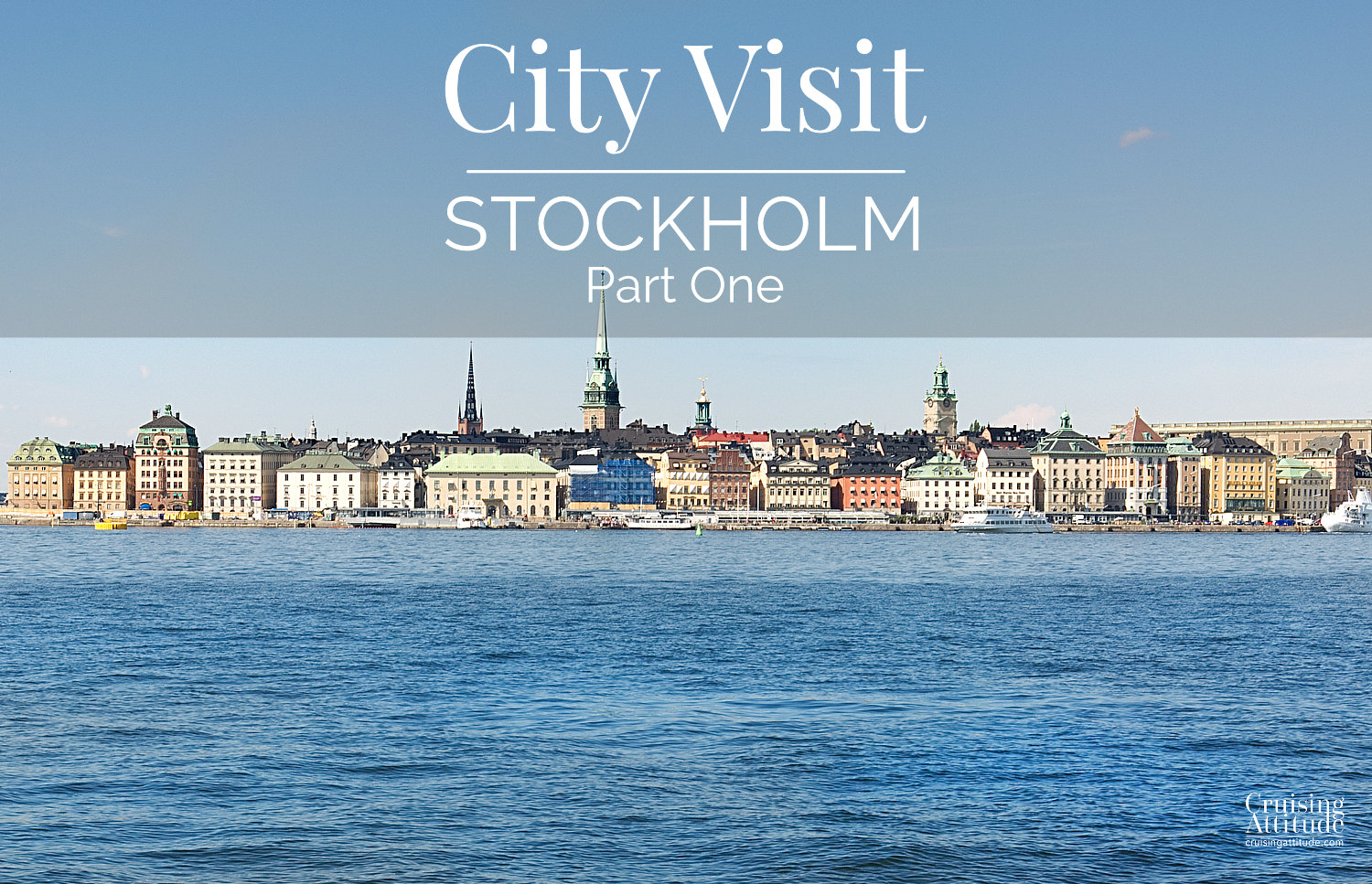 I hate using the word “attraction”. It sounds like I’m referring to a theme park like Disneyland. But the places that I cover in the post are attractions because they attract enormous amounts of visitors.  So think of them that way and not the “Disneyland” way.

If you’ve never been to Stockholm, you can buy a “Stockholm Pass” that gives you entry to 60 top attractions, including most of the ones on the list below. It also includes rides on the sightseeing buses and boats.

Getting There: Public Transportation in the Stockholm Area

If you think you’ll be using a lot of public transportation (no bikes oboard or don’t think biking is much fun), you can also buy a travel card for 24-72 hours.  See this site for all of the ways to pay for public transportation. There’s even an app for that!  Please be aware that you can’t buy tickets with cash or credit card, so have a look at the site.  Jacques and I bought the SL Access Cards that you charge with money at special charging stations (like an automatic teller machine).

I won’t go into excruciating detail on the Vasa Museum (you’ll find pages of descriptions on various websites including their own).  But you just cannot miss this museum if you come to Stockholm.  It is Scandinavia’s most-visited museum and the only preserved 17th-century ship in the world.  The best part about the museum, besides the ship itself, are the exhibits showing you the lifestyle of Stockholm in the 17th century – how people worked and lived — with dioramas and special effects. 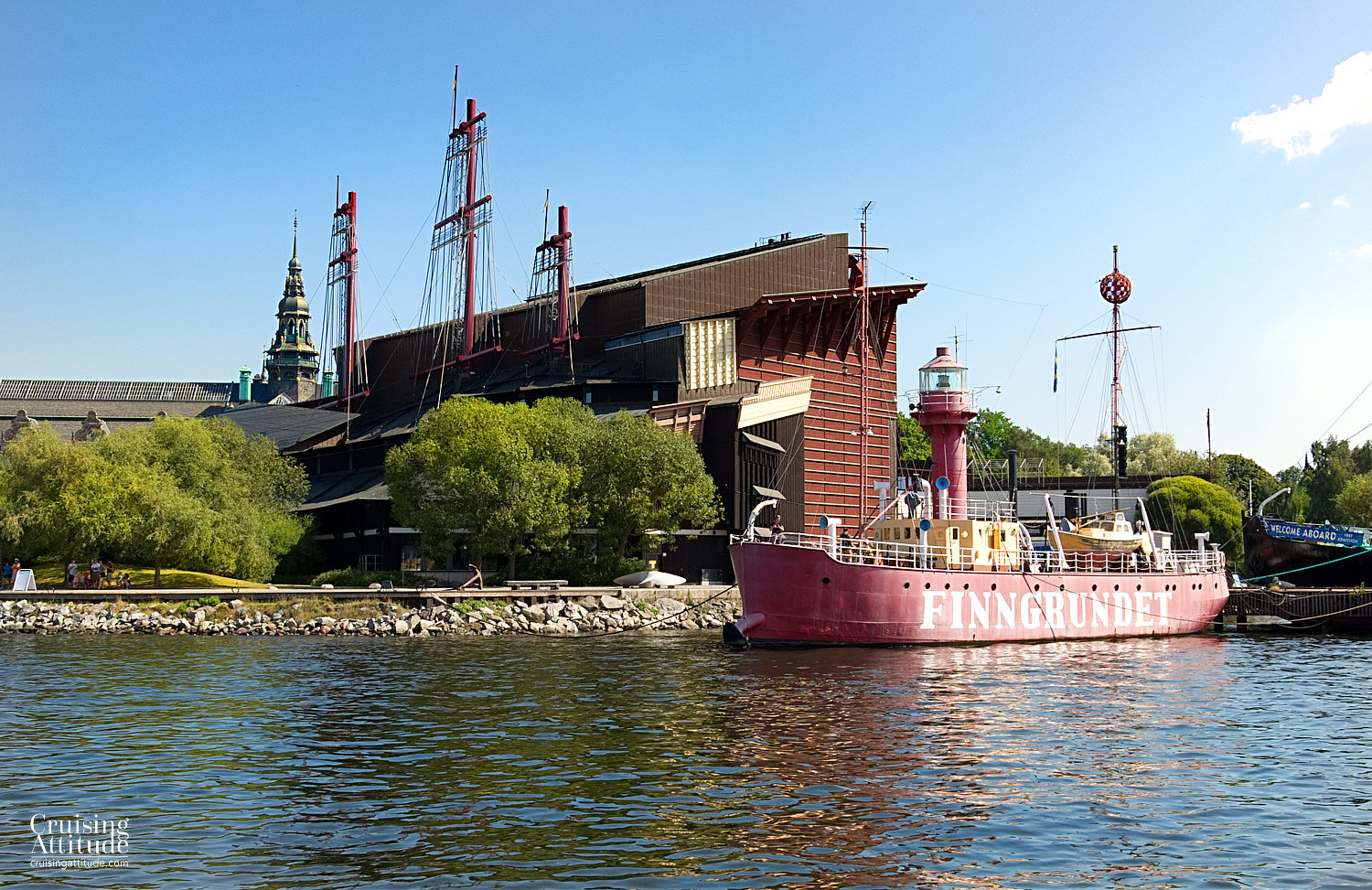 A view of the Vasa Museum from the water. In the foreground you see the old lighthouse ship “Finngrundet”. 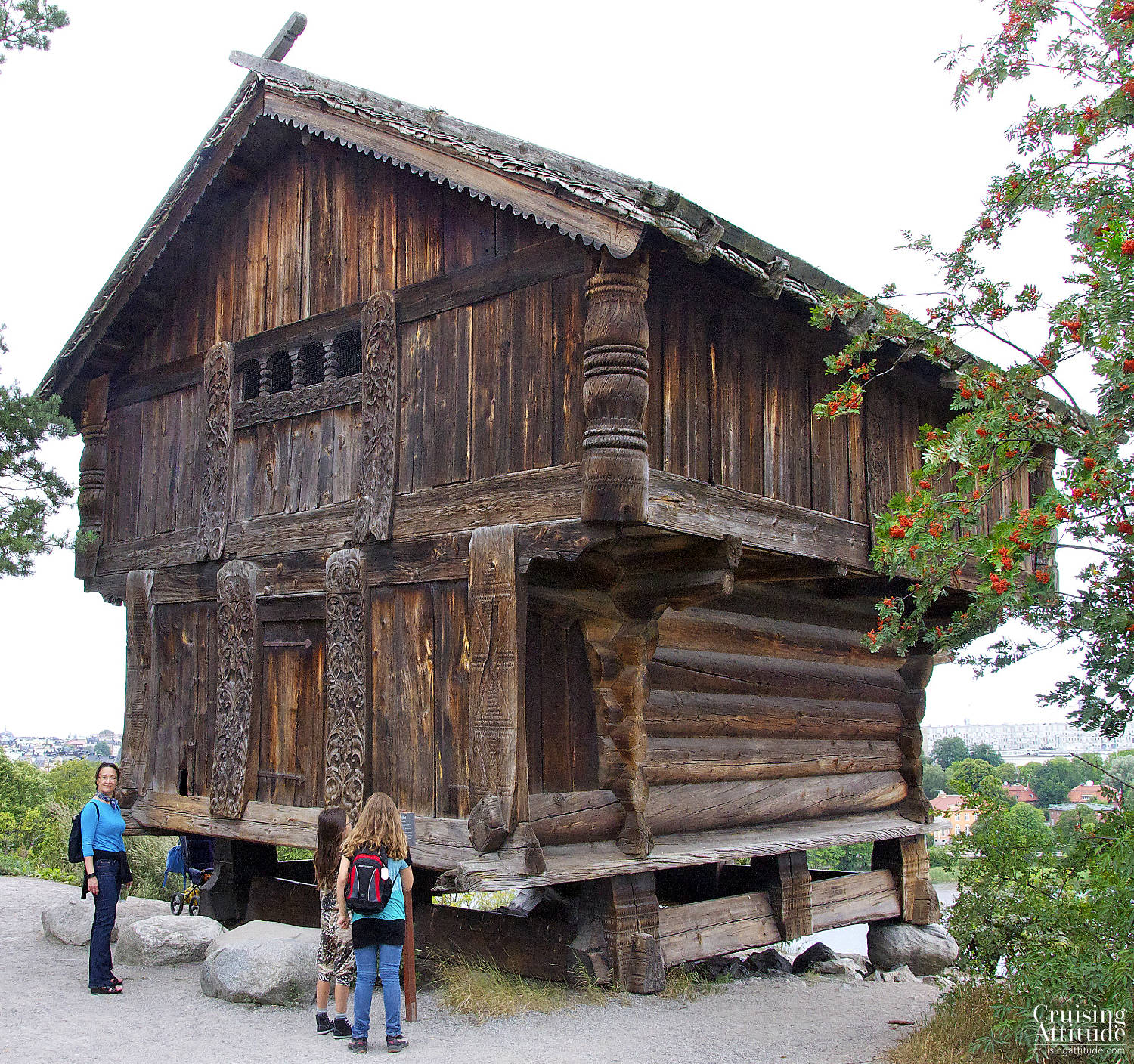 One of the antique houses at the Skansen Open-Air Museum 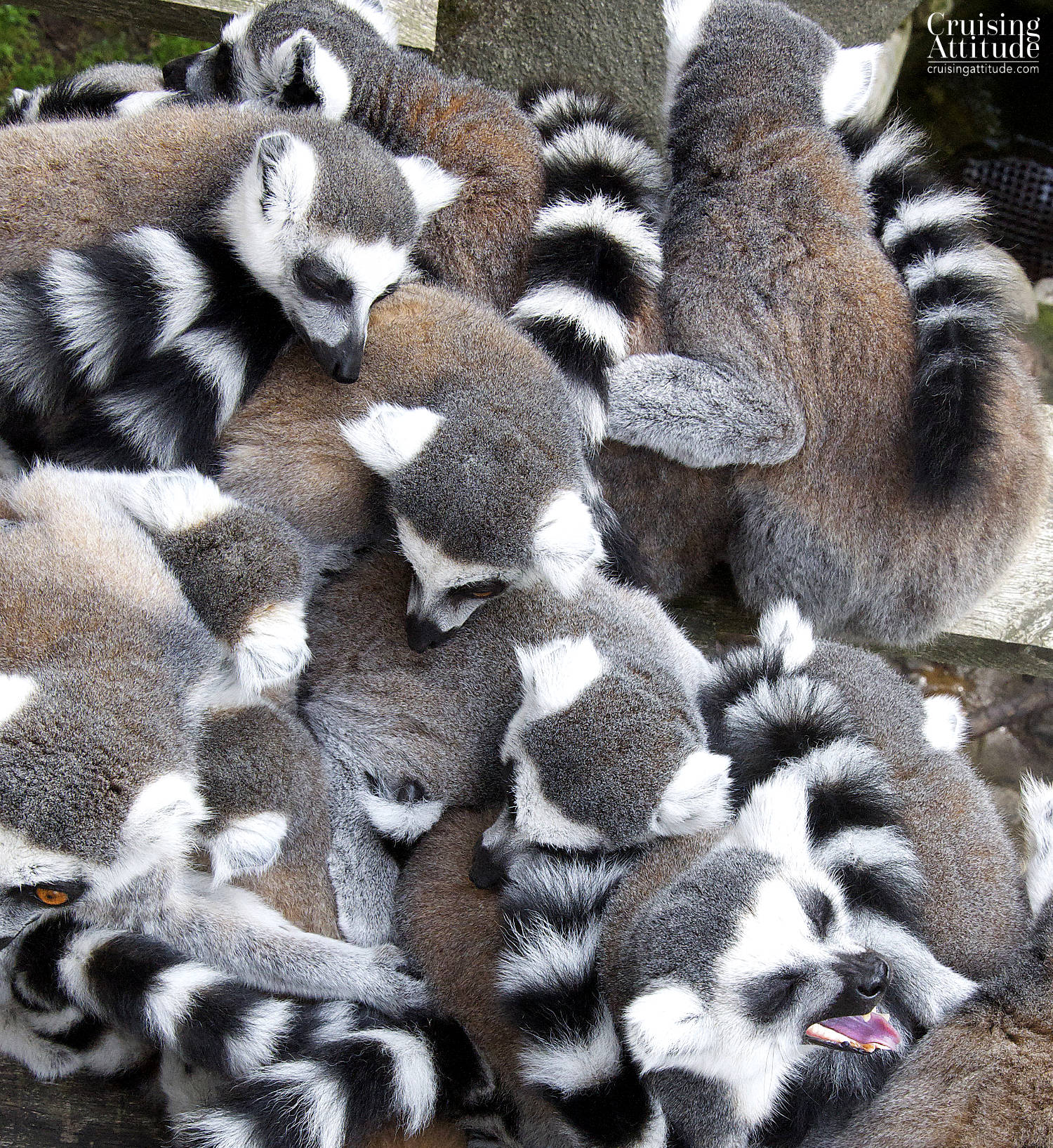 Ring-tailed Lemurs having their afternoon siesta at Skansen Aquarium

The open-air museum of Skansen shows you, in real life, the swedish lifestyle throughout five centuries.  It was founded back in 1891 and consists of real buildings and houses that were found all over Sweden and moved to the site of Skansen.  You see working glass-blowers, millers, bakers, carpenters, etc. from the time period of the building they occupy.  Skansen also has a small zoo featuring the animals native to Sweden as well as a small aquarium.  We love it!

The Medeltidsmuseet (Medieval museum) is similar to the Wasa Museum in that it features a series of buildings and rooms depicting life (in this case, life during the middle ages in Stockholm). It’s not just a series of glass cases with artefacts — it’s an almost real-life exhibition. The museum is built around an actual excavation and began with the discovery of the ancient town wall of Stockholm, built in the 1500’s.

If you enjoy modern art, you’ll have to visit the Stockholm Museum of Modern Art.  It has one of the biggest collections of modern art in Europe. It’s located on beautiful Skeppsholmen, worth a stroll or bike ride in itself.  If you’re hungry while you’re there, the restaurant/café is quite good. 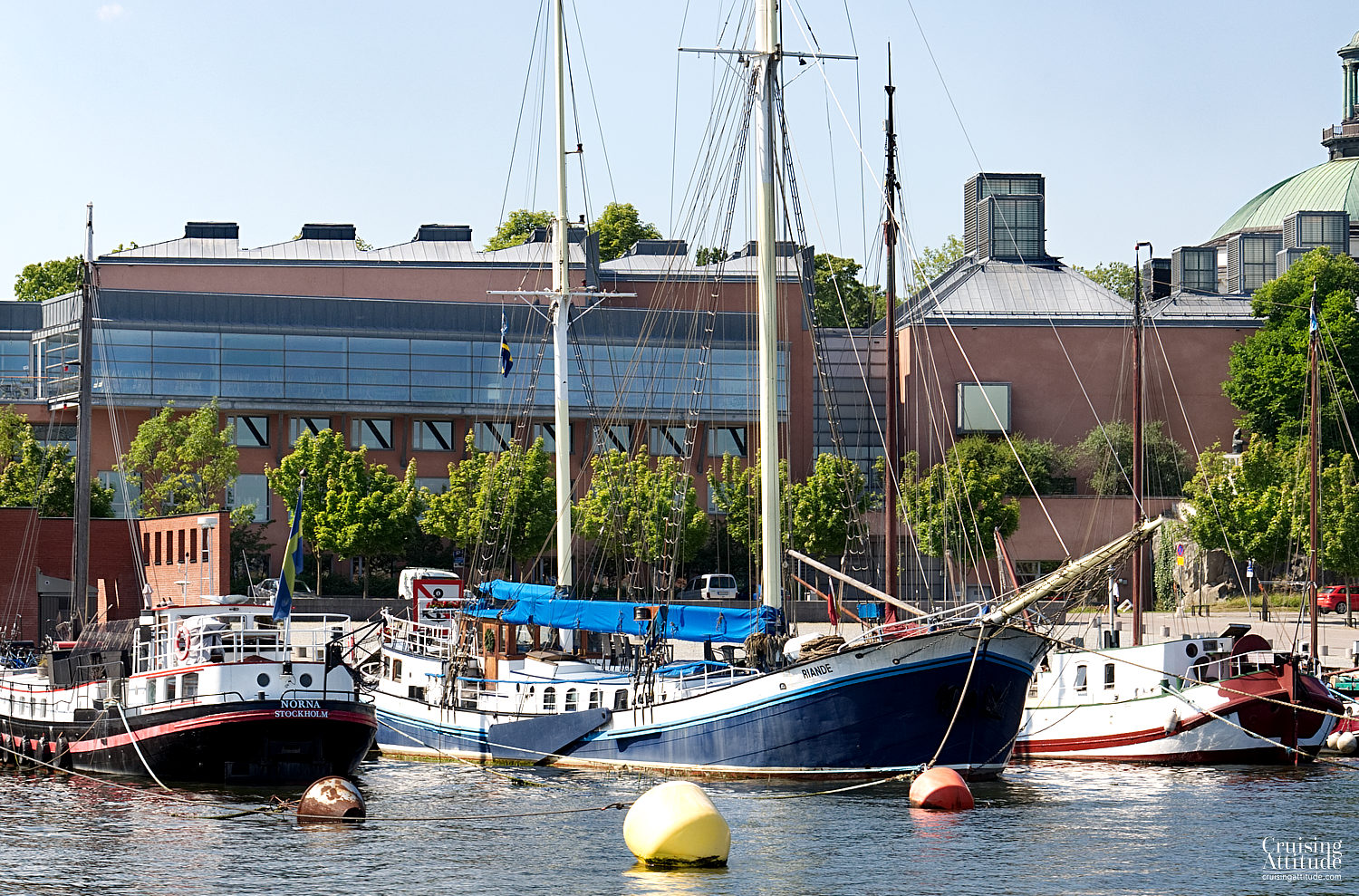 View of the Museum of Modern Art from the water.

Housed in a beautiful former maritime customs building, the Photography Museum (Fotografiska) is a must-visit if you are at all interested in photography.  Some of the world’s most respected photographers and photojournalists have exhibited here.  Some names you may recognise are Annie Lebowitz, Herb Ritts, Bryan Adams, and Lennart Nilsson.

The restaurant is fabulous here. We really enjoyed the summer terrace as it was a hot and sunny day.  It’s an ecological restaurant that put the vegetables and fruits into focus, rather than the meat.  In other words, you chose your vegetables first and then the meat or fish you think would go with them.  It’s amazing how delicious vegetables can be when you add a bit of creativity! 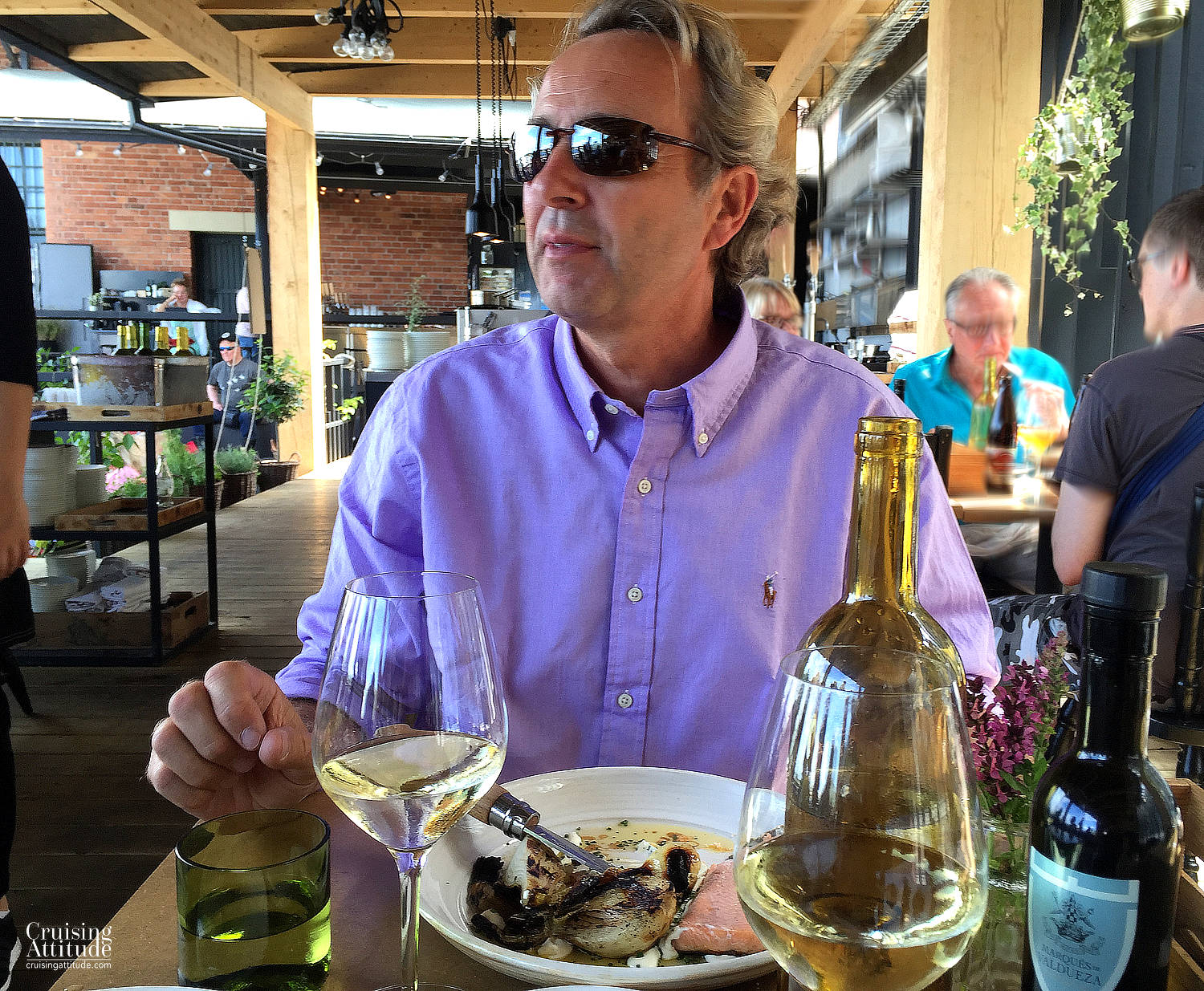 Restaurant at the Fotografiska, under the pergola.

The Kaknäs Tower is a television/radio tower located on Djurgården.  I assume it’s not really used for TV and radio anymore as we now have satellite and internet radio and TV.  A new restaurant has opened on the 38th floor and there’s now a Sky bar on the top floor (41st).  The Sky bar has the best view of Stockholm — it’s 150 meters up.  You can see all the way to Lake Mälar towards the west and  far out to the archipelago towards the east from here. If you want to take some good photos, you can ask for the key to open small “photography covers” in the protection barrier around the tower.

The Drottningholm Palace is where the king and queen really live (the royal castle in the old town is now a museum).  As the royal family are housed in the south wing only, the rest of the palace is open to the public as a museum.  If you’re a history buff or castle enthusiast , you’ll appreciate  the well-preserved paintings, furniture, sculptures and architecture of the era. The palace was built during the 1600s by the renowned architect Nicodemus Tessin the Elder,  and was subsequently renovated throughout its history. 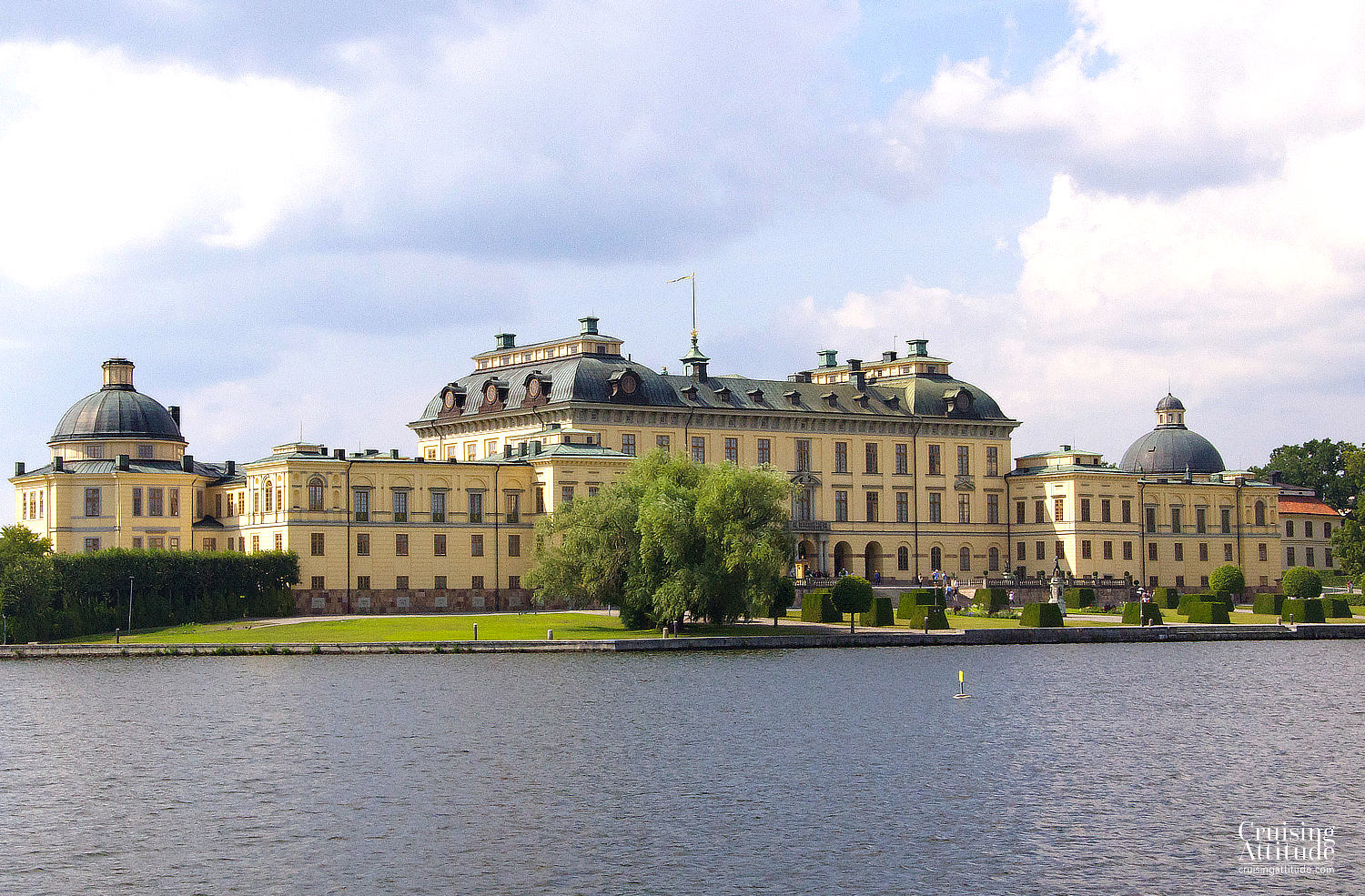 View of the front side of Drottningholm Palace from lake Mälaren

The gardens behind the Palace are huge. The central part is more a french style, quite stylised. The exterior parts were designed as an english park — a romantic countryside  with ancient oak trees and small brooks and ponds. It makes you think of Jane Austen and it’s a lovely place for a champagne picnic!

The most pleasant way to get to the Palace is by steamboat (Ströma Kanalbolaget boats leave from the City Hall Quai).  If you’re in good shape, it’s also a pleasant bike ride.  Otherwise, you can take the subway to Brommaplan and then the bus to Drottningholm. See the public transport planner here.

Nr. 8: The Royal Castle in the Old Town

The royal castle in the Old Town, is not the most beautiful castle in Europe, but with it’s 600 rooms and several floors, it’s full of things to see.  Start with the royal treasury to see crowns, sceptres, swords, ancient coins and the jewels sometimes worn by the queen or the princesses.

Then go through the Royal apartments to seen the staterooms used for official events, meetings, banquets and balls.   Continue to the The Kronor Museum, when you’ll see models of the original (and more beautiful) original castle.  This castle, called “Tre Kronor” (Three Crowns), burned down in a voracious fire in 1697.

The Nordic Museum is a stone’s through from the Wasa Marina and the Wasa Museum and is well worth a visit.  Its exhibitions cover various aspects of the nordic countries’  histories and  lifestyles. Exhibitions cover things like clothing styles throughout the ages, arts and crafts, what kinds of food was eaten, housing and the birth of the “peoples’ home” (modern and well-equipped housing for the working class Swedes).  There’s also a permanent exhibition covering the history and culture of the Sami people of the north of Norway, Sweden and Finland. 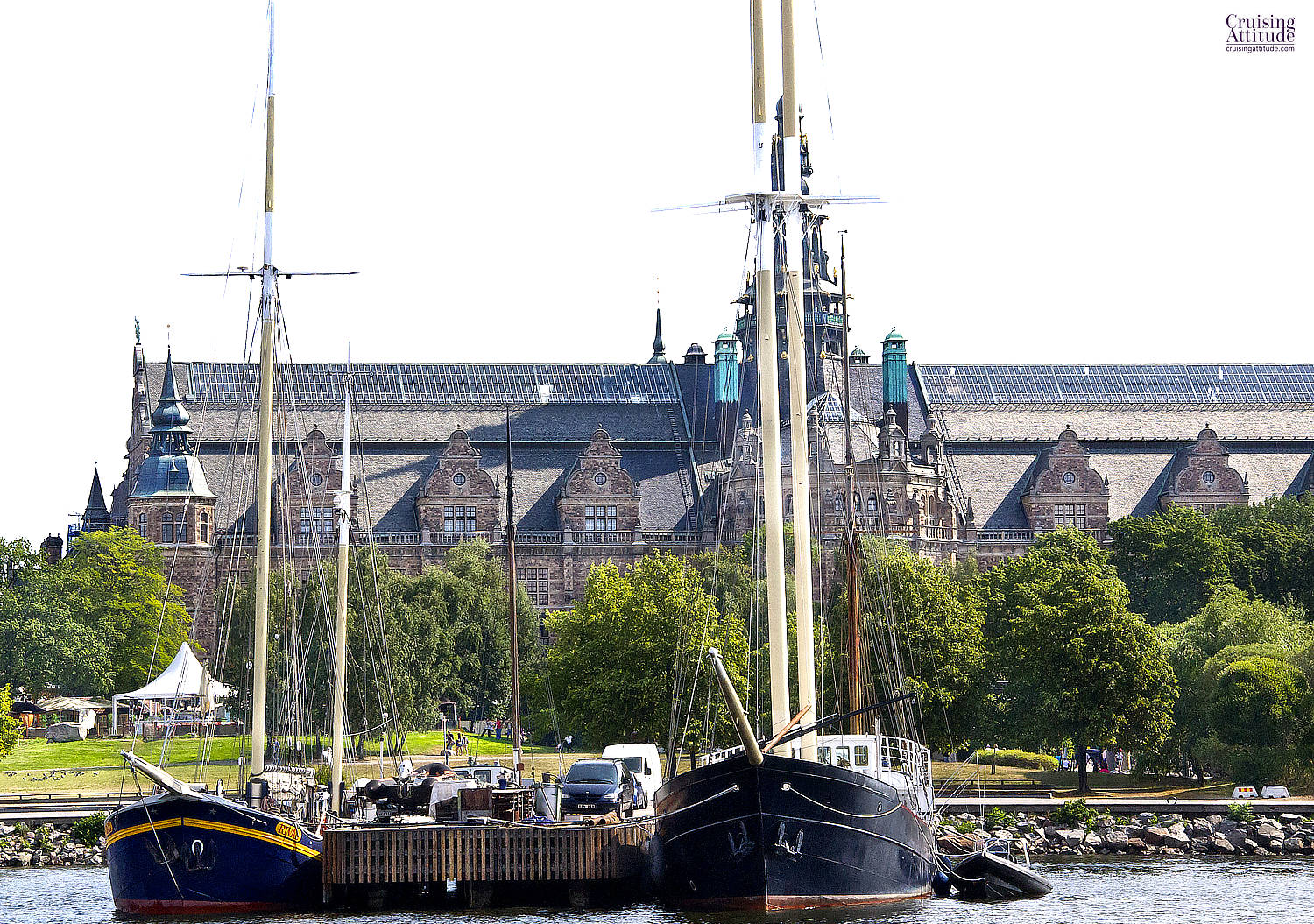 The Nordic Museum seen from the water.

Jacques and I love to visit aquaria around the world. Though the Aquaria Water Museum isn’t the largest one we’ve ever seen, it’s interesting in that the waters around Sweden are well-covered.  You’ll see what lives under your boat! The various marine environments you’ll see here are “the Rainforest”, “the Mangrove”, “Tropical Seas” and the “Nordic Seas”. 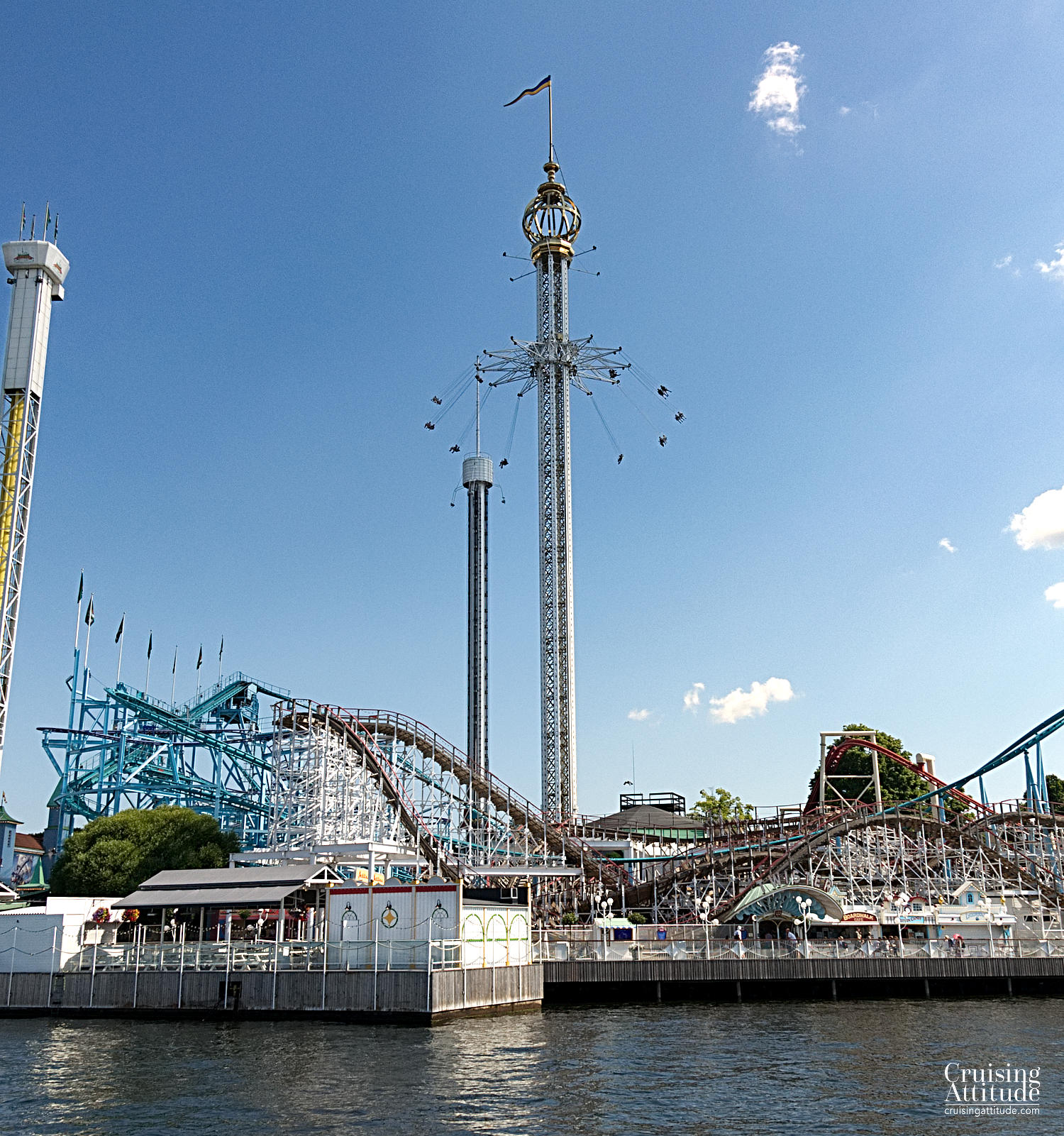 View of Gröna Lund from the water

Gröna Lund is a classic park of attractions with rides you see in just about any western country.  We are not big fans of this sort of thing, but if you have children or teenagers onboard, they’ll probably want to check it out.  There are sometimes great concerts here.

Junibacken is the fairytale and folk story world of Astrid Lindgren brought to life for small children.  Your kids can visit Pippi Longstocking and Emil from Lönneberga.  Perhaps the best way to describe it is “a children’s cultural centre”.  There are different play areas and a Story Train, when you get on a train and go through different parts of Astrid Lindgren’s children’s stories, like you would at Disneyland.   Have a look at this video if you’re wondering if a visit is a good idea for your children.