We cruised the Stockholm Archipelago in 2013 to get some more miles under our belts, in preparation for acquiring our own boat.

The sail from Utö to Munkö was gorgeous, thanks to the beautiful weather and to a guide called “Genväger i Stockholms Skärgård” (Shortcuts in the Stockholm Archipelago).  It shows you little-known passages as alternatives to the “usual” way of getting somewhere.  If you’re in Sweden, and are planning to explore the Stockholm area, I would really recommend it.  Even if you don’t speak Swedish, the overhead photos and diagrams will enable you to follow along (you still need the chart, of course).

This chart shows how most people, out of sheer habit, would make this passage:

Utö to Munkö, the “usual” route

This set of charts shows our route. 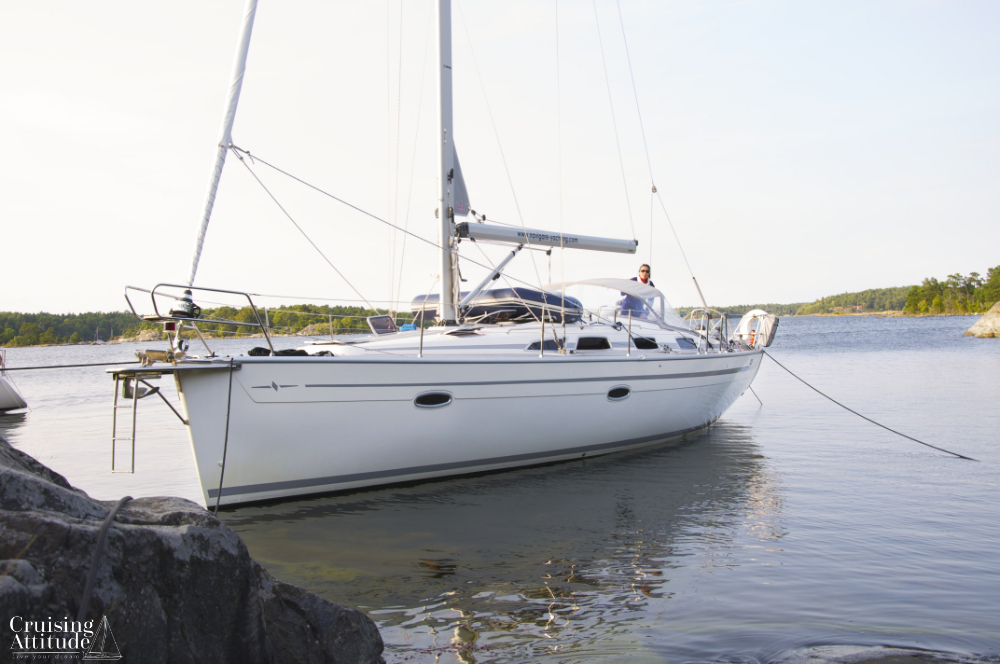 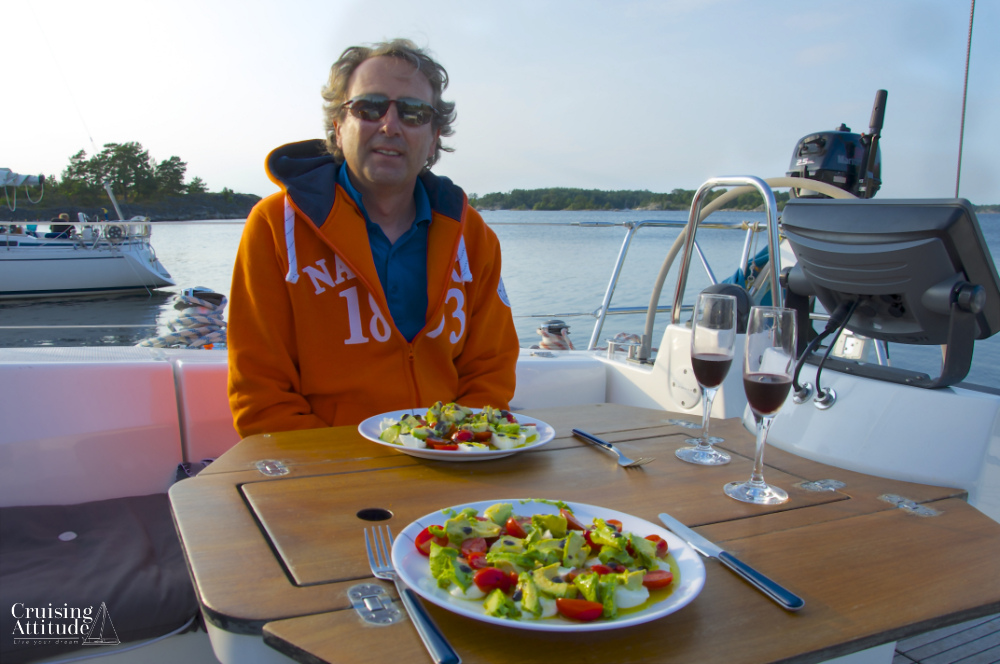 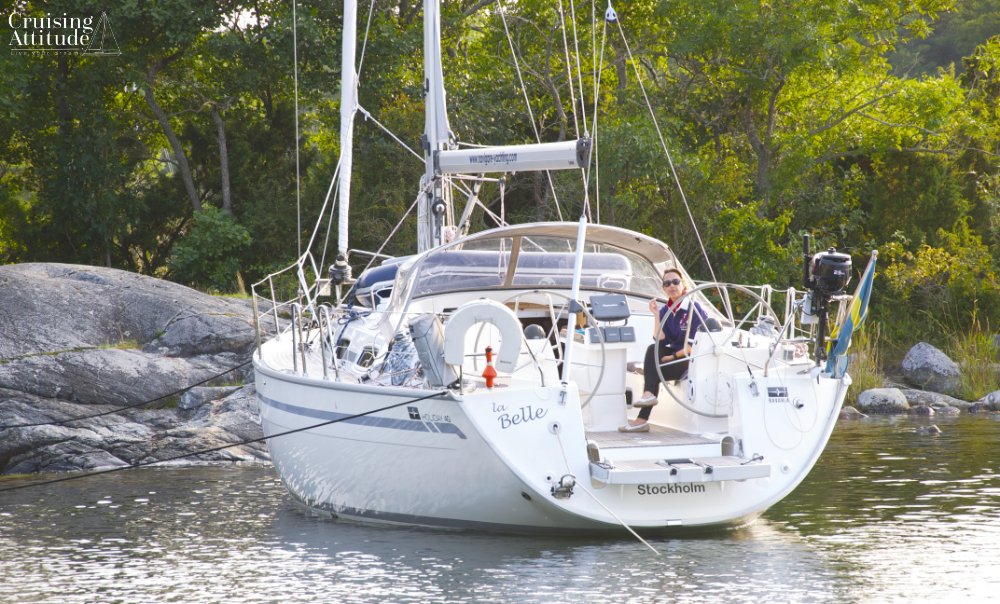 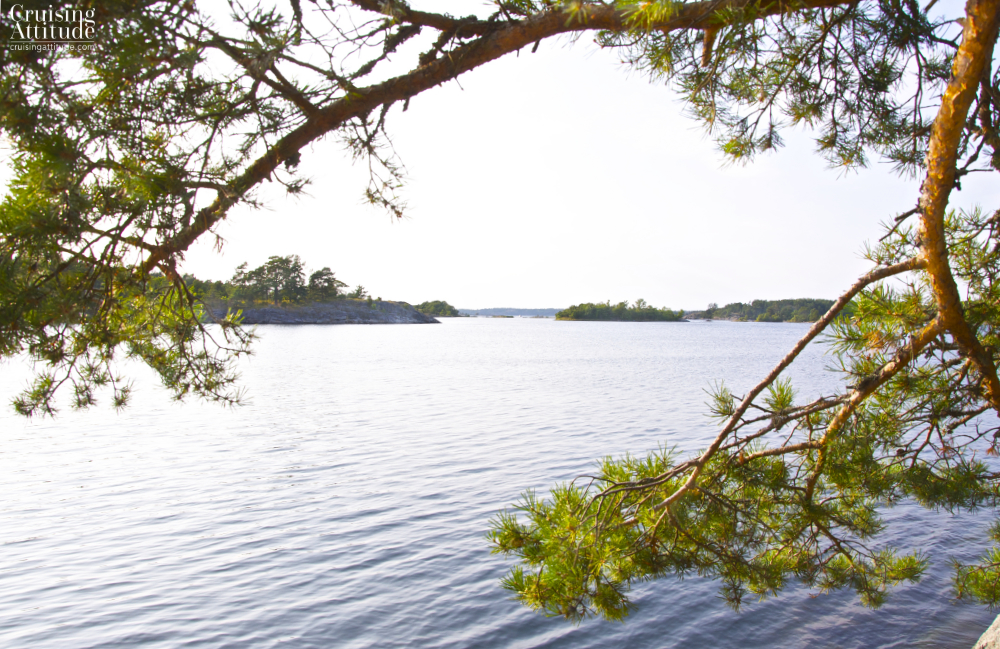 The day dawned with grey skies and a light drizzle. We were so disappointed since yesterday evening showed us clear skies until we turned in for bed. We had hoped the forecast for rain in the morning was wrong.

Today’s plan was to reach Lökaön, a large island with a perfect natural harbour on its eastern side (Österviken).  We had a forecast for wind from the northwest, so this anchorage would be perfect.

Lökaö builds together with the islands Storö and Bockö the largest nature reserve in Stockholm’s archipelago.

Our route took us around the eastern side of Sandön and Korsö, around Björkö and then almost directly north to take us to a channel through a group of islands that includes Lökaön. Stockholm’s version of Cowes.  Sandön is home to a large marina and village called Sandhamn. It’s Stockholm’s version of Cowes, and is rather lively during the high season between the midsummer holiday at the end of June and the beginning of August.  If you’re not the type that enjoys rock concerts and partying young (and not-so-young) people making lots of noise, don’t spend the night here during the high season.

We arrived at Österviken under a double rainbow – the rainy weather was on it’s way out towards the east, and we had a few rays of sunshine as we prepared to anchor in the middle of the harbour. 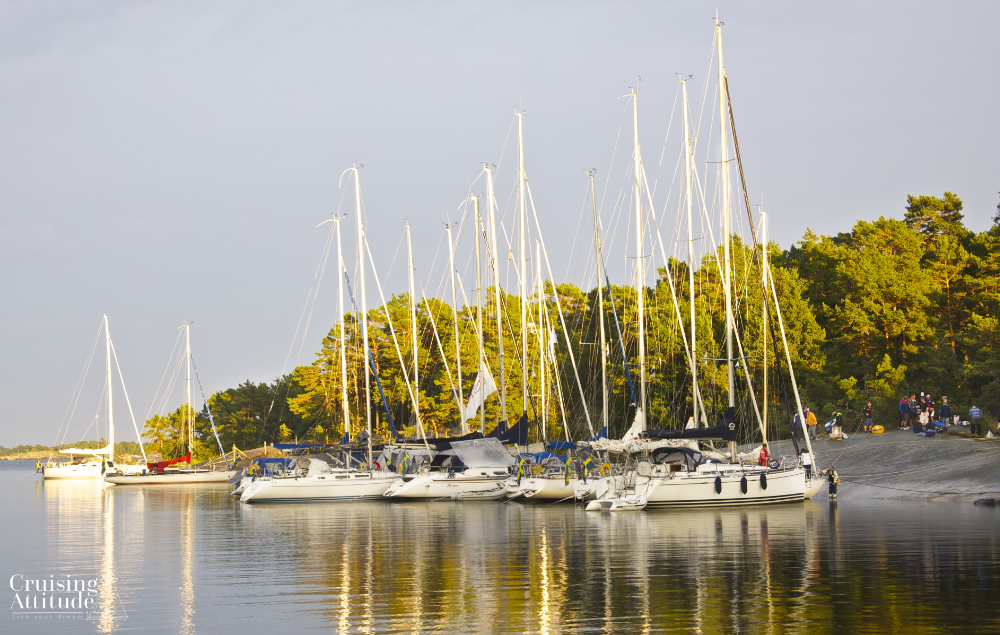 The well-loved anchorage of Österviken on the island of Lökaö

The north side of the island has several popular anchorage spots including  Saffransskäret and Lilltistronskäret, but since they are not at all protected, this area is suitable only if the forecast is for no wind, or just a weak southerly.

The sun was back and it was a good thing because today we would be picking our way through some of the rockiest parts of the archipelago.  We would need to tack our way north as we now had a wind direction of NNE.  The channel that leads from just north of Lökaö up through the rocks and skerries to just south of Tjockö is well-marked and easy to follow, but when tacking, you sometimes find yourself just outside the channel. That could easily lead to a grounding as the outer edges of the channel are strewn with underwater rocks. 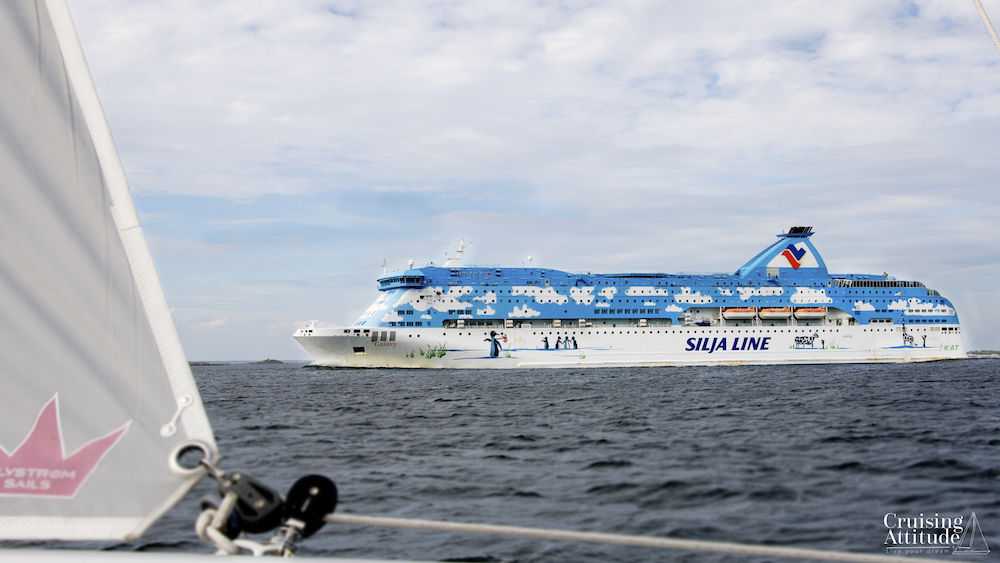 In retrospect, Granhamn wasn’t the best choice of an overnight anchorage.  It’s quite small, so when we arrived at around 16.00, it was almost full.  We tried setting our anchor, but the bottom doesn’t provide enough holding for the amount of rode we could put out.  We ended up squeezing into a space to moor to land (the Swedish tradition of mooring to trees or spikes set into the rocks together with a stern anchor).  We had just enough clearance under our keel (the Bavaria 40 has 2.2 meters of draught) for the space that was available between another boat and a shallow beach. 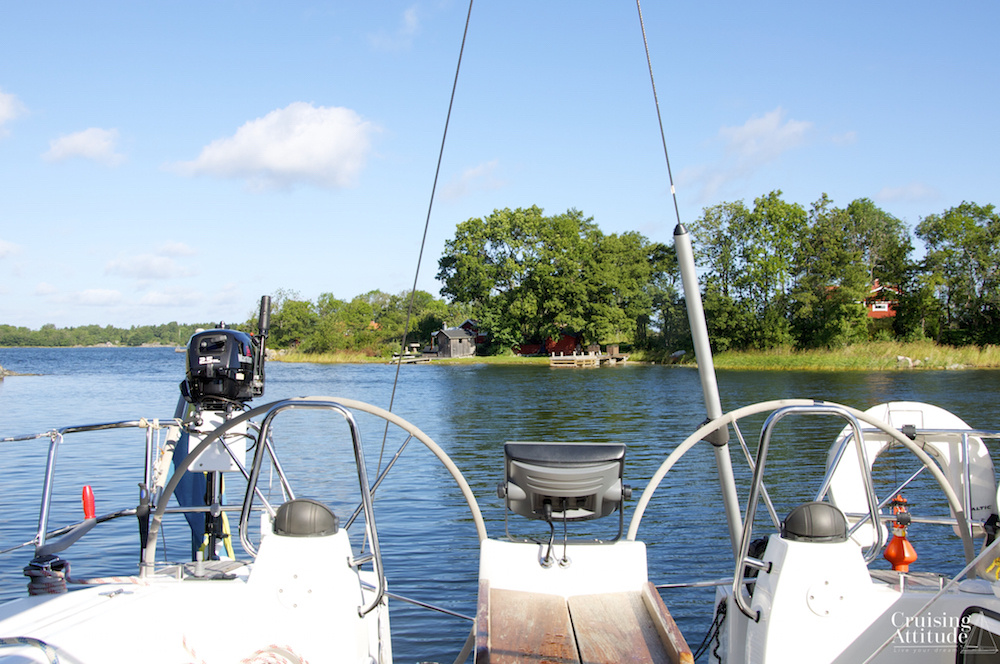 Granhamn is a traditional jump-off point for the passage to the Åland islands.  In the evening, you’ll see that big ferries to Finland and Åland steam by.  It’s an amazing sight, as the  ferries are like small glittering cities passing by your quiet anchorage.

We saved the visit to Sandhamn for almost last as we wanted to get there late in the season.  We are not big fans of noise and competing sources of music in the marina. As it was after the 15th of August,and mid-week,  a “low season” atmosphere reigned over the marina.

Another marina across the fairway from Sandhamn called Lökholmen is much quieter and provides a boat shuttle over to Sandhamn.

We arrived just in time to have a look at the summer pop-up shops, grab some groceries at Westerbergs and visit the charming little bakery.  Later that evening, we had dinner of cold-smoked shrimp in the Seglarhotellet (Sailors Hotel), which has a lovely second-storey view over the marina. 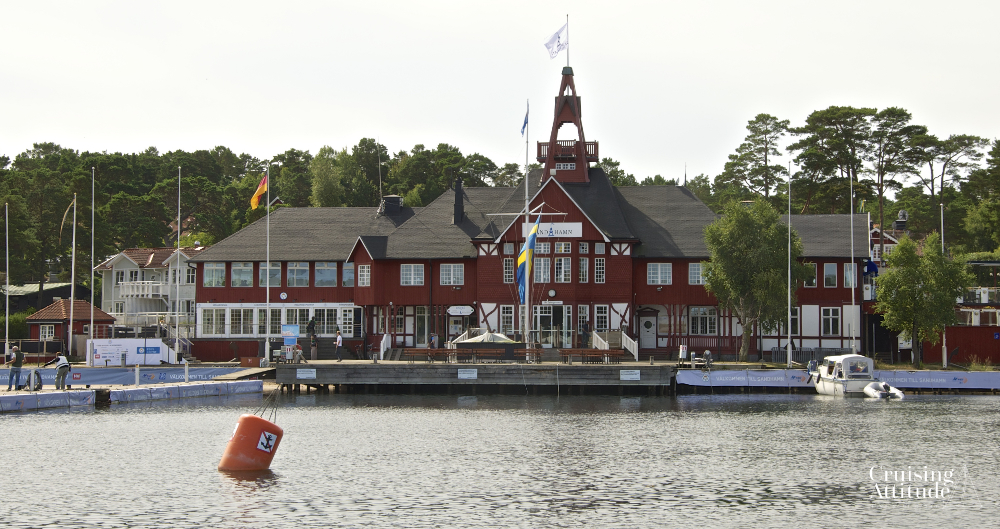 Sandhamn, Stockholm’s summer sailing centre.  During the high season in July until mid-August, this area would be full of boats

Tonight would be our last night in the archipelago, so I wanted to choose one of my favourites.  The choice fell to Träskö Storö.  It’s a large natural harbour protected from just about all winds except for north in some parts.

Since most of the good places to moor to land were already crowded, we decided to anchor out again.  We settled in the cockpit for a glass of wine and a book on our iPads as the sun slowly started it’s downward trajectory. 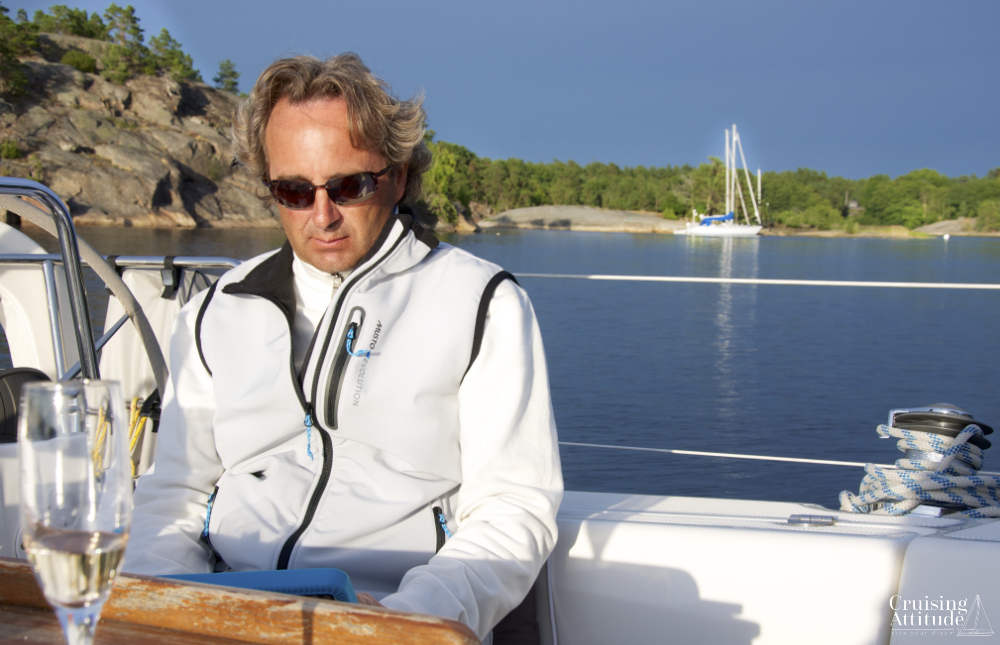 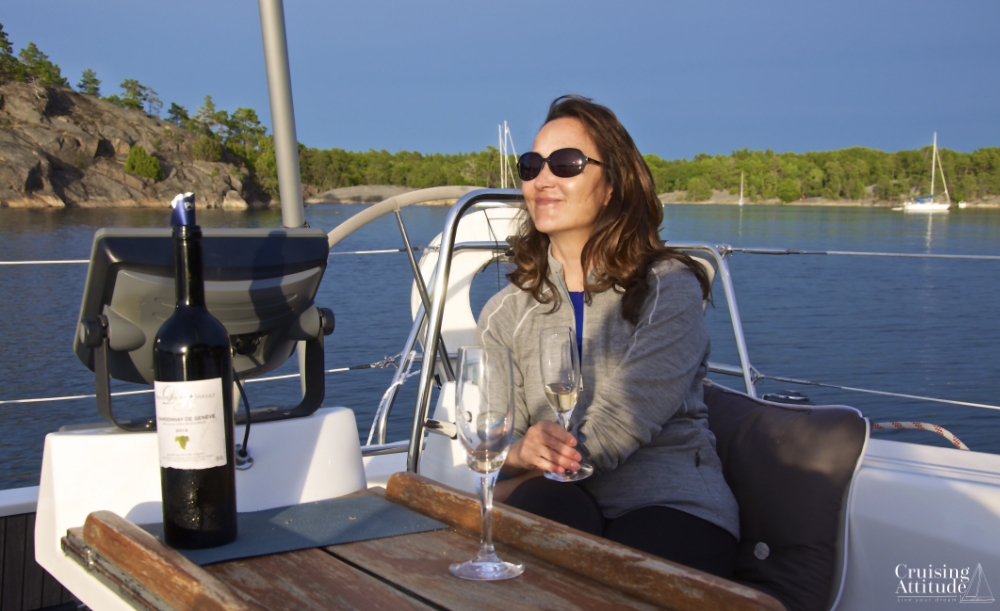 An hour later we noticed a very slight sound of vibration.  We checked to see if our halyards were perhaps too loose and were flapping with the little bit of wind we had. No. We checked to see if we were moving by taking a fix on a couple of distant rock formations.  After 15 minutes, we were still in the same place according to the fixes.  Then we thought maybe the flapping of the towels we had hung on the lifelines were causing the sound.

We had dinner, took the fixes again and got the same degrees as before.  We went to bed at around 22.30, but I woke up every hour to look out the porthole to see if we had moved.

At about 3.30, I did notice that we were much closer to one of the little islands in the harbour and shouted to Jacques that we had dragged anchor and had to move the boat.  Thankfully, there’s not much darkness in August at this latitude, so the sun had already been climbing for awhile.  We weighed anchor and looked for another place. This time we backed down at 2,200 rpm instead of the 2,000 we usually do.  The anchor held and now there was no wind at all.  We were confident that the little Bruce anchor would hold.

Now we know what that strange vibrating sound means!  Fortunately, no harm done.

Holidays can’t last forever, and the final day of our cruise arrived.  We slept a bit later than usual, waking up at around 10 o’clock instead of the usual 7.00 or 8.00 because of our anchor “adventure”.

After a last wonderful breakfast at anchor, we left for Lidingö, taking the long (eastern) way around the Saxarfjärden (“Scissor Fairway” in english).  We wanted to stay out as long as possible because of the fine weather. 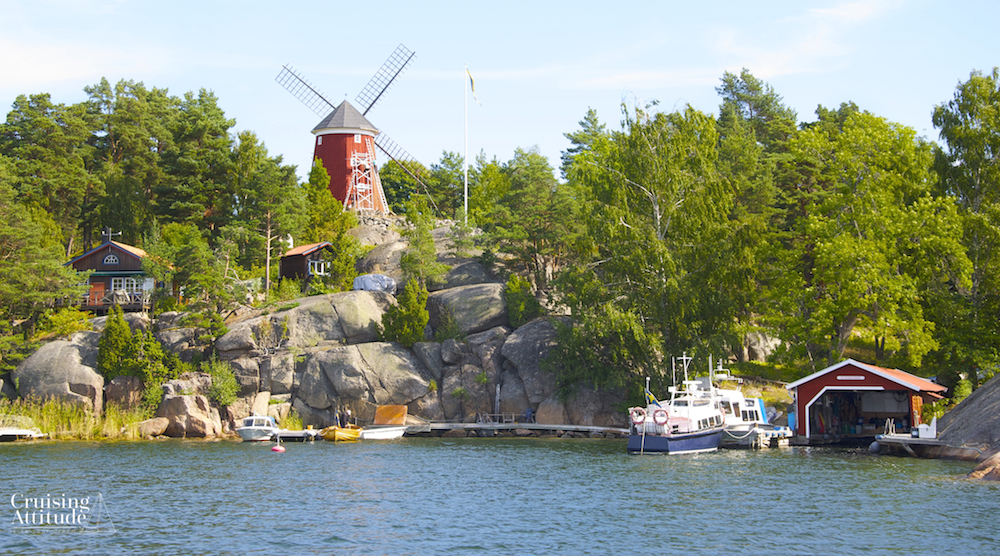 We filled the diesel tank at Waxholm, which has a choice of two fuel stations and a marina.  The marina itself is just in front of the main street. You’ll find boutiques, art galleries, cafés and restaurants as well as grocery stores, a pharmacy and one of the state-run wine/beer/liquor shops called “Systembolaget”.

From there it is a short hop to Lidingö’s Gåshaga marina.  We arrived at around 17.00 and went through the usual inspection procedure when chartering.  After dinner at the restaurant at the marina, we enjoyed our final night on the boat.