Getting Started, Part 5 – the Search for Our Dream Boat Continues 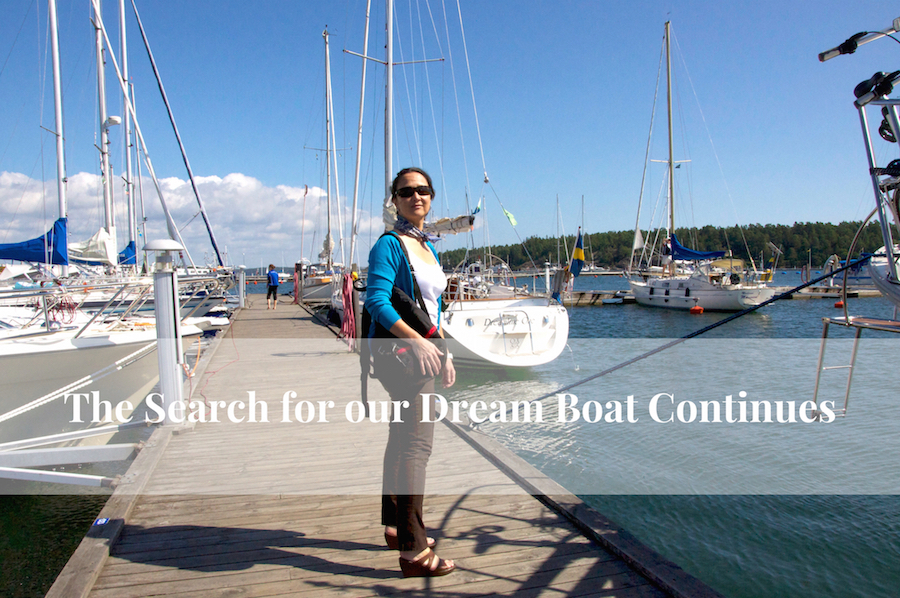 It was now 2013, and our search for the perfect cruising sailboat, our “dream boat”, continued. We visited Düsseldorf again in January, mostly because Hallberg-Rassy had suddenly replaced the 54 with a brand-new 55.  We had to see it and compare the old 54 with the new 55.  We also wanted to check out a Solaris, as one of our “classmates” from the offshore theory course had just bought a Solaris 48 which he keeps in Genoa, Italy, and he absolutely raved about it.

We were well-received at the Solaris stand, and they are indeed beautifully-crafted boats.  But we could tell right away that we were not going to buy one.  A Solaris is a great Mediterranean or perhaps Caribbean cruising yacht, but the boat and especially the huge aft cockpit did not install a feeling of security in our minds. We intend to start our cruising life in Scandinavia and northern Europe and then perhaps Iceland, Greenland and Canada – places where the water temperature rarely rises above 18°C – places where you want to stay put on the boat. The wide and roomy saloon did not offer much in terms of handholds and bracing needed if going through a rough sea, but it did provide great entertainment space for a Mediterranean-style dinner party.

So on we went to our appointment at the Hallberg-Rassy stand.

The new H-R 55 was not very different from the 54. The greatest difference was the addition of two port lights on each side of the hull in the saloon area.  The upside was more light in the saloon and a tiny bit of view.  The downside was that it took away quite a bit of storage (removal of cupboards on each side of the saloon).  We weren’t sure if the change was a good thing. Storage is, after all, something you never have enough of on a boat.

We discussed what options we wanted/needed, such as the double bed configuration in the owner’s cabin instead of the standard twin beds separated by a little seat in the middle. There were four or five pages of options to go through. Dishwasher?  No.  Washing machine? Yes.  Microwave? Yes.  Television? No. Double bed instead of the standard bunk beds? No.  Shoal keel?  Yes.  And so on…  An hour later, we felt we were almost ready to order the boat! We left the H-R booth with an appointment to visit the yard at the end of August in conjunction with the Open Yard boat show there.

One of the absolute highlights of the 2013 Düsseldorf show was meeting someone who was to become a friend, coach and a big influence on the construction of our boat, Freja.  This person was Leon Schultz. 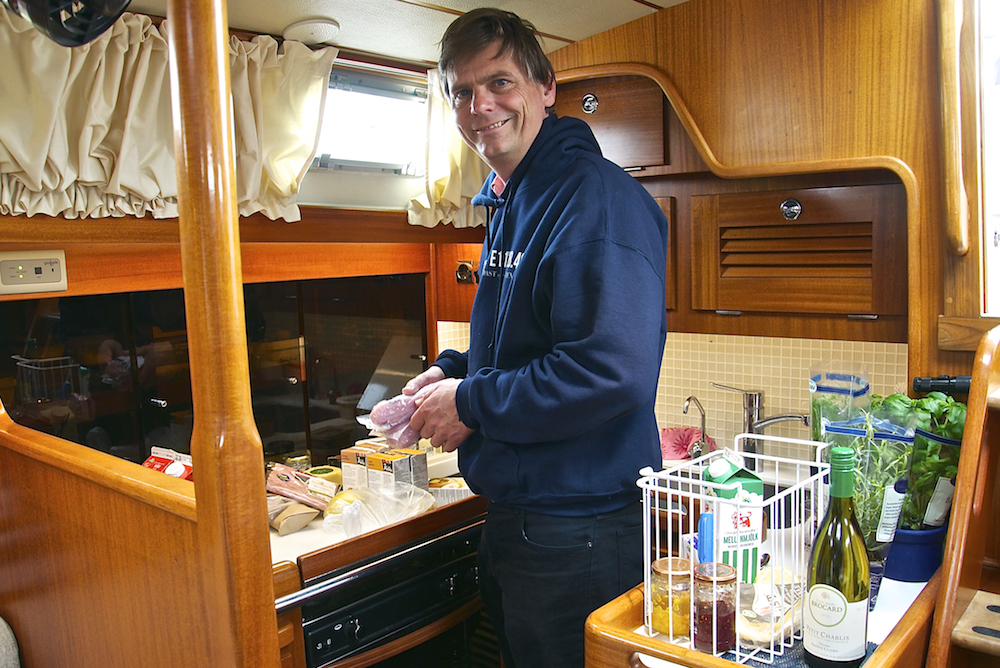 Leon onboard his Hallberg-Rassy 46 “Regina Laska”

Leon was in Düsseldorf to promote his book The Missing Centimetre (recently re-named to Sabbatical at Sea), which I had bought and read a few months earlier.  We met standing in a cash register queue!  I immediately recognised him from all of the photos in the book and we had a short but lively conversation about life after quitting everything to go cruising.  He proved to be just as kind, open and insightful as he seemed to be in the book.

Leon found it impossible to go back to the “office life” after his one-year cruising sabbatical, and was at this point (early 2013) providing cruising/sailing training on his new boat, Regina Laska, a Hallberg-Rassy 46.  We thought it would be a good idea to do some sailing with a private coach, so we took his business card, fully intending to get in touch in a year or so.

We left Düsseldorf with the H-R 55 in our sights. We received an offer, detailing all the options we discussed, a couple of weeks after the show.  But after seeing what Leon had done with Regina Laska (a total refit of an older boat), we started to entertain thoughts of doing the same.  What about buying an older boat, at a much lower price, and then refitting it to suit our requirements?  Were we getting analysis paralysis, or were we being wise in considering all possible options?

It was only February of 2013, and our goal was to have a boat in the spring of 2016, so we weren’t quite worried about making our final decision yet. Plenty of time to get through our analysis paralysis.

On a sunny day in June, I stumbled upon the yacht builders page on sailnet.com. Just for fun, I paged down just to see if there was a builder I didn’t know about yet.  We had decided to go through with ordering the H-R 55 in August during the Open Yard boat show in Ellös, but why not?  I had finished a big task for work, and felt entitled to disappear down a rabbit hole for 15 minutes while I drank my coffee.

“Discovery Yachts”.  Well, this was one I’d never heard of!   Click.

Houston,  we have a problem.

I waited for Jacques to return home for lunch, and showed him the photos and then the video (since taken down as it is of the “Mark I” rather than the “Mark II”) of the Discovery 55.  Same reaction.  Suddenly, our well thought-out plans were turned upside down.

The lightening bolt effect had happened yet again.

I knew in my heart after seeing the photos and the video, that this was “the one”.  I sent for the brochures and I phoned the sales manager directly after lunch to set up a visit to the yard in Southampton.  A few days later we received a packet in the mail with brochures, reprints of press articles and photos of the Ron Holland-designed Discovery 55.  We had 10 days to go through everything before heading up to Southampton to visit the yard. 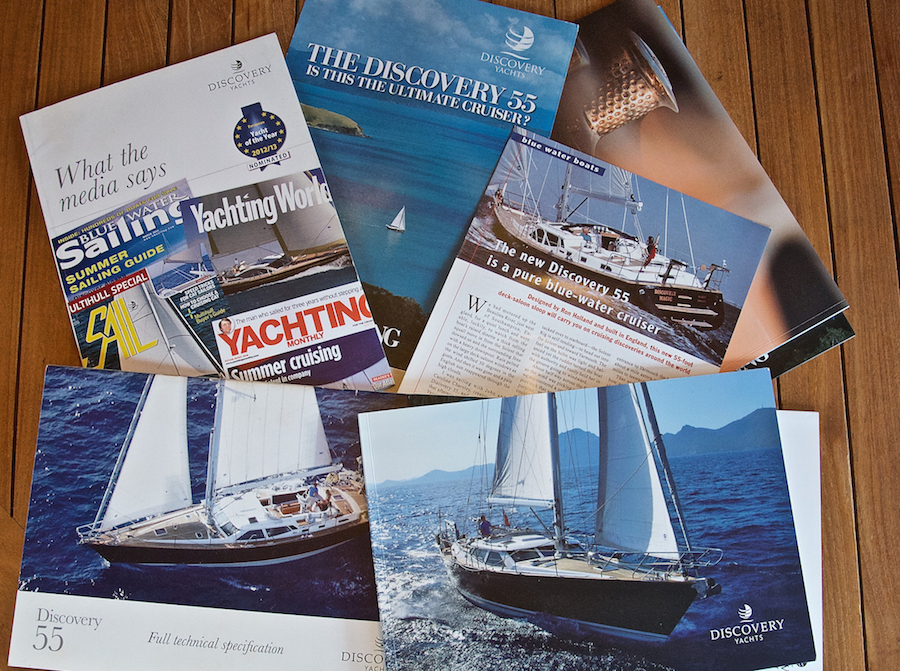 This was the info pack that Discovery Yachts sent us in anticipation of our visit.