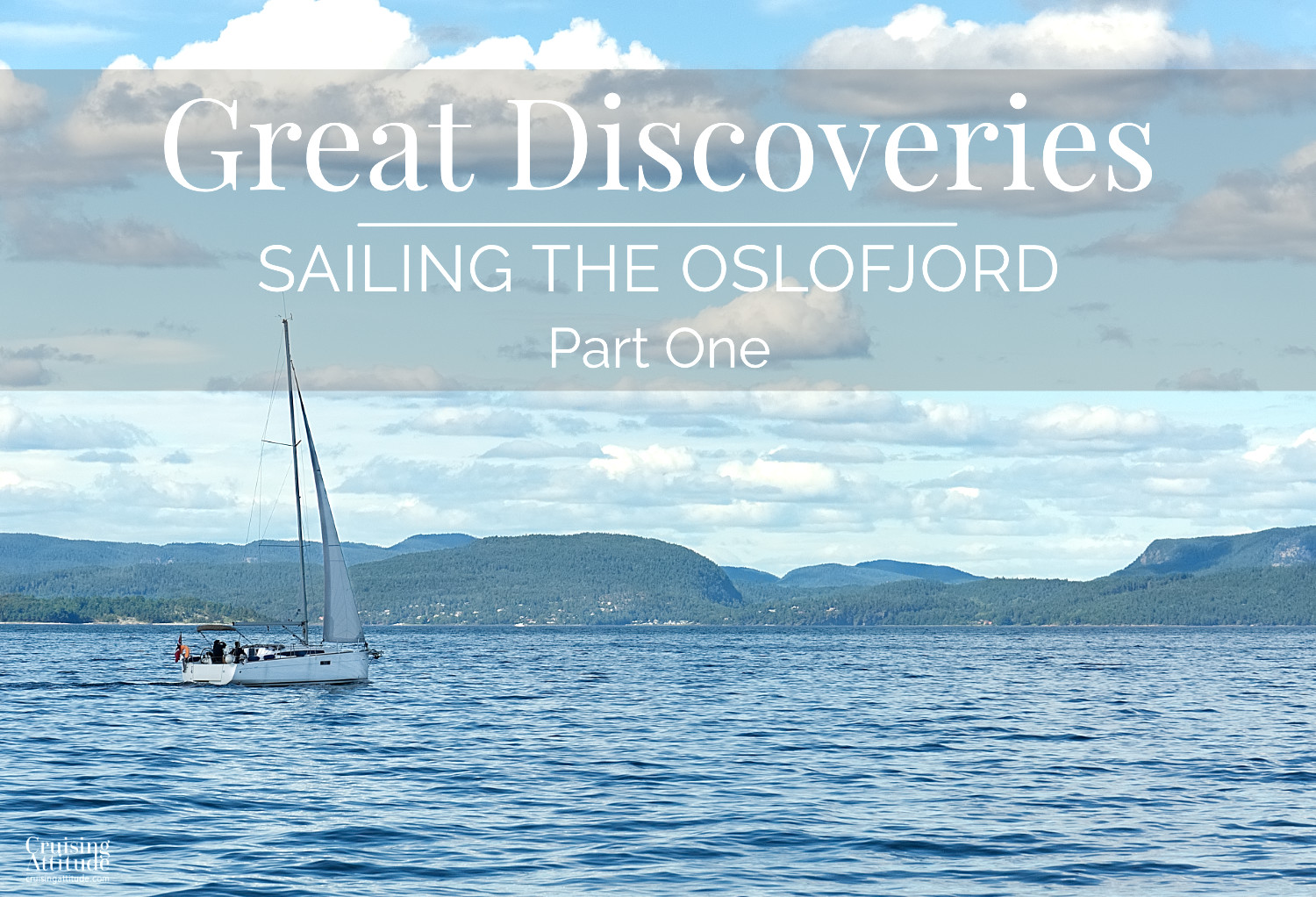 We use three different guides to Norwegian anchorages and marinas.

If you’re coming up from Sweden, a good stop may be Fredrikstad.  It has a marina in the middle of town and a lovely historic old town, Gamlebyn, to visit.  We arrived from the east, first going up the fjord, then river Østerelva that leads to the city of Sarpsborg There’s quite a current here, so consider yourself warned.  You can also approach from the west side, in which case you’ll avoid having to wait for bridge openings. 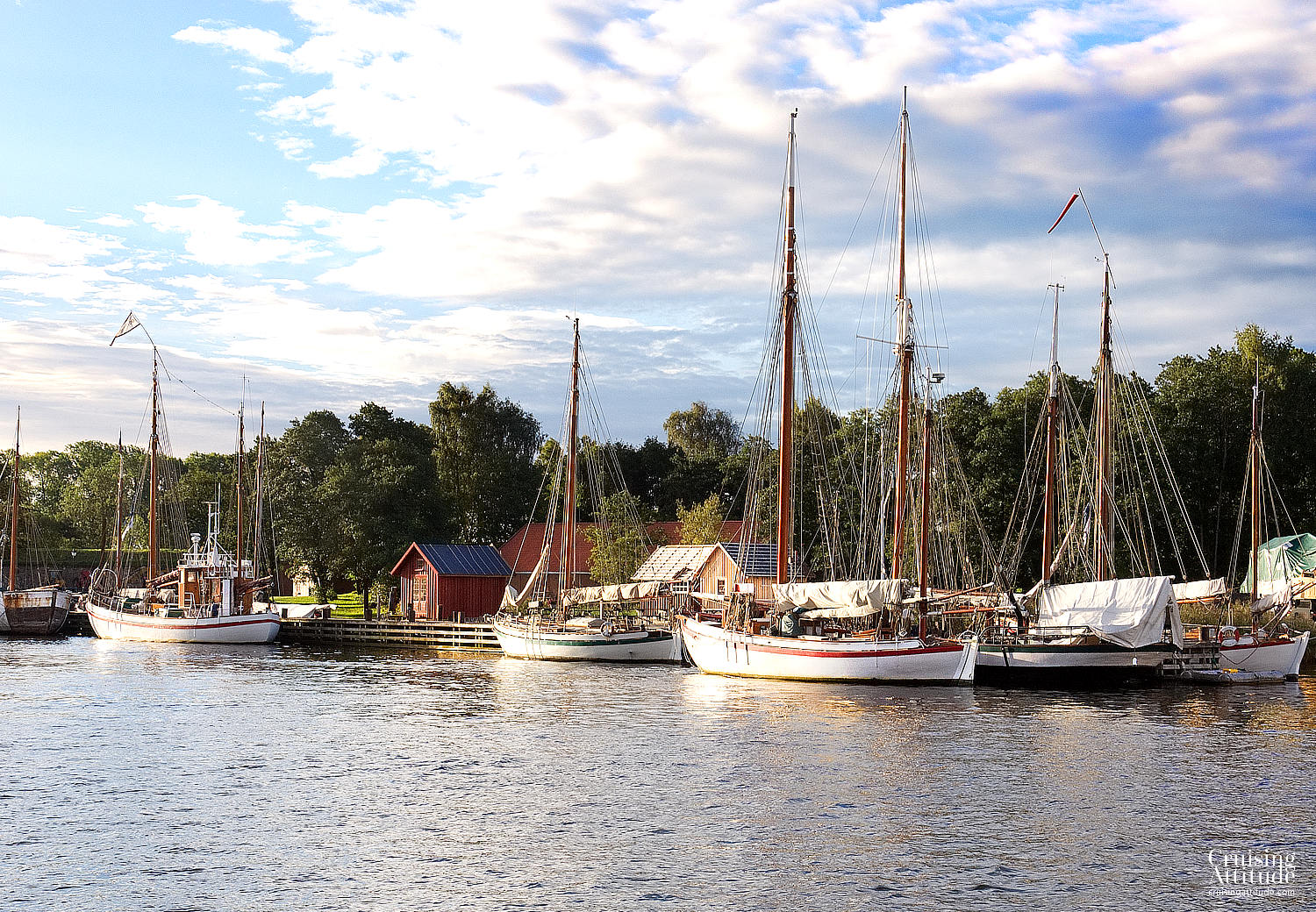 When you enter from the east to enter the city, you’ll see an old mill in full working order — that’s how strong the current is. 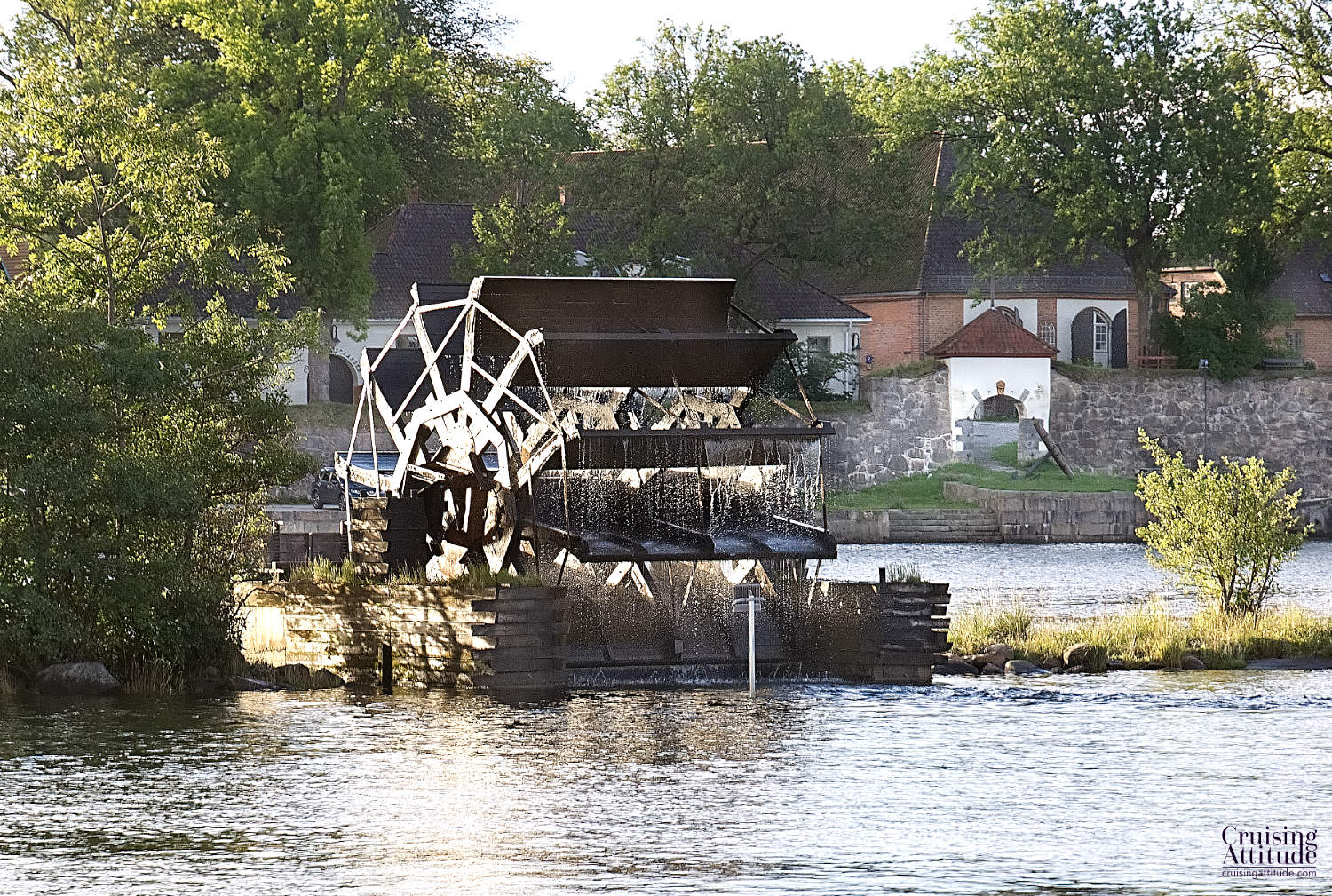 The mill at Fredrikstad 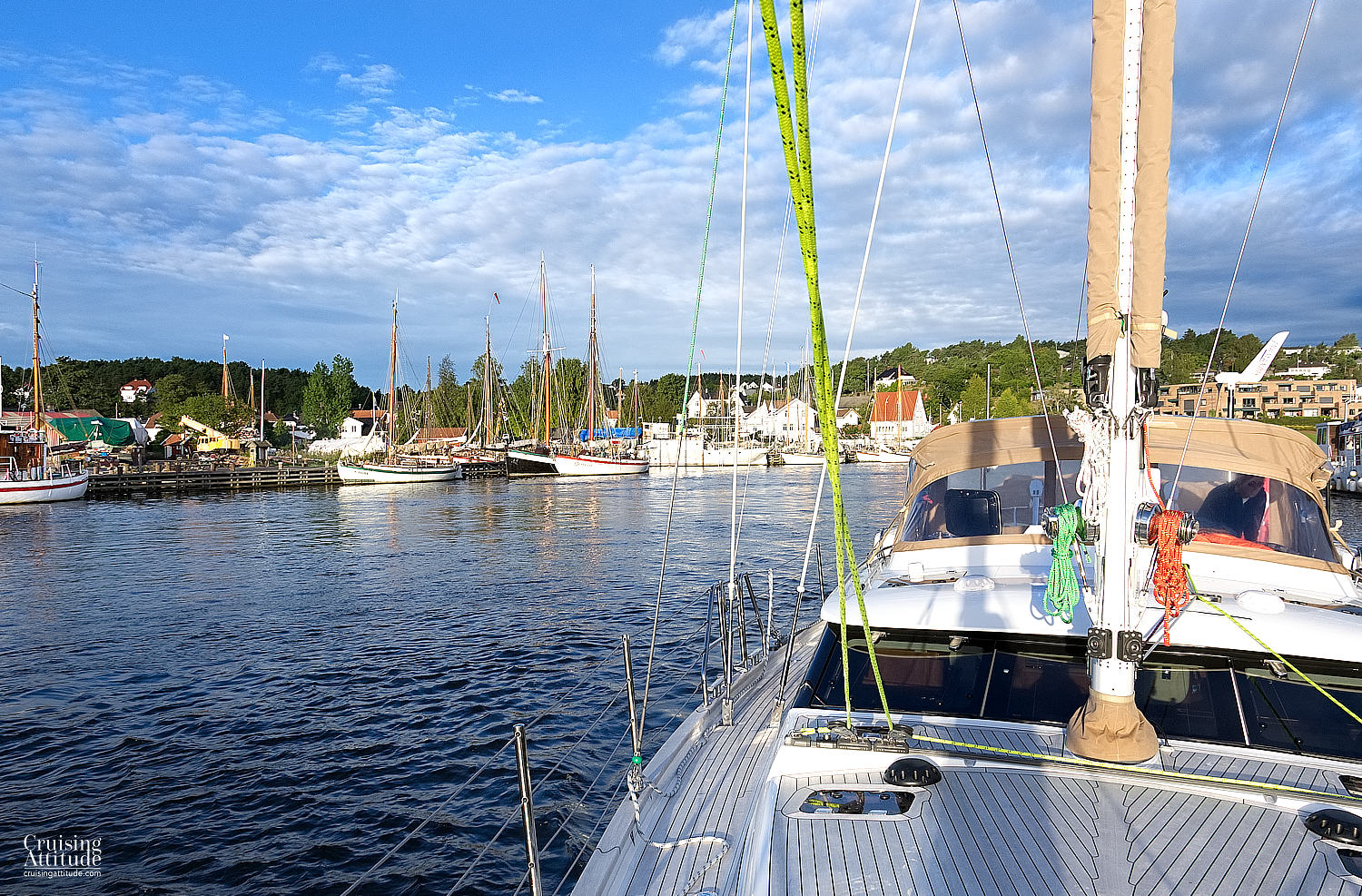 View towards the centre of Frekrikstad

The town itself is quite small but has a good choice of restaurants, cafés and bars along the quayside.  We had dinner at a tapas restaurant there – excellent dishes and good prices (for Norway, that is).

The prices of berths at quayside range from 250 NOK to 600 NOK (15 meters and up).  They have showers, toilets and laundry facilities.

We planned Fredrikstad as our first stop because we thought we’d have to check in our boat and our dog.  We well called the Norwegian customs , we found out that you just need to carry your dog’s passport (with the stamps for all of the necessary vaccinations and the special worm treatment for Norway) in your pocket or purse — just in case anyone wants to check. The customs explained to us that since our boat is registered in a Schengen county and we are from a Schengen country, we didn’t need to clear in. 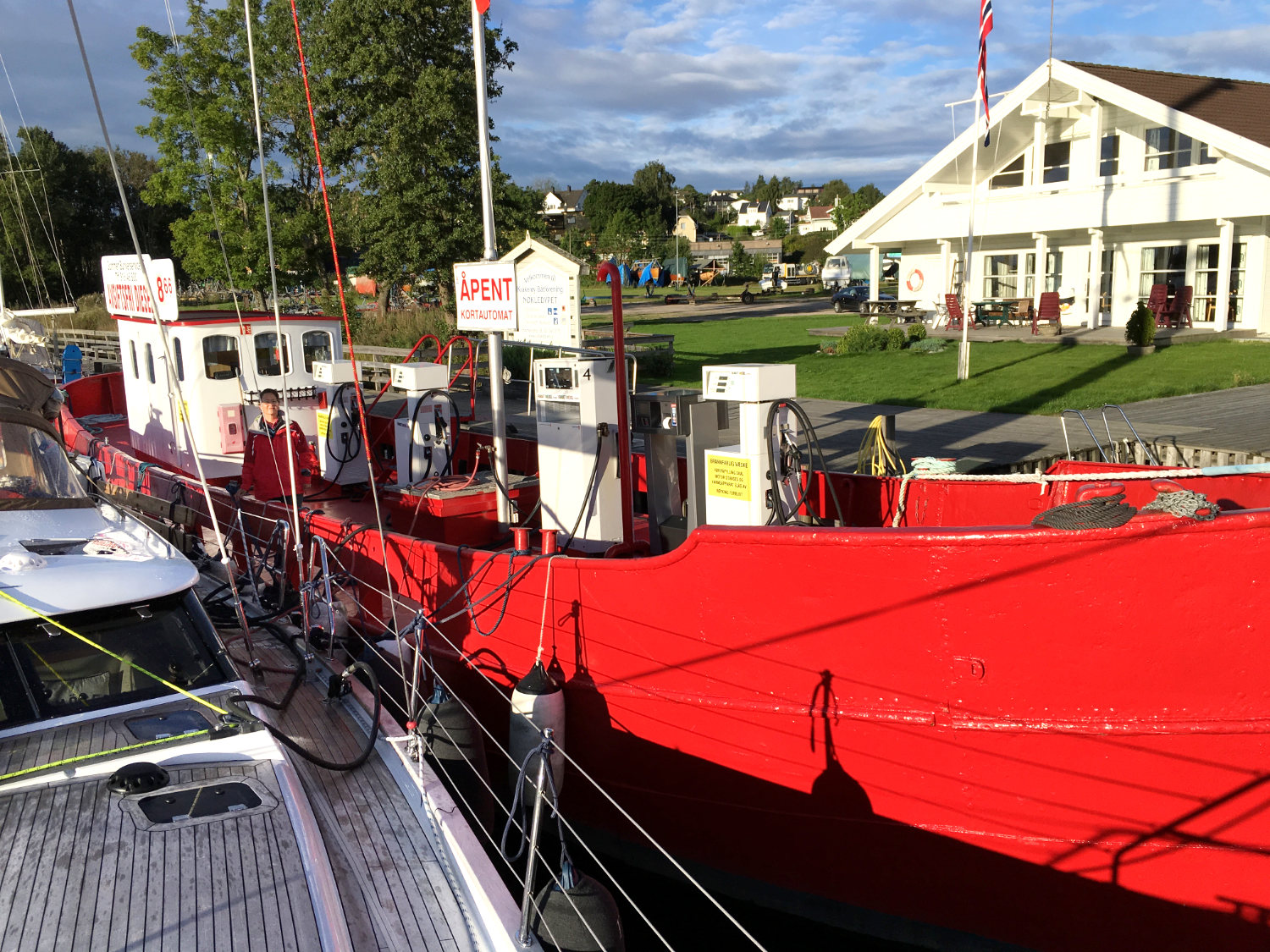 Filling up the diesel tanks. Diesel is a bit cheaper in Norway than Sweden.

If you leave Fredrikstad from the eastern side, you may want to fill your diesel tanks at the Nøkledypet marina. Glommen Bunkerservice is open between 8.00 and 20.00 during the summer season (until end of Sept.) 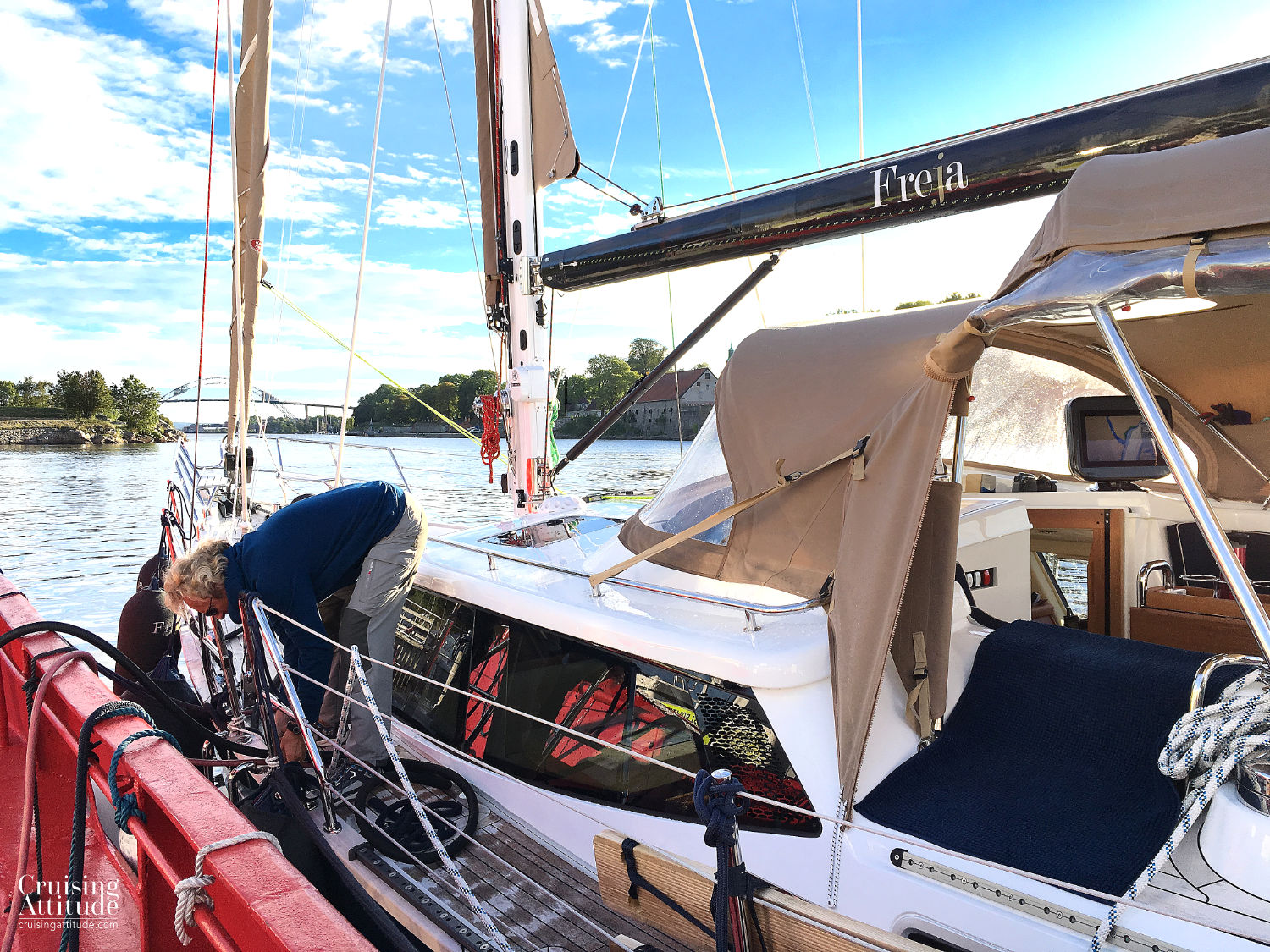 It seems that you don’t pay the road tax on diesel at marine fuel stations. You do pay the VAT though.

Another idea for a first stop in Norway is the charming anchorage of Korterødkilen on north side of the island of Kjeøya.. It’s kind of a Norwegian summer neighbourhood, though there’s not much activity outside the vacation period and the weekends.  It is protective of winds from any direction.  You just need to be careful of your anchor scope as there are several boats lying on buoys.

Our first anchorage on the way up to Oslo was Hankø’s west side.  Hankø also has a big marina on it’s east side.  We chose the anchorage because we didn’t want to waste time going around the island.

In hindsight, we should have done so because the Hankø anchorage is not really suitable for a large boat like Freja. The problem here is that many boats are lying on buoys, and there are additional buoys for the Norwegian cruising club to use.  The anchorage is so crowded with buoys, it’s difficult to put out enough chain to have a proper scope for strong winds.

We had strong winds at the anchorage of Hankøhavna

If your boat is 9 tons or less, you can use these buoys if they aren’t taken by a cruising club member.  Since our boat displaces far more than 9 tons, (about 27 tons fully bunkered) hooking onto one of these buoys wasn’t possible. We prefer to use our big anchor in any case, as we know once it’s bedded in, we aren’t going anywhere.

Our 55kg Spade held throughout a night of 30-38 knot winds, even on short scope (about 4:1) but I didn’t get a lot of sleep.  I was constantly waking up to check my iPad (which acts as a remote for our Furuno TZ plotter) to check the wind speed and to see if we were dragging. 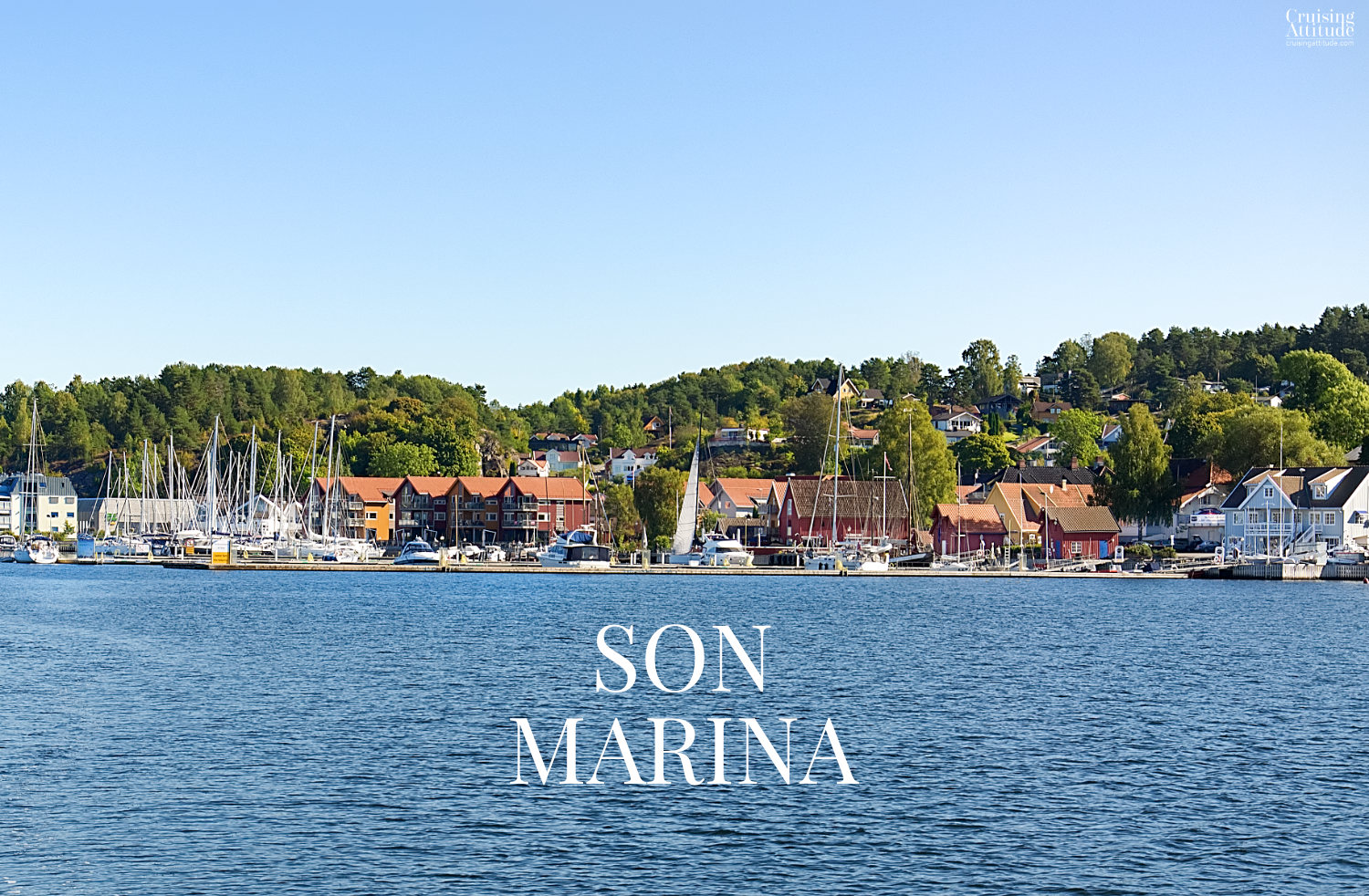 We found the seaside town of Son utterly cozy and charming.  Hyggelig as they would say in Danish.  We arrived  on a Saturday, so the village was full of activity and all of the littles shops, restaurants and cafés were open all weekend (except for the Vinmonopolet which is always closed on Sunday.) 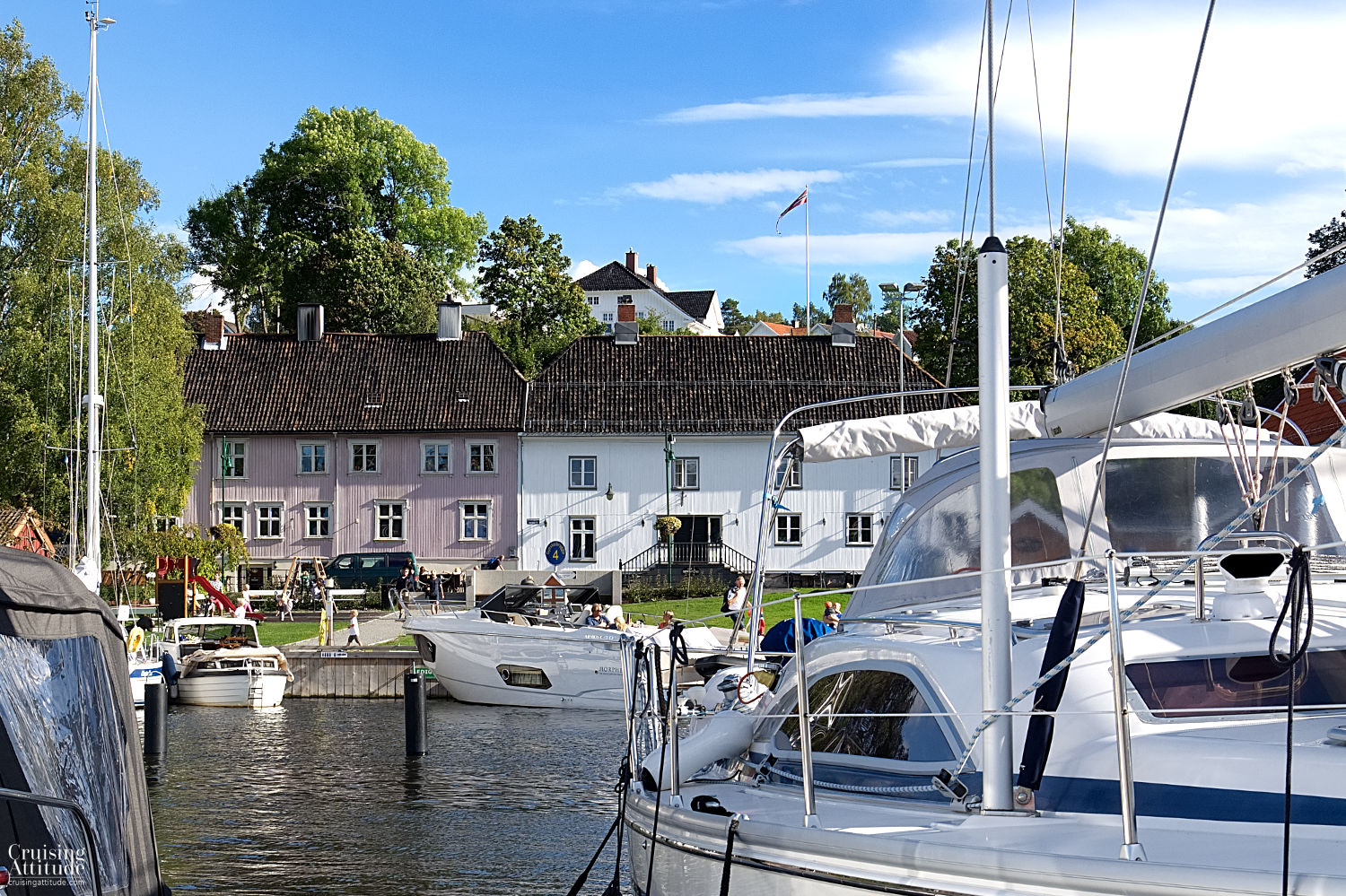 Speaking of the Vinmonopolet — this is the Norwegian version of the state-run shops that sell alcoholic drinks.  You see the same system in Sweden (System Bolaget) and in Finland (Alko).  Norway has the most expensive wine of the three countries, so you may want to stock up before arriving.  In Norway, Finland and Sweden, you can buy light beer (lower alcohol content) in grocery stores, but normal beer is also sold only at the state-run shops.  You may think that because it’s a monopoly system that the prices are higher than in “normal” shops, but that isn’t always the case.  We saw, for example, a 75 cl of 2014 Tignanello for sale at 600 SEK (61 Euros or 68 USD) in Sweden.  The same bottle in Switzerland would cost twice that. 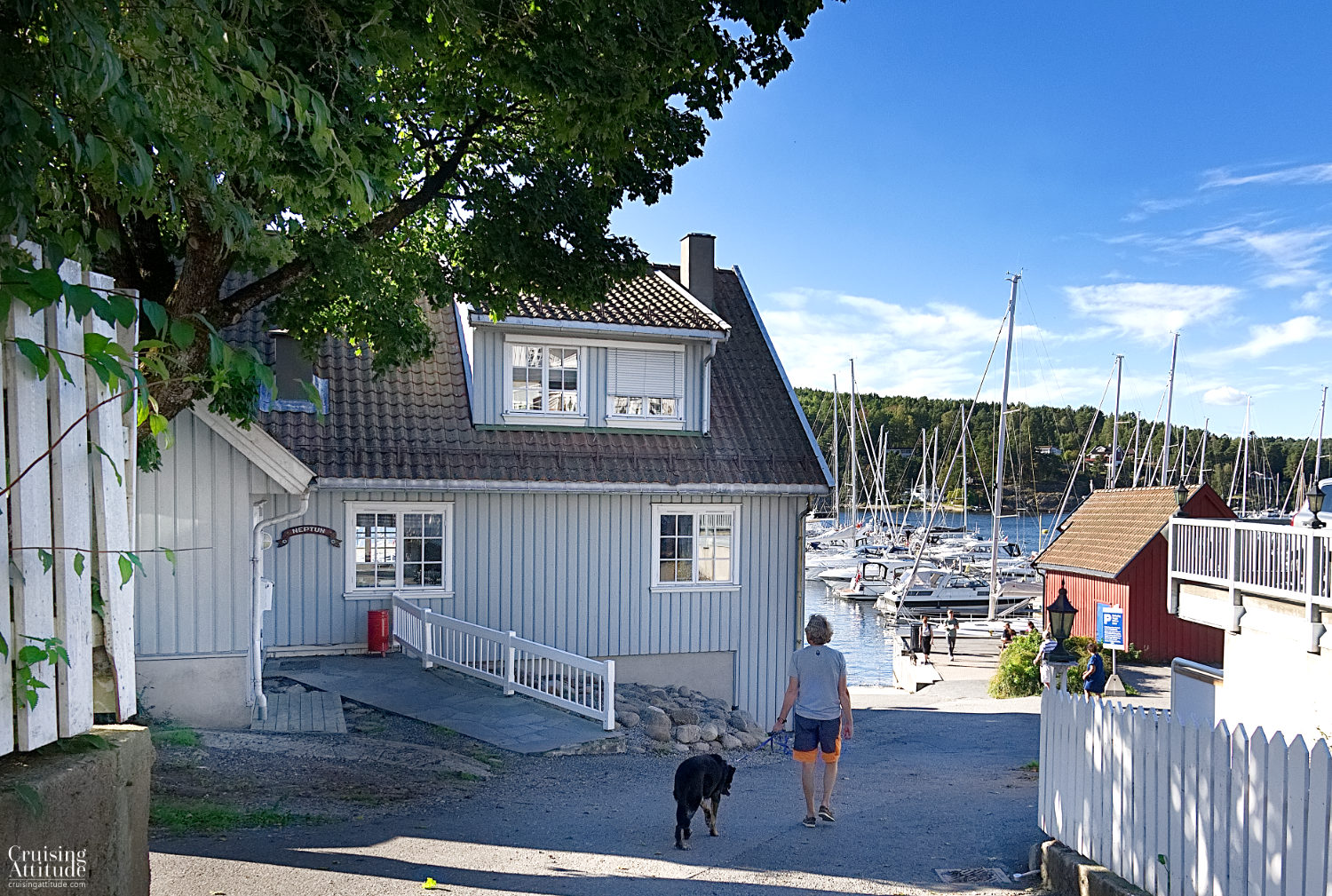 Out for a walk in the seaside town of Son 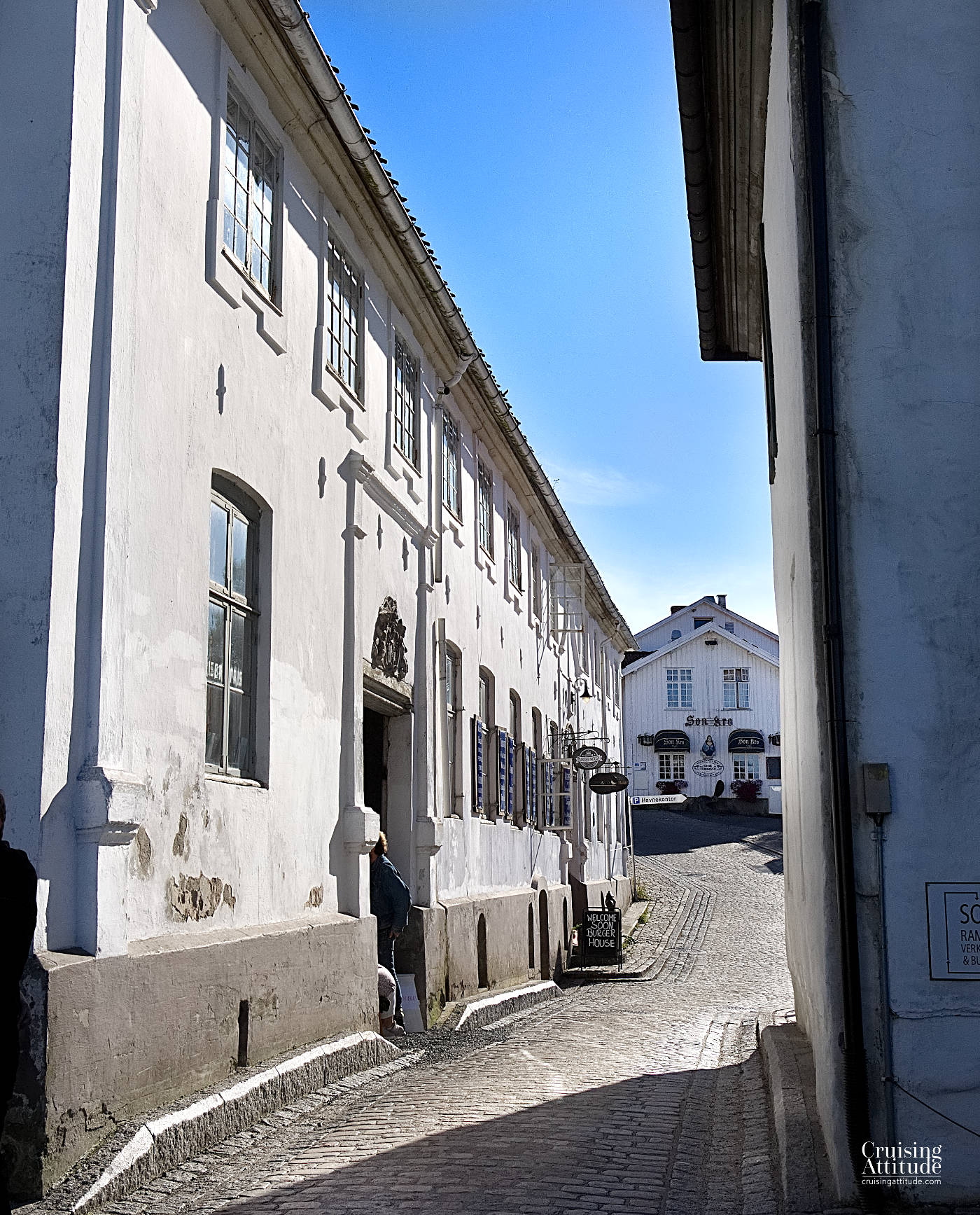 The beautiful cobblestone streets of Son

Getting back to Son Marina,  we spent 2 and a half sunny days there.  We sampled one of the restaurants, “Solsiden”, had coffee in one of the pleasant cafés, “Torvgården”, both very good. Jacques even had a haircut at the marina salon. 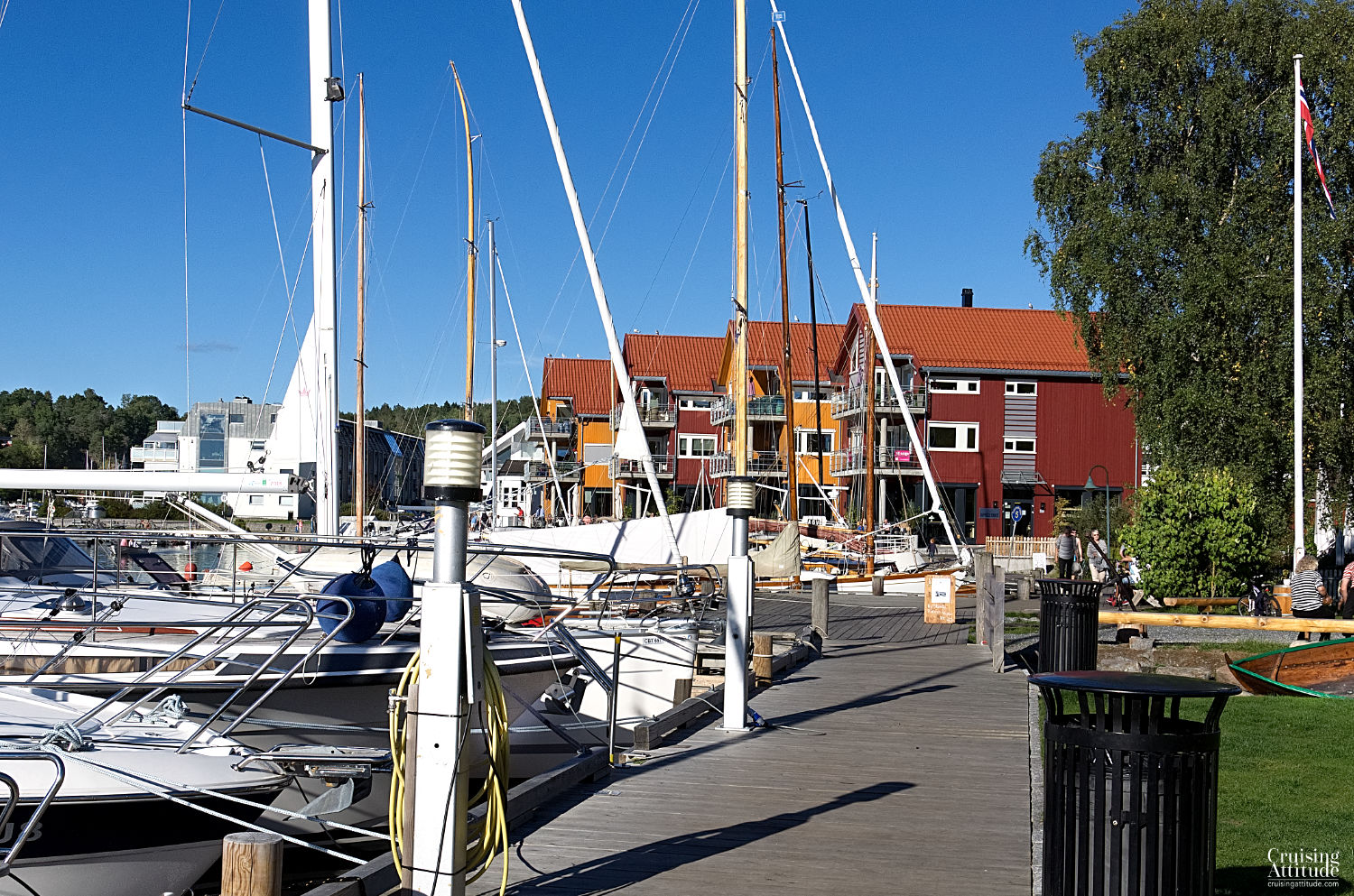 A view of the boardwalk at Son marina 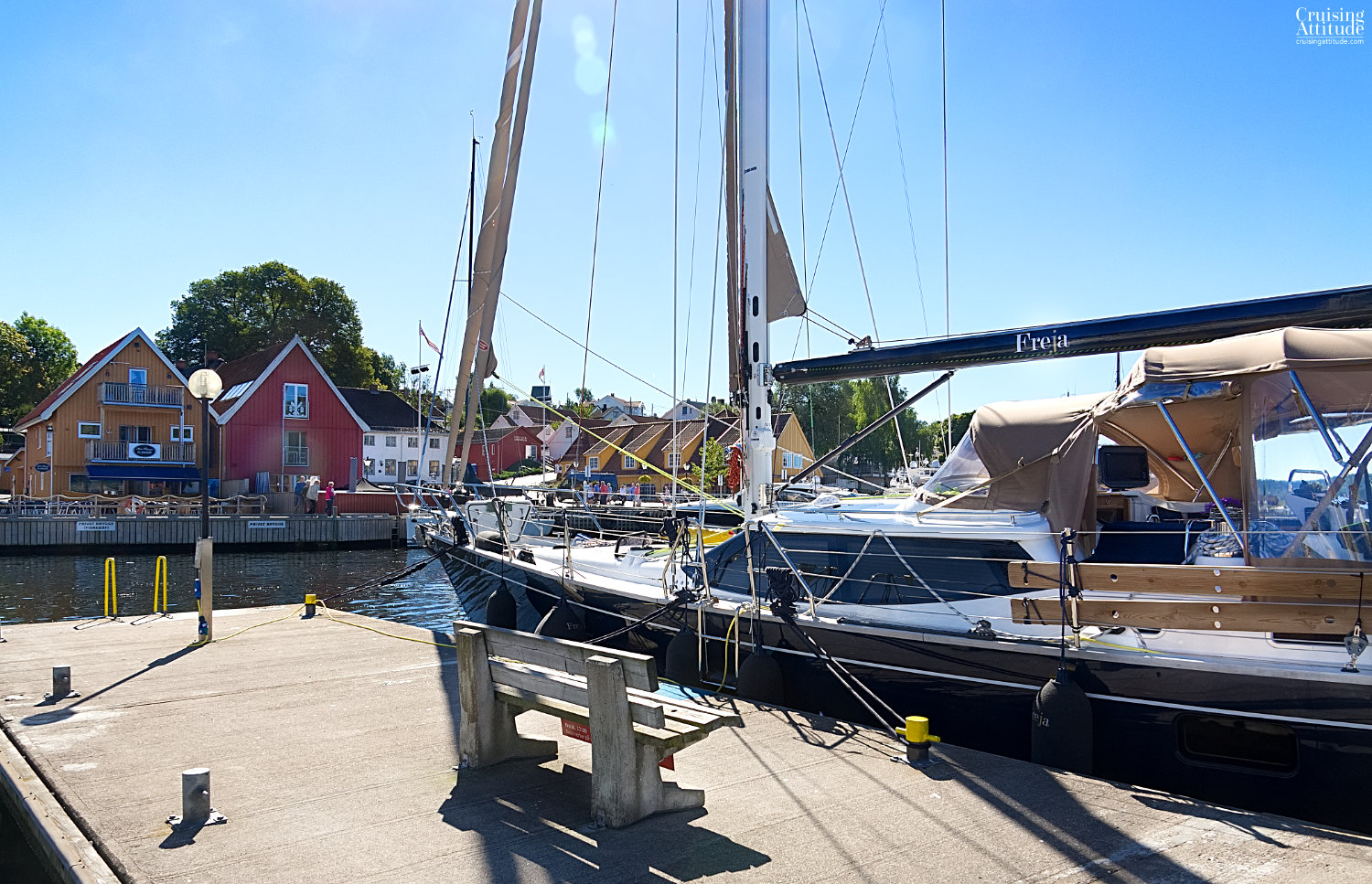 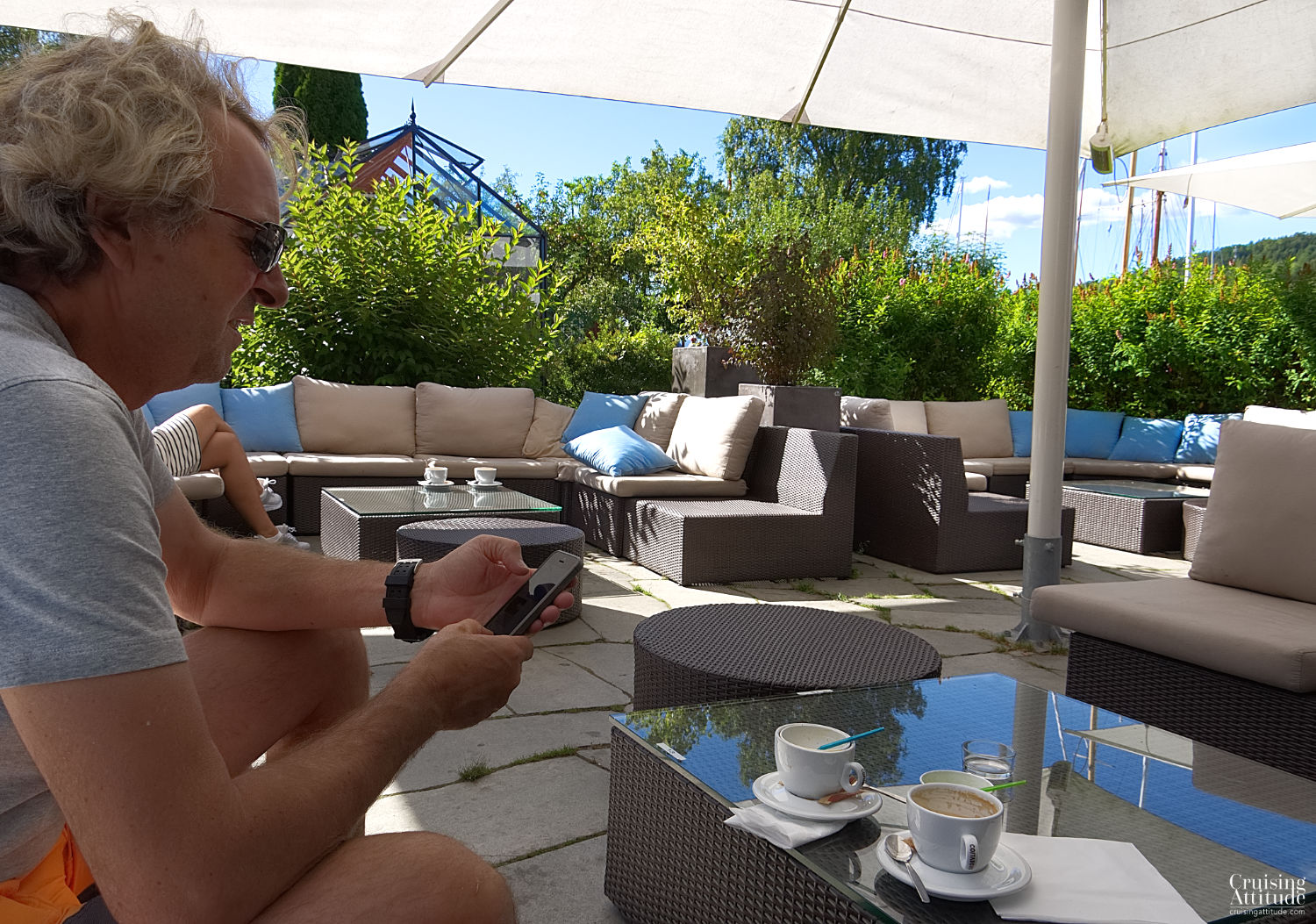 Having some early morning cappuccino in a café at the marina.

Be warned though, that outside of the normal summer holiday period (from around the 25 of June to around the 10th of August, the restaurants and cafés are only open on the weekends. 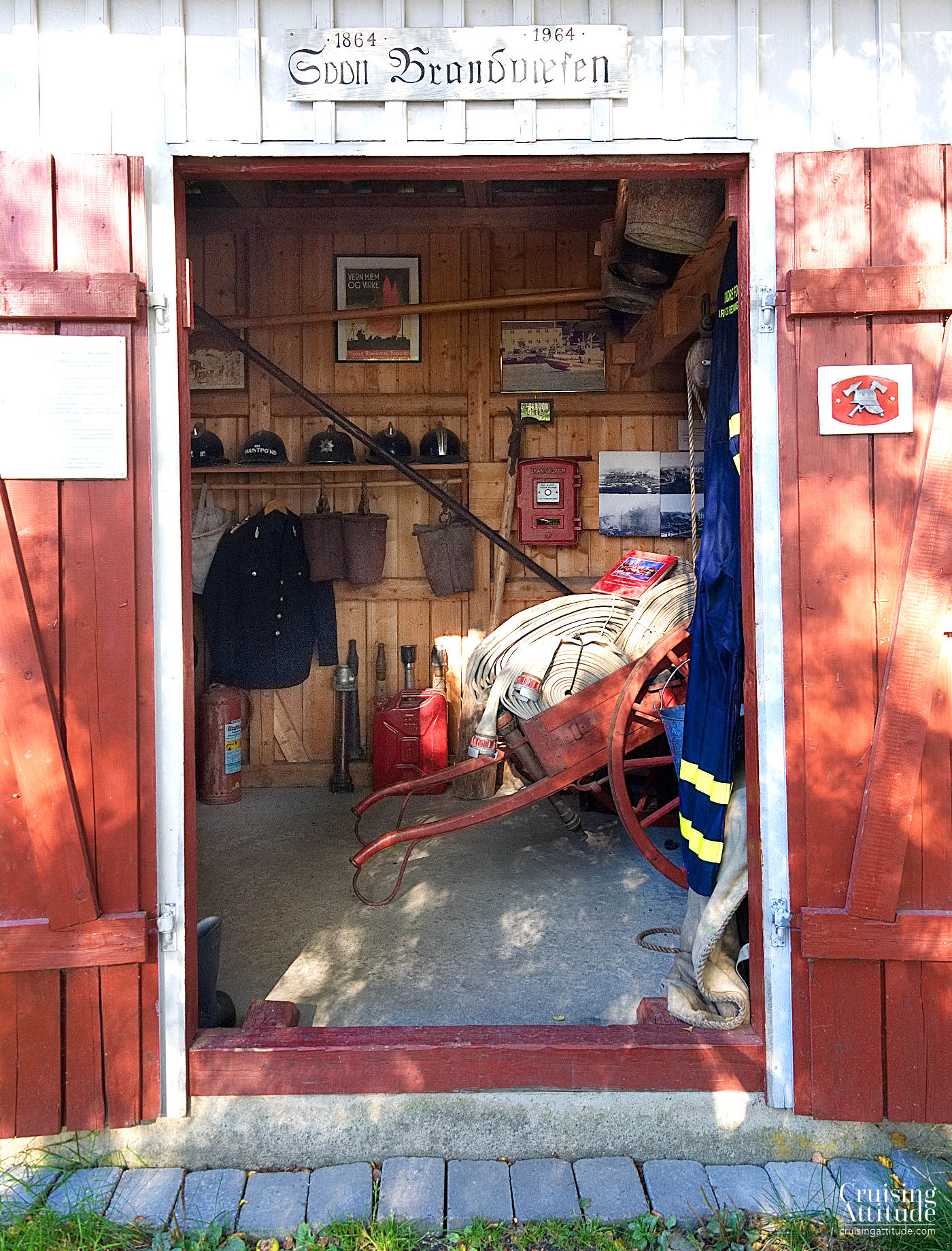 The fire brigade museum in Son 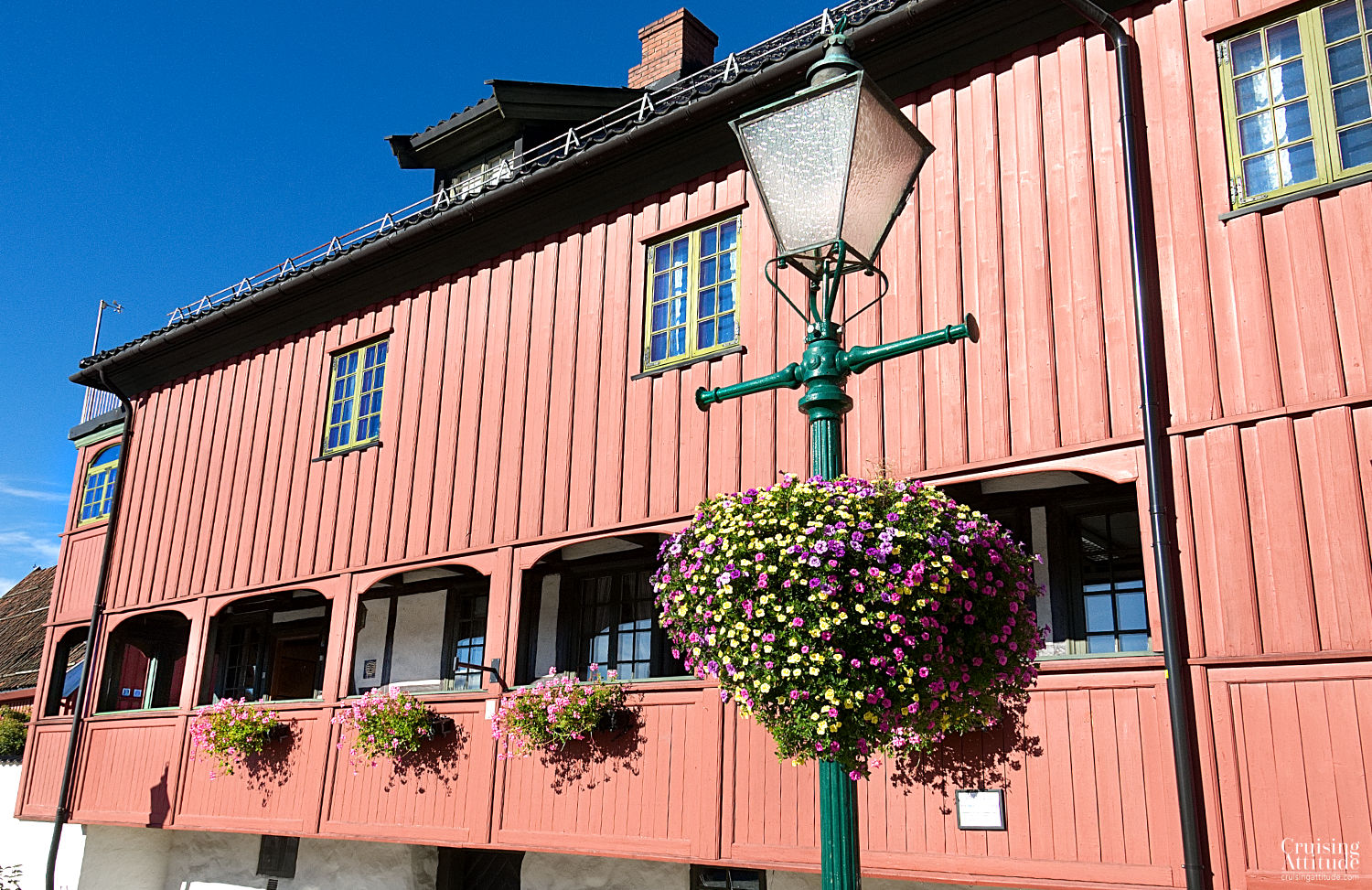 A view of the town square in Son

We will definitely come back to this lovely marina town! 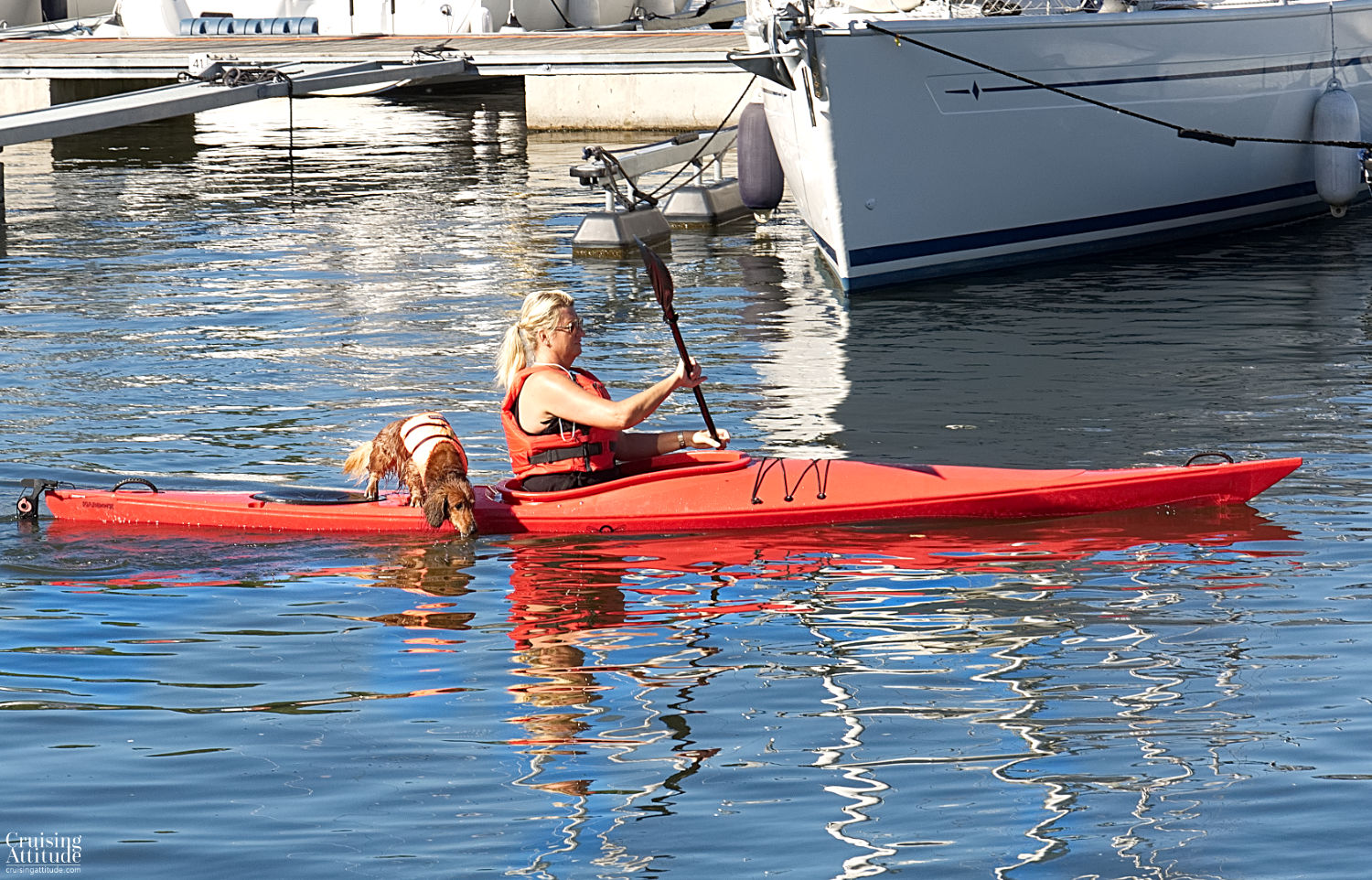 This dachshund was out for a ride on mom’s kayak.

This marina is open all year ‘round, with lower prices between around mid-September to mid-May.

Prices: 250 NOK to 500 NOK depending on the size of the boat.  We paid 500 NOK for Freja (55 feet).  A warning about prices — if you reserve a place with Dockspot, the price is 100 NOK higher than the official price.  We reserved our first night with Dockspot. It was 600 NOK instead of the official prices of 500 NOK. 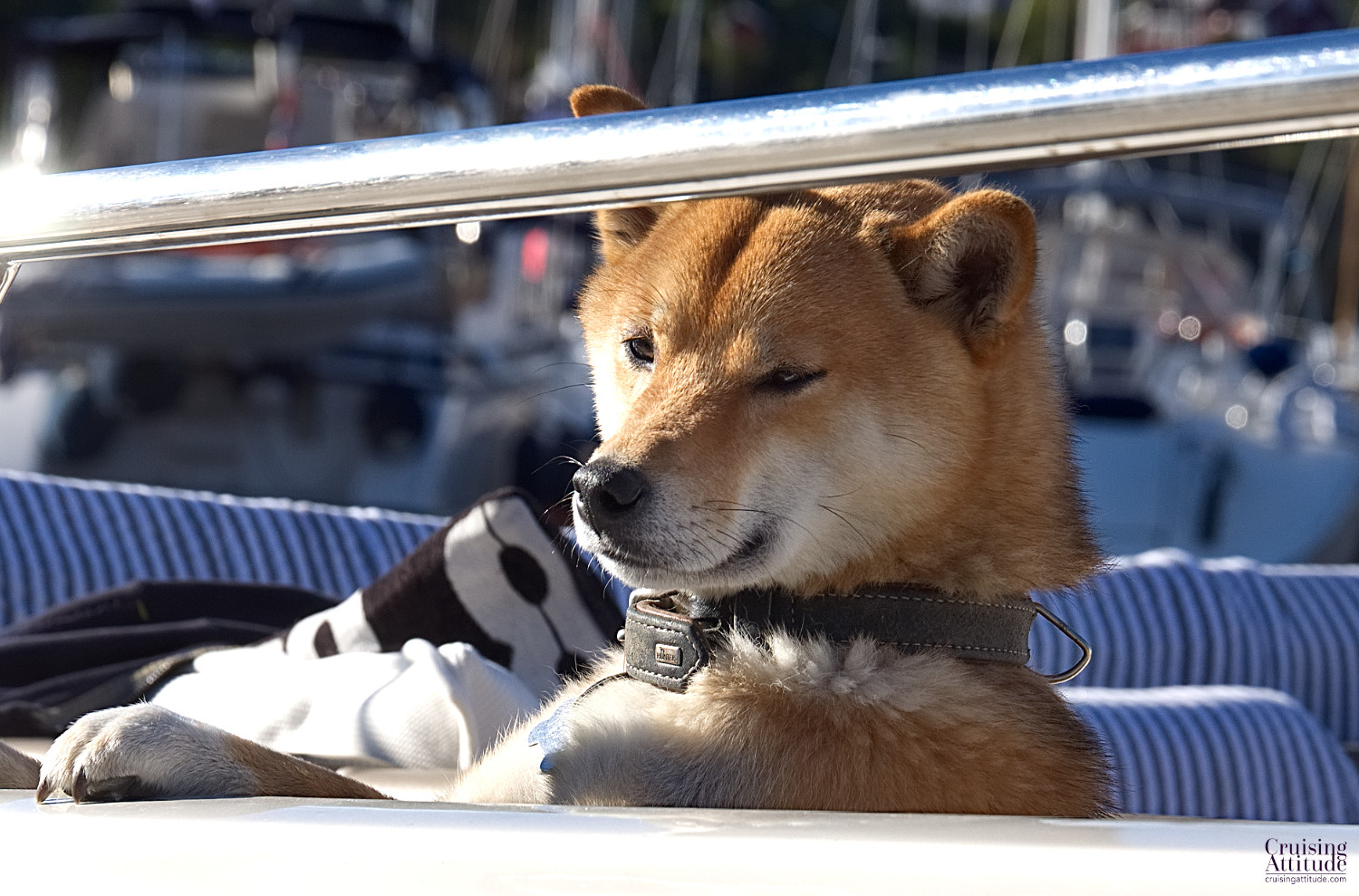 This cutie was waiting for his owners to get back to the boat.

This anchorage is extremely well- protected from winds and seas from all directions.  It’s located on the north side of the island of Seiløy (Sail Island!).  Getting to anchorage is a bit tricky, no matter if you’re coming in from the night or south, so pay attention — there are underwater rocks on both sides of the channels.

The nature is that of a typical outer archipelago island — mostly smooth, rounded granite and small bushes and trees. It’s easy to find a warm rock for sunbathing if that’s your thing.  The anchoring holding is excellent — we brought up lots of sticky mud on or anchor.

If you prefer marinas, there is a small marina close to Fredagshølet called Bukta Gjesthaven.

A view of the small marina near Fredagshølet called Bukta Gjesthavn