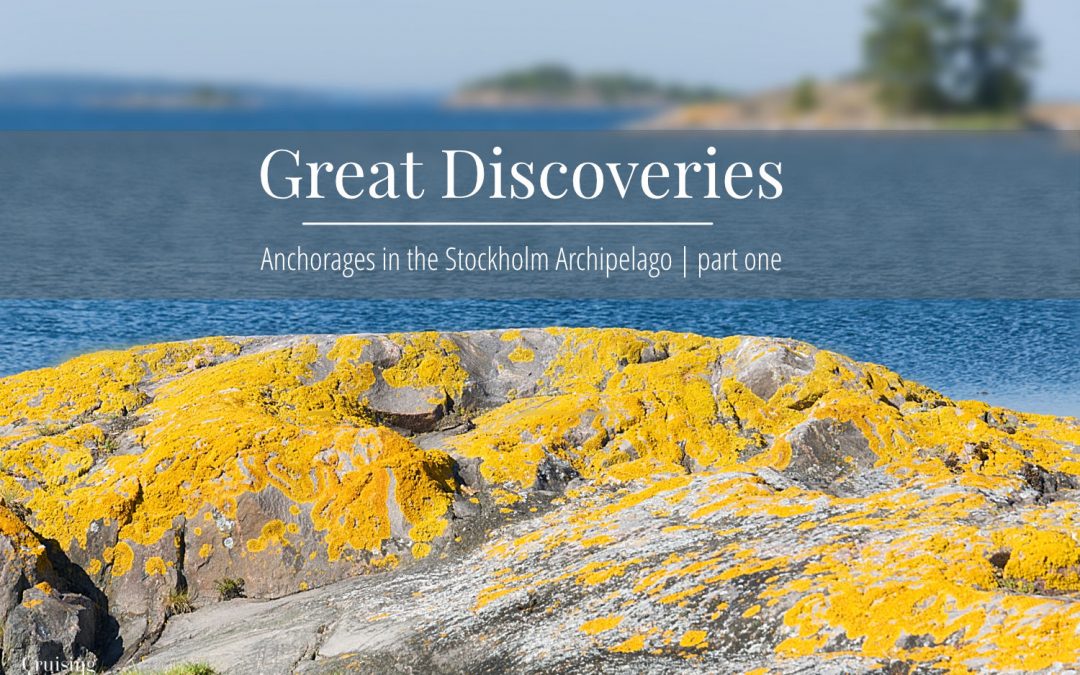 After spending a day at the marina in Oxelösund, we were once again northbound for the Stockholm Archipelago.  But before I get into the anchorages, I’d like to provide a short review of one of the two marinas in Oxelösund, because it’s a good stop for provisioning if you want to spend the next week or so at anchor.  Oxelösund is the home of a big steel works, so it’s not exactly the most beautiful place you’ll see in Sweden.  There isn’t any smoke pouring from smoke stacks, so the air is clean — it’s just not a very pretty site.

You can chose between two marinas in Oxelösund. We stayed at “Oxelösunds Gästhamn” – it’s the closest one to the center of the small town – about a 15 minute walk.  The other one is the Femöre marina. It’s farther away from town but has the advantage of having a restaurant right at the marina.

Sorry about the lack of photos, but it was raining hard while we were there!

The Oxelösund marina provides great service!  We were met at arrival by a young man who showed us the best place to come alongside and took our lines.  Although the marina doesn’t have a restaurant, it does have a small café that serves cold and hot drinks, snacks and — ice cream!  All of the staff were kind and very helpful.  The large ICA Kvantum supermarket in town has just about everything you’d need to provision, and it’s open from 8.00-21.00 every day.  For those who hate to cook, there’s a good choice of ready-to-eat or -heat selections from the deli counter. It was still Swedish strawberry season, so we loaded up on some (a lot!) from a local organic grower.

The routing from Oxelösund to Ringsön takes you through a fabulous part of the east coast archipelago chain.  Be sure to pass through the “Stendörren” (stone door) on your way to Ringsön.  It’s amazingly beautiful and it’s appreciated by all Swedish sailors who pass through.

Going through the Stendörren (the Stone Door) passage.

We discovered Ringsön with our friend and coach, Leon Schultz back in 2015.  It’s a huge anchorage providing shelter from all winds.

At anchor in the southern part of Ringsön.

The nature at this anchorage is exquisite, seemingly untouched by man.  We had a short swim, but the water was still rather cool at 18°C.

The weather had cleared up considerably.

The route from Ringsön to Rånö takes you past the Landsort lighthouse, one of the most famous ones in Sweden.  It also marks the southern limit of the Stockholm archipelago.  You’ll also notice more  summer cottages and fishing cabins on the islands, as we are now getting closer to Stockholm.

The inner route takes you past Nynäshamn, a medium-sized town know for its huge ferries to both Gotland and Latvia.  The marina is right next to the ferry terminal.  If you didn’t stop in Oxelösund to provision, you can do so in Nynäshamn, which is a bigger town with a greater choice of shops.

We actually tried to anchor up at the island of Nåtterö, famous around Stockholm for its sandy beaches.  We tried five times to get our anchor to hold in the cove called Östermarsfladden. To no avail – there was just too much thick seaweed growth on the bottom.  Each time, it seemed to hold, but as soon as we got to around 1,600 rpm during our backing down process, we started to drag. Since we’re not happy until it holds at 2,200-2,500 rpm, out we went!

We saw on the charts that Rånö seemed to have a well-sheltered bay called Rånöhamn.  It’s sheltered because the entrance is quite narrow, just as it is at Ringsön.  It then opens up to nicely sized harbour.  It’s great for all winds except for hard northerly.  Just be careful not to anchor on the east side – there’s an underground cable there.  Our Spade held on the first try, at about 10 meters’ depth.

Summer cottage at the Rånöhamn anchorage

One helpful tip — avoid the urge to explore the island of Ängsholmen on the east side of the anchorage.  Cows are kept there and attract horse flies.  If you’re bitten by a horse fly you certainly know it!  Ouch.

The route north from Rånö to Mörkviken on the island of Fjärdlång takes you past the wonderful marina of Utö.  You can read about it in this post.

Beautiful summer weather on the way to Fjärdlång

The views are just incredible in the archipelago!

Mörkviken turned out to be perhaps a favourite anchorage in the Stockholm archipelago.  There are actually two parts to this anchorage — a small inner harbour which is perfect if you want to anchor up the “Swedish way” (two lines ashore with a stern anchor), and a much larger outer harbour – perfect for dropping your anchor off the bow.

That wonderful moment after the anchor is dug in, you’ve filled in your log book and you’ve gotten the dinghy in the water.  Jacques takes Senna out while I wait onboard to  really make sure the anchor isn’t moving  anywhere.  We usually wait an hour before leaving the boat unattended.

If you chose the inner harbour, you need to hug the western cliff face quite closely to get past the two underwater rocks.  We noticed that most of the to-land/stern-anchored boats were using the finger-shaped out-cropping on the southern edge of the anchorage.

The inner part of the Mörkviken anchorage

Our anchor held on the second try, in about 12 meters’ depth.  It was now time to get Senna into the dinghy and take her to one of the islands to take care of her “needs”.  Afterwards, it’s time for a swim. She loves to swim and we’ve started to follow alongside in the dinghy.  It’s great exercise and the low salt content in the Baltic waters doesn’t leave her sticky and crusted with salt.

Senna getting her exercise

It was midsummer — the weekend following the summer solstice — and everyone was celebrating with BBQs, herring and potatoes, music and lot’s of drinking.  We ended up staying here for three days — it’s just that lovely.  We worked on boat maintenance (mostly cleaning and polishing) had a few short swims and explored the anchorage by dinghy during long sunny days of midsummer.  It’s not always sunny and warm during mid-summer, but in 2016 it was!

View towards the entrance of the anchorage.  Our boat Freja is on the left.

The beautiful midsummer light at about 10.30 in the evening.