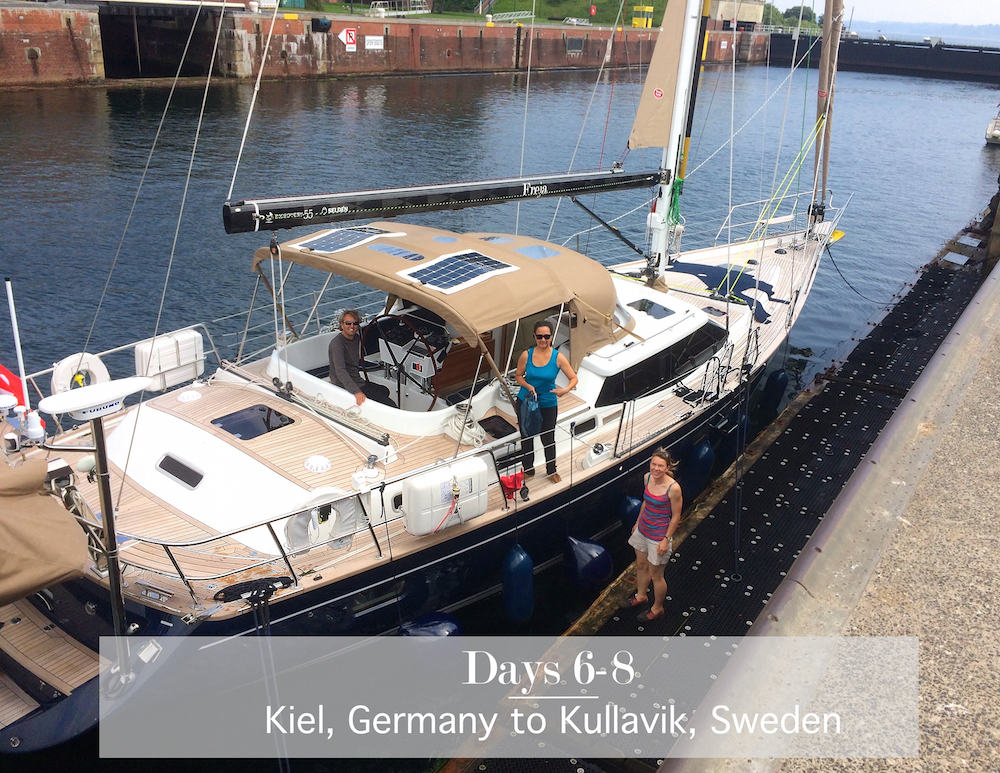 The rain and thunder of the previous night was forgotten as the sun appeared in a clear blue sky on our 6th cruise day. We were disappointed at not being able to stay one more day in this charming town and marina. But we needed to be in Ellös, Sweden by Wednesday evening and it was now Sunday.

We arrived at the Kiel-Holtenau side of the canal at around 11.00 and after a short 30-minute stay at the waiting pontoon, we received the signal to proceed into the lock. This is the side on which you pay the transit fee (41 Euros for our 16 meter boat).  The kiosk where you pay is a tiny market – it sells milk, bottled drinks, snacks and newspapers. 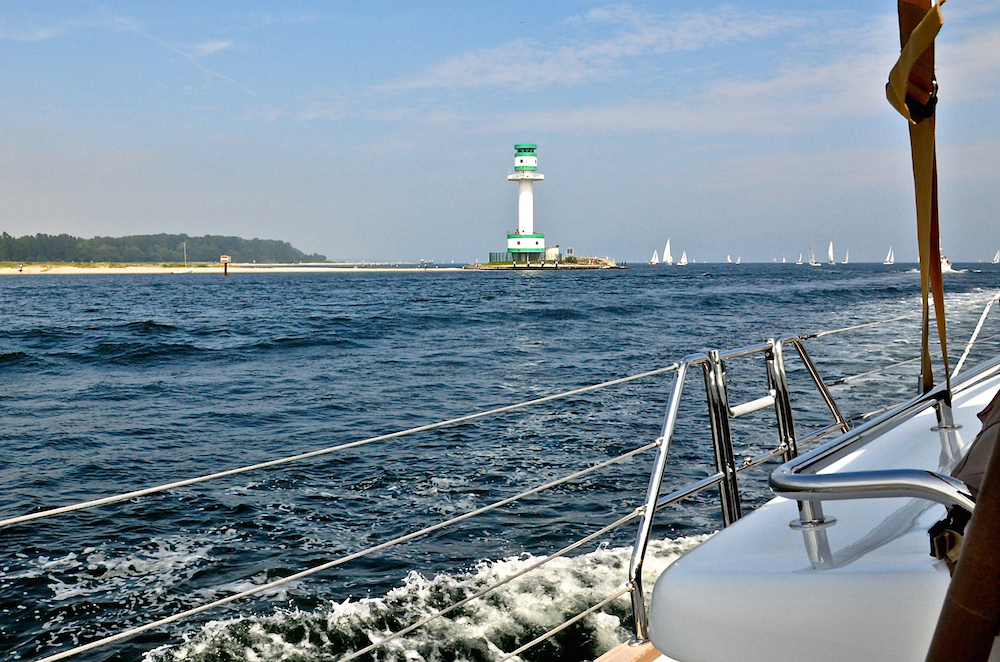 Finally in the Baltic Sea after exiting the Kiel Canal at Holtenau.

After exiting the lock at Holtenau, just north of Kiel, we were finally in the Baltic sea!  We were now in the Kiel Fjord, famous for the Kieler Woche regattas, the largest annual sailing event in the world.

The first thing we needed to do after exiting the canal was to find the marina with the fuel station Axel told us about while we had dinner in Rendsburg.  He said it was the least expensive one in the area. That’s important when you’re filling 800 litres of diesel!  It’s the “Hafen Strande” in the town of Strande. 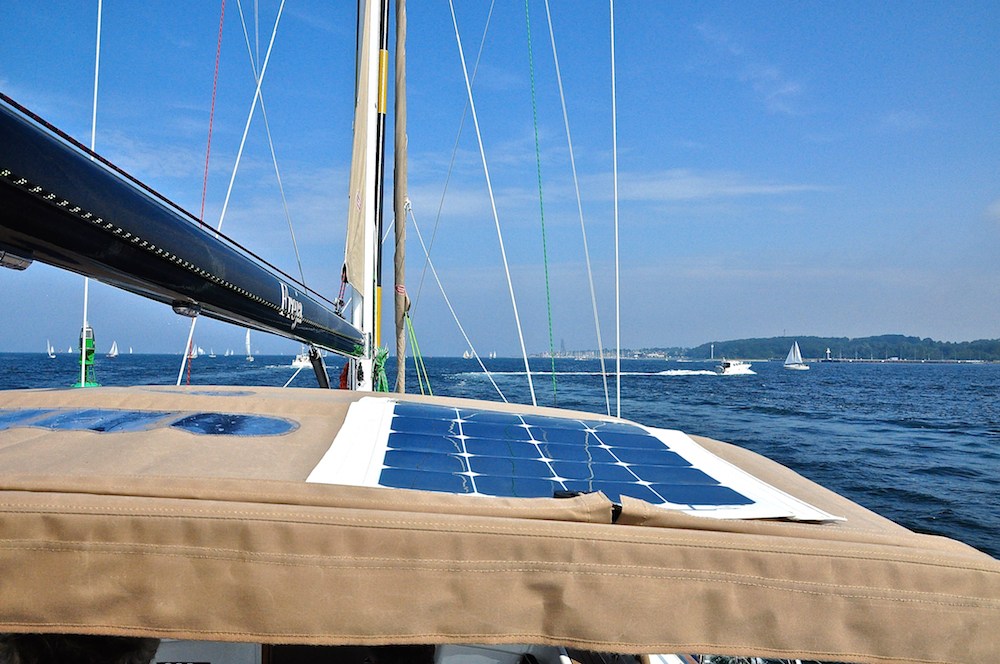 View towards Laboe on the eastern side of the Kiel Fjord. 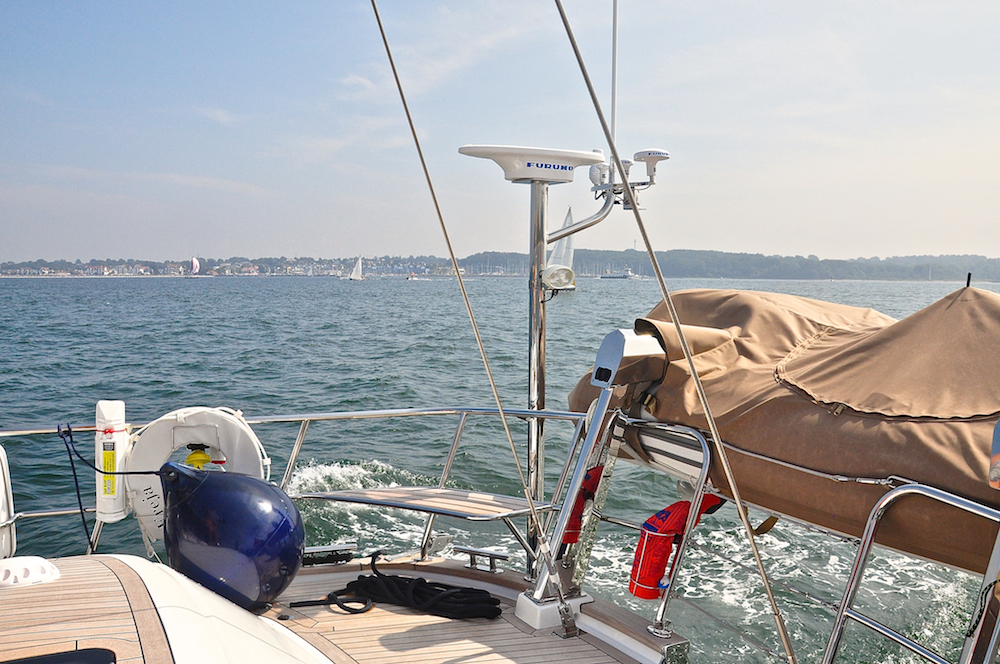 Another view of Laboe, on the other side of the Kiel Fjord.

It was about 13.00 by the time we left the fuel station at Strande and turned northeast toward our route through Denmark. The plan was to sail towards Stora Baeltet (the Great Belt) between the islands of Fyn on the west and Sjaelland on the east. The wind was increasing from the east and we planned to find either an anchorage or a marina on the way with sufficient shelter. 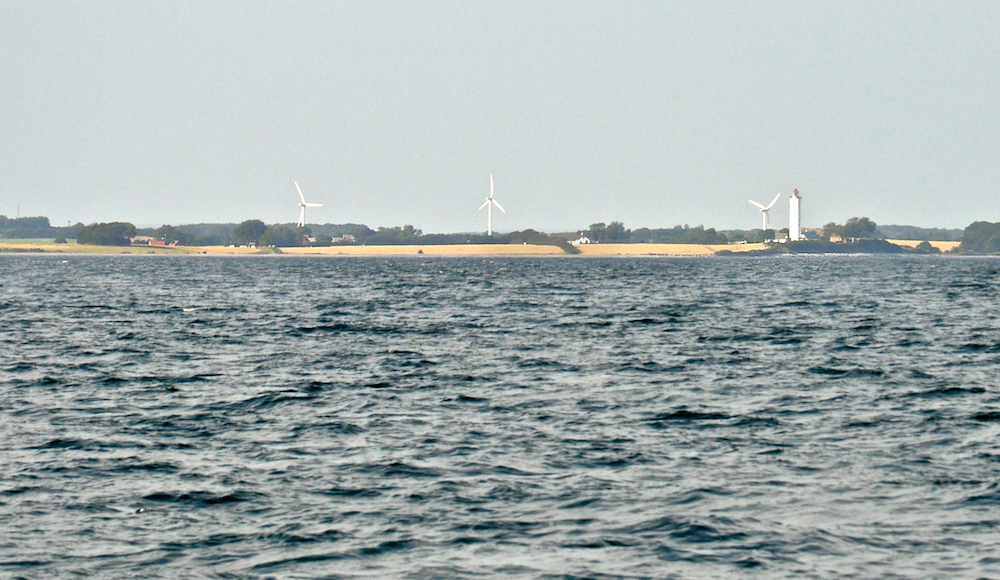 A view of the Danish island of Langeland. Wind generators are everywhere in Denmark.

Using the book Cruising Guide to Germany and Denmark and the handy marina guides that came with our paper charts (NV Charts, Germany), we began be checking out anchorage possibilities. The islands close to our route however, were either too low to provide shelter from the wind (which was now gusting to 30 knots) or had shallow water — too shallow for our draft of 1.8 meters. We continued up through the fairway towards the bridge over the Great Belt (Storebaeltsbroen), the 18-km long bridge between Fyn and Sjaelland, thinking that we’d surely find a suitable marina or an anchorage on the way.

By 19.00, we still hadn’t found a harbour, so we decided to just keep going through the night until we arrived at the island of Anholt the next day. Anholt is a great jumping off point to sail east to the Swedish coast.

At 22.00 we started our 4-hour shifts — first Mark and Liz, then Jacques and I. The night passed rather uneventfully with the exception of the passage under the bridge, which was lit like a Christmas tree.  It was truly a fantastic site from the water. By 6.00, the wind had increased slightly – we were now getting gusts of 35 knots from the east, but we had been protected from any heavy swell by the peninsula of Sjaellands Odde just east of us. By the time Mark and Liz were up for the morning watches we were getting waves of 3-4 meters.

Jacques and I were now off-watch and decided to try to get a couple of hours of sleep. After about an hour, I was awakened by the feeling we were changing direction. We had been on a northerly course and with winds from the east, I had been sleeping up against the lee cloth, when suddenly I rolled fully onto the mattress. We had tacked and seemed to now be on a broad reach towards the west.

Mark and Liz had decided that it would be a prudent idea to take shelter at Grenå as the winds were now gusting to 40 knots but forecast to drop off that afternoon. After a quick check in the harbour guide, we decided to go for the marina in Grenå.  The ferry/fishing port was our back-up choice if the marina entrance was too difficult to enter (the wind and waves were going right into the marina entrance). A few hours rest in the harbour would give us a chance to have a good meal and a rest before continuing that afternoon.

We attempted to get into the marina but saw from a distance of around 500 meters that it would have been too dangerous. The 3-meter high waves were crashing violently against the outer marina wall. We entered easily as the entrance faces north instead of east. The possibilities for tying up were limited as we hadn’t yet prepared a fender board and the harbour walls are definitely not made for pleasure boats with gelcoat hulls. We finally agreed that the best idea was to snuggle up against a huge dredging vessel. It was so tall, its bulk had created a spot out of the wind and we were able to raft up relatively easily.

We then kept one-hour watches as we were afraid of chafe on the mooring lines. We had almost a lot of swell in the harbour and the banged-up, rusty steel dredger was not exactly mooring line-friendly. I was happy we had bought two enormous round fenders – they were exactly what we needed here!

After a few hours rest and a hot meal, we set out for the Bønnerup marina/fishing harbour on the north side of the peninsula. Its entrance faces north, so Bønnerup, a two-hour sail from Grenå, would provide us with decent shelter throughout the night. The entrance to Bønnerup marina is flanked by seven enormous wind generators. They certainly were providing a return on investment with the wind we were getting! 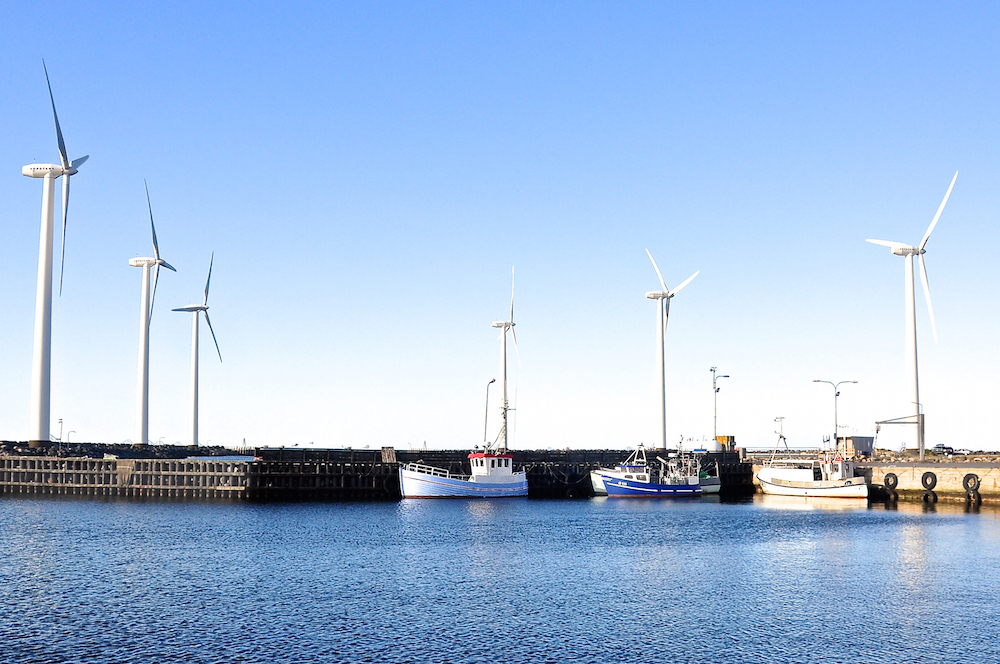 We phoned the harbour master as we approached. There were no more berths in the marina! Everyone was waiting for the wind to decrease, and even the fishing boats were not going out. We were directed to the fishing boat side of the harbour. Once again, we were happy to have those huge balloon fenders to protect our gelcoat from the rusty steel pontoon where the boat delivered their catch! 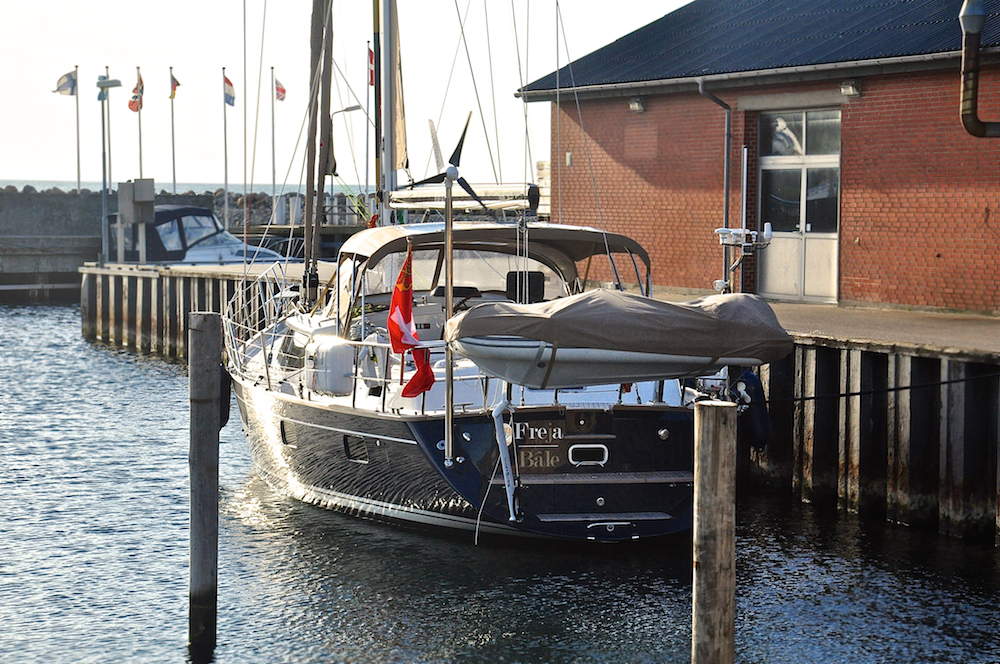 Freja tied up to the fishing boat quay in Bønnerup.

One good thing about being on the fish-delivery quay, we were completely sheltered from the wind behind the fish hall – where the fish is deposited, smoked, packed and sold. We had dinner in the cockpit whereas the boat owners in the marina, in the direct path of the wind, stayed below. 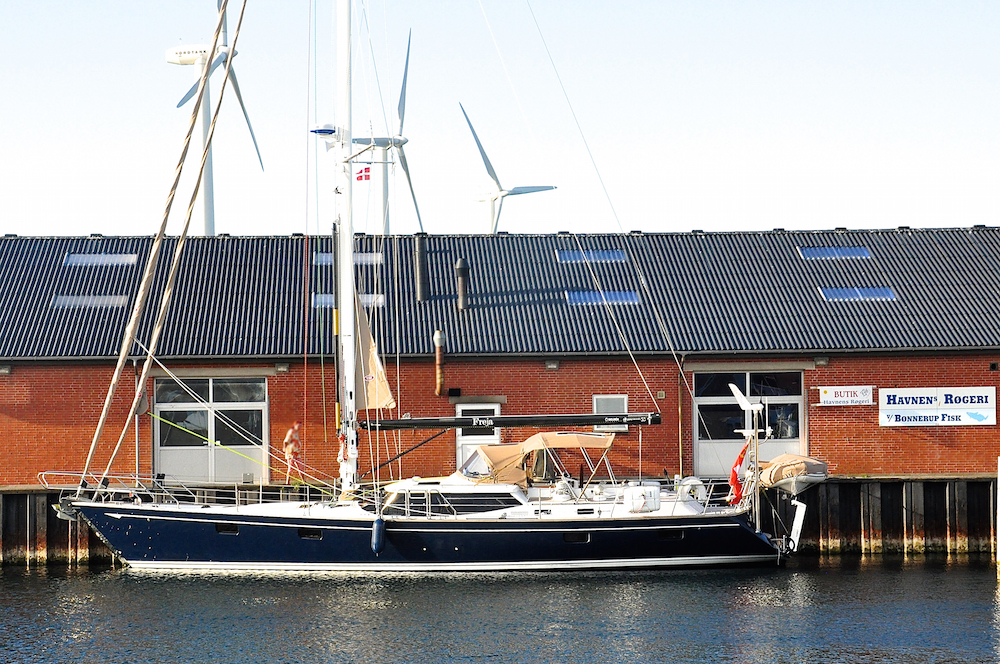 Freja in front of the fish hall in Bønnerup Harbour.

By the next morning, the wind was beginning to decrease in strength and down to around 25 knots from the southeast.  We got an early start – we wanted to arrive to Kullavik, Sweden by late afternoon. 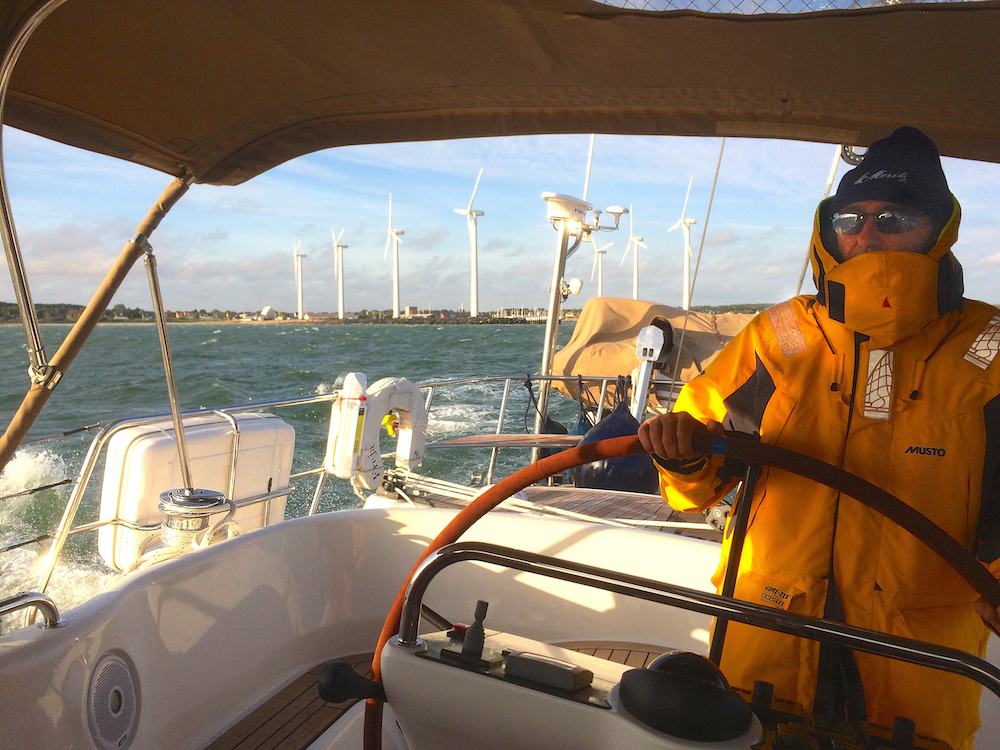 Wet and windy morning in Denmark.

Why Kullavik?  Because Mark had been in contact with a swedish journalist who wanted to test sail the boat.  The journalist, Joakim, offered us a berth in his home marina, Kullavik, south of Gothenburg.

The weather was windy but fabulously sunny as a strong high pressure system had moved in over Sweden.  We were all impressed by the beauty of the skerries around Vrångö as we approached the coast.  The sailing was getting more and more comfortable as the swell decreased. I was so happy to be back in Sweden! 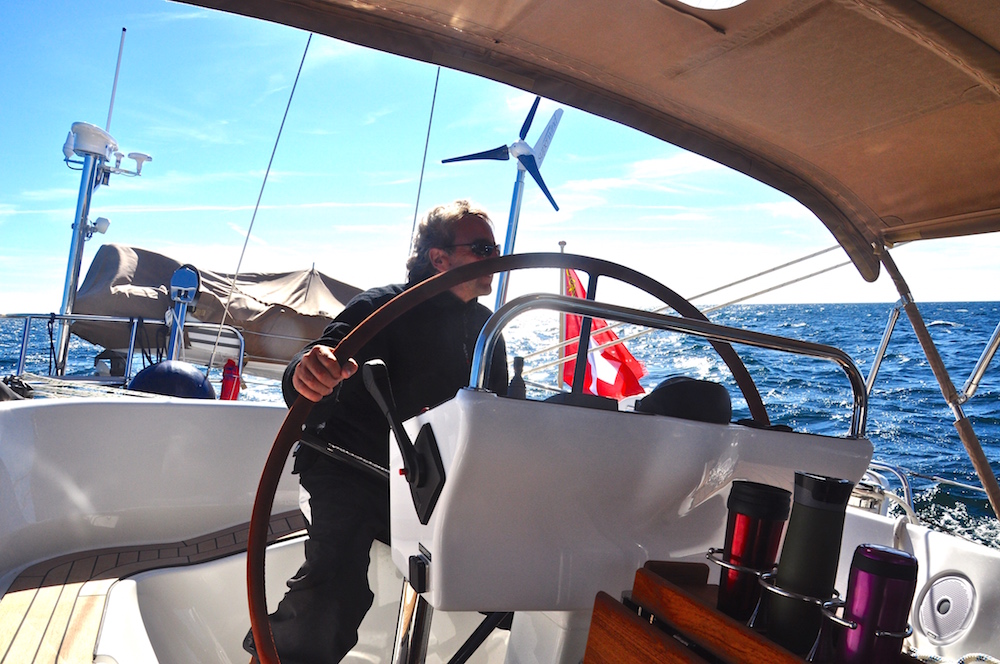 Sailing towards the west coast of Sweden 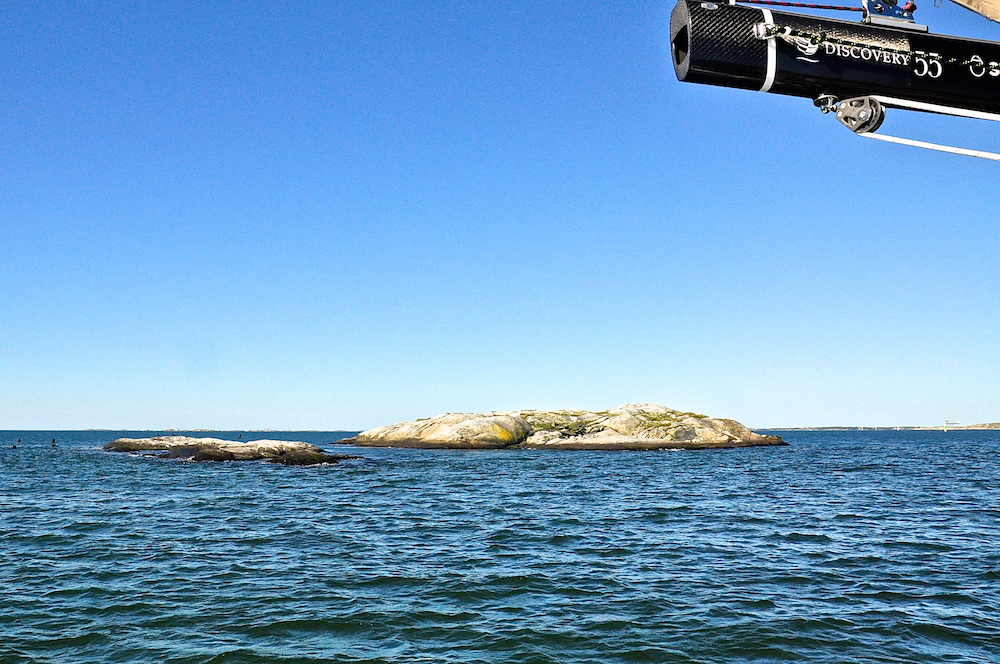 We arrived at the charming marina of Kullavik just after 16.00.  Joakim met us at the marina entrance and directed us to a mooring which was generously offered to us for free.  And then Joakim lent us his car so that we could visit the local supermarket!  Generosity abounds here! 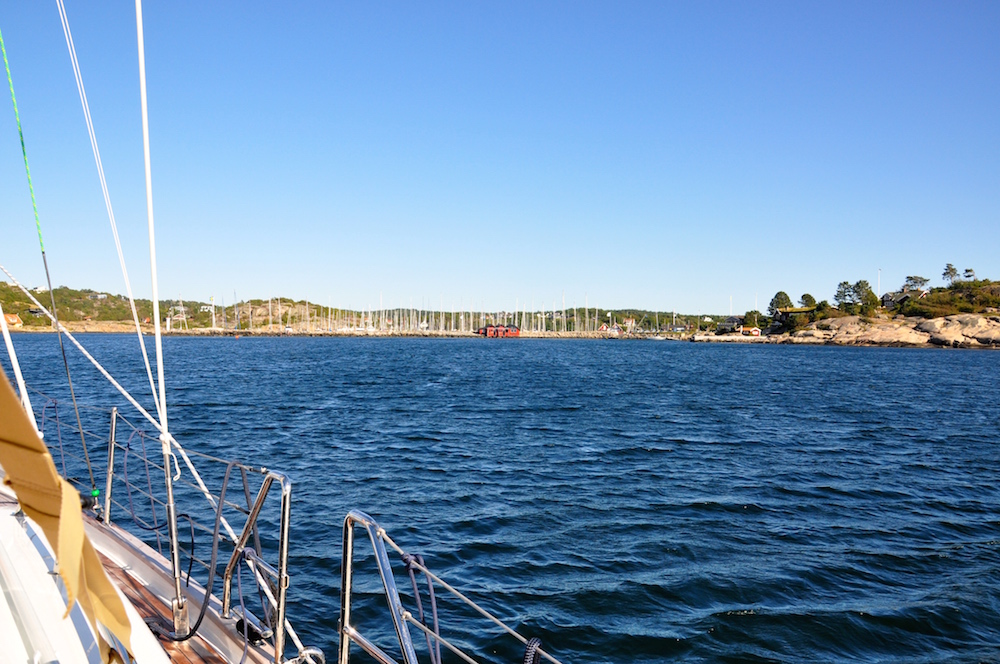 Approaching Kullavik. The red building is the boat club sauna.

I stocked up on some of my favourite Swedish food and drink: Ramlösa Citrus mineral water, Skagenröra (a prawn dish) Västerbotton cheese and Kalix löjrom (Bleak roe or caviar from the Bothnian Bay in the Baltic). Yum!

After giving Freja a nice fresh-water rinse – she hadn’t been cleaned off since she left Southampton – we prepared for dinner.  We had invited Joakim to celebrate our arrival in Sweden and opened a bottle of chardonnay to drink with the appetisers, and a bottle of Merlot to drink with dinner – both from our vineyard.  Skål! 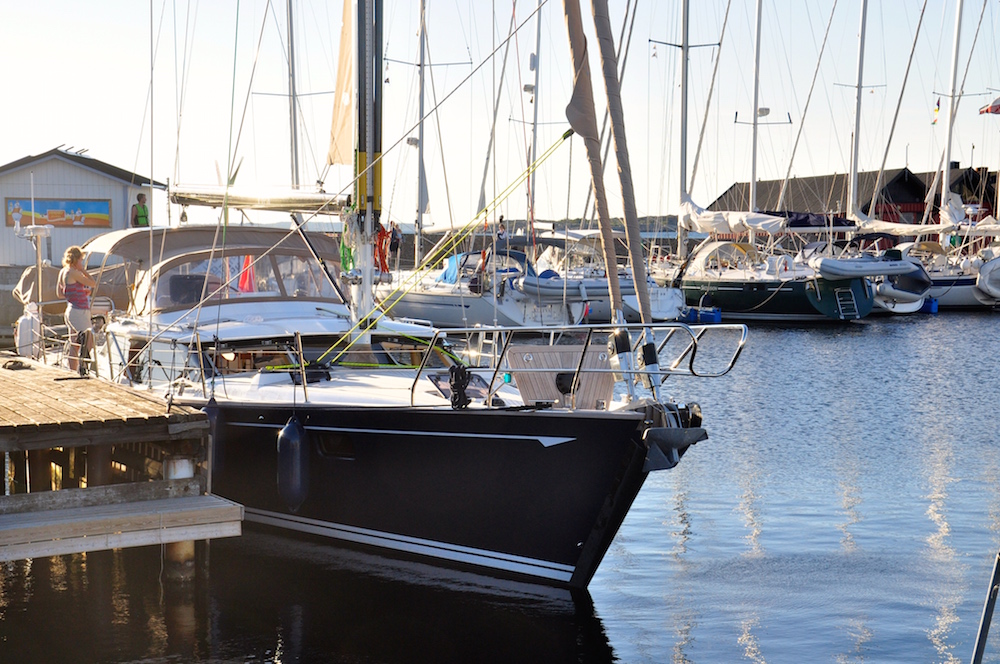