It was the first night of the cruise with no sailing, no wind, no thunder, and no swell.  We all slept like logs.

I finally had access to Swedish breakfast food after yesterday’s supermarket run. As I giddily opened the jars of Swedish herring called Varbergs Drömsill and Fjällbaka Kräftgravadsill, the others just turned away, saying “ugh, how can you eat fish at breakfast?”  I replied “you should try it. If you just knew how delicious it was!”

Joakim arrived after breakfast to join us for the morning’s test sail.  He brought along his wife, Emma, and presented us with two of the anchorage/marina guides called Havneguiden (Norwegian for Harbour Guide). He and Emma wrote and photographed the Swedish guides called Hamnguiden number 8 and 9.  We were thrilled and hugely grateful because they are superb guidebooks loaded with high-quality overhead photos and diagrams showing where underwater rocks and shallows are located. They also show the best anchoring places and the location of facilities such as recycling and trash containers, toilets, and access to fresh water.

We sadly left Kullavik marina (it’s a delightful place and we heartily recommend it) and set off for an island with a dock to let Jacques and Joakim off so that they could take photos of Freja. 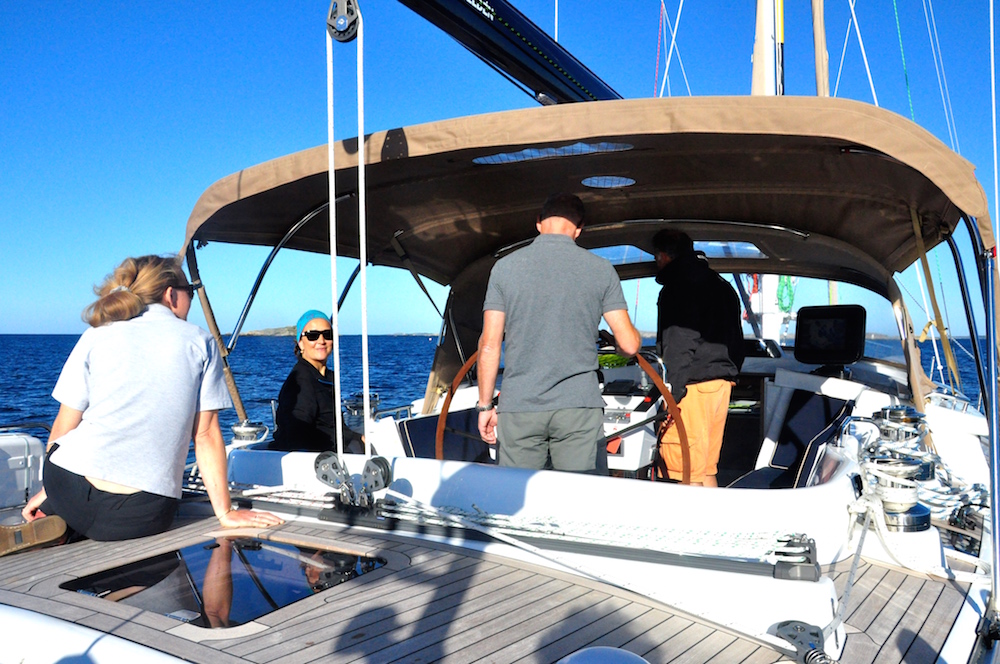 Sailing out of Kullavik with Joakim at the helm. 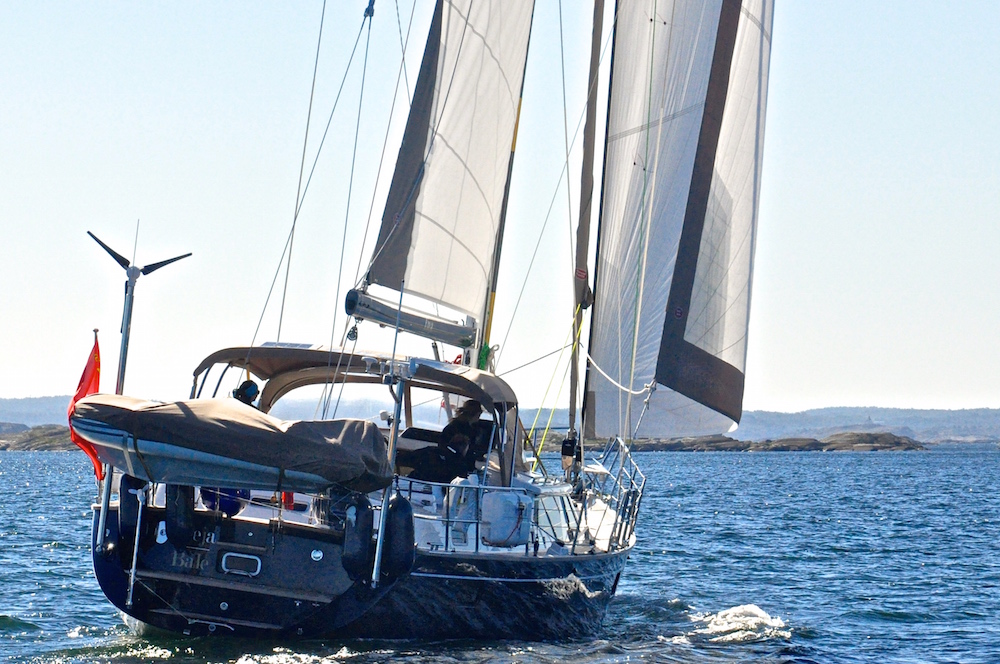 One of the photos taken during the “photo session”.

After the photo session, we continued to sail up past the mouth of the Göta Älv, the river that flows out of Gothenburg, through a gorgeous archipelago landscape through to Marstrand.

Sailing past the island of Kalvsund, near Gothenburg.

Marstrand is known as the Cowes or Newport of Sweden.  The Volvo Ocean Race had a leg end/beginning from here during the 2008-09 race and we saw the VO 70 Telefonica Blue go aground on an underwater rock just minutes after the start.

We sailed to Marstrand using the inner fairways instead of approaching from offshore.  It’s so much more interesting to sail past one little seaside village after the other.  Instead of just seeing water, sky and the coast and islands in the distance, you see children and dogs playing, people having coffee on their patios, kayakers paddling, and fisherman preparing nets or arranging their lobster pots.  You can even smell the coffee and cinnamon buns as you pass yet another café in a narrow passage.

The easiest way to sail the inner passages in an archipelago is use the paper charts (in Sweden, the Båtsportkort) together with the plotter.  The paper chart gives you a quick overview of the next few miles and you can keep the electronic chart zoomed in to your immediate position so you can see the underwater rocks or shallows coming up in the next mile.

I know there are sailors who say that paper charts are obsolete these days, but using both kinds of charts means you don’t have to zoom in and out all the time on your plotter.  You could have two chart plotters of course, one with a raster chart zoomed out for the overview and one with vector chart zoomed in, like we saw on a Flemming motor yacht.  But I’m still quite attached to my paper charts. Even if you don’t like to use them, they’re a back-up if you lose power to your electronics.

Entering the Albrechtssunds Canal on the way to Marstrand

We had actually never been to the island of Marstrand and I don’t have a good reason why.  Perhaps it’s because when you visit from land, you have to leave your car/motorcycle/the bus on the Koön (Cow Island) side of the harbour and take the ferry over. We had imagined it being a long ferry ride (it isn’t).  Anyway, it’s a shame that we’d skipped it, because it’s an awesome place with a real summer/yachting vibe. 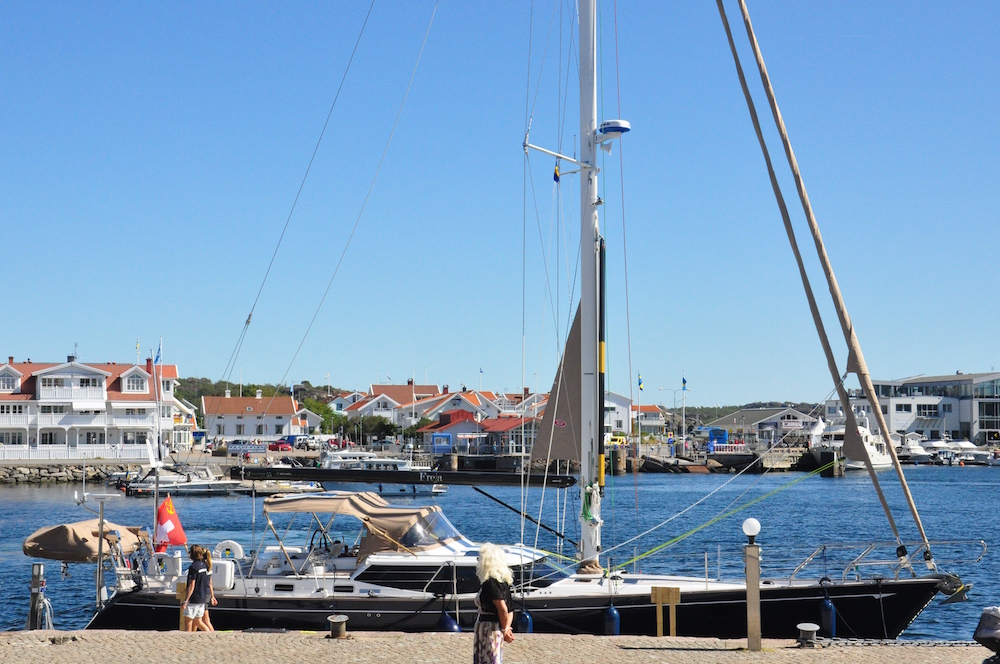 We moored just in front of the Marstrands Wärdshus, and Mark snagged the last table on the sunny deck. We ate a delicious west-coast seafood lunch and had a fantastic view of all the boat traffic through the harbour. Joakim showed me “inner way” to get to Ellös on the charts which I’d brought with me to the restaurant.

Sailing through the  Jungfruhålet passage

We wanted to get to Ellös by 17.00 so we said good-bye to Joakim and cast off our lines for the last part of our journey. We passed through some very narrow fairways that seemed only just wide enough for two boats to pass each other – something that one doesn’t see very often in the world.  One passage, called Jungfruhålet, has a part that seemed only wide enough for us, with our almost 5 meters of beam, to pass through.  I was grateful we didn’t have a boat coming through from the other direction!

We continued north past the the towns of Skärhamn and Mollösund, old fishing villages that have become mostly summer house towns for people in Gothenburg.

Another view of Mollösund. The windmill is still standing.

We arrived at the Hallberg-Rassy harbour at about 17.00 and had just enough time to “check-in” with the boatshow organisers, and get our berth, name tags and other papers for the show.  Tomorrow was going to be a long day as we had to thoroughly clean the boat, inside and out, to be presentable for the 3-day show.  After our more than 1,000 mile trip from Southampton, we though we deserved a glass of Champagne.  Skål for Freja and her crew for making it to Ellös in time! 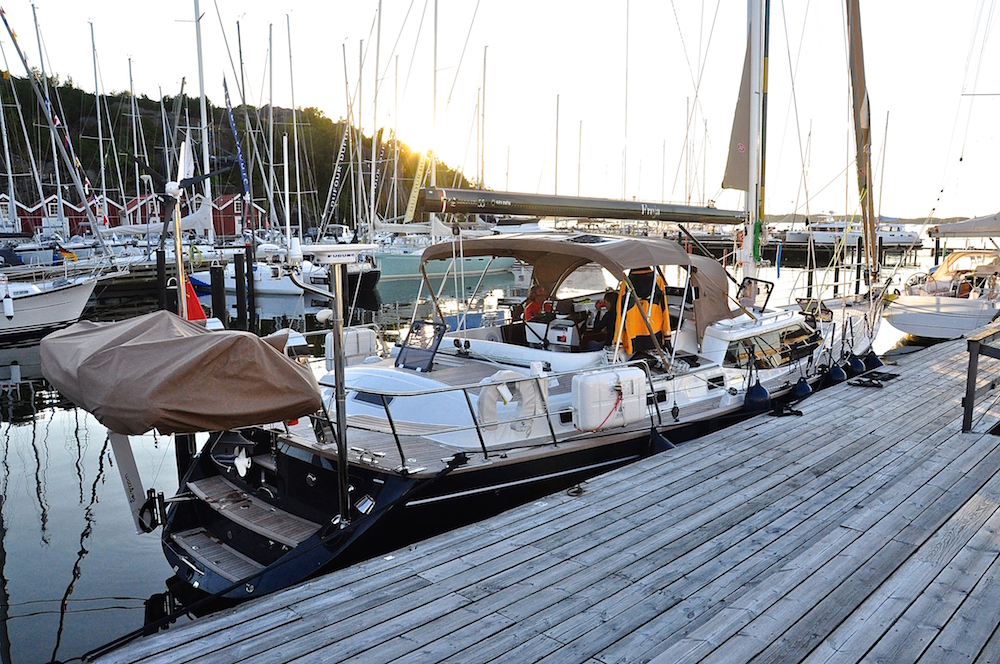 The End of Our Cruise – Moored in Ellös