Sailing in to Stockholm 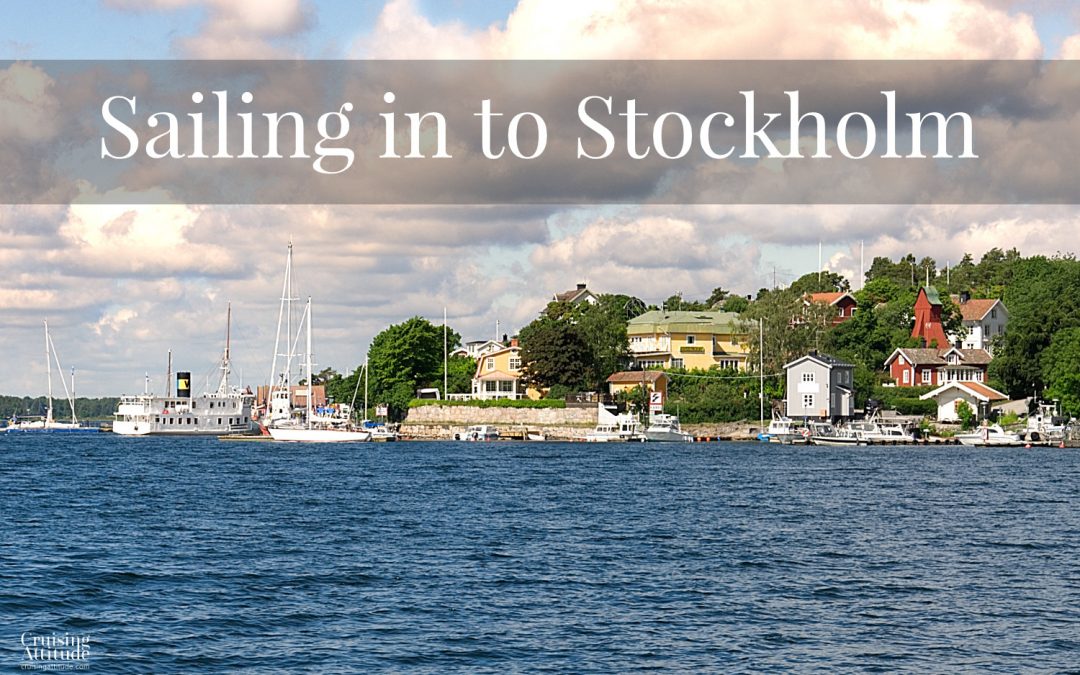 It was time to finally head in to Stockholm.  We had reserved a berth at the Navishamn on the island of Djurgården, close to the centre of town.

Sailing past a small island near Dalarö, about 3 hours’ sail from Stockholm

Stockholm is protected by an immense archipelago and the only ways to approach it by boat are from the south via Saltsjöbaden or from the east via Waxholm or Värmdö.  Since we were coming up from the south, and since we are not sailing a boat with more than 3 meters’ draught or 30 meters’ air draft, we were taking the southern approach.  All larger, taller and deeper-draught boats need to arrive via the Oxdjupet (Ox depths) or the Kodjupet (Cow Depths) passages. 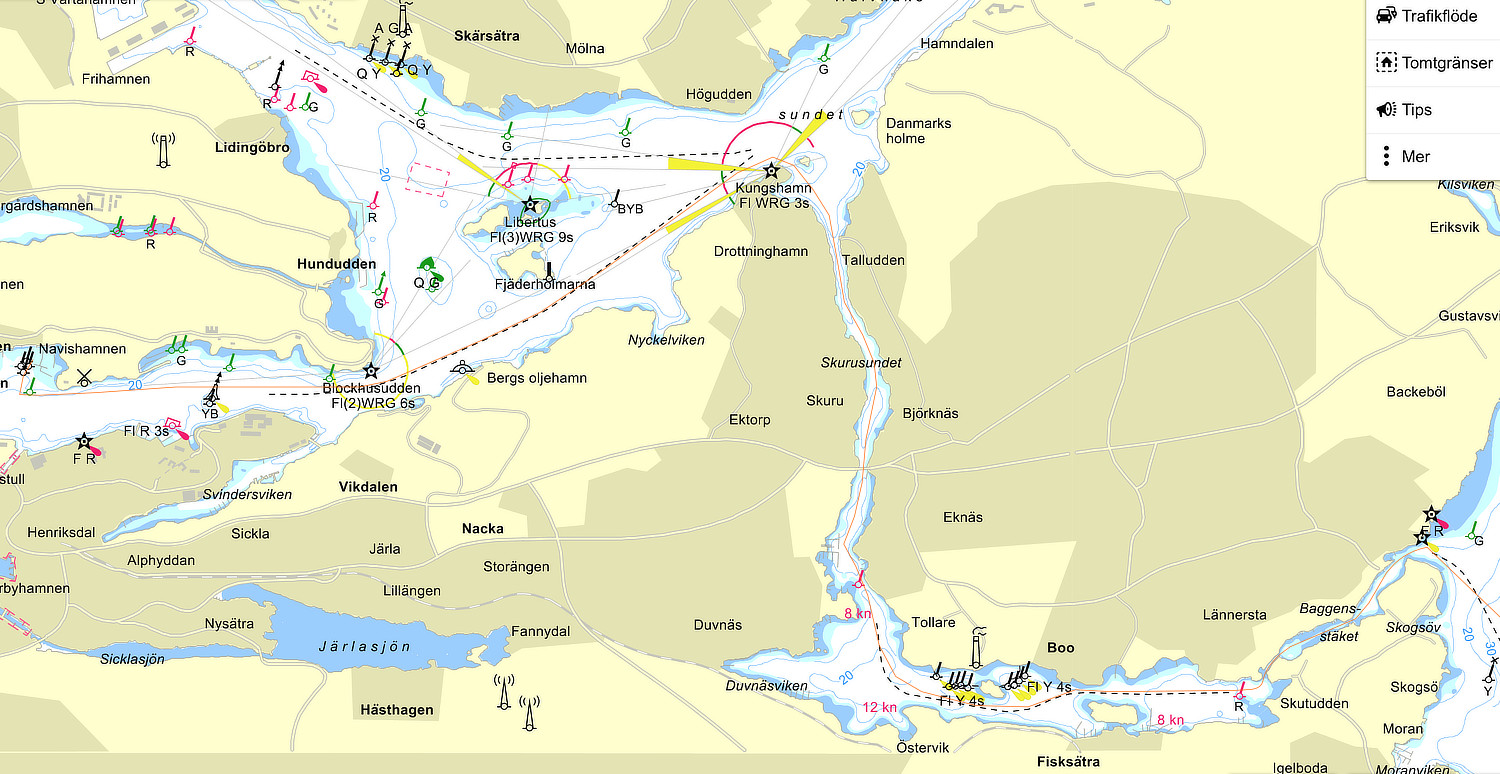 The southern approach to Stockholm 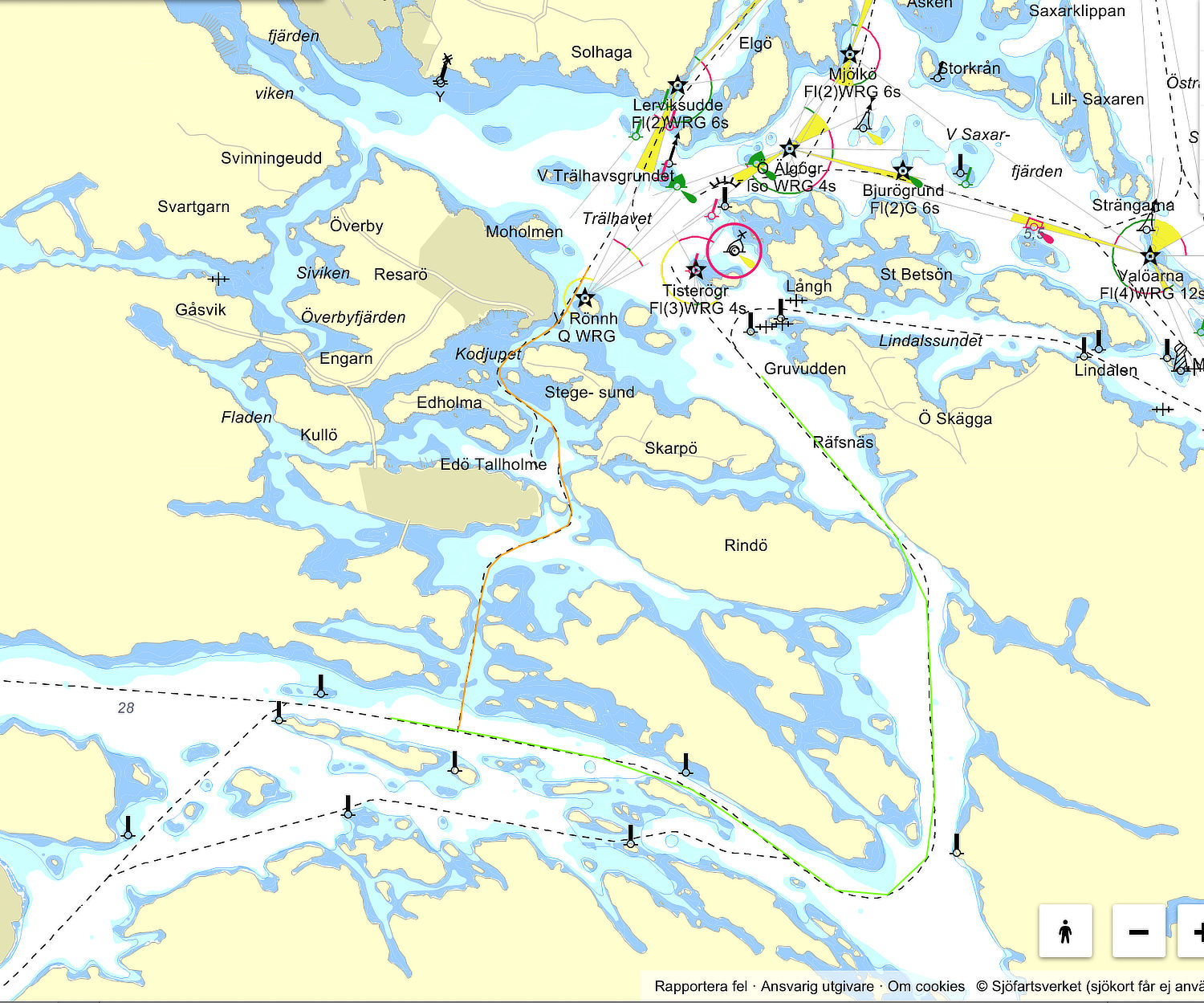 The eastern approaches to Stockholm. Most pleasure boats use the orange-coloured passage via Kodjupet.

We wanted to spend one more night at anchor before sailing to the city, so we selected the famous friday night anchorage of Napolenviken on the island of Ägnö, not far from Saltsjöbaden. 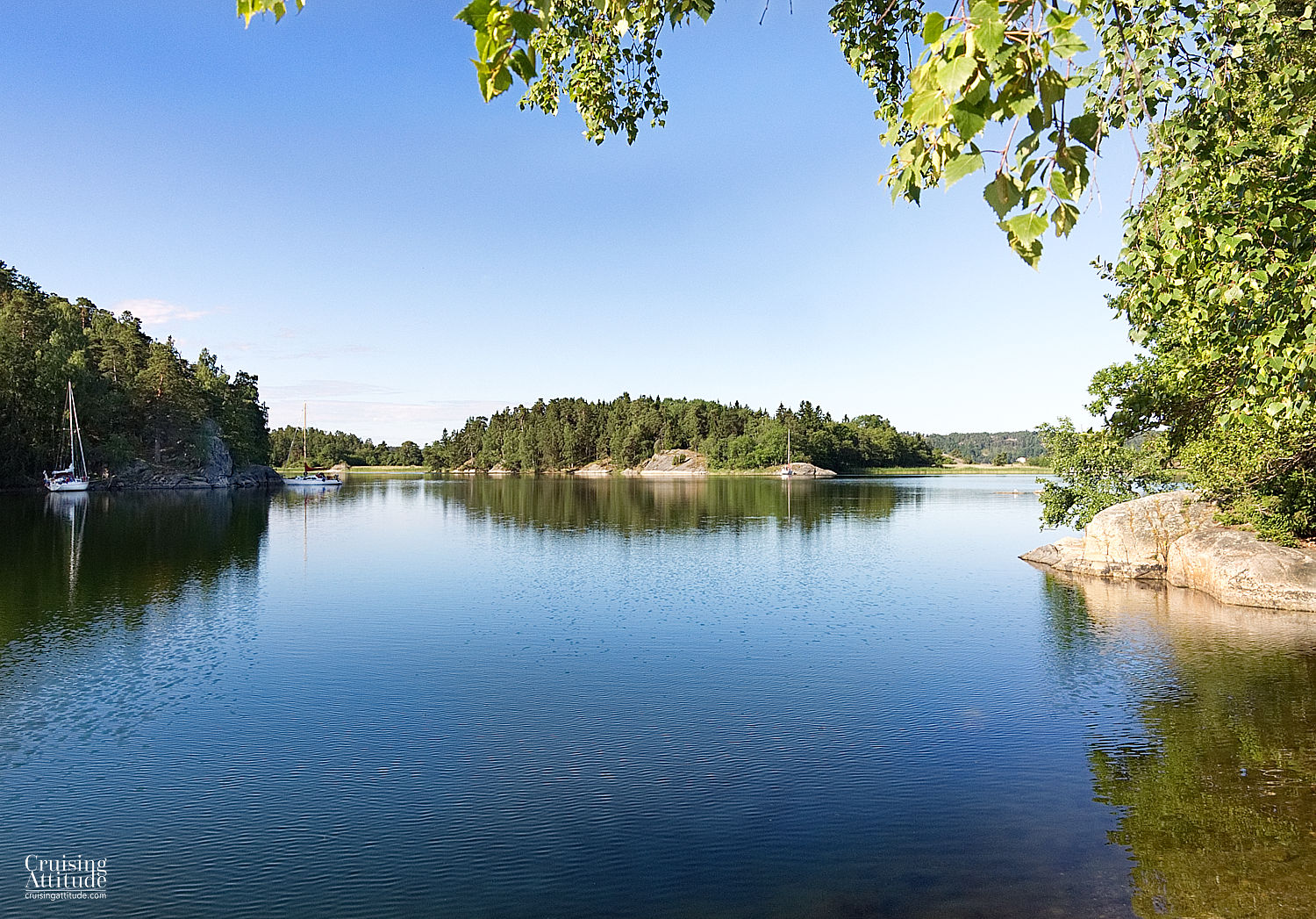 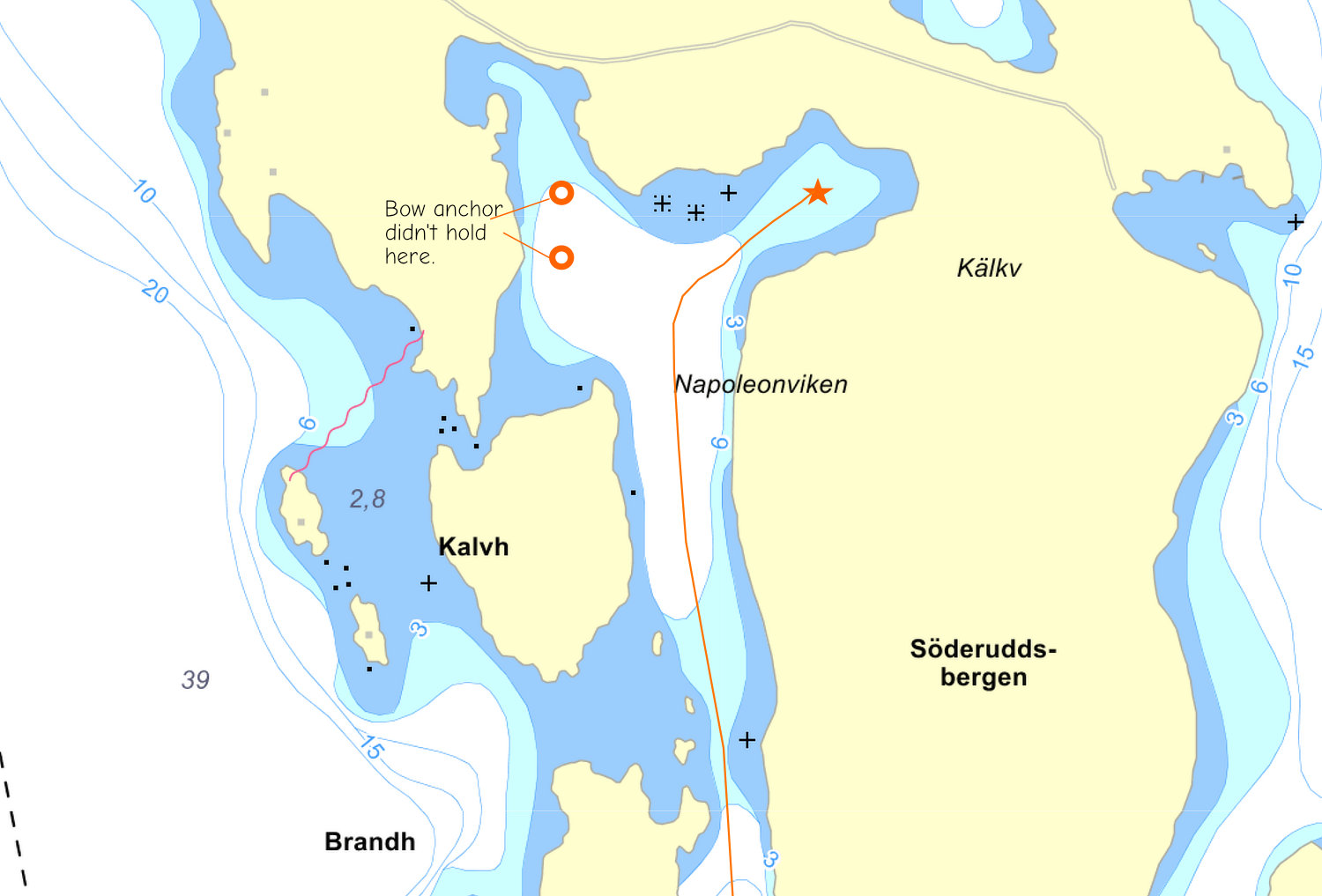 Napoleanviken is often used by sailors leaving town on a friday evening, as it’s only an hour or two from the marinas and boat clubs around Stockholm 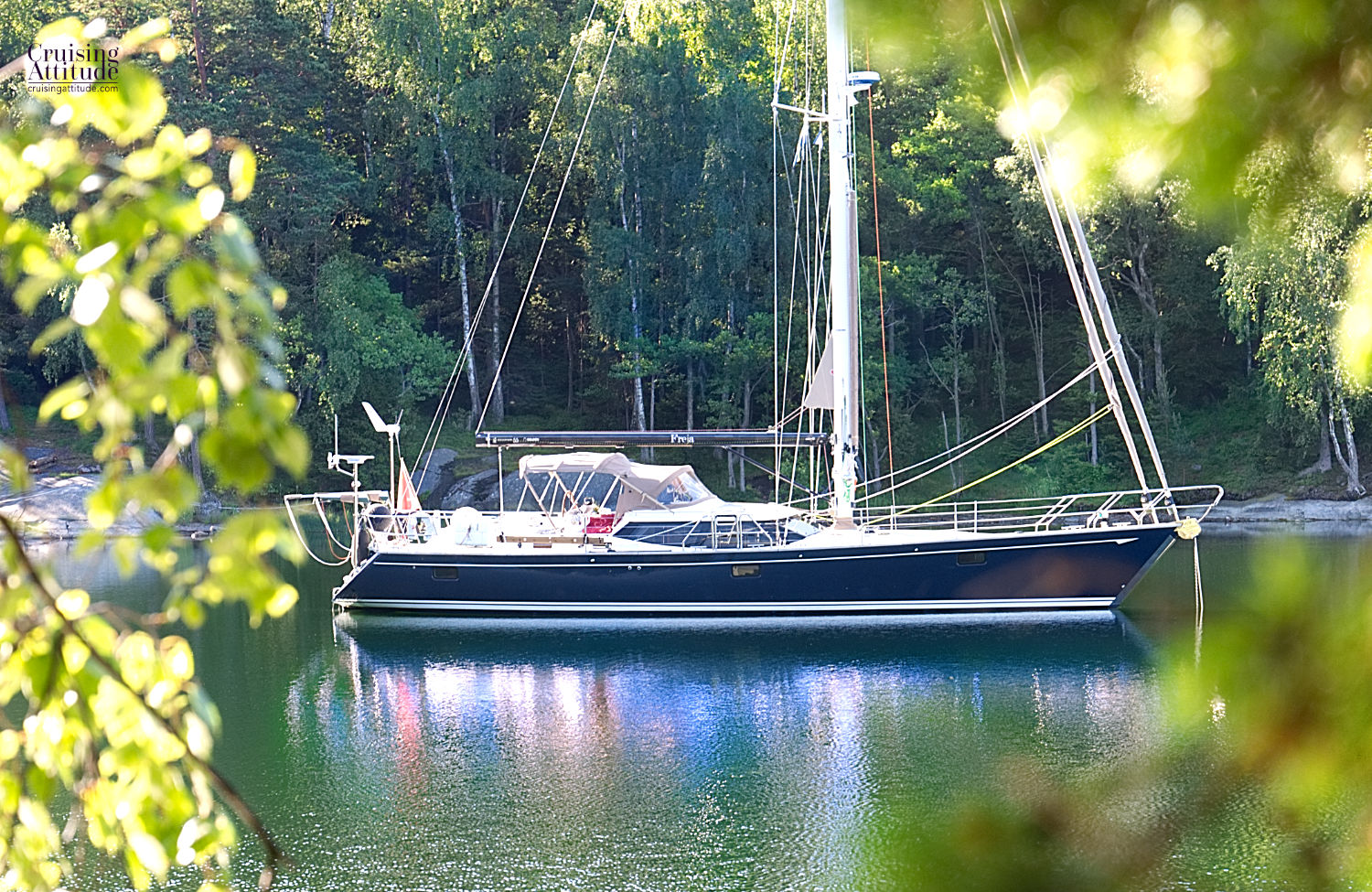 We were anchored in the tiny eastern side of Napoleanviken 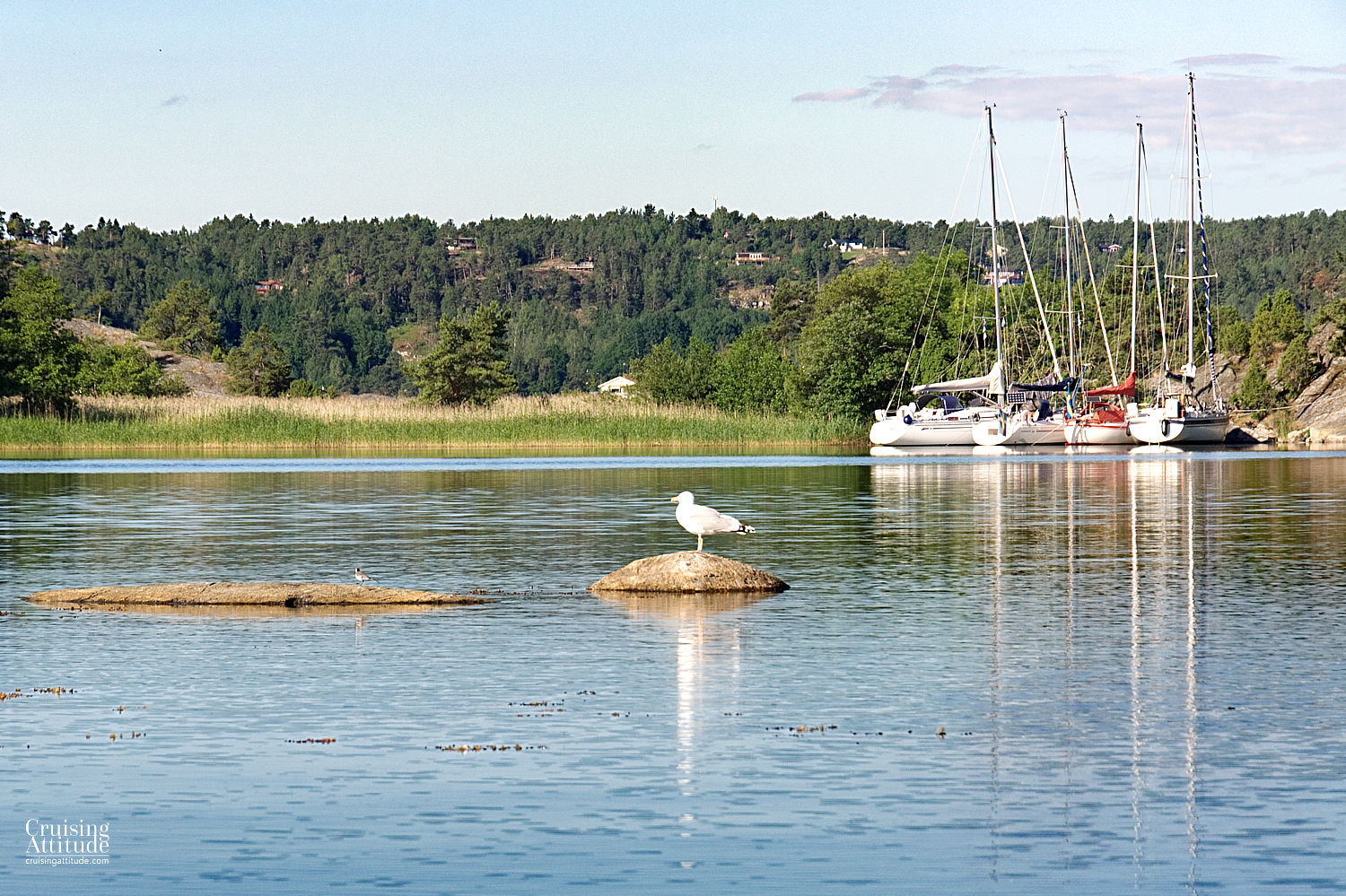 Looking towards the western part of the anchorage

It’s best to anchor here “the Swedish way” (two lines ashore plus a stern anchor) but there are a few good spots to lie with a bow anchor.  We tried several times in the wester part of the anchorage with no success. We finally got it to hold when we went into the eastern part.  If you can anchor with lines ashore, there are many spots for you.  I used lots of different spots when I lived here and had a 36-foot boat  that was easy to tied up to the shore.  We’re going to have to try with Freja next year! 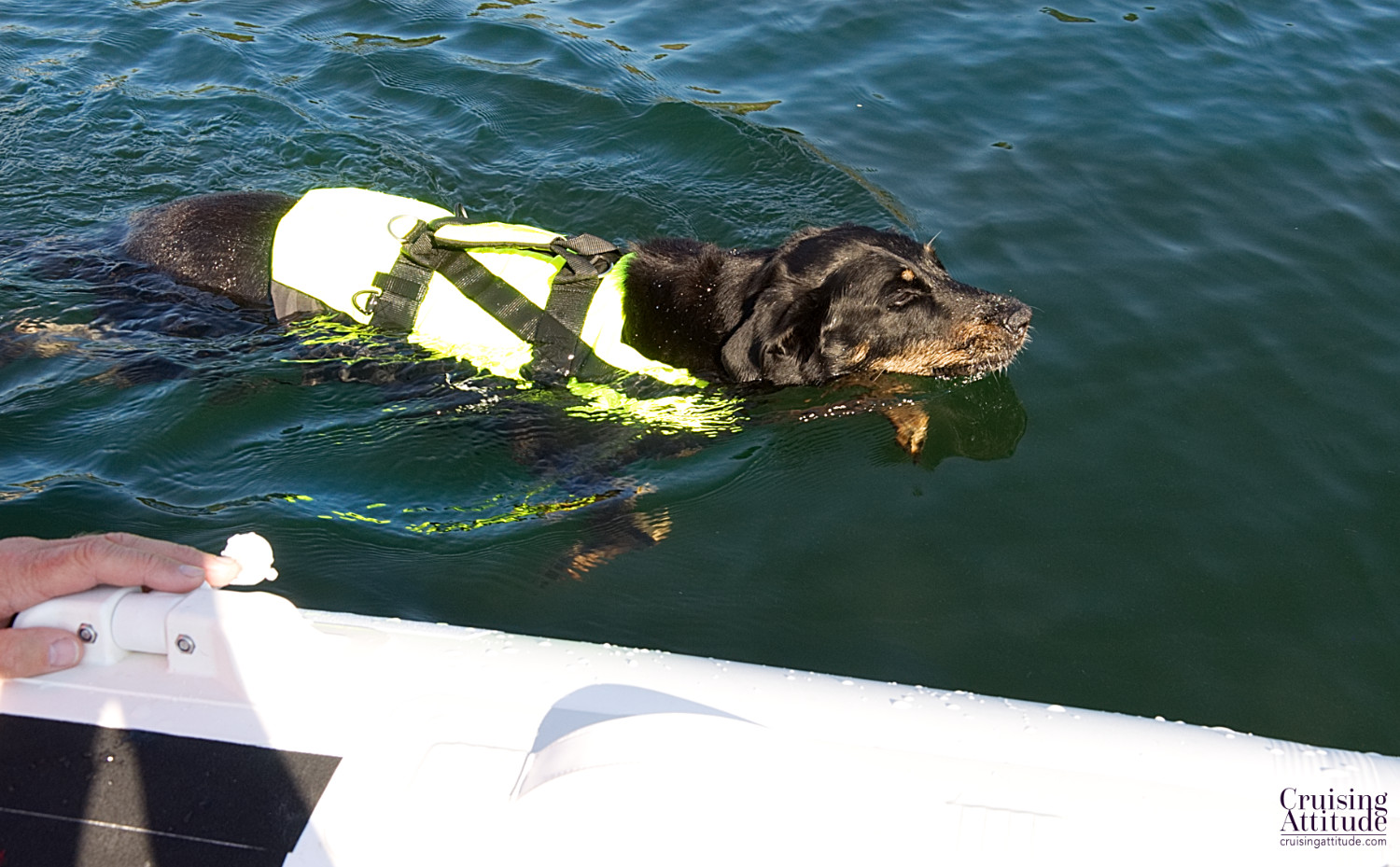 Senna enjoying her morning swim in the Napoleanviken 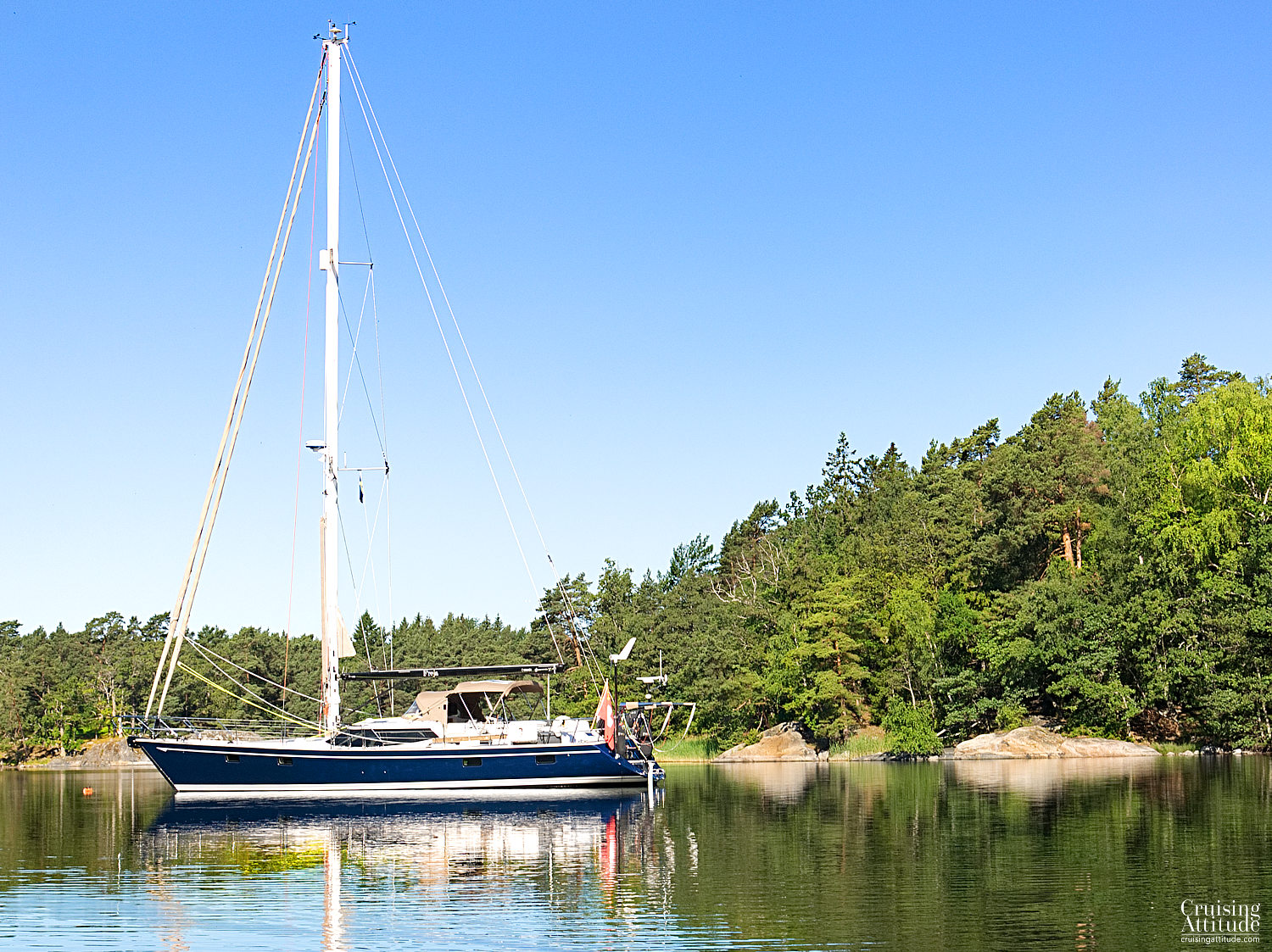 On a Friday evening, you would see lots of boats moored up to the granite rocks you see in the background.

To get to Stockholm from the south, you need to pass through two narrow canals (straits) — don’t worry, they’re wide enough for a steamboat to pass through!

The first canal/strait you’ll enter is called “Baggenstäket”.  The draught here is 3 meters, so most pleasure boats will be able to go through.  But if you’re floating around in a Swan 70, you’ll have a problem!

The second is the Skurusundet, which has a 30 meter bridge passing over it. This bridge is bow-formed, so if your mast is high, you’ll need to pass under the middle of it or you’ll won’t get the full 30-meter clearance! 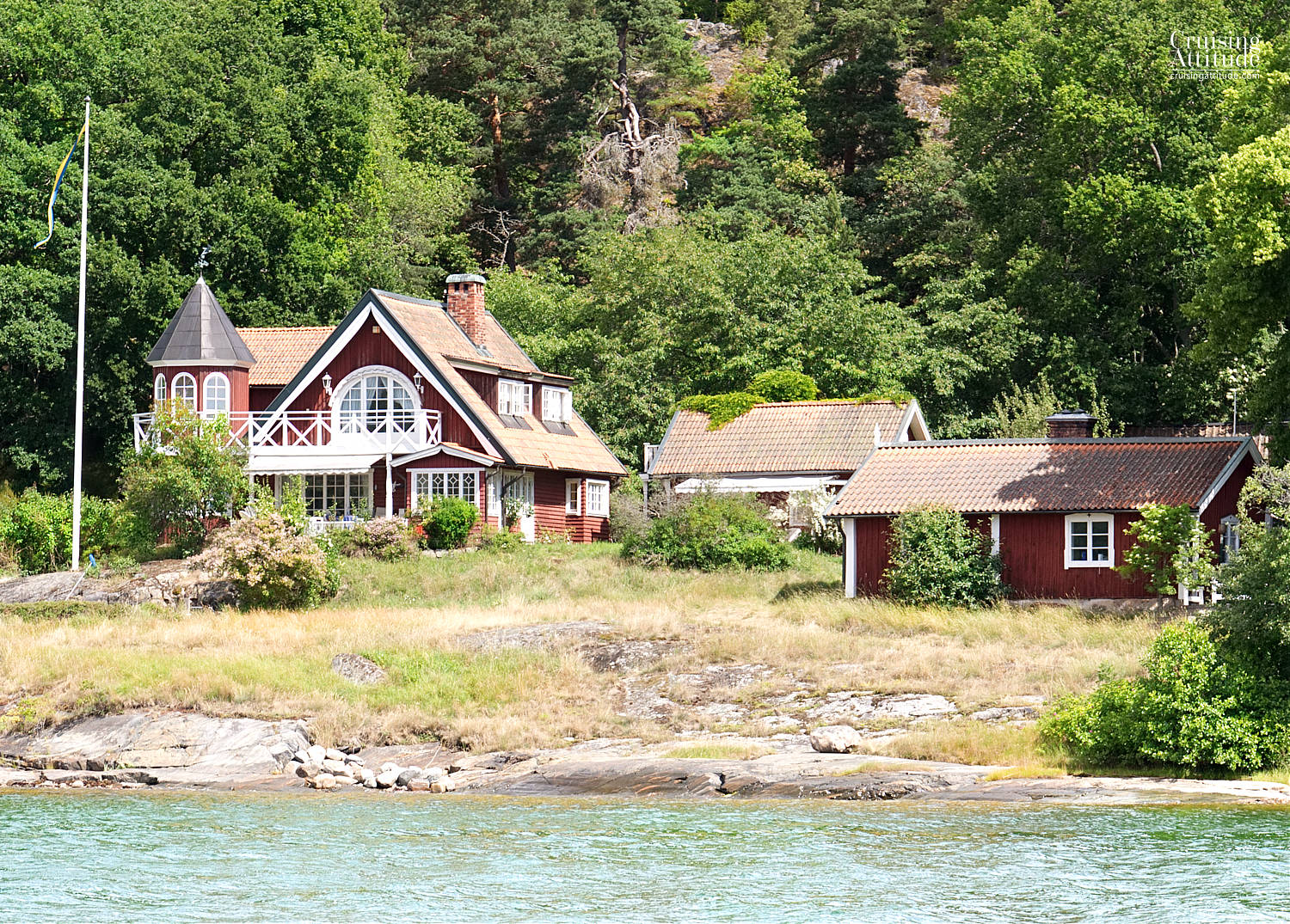 You do need to keep a lookout on the bow for traffic coming towards you. A few passenger boats in regular traffic come through and they have the right of way.  If you see or hear them coming (they will sound their horn before entering – one long blast), you’ll need to either back up or move to the side so they have enough room to pass.  There are several areas too narrow for the two of you to pass side by side, so stay vigilant. 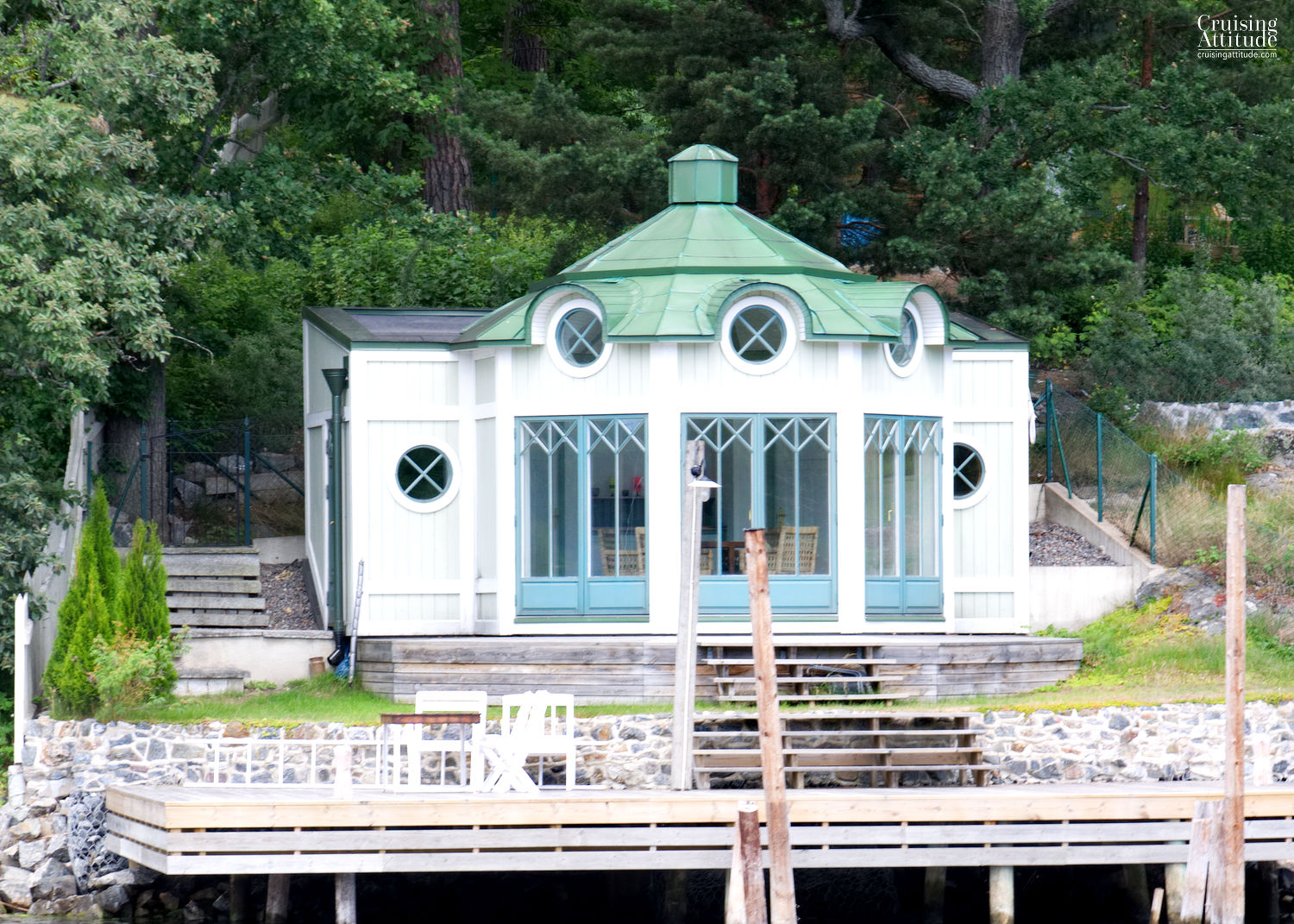 Lovely old pavilion along the Baggensstäket

If you have a motor, you are required to use it — sailboats are not allowed to sail through the canal.  Stay on the starboard side of the canal while being careful of the marker buoys.  This may sound like obvious information, but one of our guests assumed that you should stay in the middle of a fairway or canal, and we had to correct him.

Sometimes you won’t come upon a passenger boat, but something unusual, like a barge or small cargo ship.  We were behind a barge called Tvättbjörn on one of our passages towards the canal. The skipper had announced his ETA to the east entrance of the canal on VHF every 5 minutes.  A barge, being constrained in it’s ability to manoeuvre, has the right of way.

Have a look at the video!

After passing through the Baggenstäket, you’ll go through the strait of Lännersta, and then through the scenic Skurusundet (Skuru strait).  Again, the bridge has a 30-meter clearance, but that’s in the middle part of the structure. 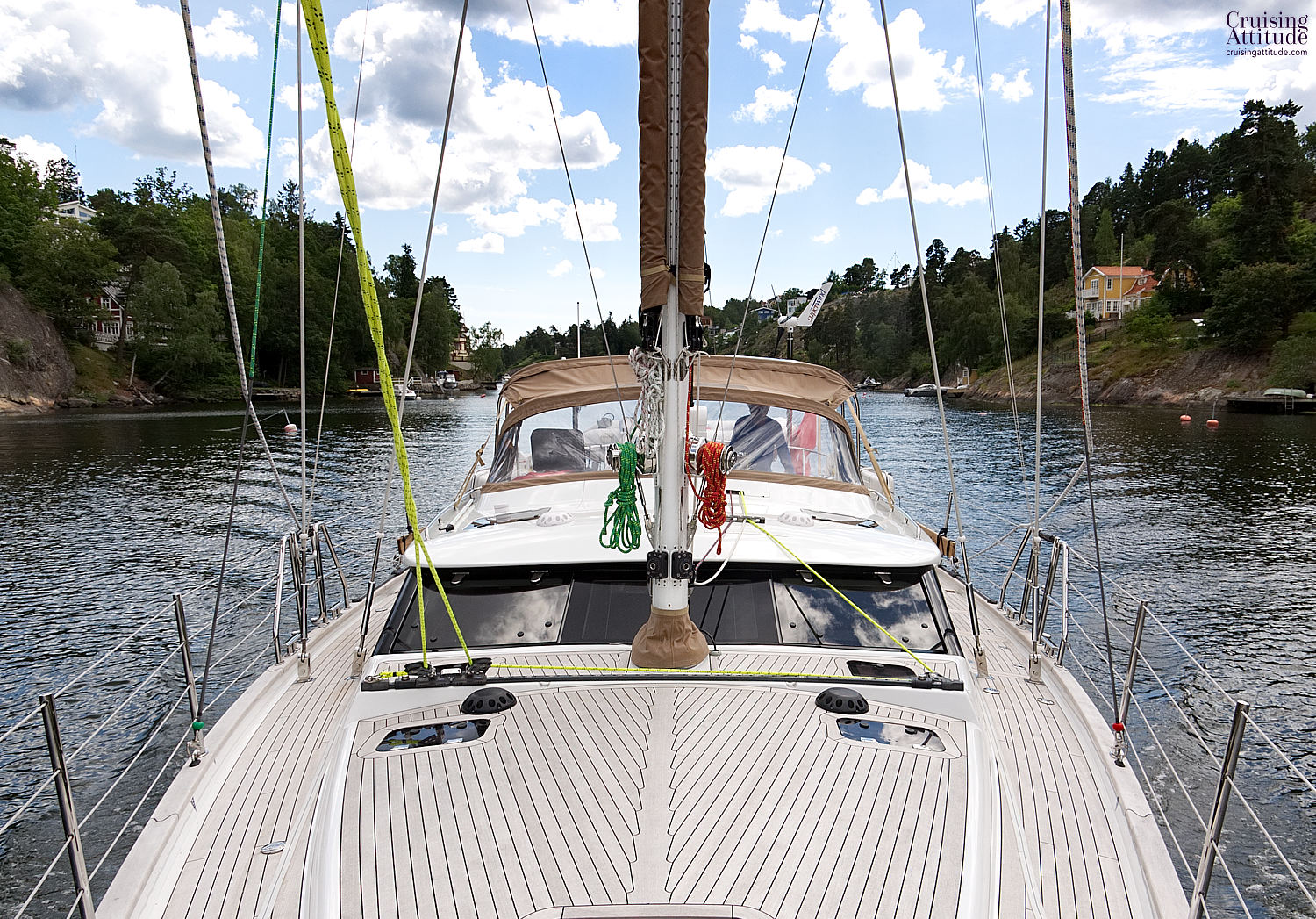 The Skurusundet, just outside Stockholm 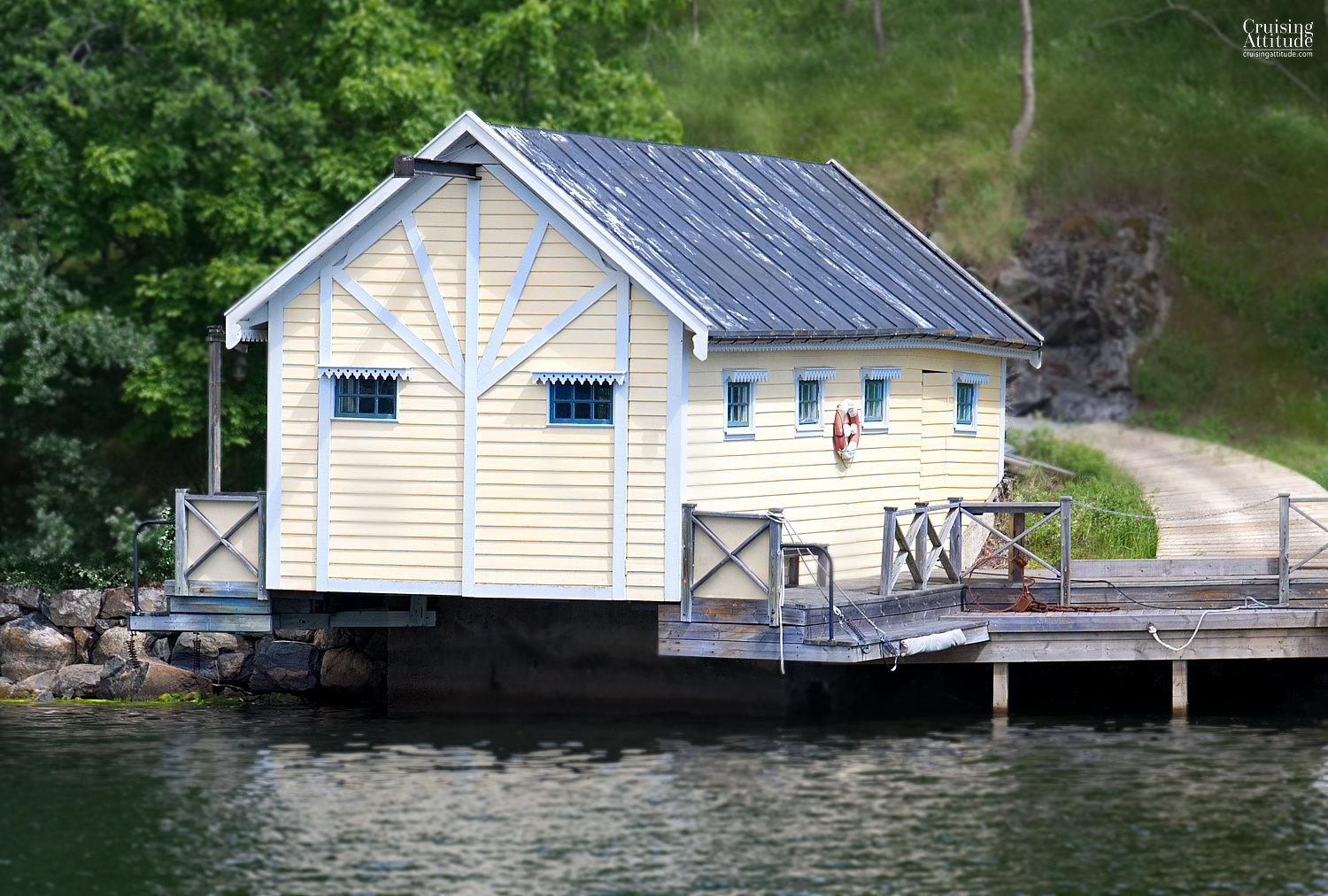 Boathouse along the canal

Upon exiting the Skurusundet, you’ll sail past the little island called Sverigesholme and “turn left” towards Stockholm.  You’ll now see Stockholm in the distance ahead.  After passing the large island of Lidingö (where I lived for several years), you’ll see the Fjäderholmarna (Feather Islands) on your starboard side.  The main island hosts a couple of good restaurants. You can even visit them with your own boat if you can snag one of the few berths on the island.  Otherwise, you can catch one of  the shuttle boats that go out every 30 minutes or so from the centre of town. 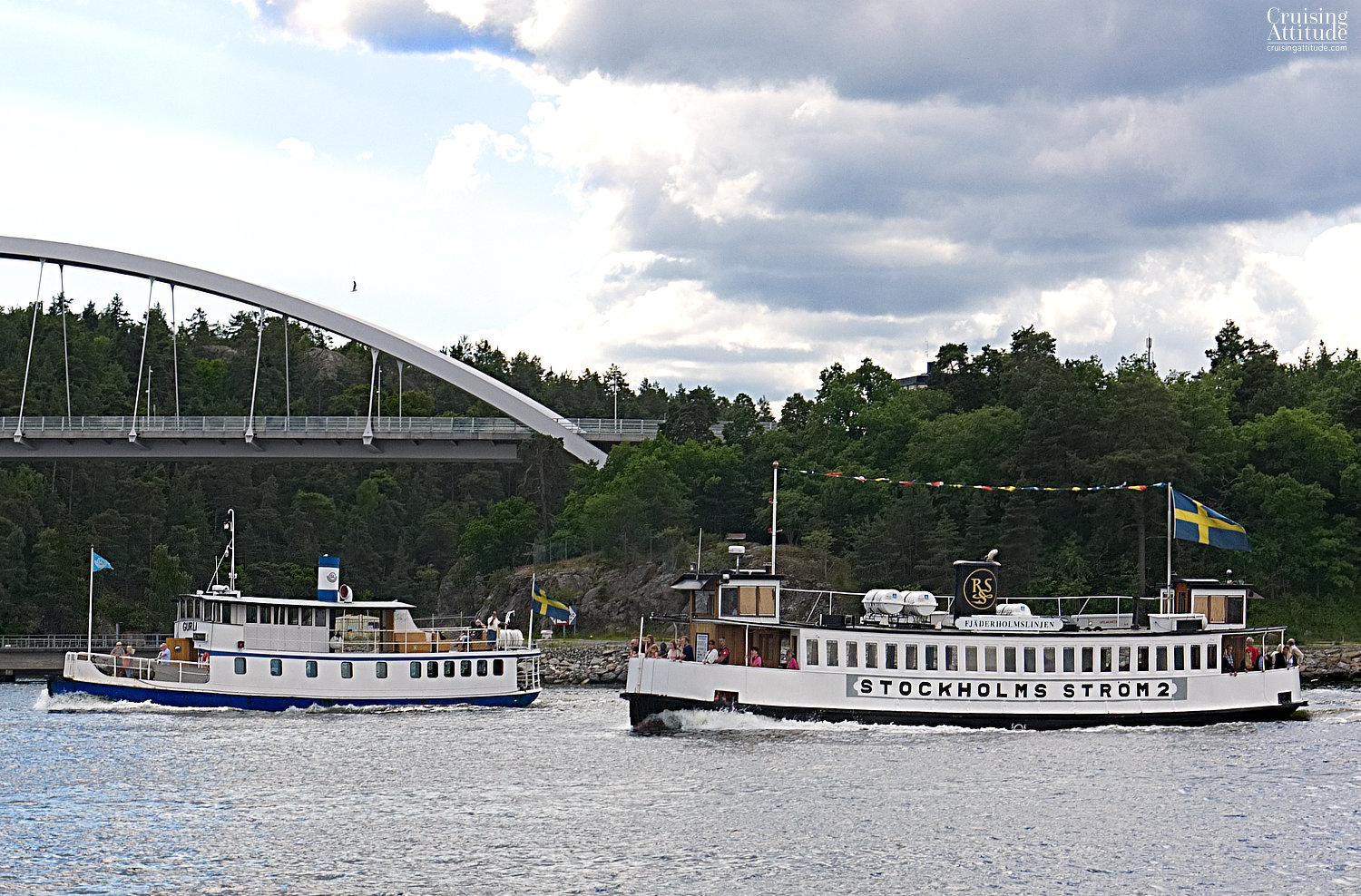 Some of the many archipelago passenger boats that run out of Stockholm. One of them is a shuttle that goes to the Fjäderholmarna.

Just after the Fjäderholmarna, you’ll have the island of Djurgården on your starboard side.  The two marinas in Stockholm are located here.  One is called the Wasahamn and the other is called the Navishamn. 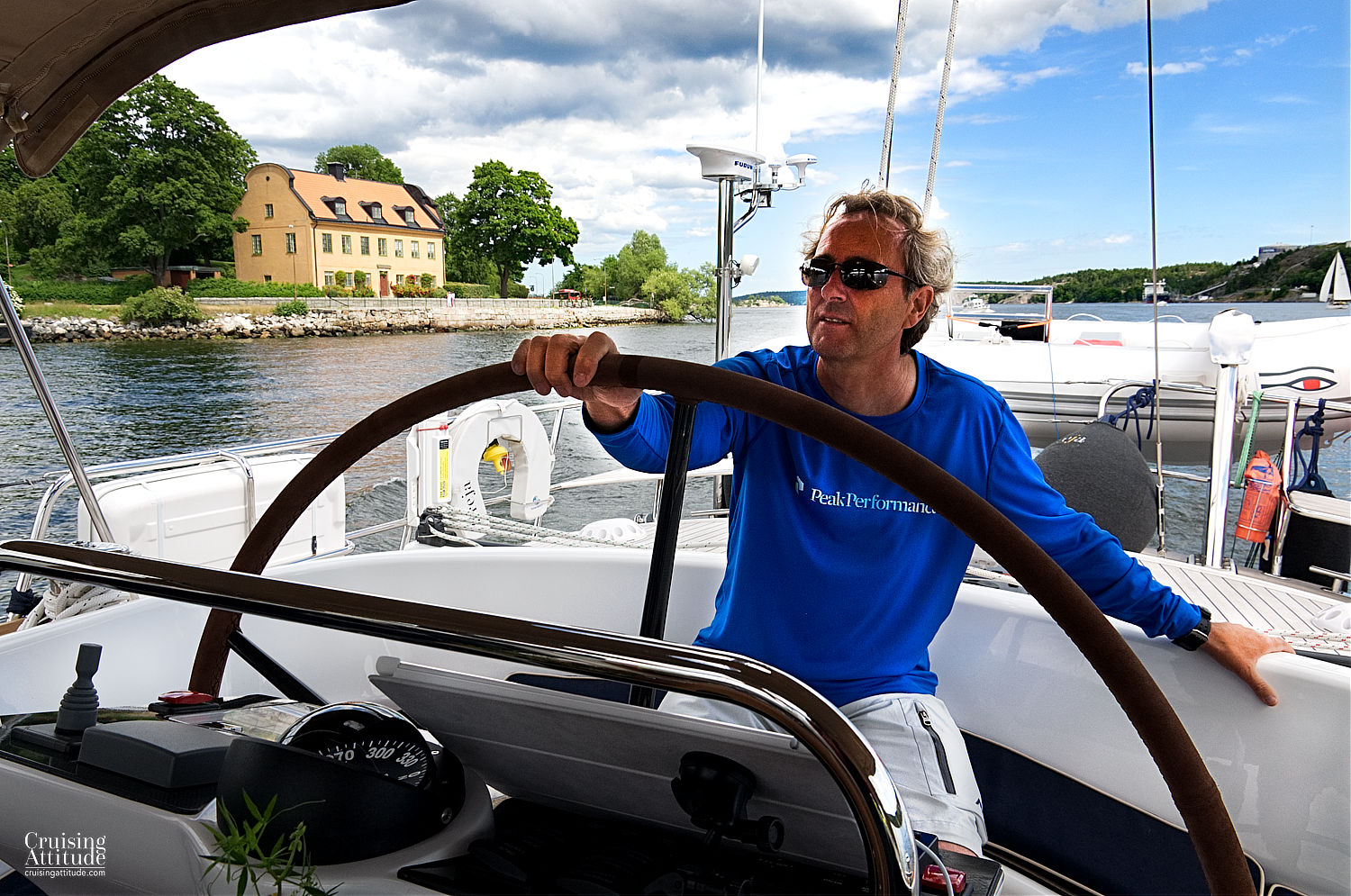 Sailing past the western end of Djurgården island in Stockholm

The advantage of the Wasahamn is that it’s closer to town and a stone’s through from several of the major tourist attractions of Stockholm, restaurants, cafés, etc.  The advantage of the Navishamn is that it it’s farther from the centre of town, in a somewhat peaceful area.  So you have to decide what you appreciate more — a bit of tranquility in the city, or easy access to to most of the famous tourist attractions in Stockholm.

I’ll do a marina review and go through some of the famous tourist attractions in Stockholm in my next posts.

We decided that the Navishamn would suit us better, since a). we’ve already seen the tourist attractions on Djurgården, and b.) we prefer some tranquility! 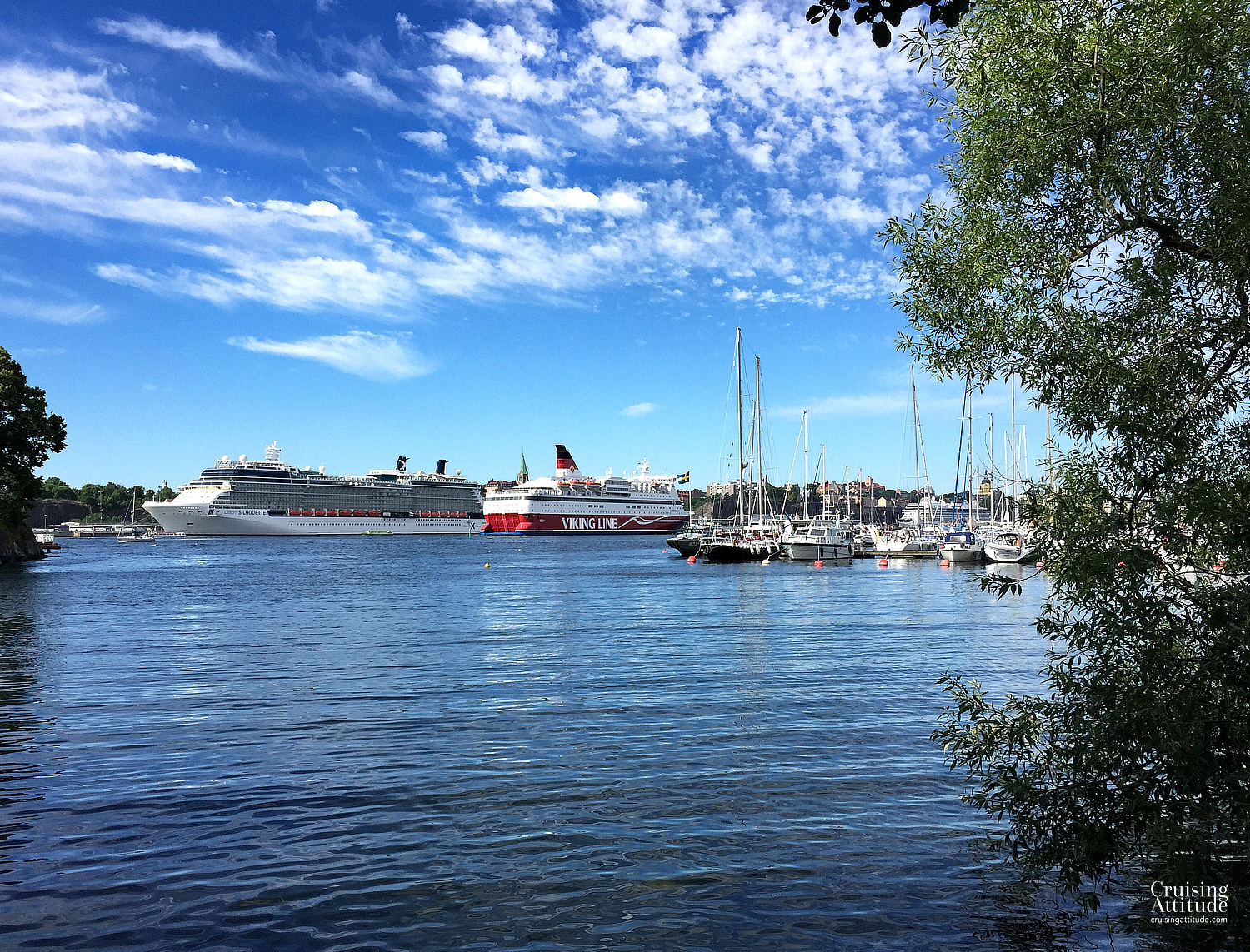 View of the Navishamn in Stockholm