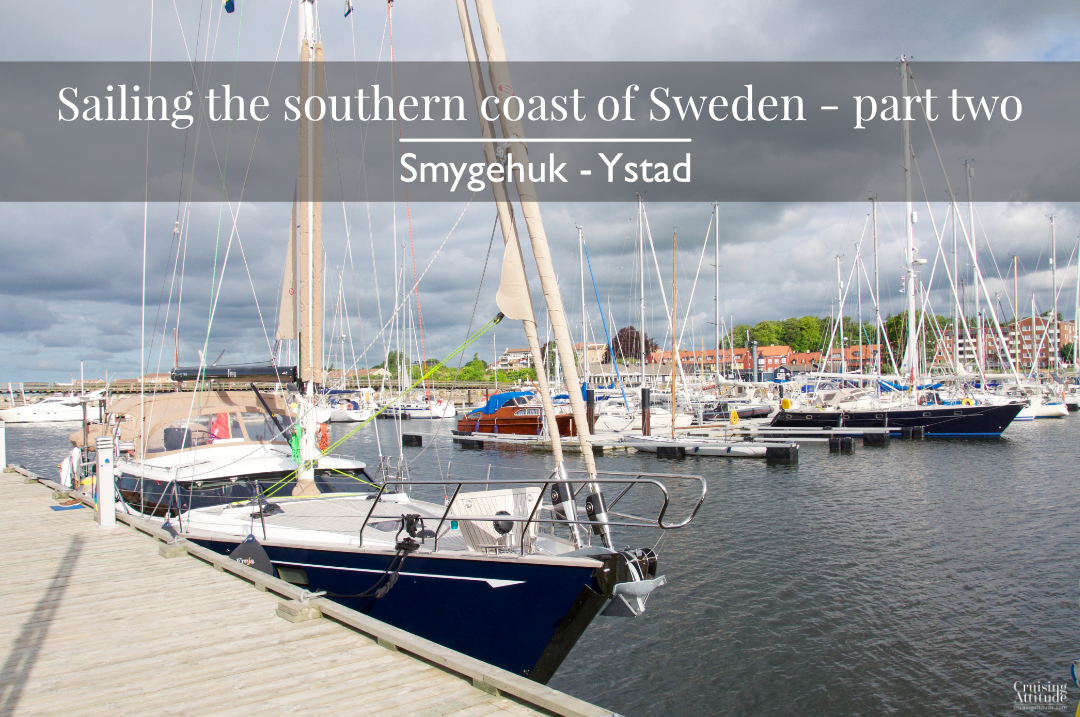 After passing through the 1600 meters of the Falsterbo Canal, you are officially on the south coast of Sweden (still part of the Skåne region).  We had to dodge the ferries coming in and out of Trelleborg.  Four difference ferry services connect Trelleborg to Europe: Travemünde, Rostock and Sassnitz in Germany, and one to Swinousjscie in Poland.  Quite a few boats to dodge!

We decided to stay at the idyllic marina at Smygehuk instead of continuing on to Ystad and arriving late.  We were thankful we did!  It really is charming. 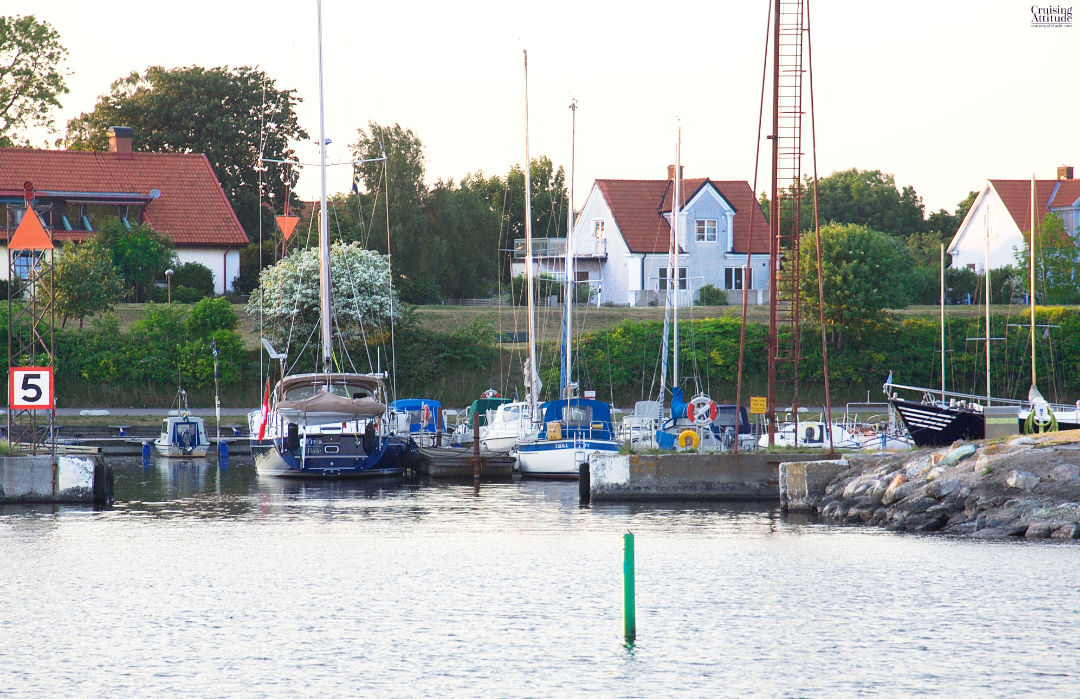 The tiny marina of Smygehamn in Smygehuk

The tiny marina of Smygehamn had exactly two spaces for boats as long as Freja. One was already taken by a large motor yacht from Holland that we’d already seen in Klinteholm Marina in Denmark. The only thing to do was to think “thank you!” and take the one berth that was left.  We were so happy we ordered the shoal keel for Freja. The depth in the marina was just 2 meters, leaving us with a scant 20 centimetre margin.  We noticed lots of people watching us as we approached and moored up.  We were certain they were thinking “they are going to go aground, those idiots!” 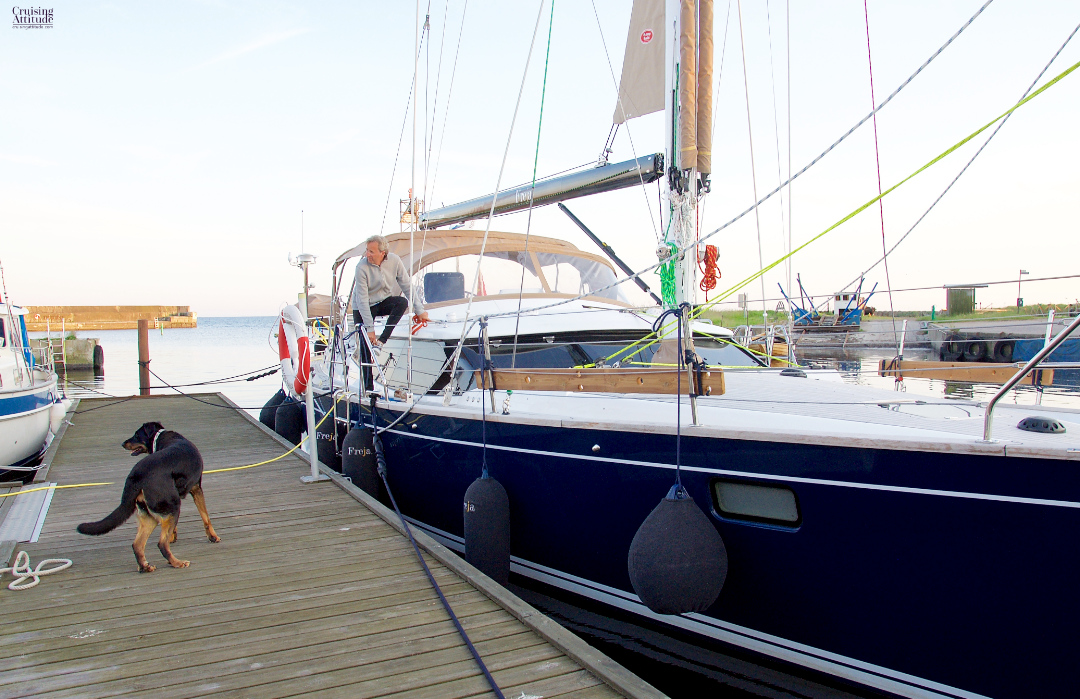 Senna waiting to go for her after-arrival walk 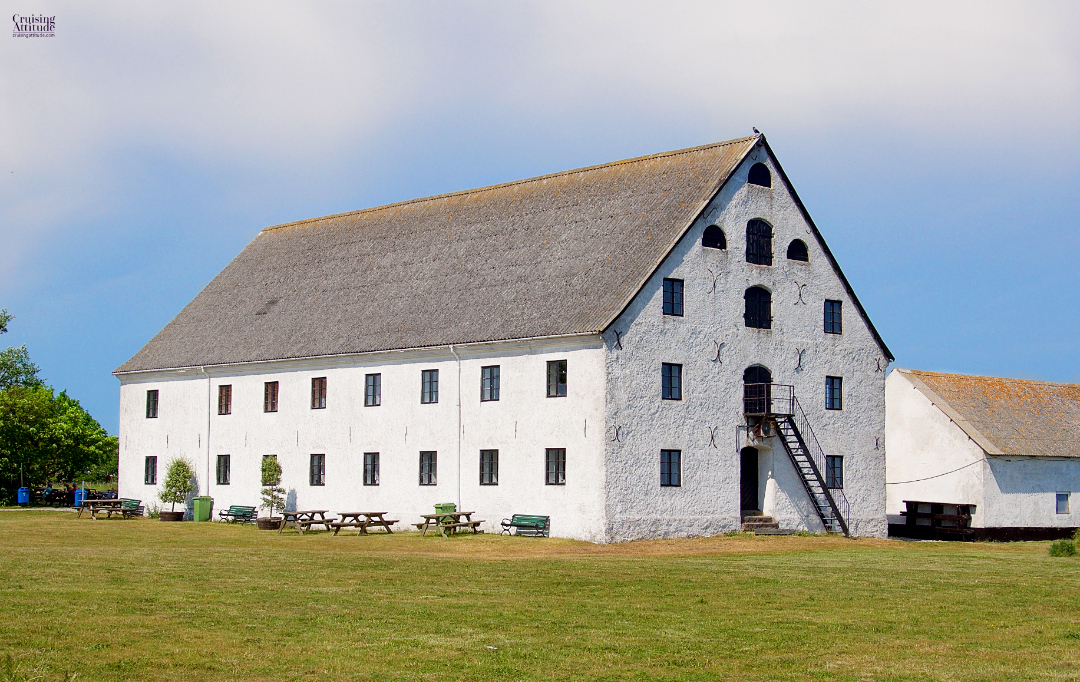 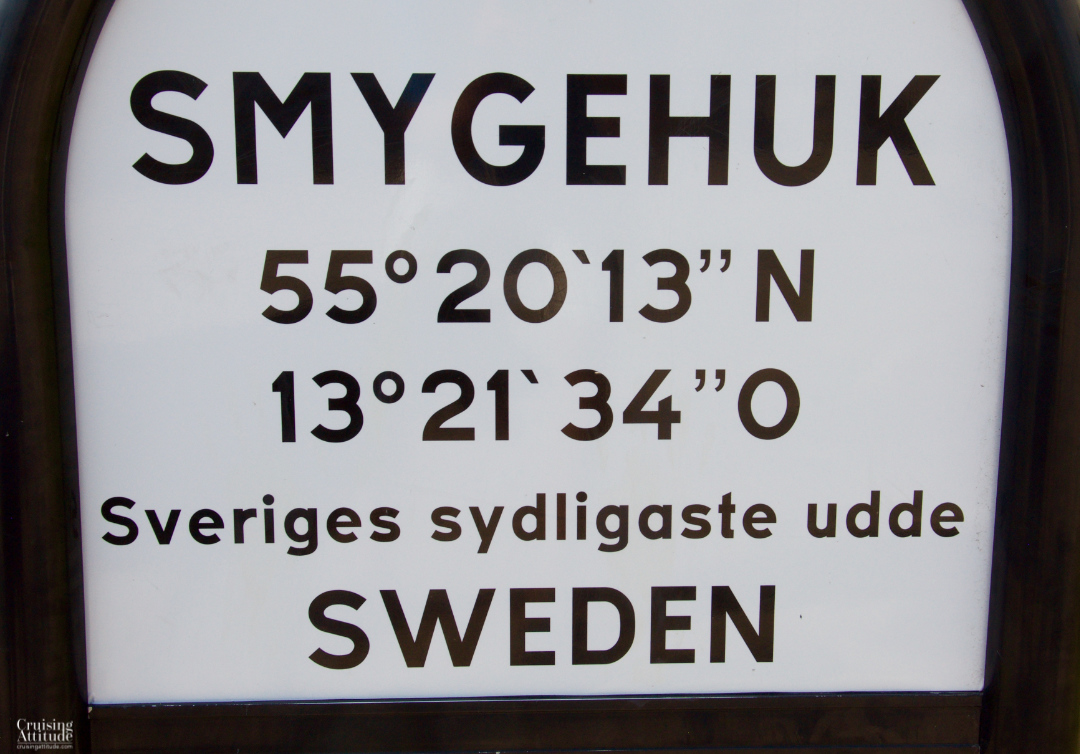 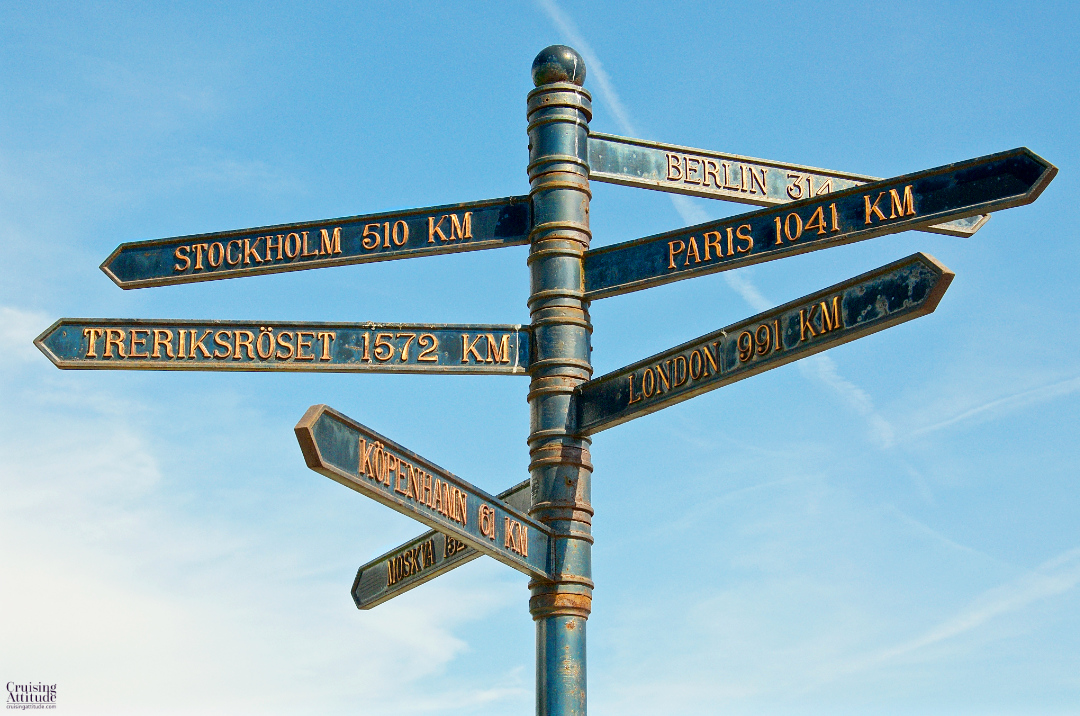 Distances to various capitals as well as to Treriksröset (the point where Sweden, Norway and Finland meet in the north). 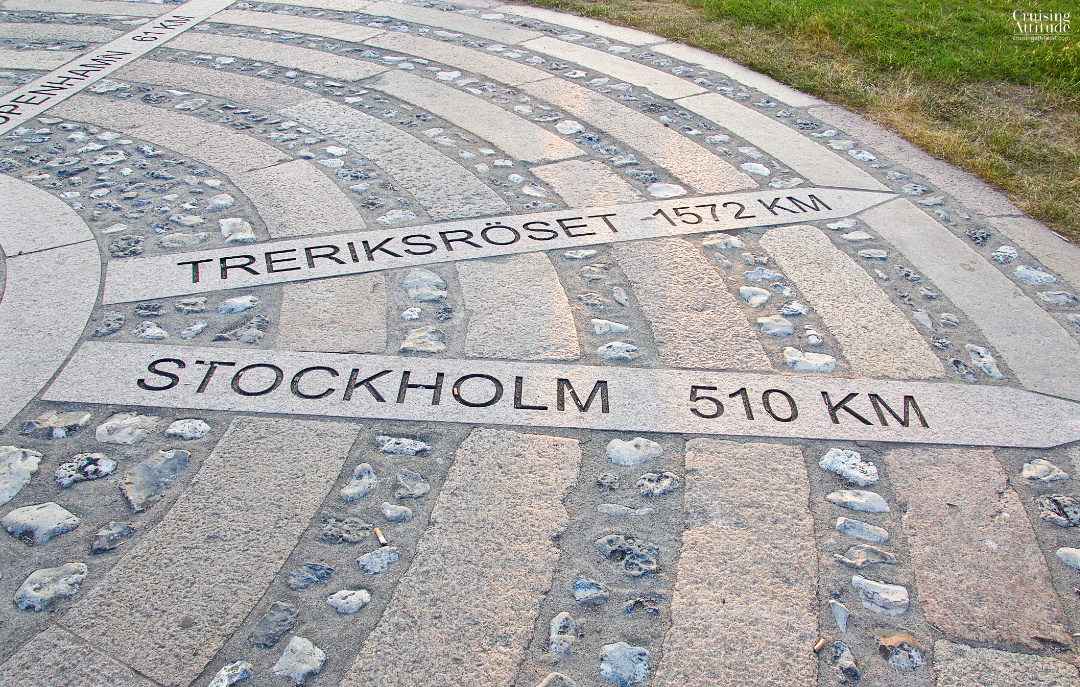 This “compass” was constructed at the southernmost tip of Smygehuk, on an overlook in front of the sea

Ystad – a town made famous by crime novels

Ystad is not far from Smygehuk and we decided to stop there to visit the city.  You need to arrive early if your boat is 43 feet or more in length. Ystad marina just doesn’t have many berths for boat this size.  We arrived just before 14.00 and were relegated to a berth in the southwestern part, near the rescue vessels.  The advantage of this part of the marina is that the evening sun lasts the longest . The disadvantage is that the marina office is a long walk from here — we guessed about 500 meters. 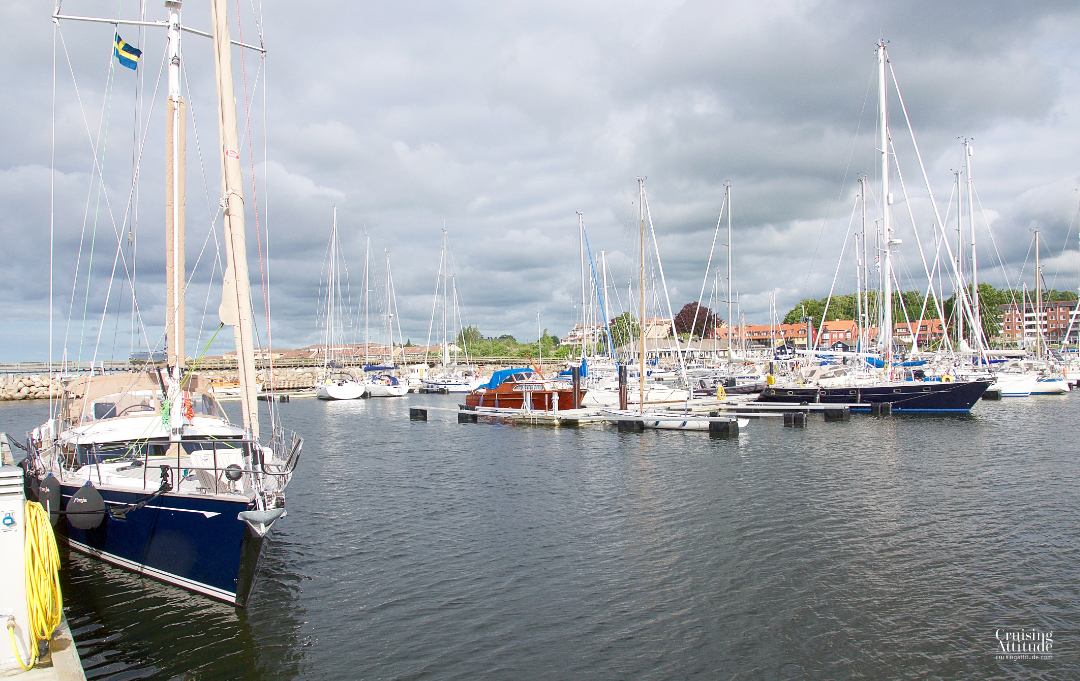 Ystad is an old town, founded as a fishing settlement in the 11th century, and some of the architecture dates from the middle ages.  The area between the marina and the town centre is filled with colourful one and two-storey row houses that date from the 1700’s.  Closer to the centre of town, you’ll find the red brick buildings that date back to when Ystad was part of the Hanseatic League (14th century) as well as the half-timber architecture from the 15th and 16th centuries. 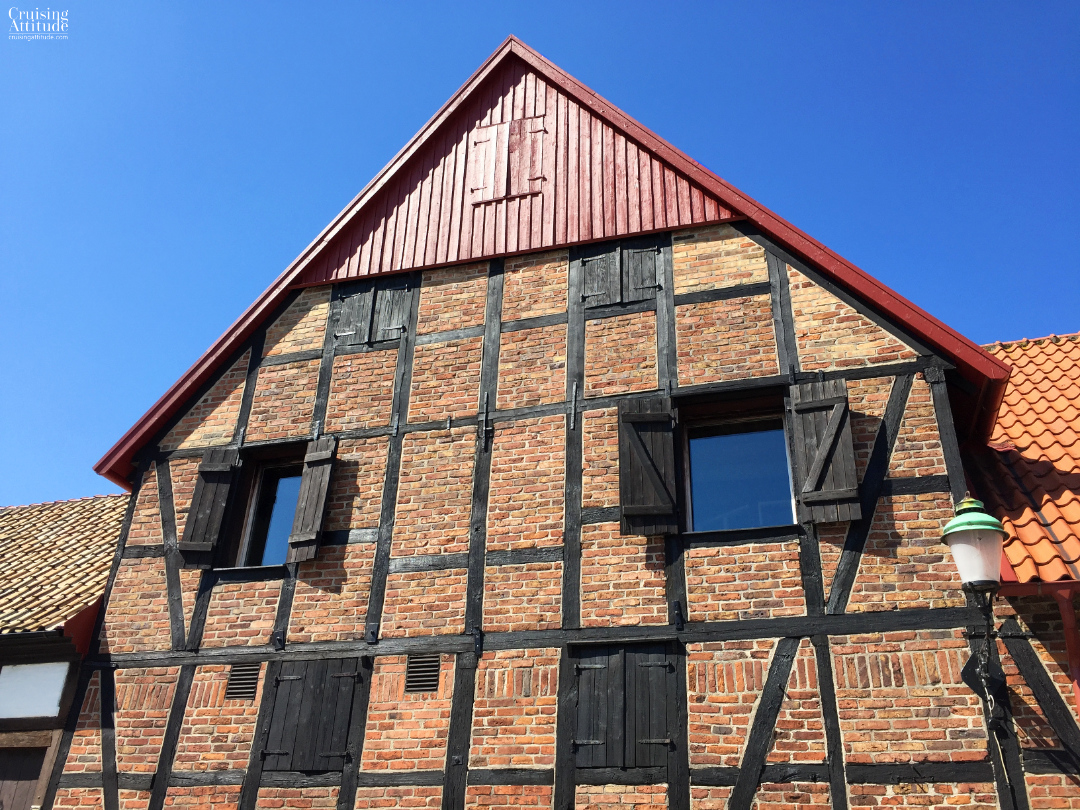 One of many red brick and timber-framed buildings in Ystad 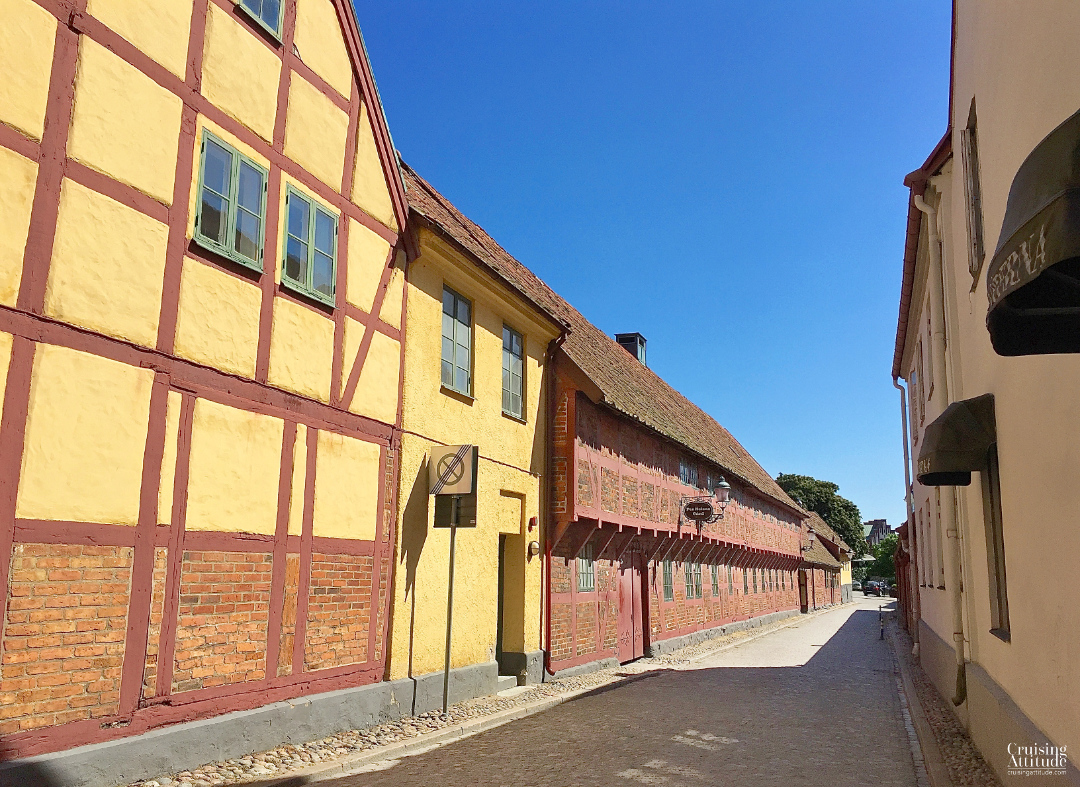 A few more timber-framed buildings. These date back to the 15th and 16th centuries 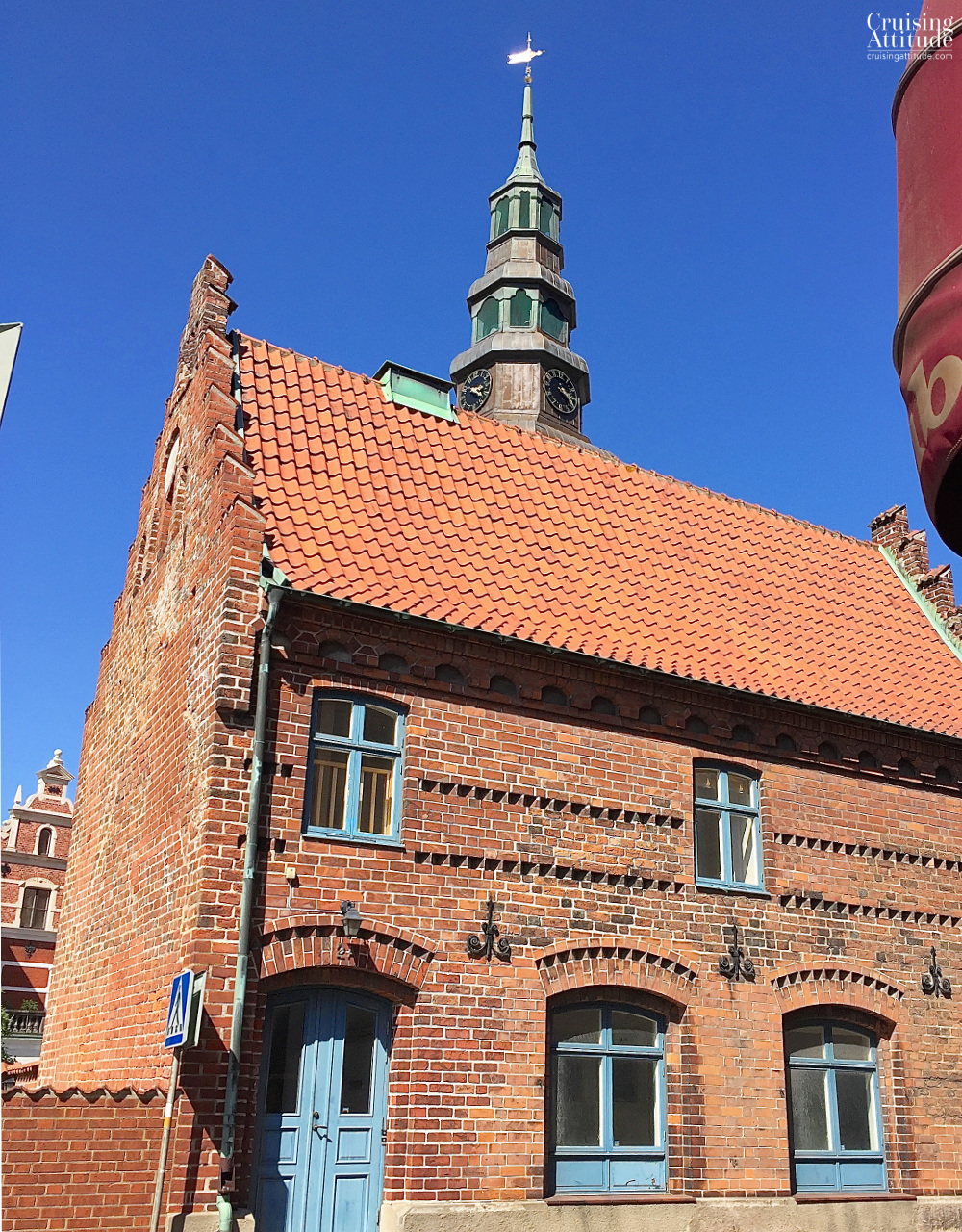 Ystad and its surrounding area has been made famous by the Wallander crime novels written by Henning Mankel.  You may have read the books or seen the movies and TV series. I’ve read all the books and have seen the TV series in both Swedish and English. So yes, I’m a big fan of the books!  If you’re a fan as well, you can visit the often-named places such as the Hotel Continental. This is where the fictional Kurt Wallander would often have dinner or a drink, and where he once forgot his service weapon. 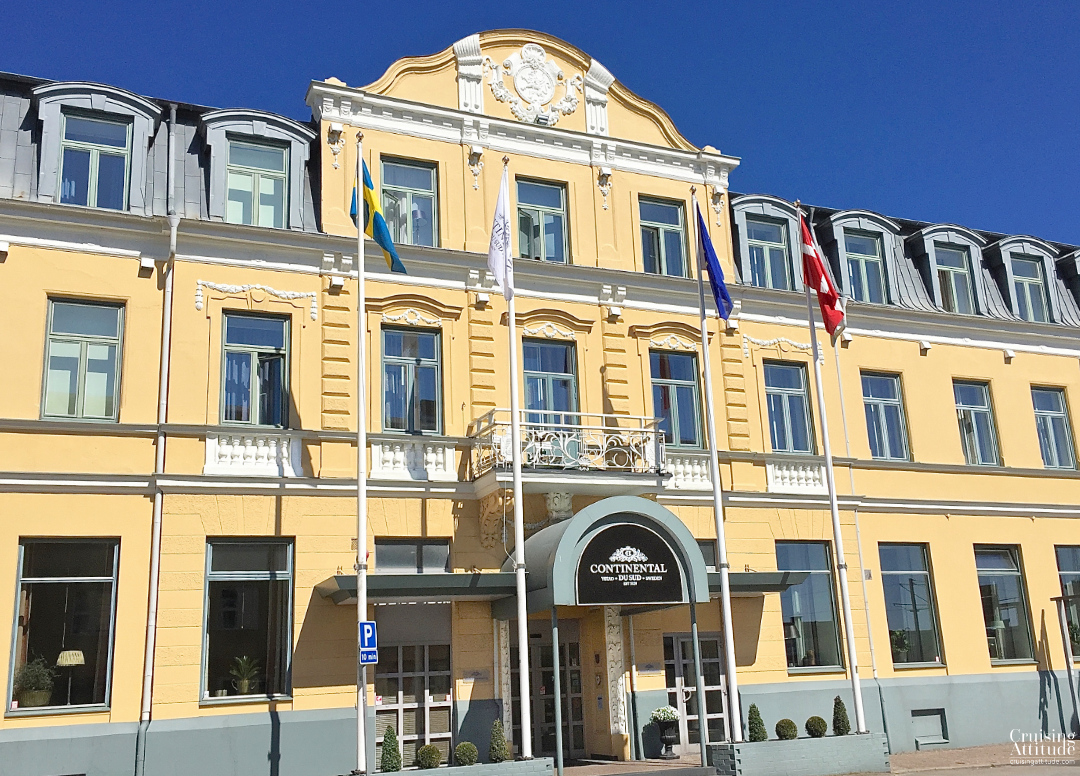 The Hotel Continental, made famous by the Wallander crime novels

The centre of town is host to lots of shops, cafés and restaurants and we took advantage of this to buy some tea, artisanal honey and other gourmet items at the Gourmet Hörnan. Saturday is the busiest day of the week in Ystad as the marketplace is full of stands selling everything from vegetables to coffee to arts and crafts.

If you’re a fan of seafood, there’s a shop and café just a few steps from the marina office.  We bought enough fish to last almost the next week and then sat down at the café to have a seafood lunch with a great view of the beach next to the marina. 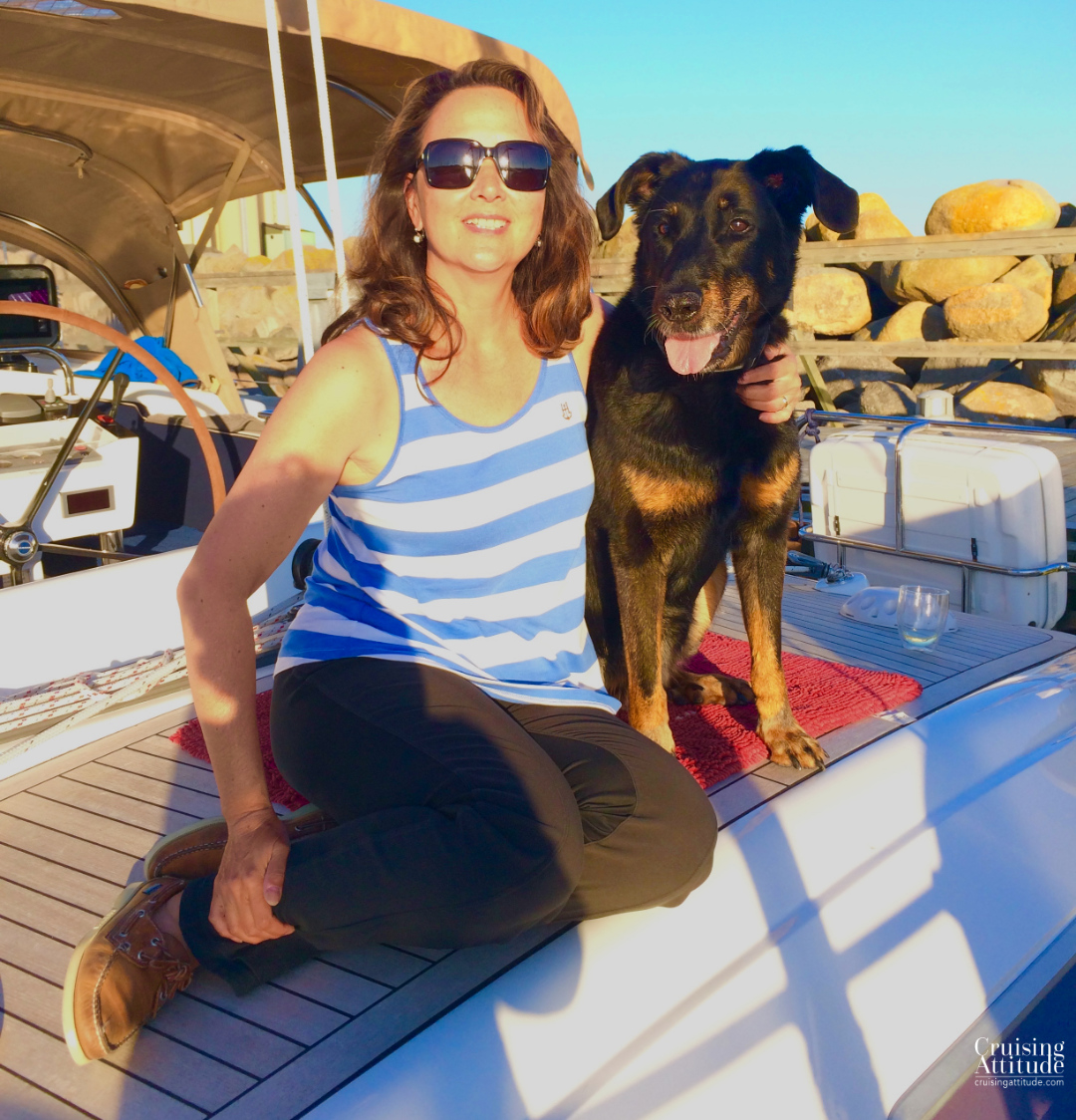 Enjoying a warm June evening on the stern deck

Electricity is accessed with a Tally Key (smart card that you can fill with cash).  Any cash left on the card will be refunded at the marina office when you give back the card.

You’ll find three restaurants right next to the marina.  We had lunch and bought some seafood at the restaurant nearest the beach.  If you want to have a more “gourmet-style” dinner,  try the restaurant at the Ystads Saltsjöbad. We ate a fabulous dinner there.  If the weather is cooperative, you can sit outside on the terrace and have a great view of the beach.  If you have a bicycle, it’s only about a 10-minute bike ride up the coast (west of Ystad Marina). 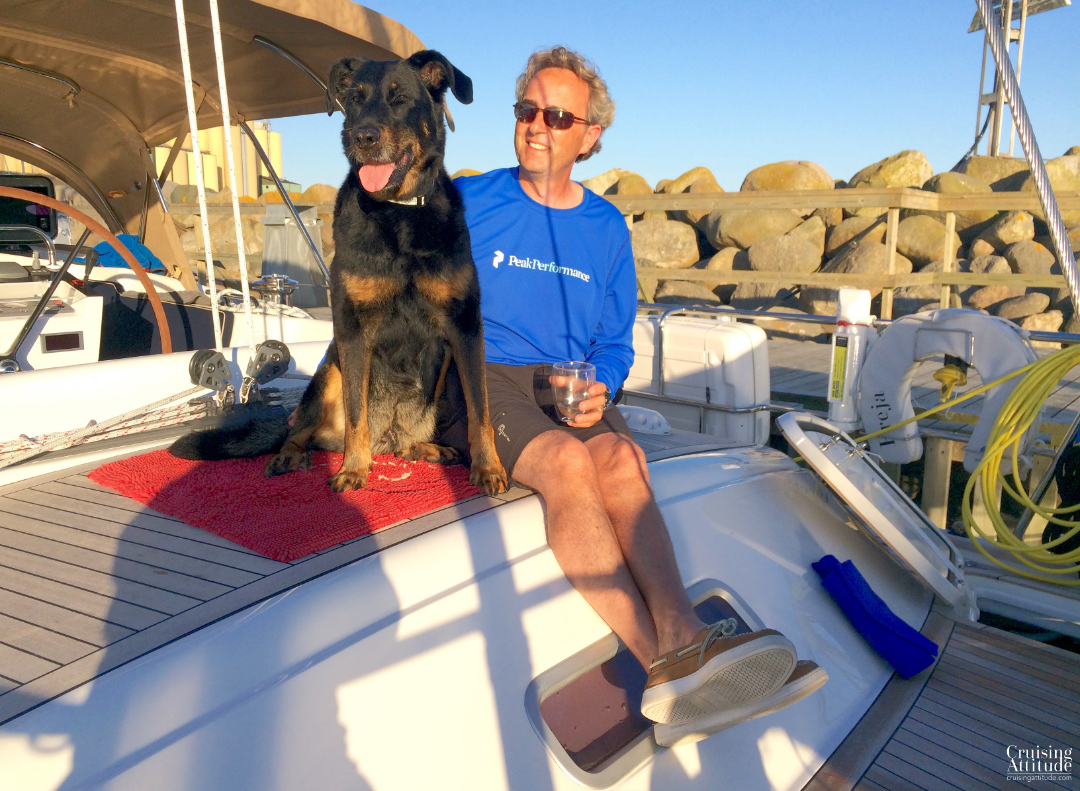