Sailing the south coast of Sweden, part 3: Ystad to Skönviken

We got off to an early start — 8.15- – from Ystad. Our goal was to arrive at Simrishamn, another marina that doesn’t have many places for larger boats.  We wanted to arrive by 15.00 at the very latest. Fortunately, we had wind blowing from the right direction at between 12-16 knots. Enough to cross the 33 nautical miles before the crowds arrived.

The marina in Simrishamn is a bit unusual in that you need to read the signs indicating  the depth in each part of the marina.  Closest to land it’s 1 meter, then  a sign states 1,6 meters, then 2 meters, etc.  If you just go for a vacant berth without reading the signs, you could go aground. 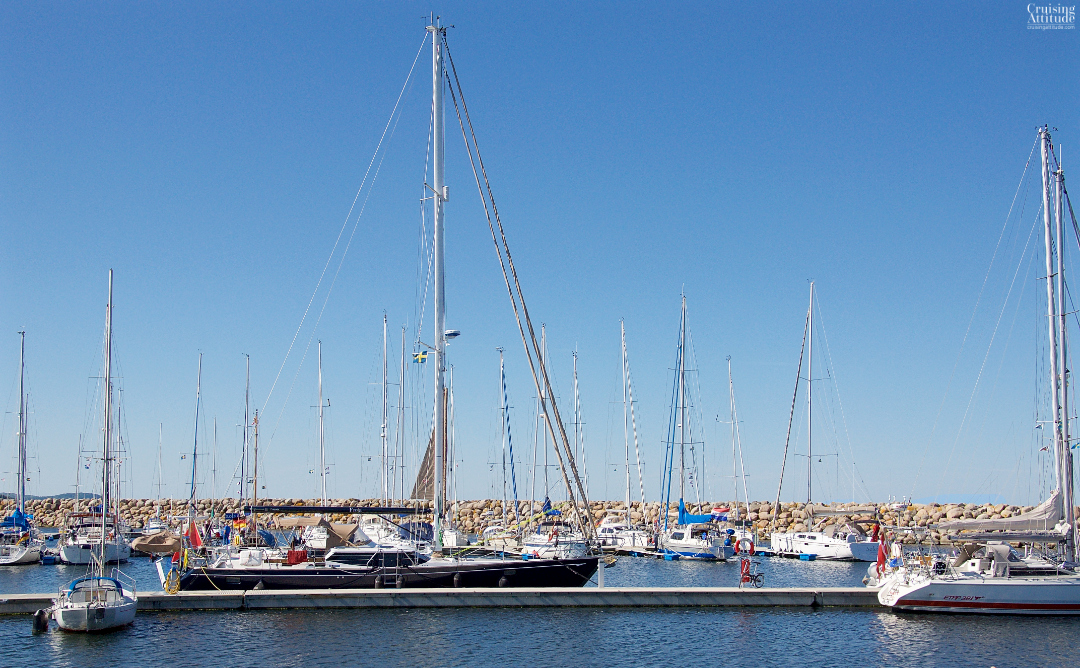 The side of the pontoon with the white Danish boat is marked as having a depth of 1.6 meters along its entirety. Where we are, it’s 2 meters and at the end, it’s 2.5 meters

Luckily, we arrived just after 15.00.  The crowds (mostly German and Danish boats) began coming in at 16.00.  You may be thinking, “why all the worry about getting a berth – why don’t you just raft up to another boat”.  Well, its mostly because of the dog.  We don’t think our old dog would be able to jump onto another boat, since most boats either don’t have a mid-ship gate or would leave it up (this is happened to us).  You also can’t be sure that the boat being rafted is dog-friendly.  They could be allergic — or have a cat onboard! The final reason is that the average size boat in Scandinavia is perhaps 40 feet and weighs 10 tonnes.  Freja weighs 27 tonnes fully tanked, so her size and the displacement scare most other boat owners – and they’ve flat out said no, you can’t reef up to us.  The only boat that ever said “OK, but we need to leave early tomorrow morning” was a Westerly 49 when we were in the Bristol Marina.

Simrishamn is a colourful, picturesque coastal town that becomes a popular summer resort town in the summer.  The beautiful white sand beaches in the area between Ystad and Kivik, just north of Simrishamn, attract thousands on tourist each year. This area is called Österlen. 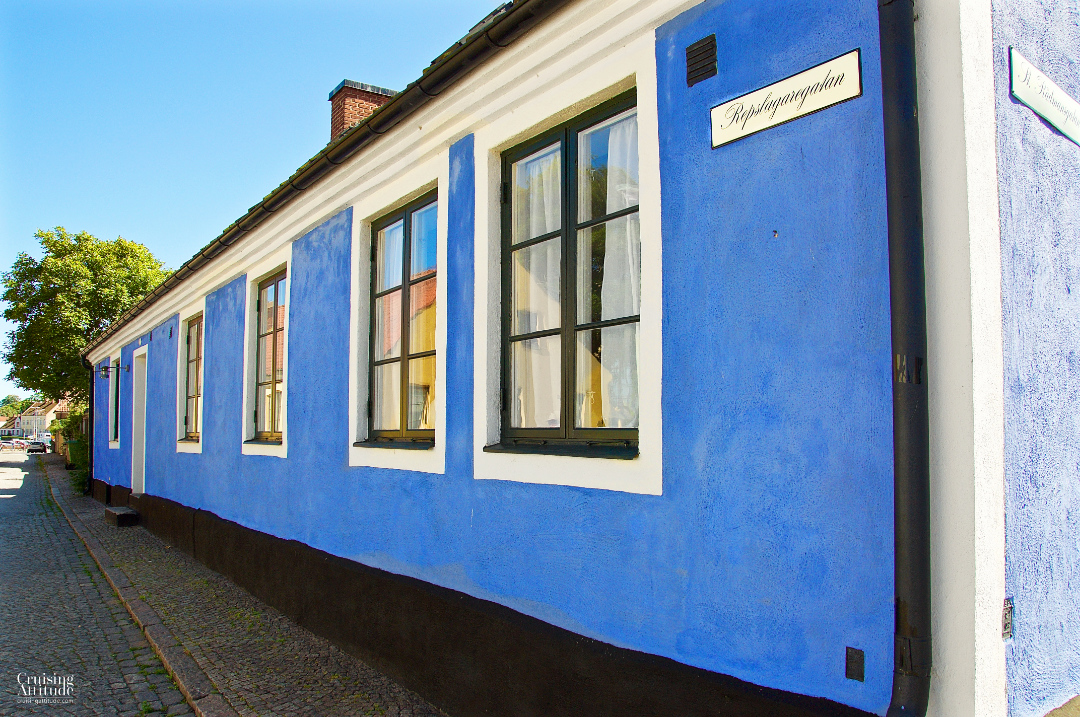 One of the colourful townhouses in Simrishamn

The centre of town begins at the fishing harbour. From there you’ll find a pedestrian street lined with shops and restaurants.  The areas on either side of the pedestrian street are residential and you’ll find colourful one and two-storey townhouses and cobblestone streets. It’s worth a walk with your camera. 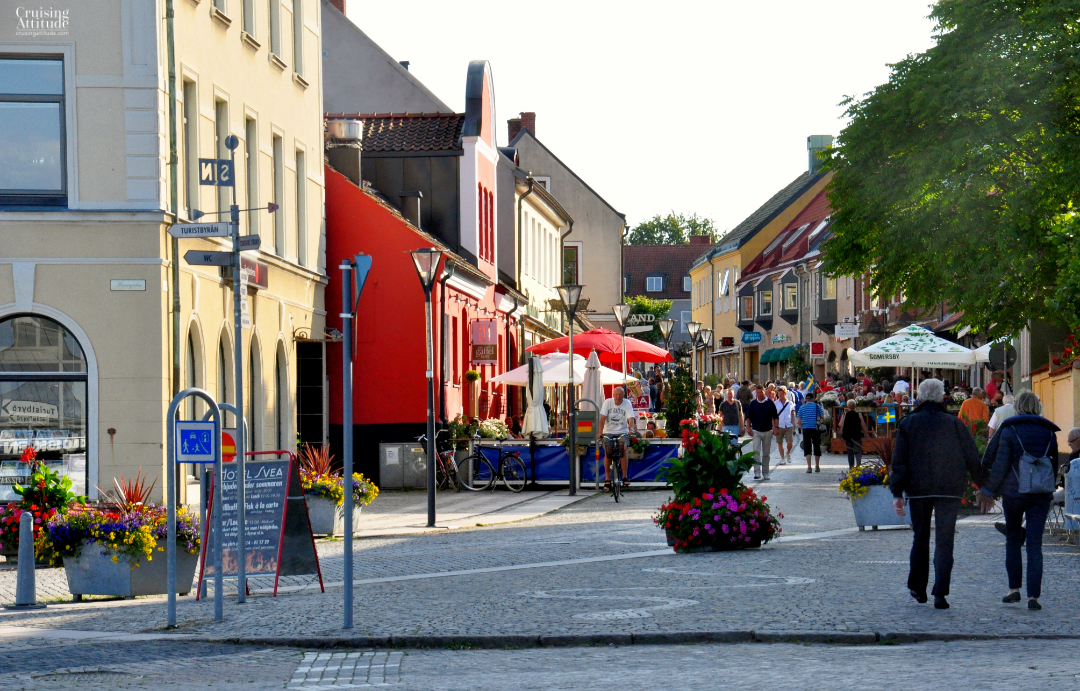 The pedestrian street begins at the fishing harbour 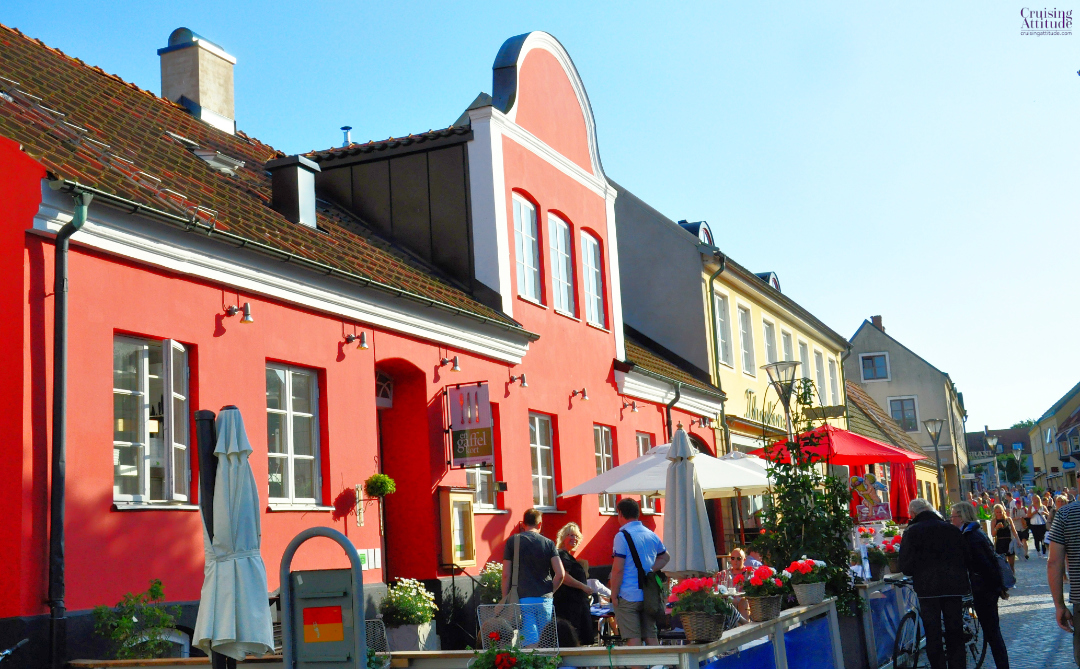 The pedestrian street is lined with restaurants, cafés and ice cream shops. 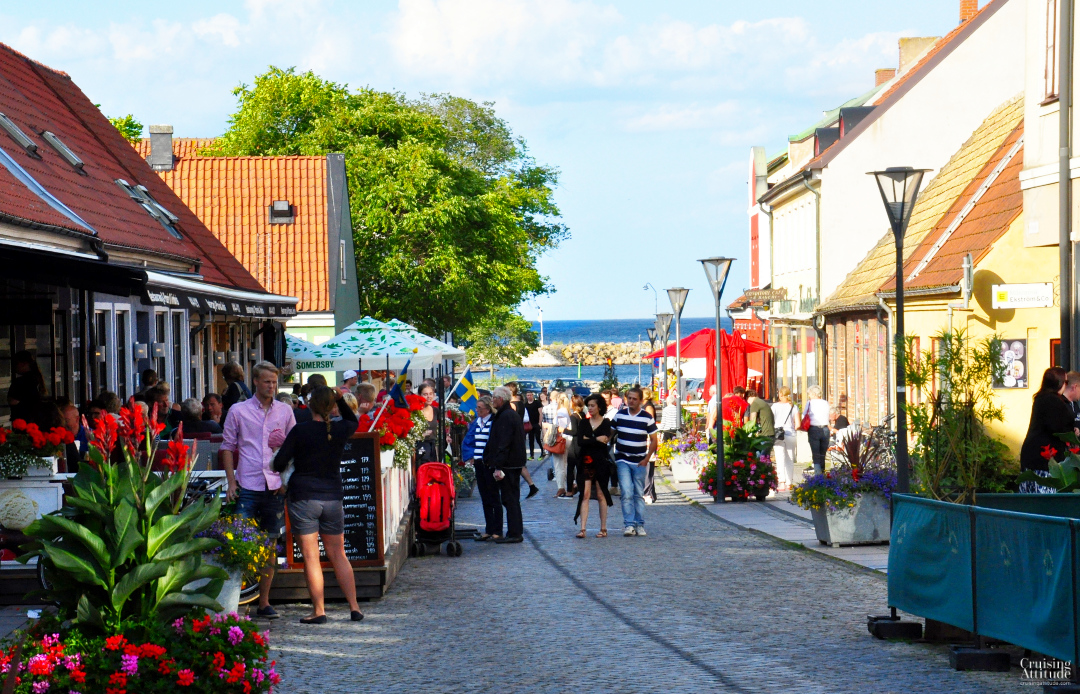 Unfortunately, we arrived too late to get a table. Everyone was out and about on this warm June evening. 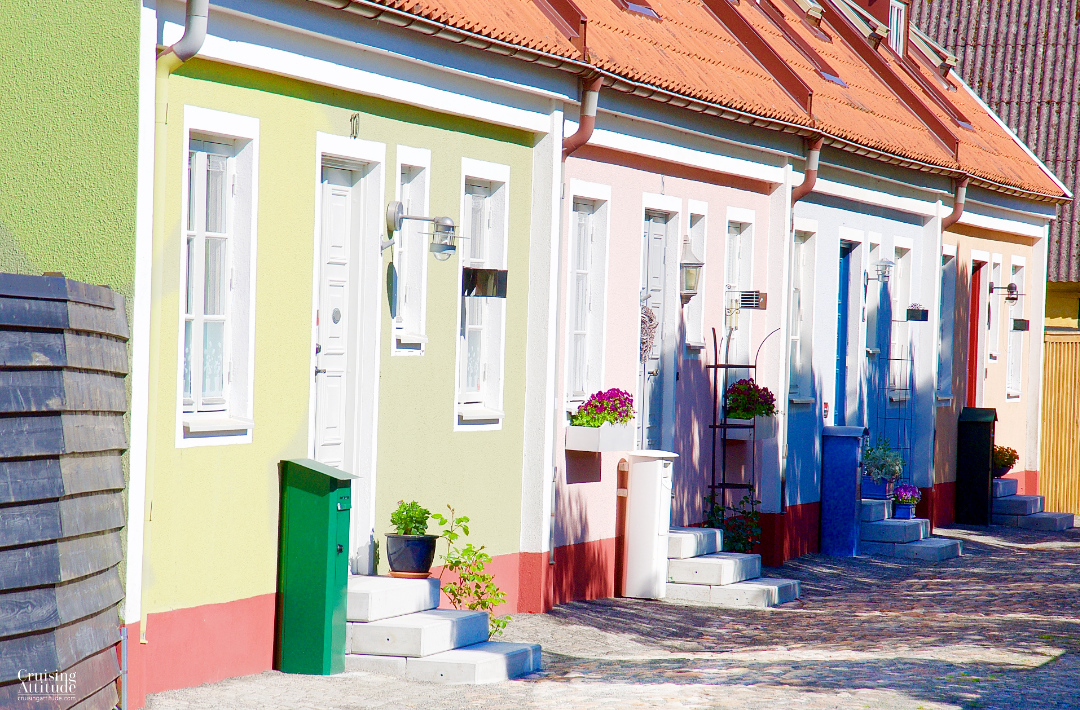 The complementary pastel colours on these townhouses are lovely 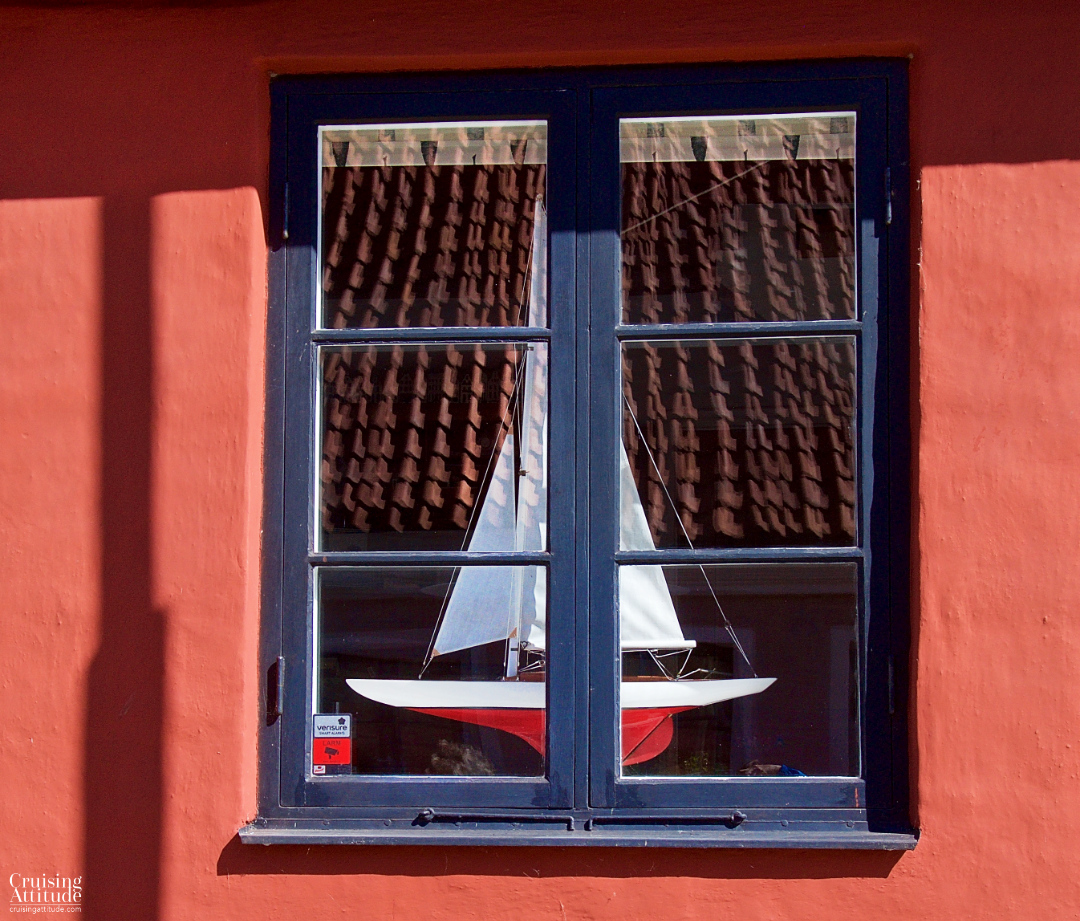 A look into one of the townhouse windows

Marina prices (2016): 200 SEK during high season (June, July, August) and 135 SEK during low season. You pay the marina fee at the automat (takes credit cards only). You can also buy a Tallycard smart card for electricity here and “fill it up” .  Money on the card that isn’t used will be refunded when you return the card to the machine.  It will just swallow the card and give you your cash!

Most sailors who spend the night in Simrishamn will make the traverse over the Bay of Hanö to Utklippan.  That’s because they’re in a hurry to work their way up to the east coast archipelago which begins just before the town of Oscarshamn.  Since we weren’t in a hurry we decided to sail north and explore the coast north of the bay.  Our first stop was the small marina at Hellevik.  We found this marina in the guide book “Hamn Guiden”, part of the Hamn/Havne Guiden series. 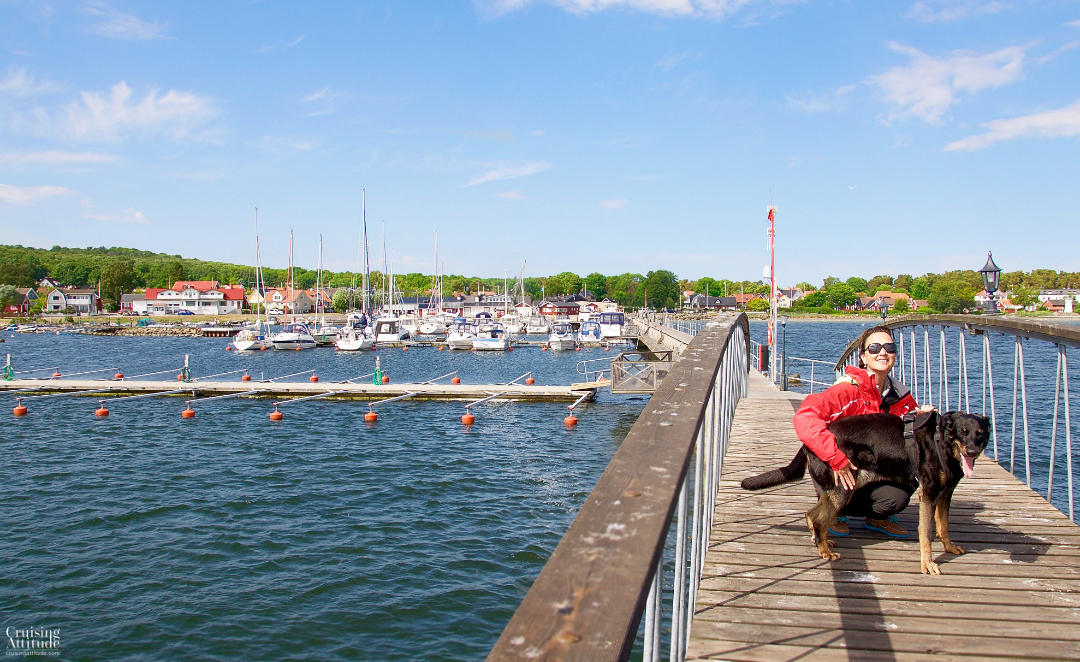 View of the marina in Hällevik

The village itself is so small that you don’t even realise there’s a village.  There’s the marina and fishing harbour, a few houses, a seafood shop, a restaurant and a combined supermarket-boat supply shop. That’s it!  But it was a very pleasant 33 mile sail and set us up to visit the small archipelago of Blekinge.

Blekinge is the area located north of the Hanö Bay. Its archipelago isn’t well-know to those who don’t live there. If you have the time, we encourage you to explore it — it’s lovely and not very crowded. We were really itching for a peaceful anchorage surrounded by forest. The last time were at anchor was south of Gothenburg on the west coast of Sweden.  We found it in a well-protected cove called Skönviken (“beautiful bay”) just west of Ronneby — and it is indeed beautiful. 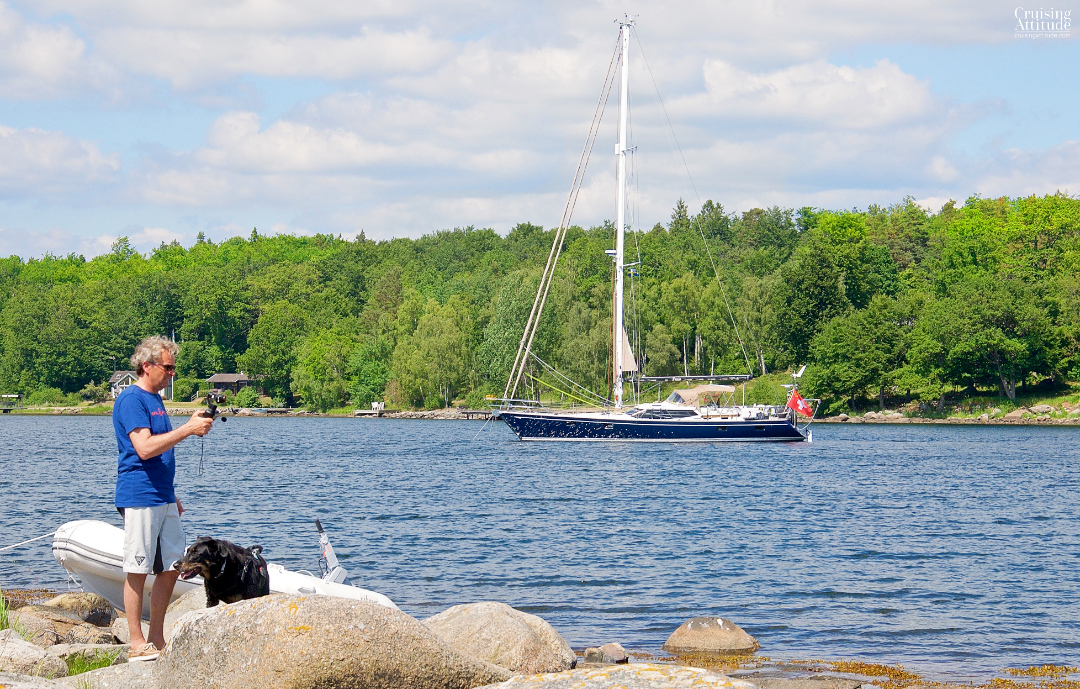 View of Skönviken in the Blekinge archipelago

We were all alone, since the school holidays had not yet begun.  It’s a wonderful anchorage because it’s well-protected but not far from the open sea.  You can take your dingy and row/motor over to one of the outer-lying islands to admire the view. 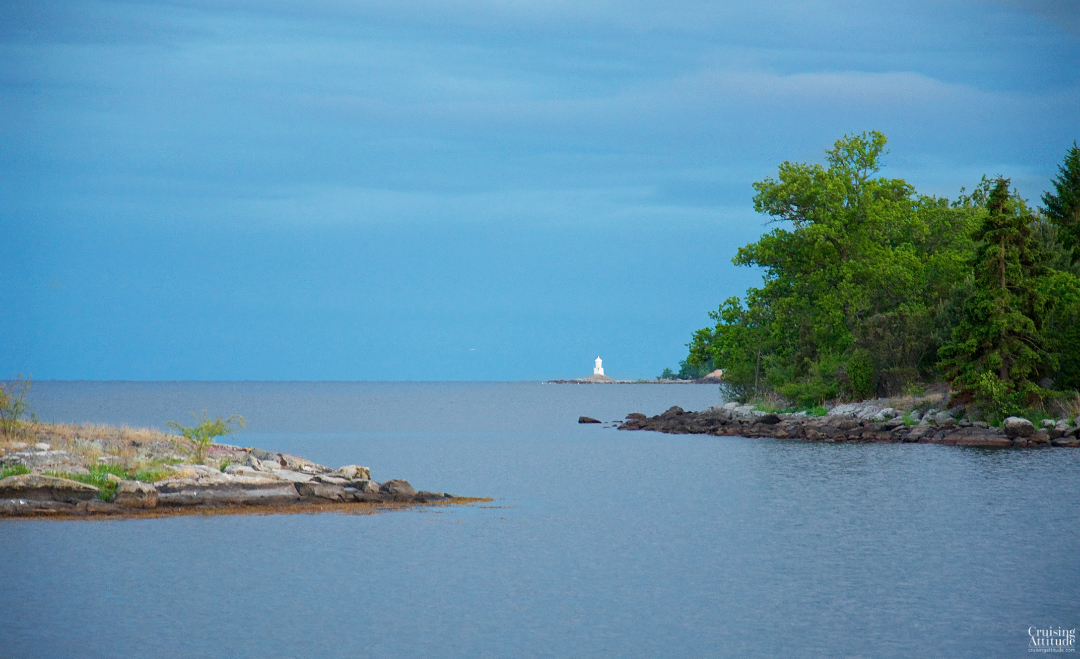 View towards the open sea late in the evening

The GPS coordinates for the anchorage are 56°09.48 N, 15°11.23 E. One warning for the Blekinge coast – it’s shallow and rocky.  There are underwater rocks everywhere, and when there aren’t rocks there are sandbars.  You need to be super-alert while sailing here!  You will often find underwater rocks near the entrance to and even inside the marinas.