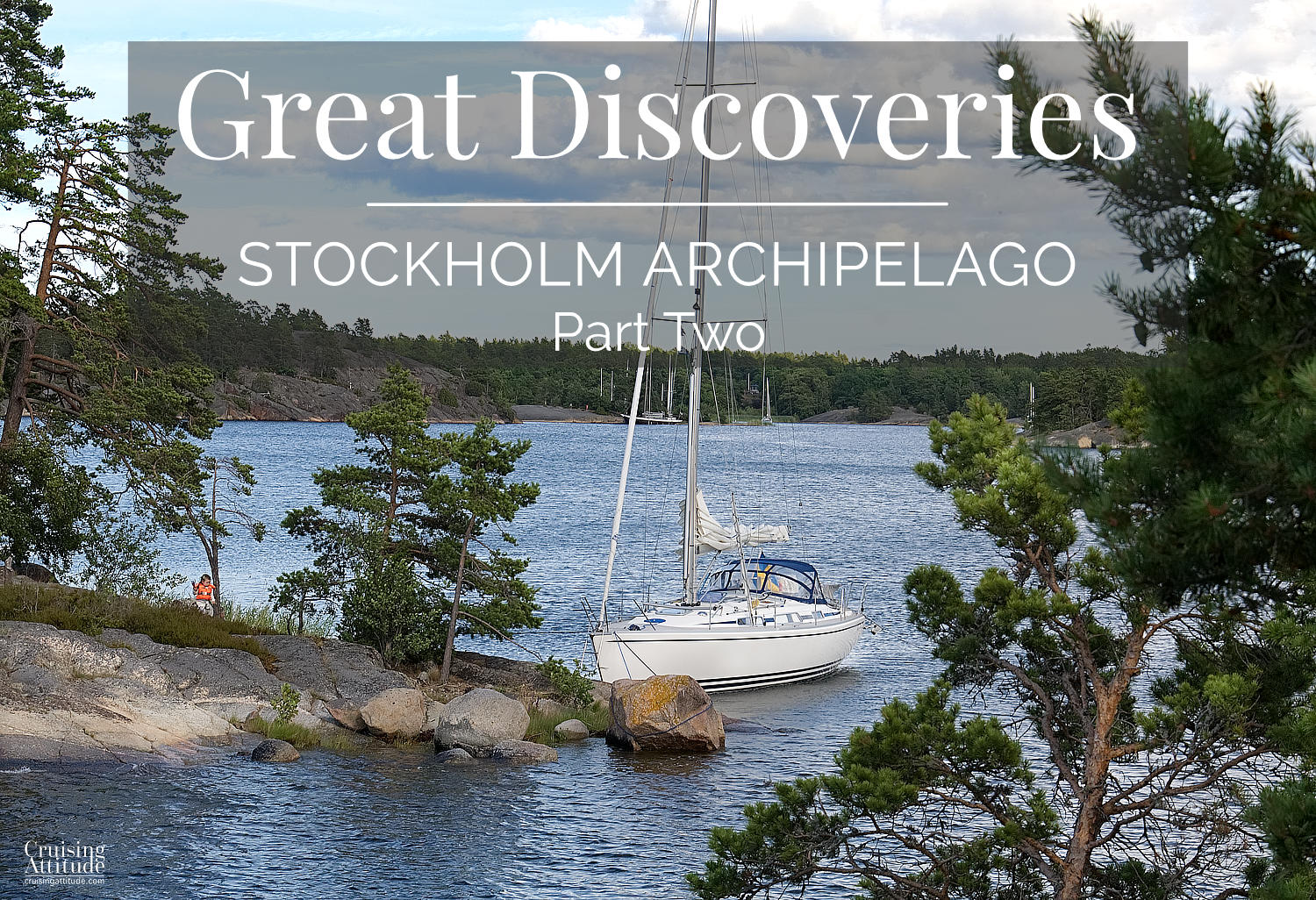 Enough already about the city of Stockholm!  Stockholm also has one of the world’s finest, most beautiful archipelagos.

To be truthful, only one of these islands, Lisselö, was a real discovery for me. For Jacques, they all were new discoveries, except for Sandhamn and Träskö-Storö, which we visited together back in 2013 in a chartered Bavaria 40.

Lisselö was a true find for us.  We visited it twice and each time, we were the lone boat in the anchorage.  It has a cozy feel since there are a couple of fishing cottages and a few summer houses here.  We liked observing the fisherman coming and going in their little semi-open boats, called Snipa in Swedish. They are kind of like  pick-ups for the sea.

The anchorage of Lisselö, not far from the outer edge of Stockholm’s archipelago

We did need a couple of tries to finally get the anchor to hold here, at around 10 meter’s depth. Perhaps there’s some seaweed growth on the bottom.  If you’re anchored just so, you’ll have a view of the open sea through a shallow channel towards the east.  Lisselö is well-protected from all winds except for hard easterlies (that blow through the little channel). 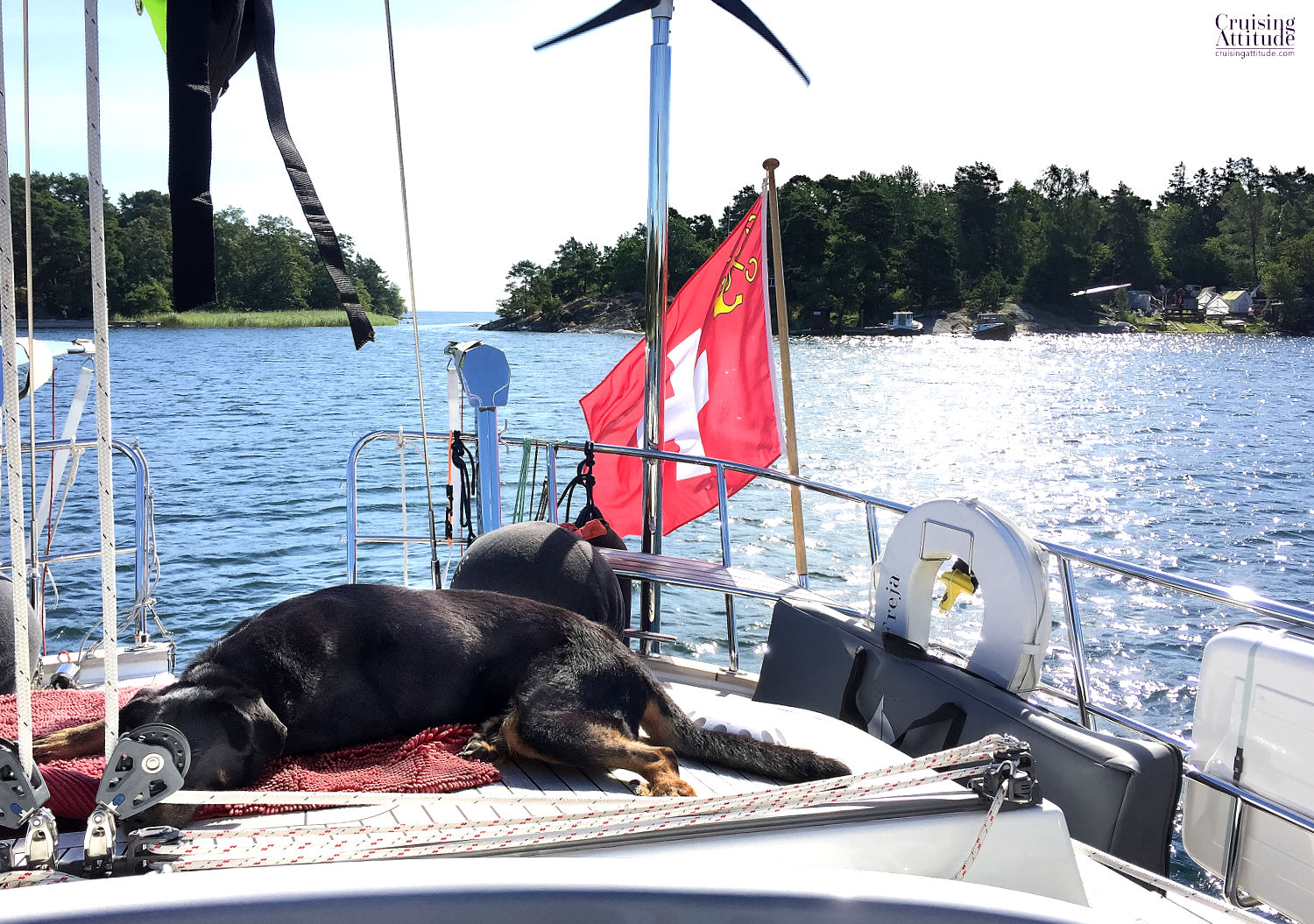 Senna drying off after a swim. You can see out to the open sea through this little channel.

We had a visitor at our anchorage in Lådna — a grey seal hunting for a meal.  We were sitting in the cockpit after dinner, each reading a book, when we heard a strange sound. It sounded like a whale exhaling through its blowhole.

It was a seal!  The sound is produced when they come up for air, open their watertight nostrils and exhale. We took some photos, but in all of them, the seal looked like a tiny black dot, even with a 120 mm telephoto lens — not worth putting up here.

The anchorage we chose was a new one for me. I’d been to the well-protected Lådna many times before but always on the western part of the island.  The entire series of small coves at Lådna was already crowded when we arrived at around 18.00, so we didn’t have a huge choice of spots.  Our little inlet on the far southeastern part had no boats at anchor when we arrived, so we quickly choose a spot there. We found good holding at about 8 meter’s depth. 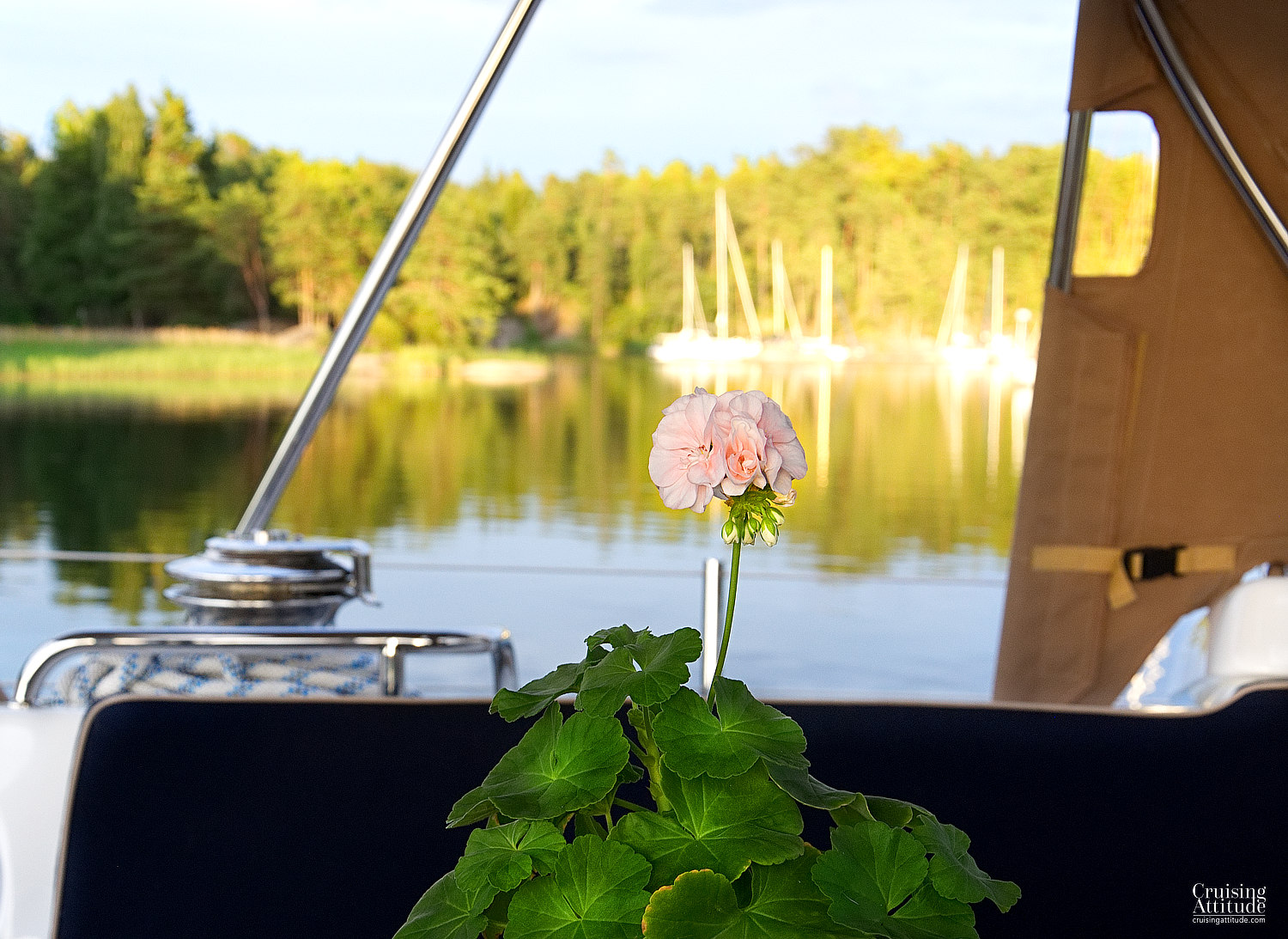 It’s nice to have some flowers in the cockpit – here’s our little geranium.

This is another anchorage I’d visited before, but never in the western part.  With a small boat, you can use the eastern inlets and tie to land, but with Freja, we need a good place to turn around our anchor.  And turn around we did! During the evening, the wind died completely, and all of the boats lying at anchor floated every which way.  We saw the track we made on the plotter — we had turned 360° around because of the lack of wind. 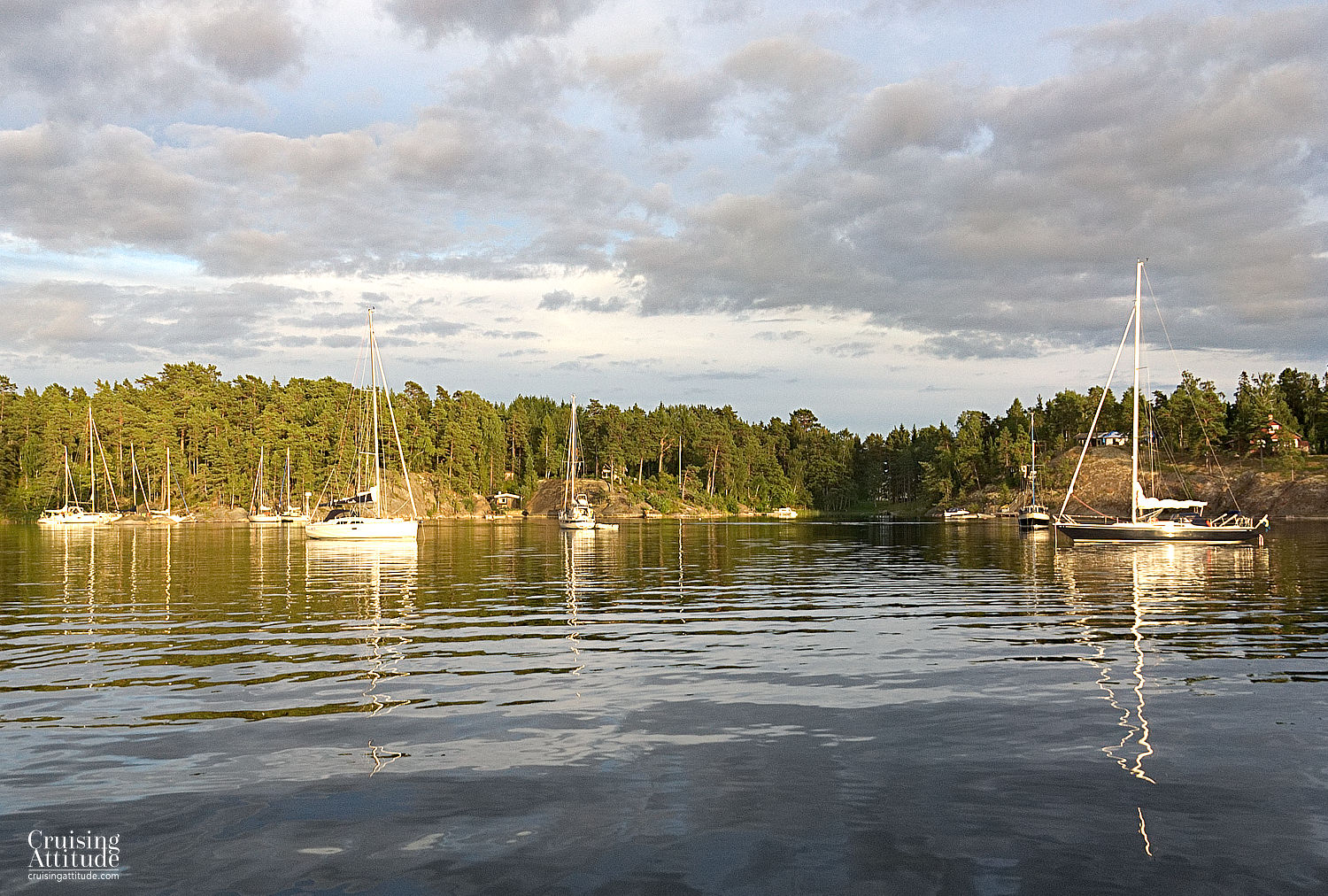 We had no wind at all in the Själbottna anchorage

The western bay of the island is protected from all winds and seas. We were anchored in about 10 meters’ depth (mud). 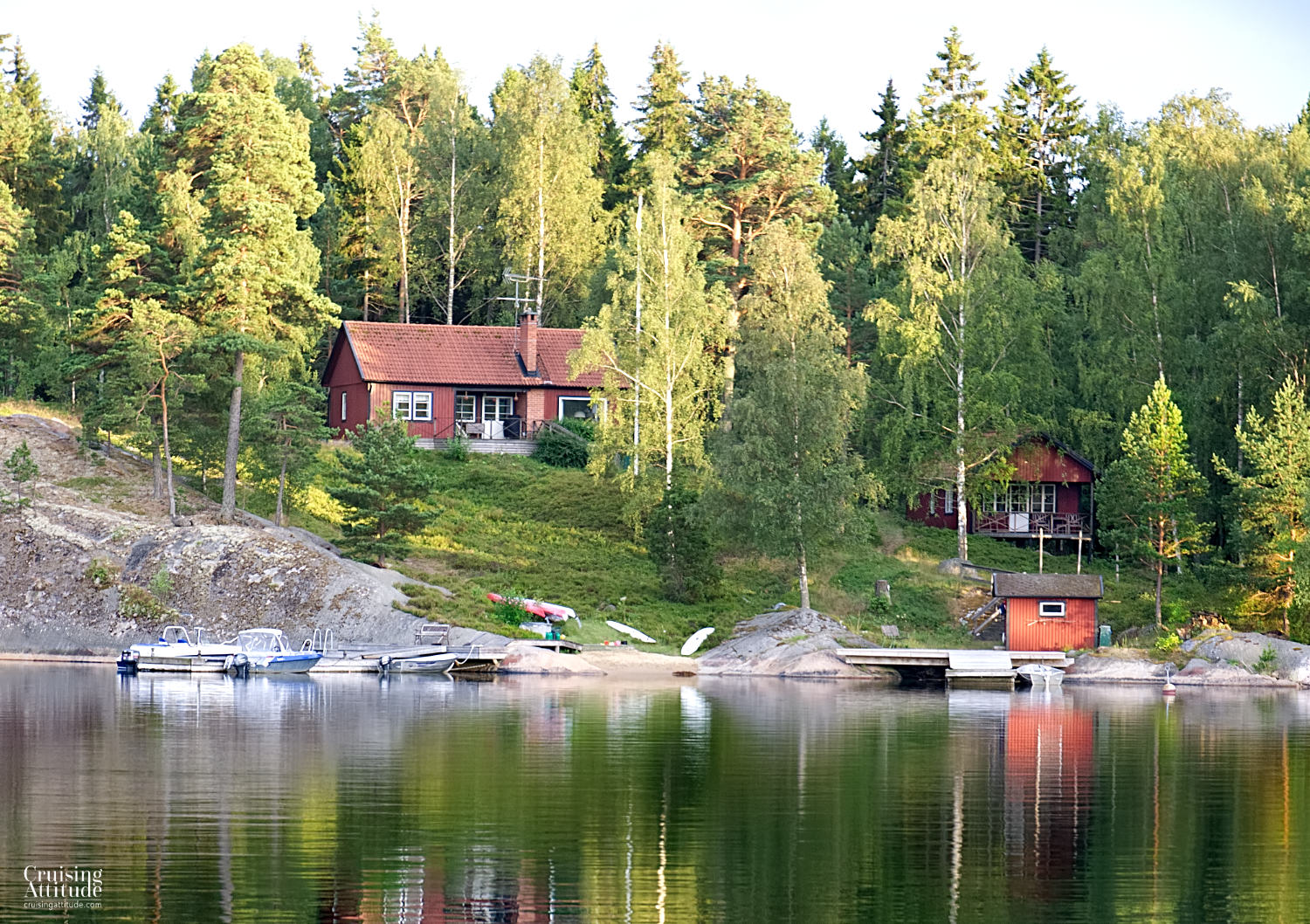 Cozy atmosphere in the anchorage

Sandhamn is the archipelago’s version of St. Tropez.  It’s the summer base for the Royal Sailing Society of Stockholm (KSSS), which means that almost every member will spend some time there during the summer.  If you enjoy bars and house music, people and yacht watching, this is your place during the summer.  Outside the period of June 20th to August 10th, it’s a much calmer place, and during the colder months, when only the year ‘round population is left, it’s pretty much in hibernation mode. 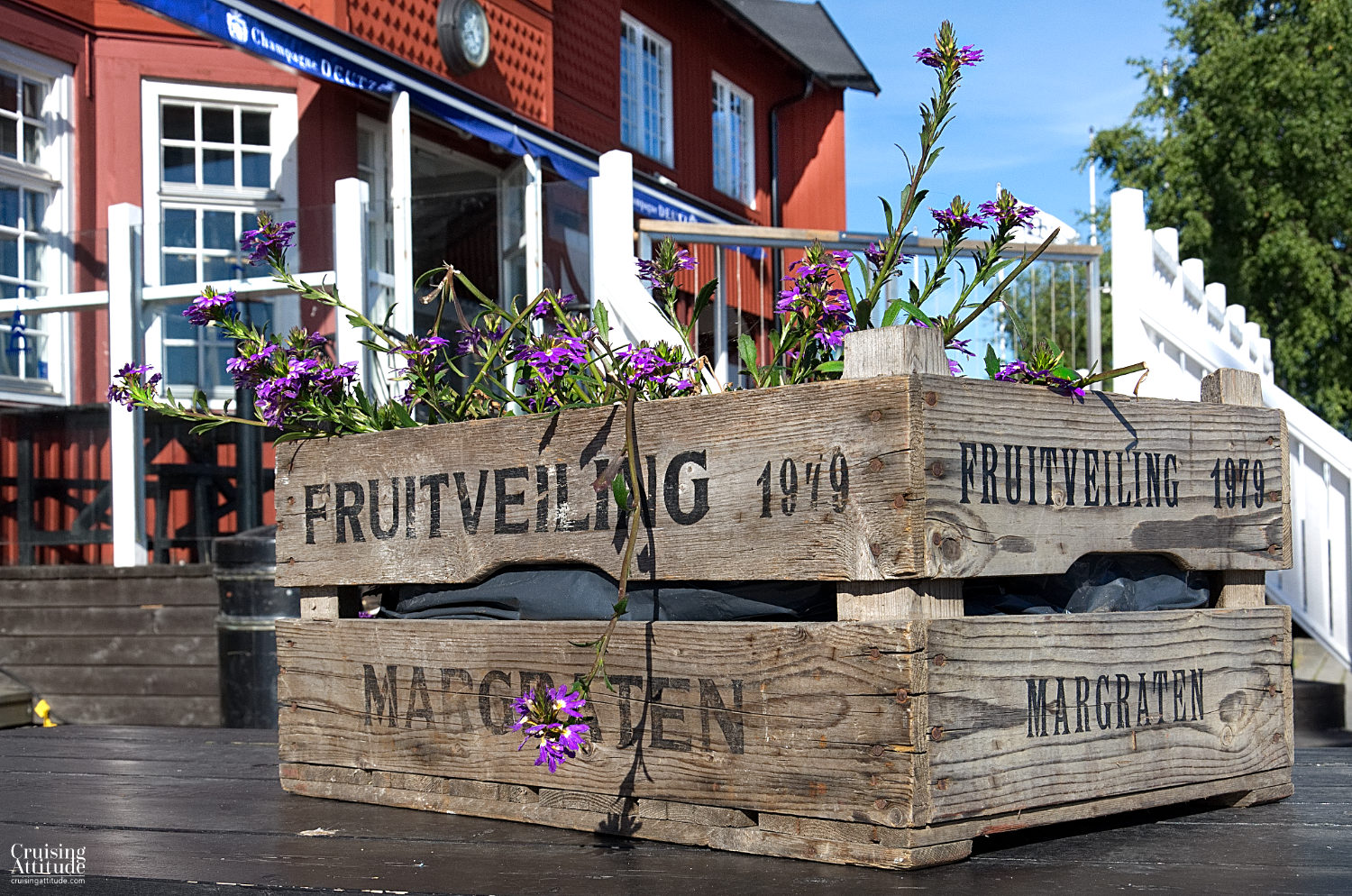 Sandhamn is the most popular marina in the entire archipelago

We visited Sandhamn with guests from Switzerland, just to show them another, livelier side of the archipelago.  There are several small boutiques selling clothes, home décor, souvenirs, local artwork and boat “stuff”.  Sandhamn also has a small grocery store and a lovely bakery.  You’ll find ice cream stands everywhere during the high season.

The marina berths are expensive during the summer and they are hard to come by, so you really need to reserve a berth or risk ending up with nothing. 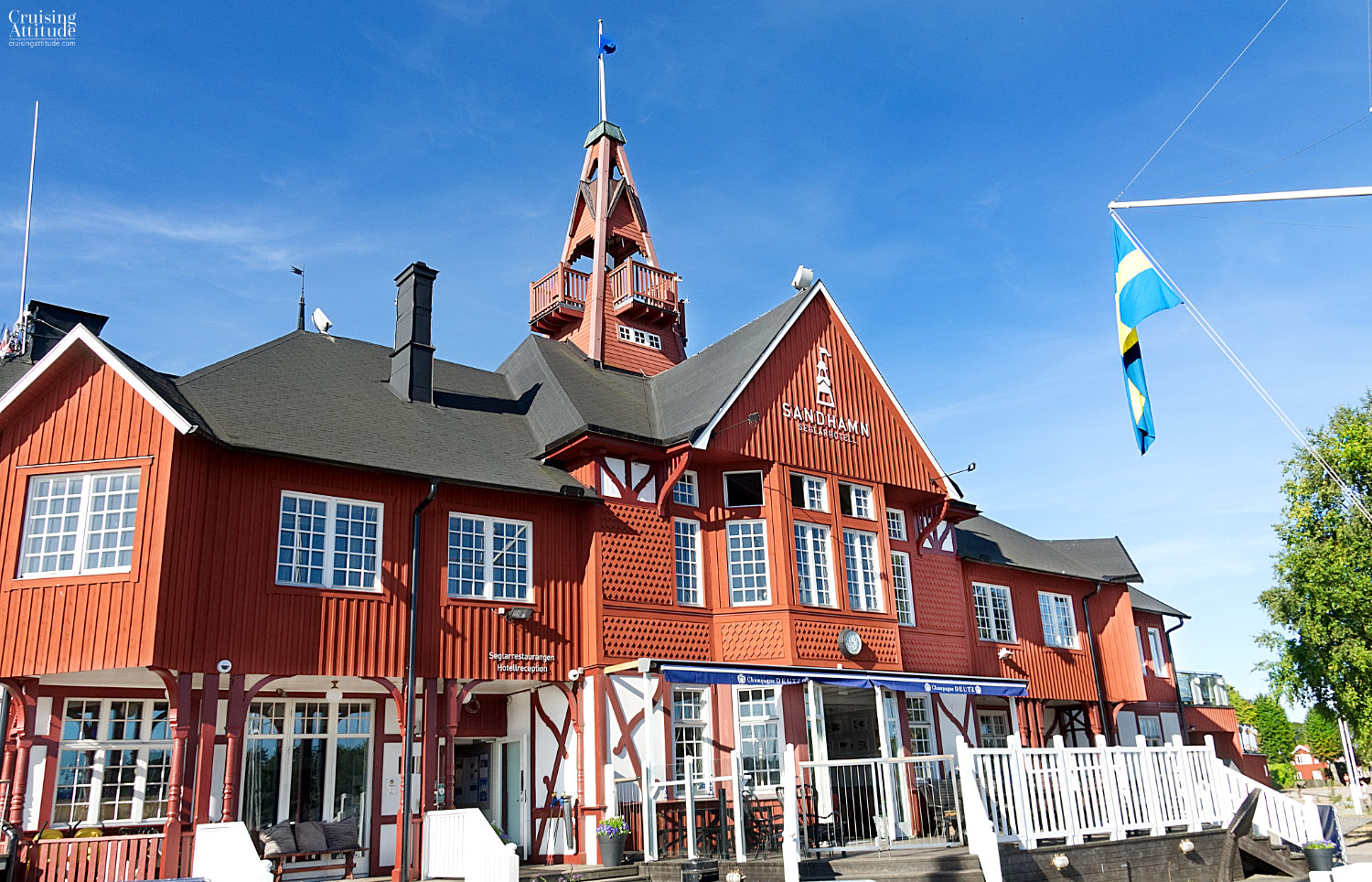 The Seglarhotellet houses part of the hotel as well as 2 restaurants and bars.

The prices there run from 310 SEK to 380 SEK for a boat up to 38 feet, depending on the season, plus a restaurant voucher fee of 300 SEK.  For a boat like Freja, 55 feet, it’s either 550 SEK or 620 SEK, plus the voucher fee, depending on the season.  The restaurant voucher, for which you are billed 300 SEK  is worth 350 SEK in any of the hotel’s restaurants or bars.  We had planned to have dinner at the restaurant, anyway, so we got 50 SEK out of the deal.  It’s a strange system; obviously to strongly encourage you to eat at one of the restaurants. 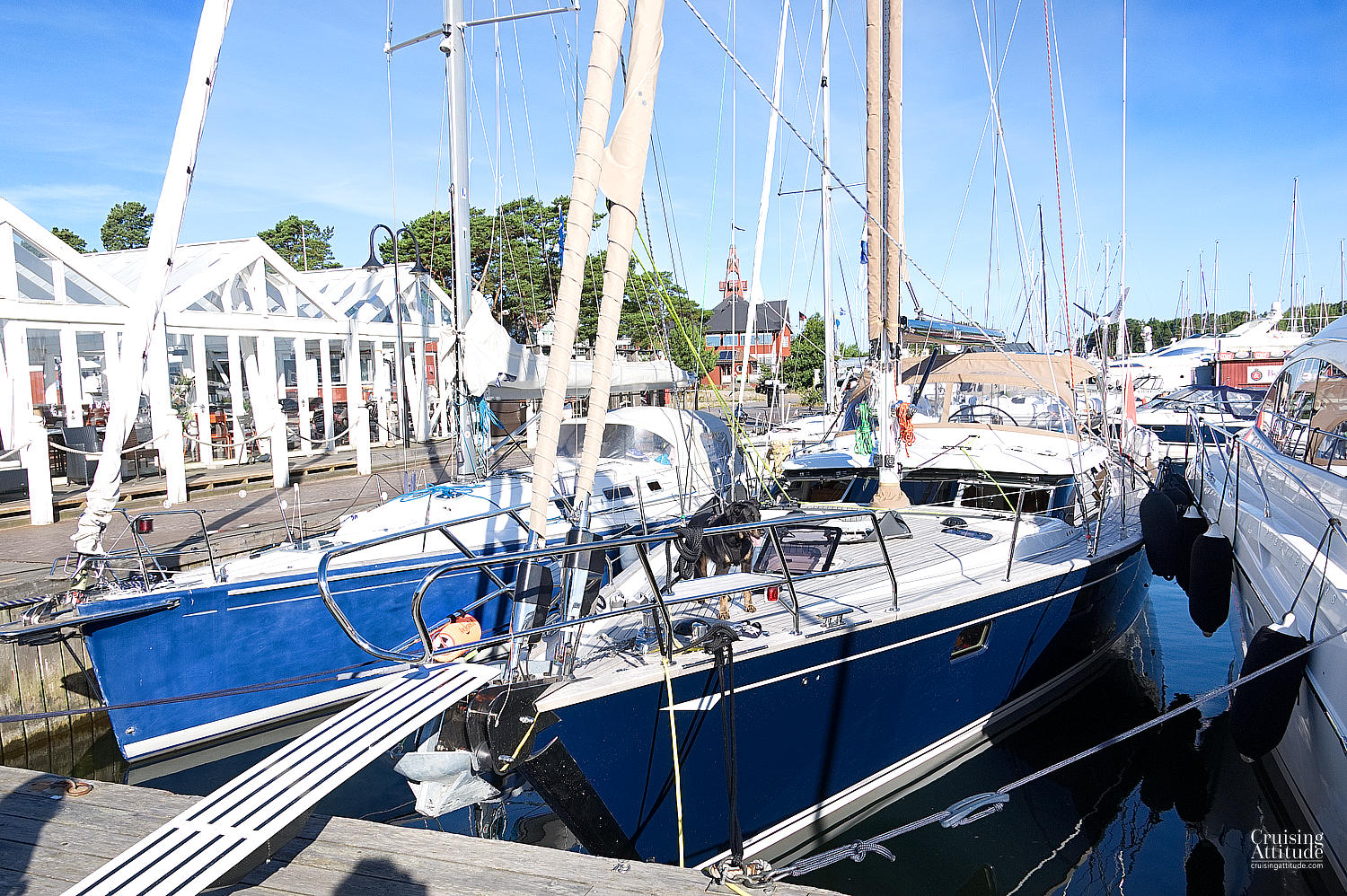 This is the marina attached to the Seglarhotellet. It was a tight squeeze for Freja.

I don’t think we would return to Sandhamn during the high season again, unless we had guests that really wanted to go there.  It’s just so much more expensive than any other marina in or around Stockholm, and it’s not really our style, especially at night with all the noise!  During the off-season, it’s much more quiet, but then all of the little shops have closed and the bakery is open only three days a week and a few of the restaurants have closed for the season…

Träskö – Storö is a huge anchorage that spreads out over a few different islands and inlets, so there’s always room for one more boat.  There is just one area to avoid if laying at anchor, though, especially with a west wind blowing.  I’ve marked this on the map.  It’s one of the most beautiful anchorages in the archipelago, in our opinion. That explains why we stayed for 2 or 3 days each time we came here.  On weekends, there’s usually a “bakery boat” that sells bread and pastries by going from boat to boat. 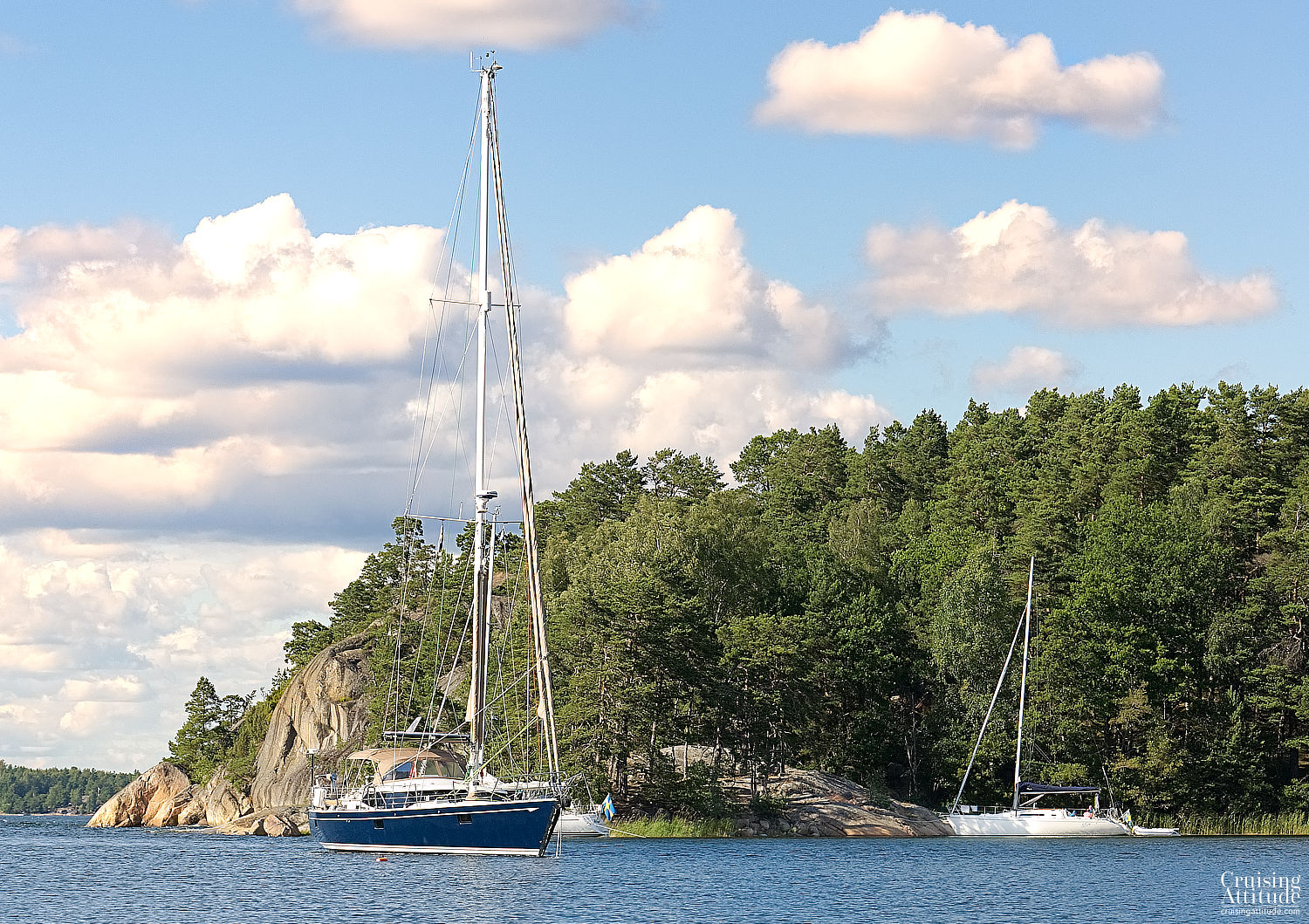 Just a tiny part of the anchorage on Träskö-Storö

Gällno is one of the few genuine islands left in the archipelago.  It still has farms and fisherman, unlike most of the other islands which are 80-100% summer cottages. You may hear a tractor working a small field or cows mooing.  It’s an anchorage relatively close to Stockholm, so it’s a good choice if you’ve gotten a late start to the day, or if you want to drop the anchor for lunch.  The anchor bottom is thick, heavy mud and it’s well-protected from winds and seas. 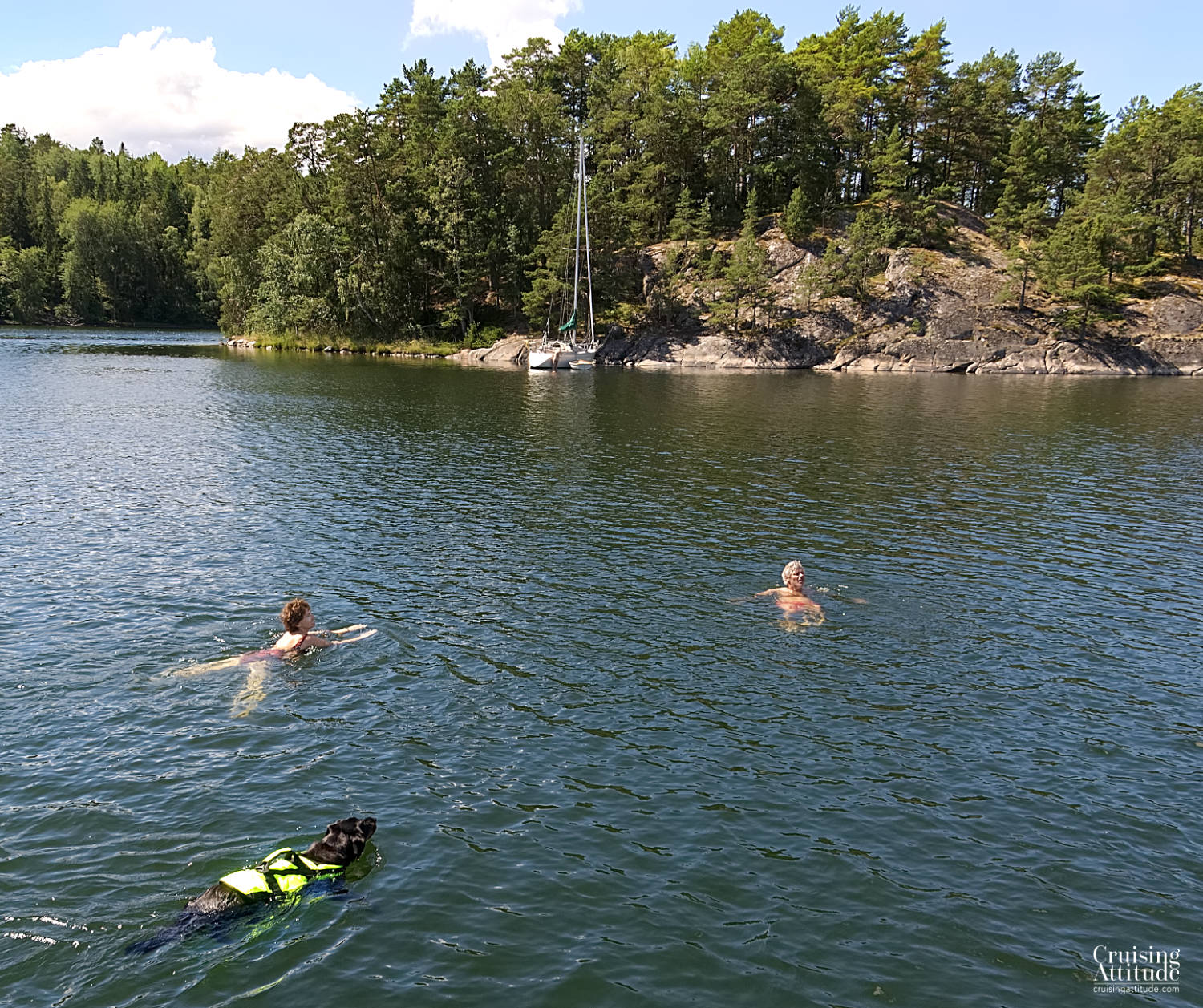 Our guests from Geneva swimming with Senna. The water was only 20° C. 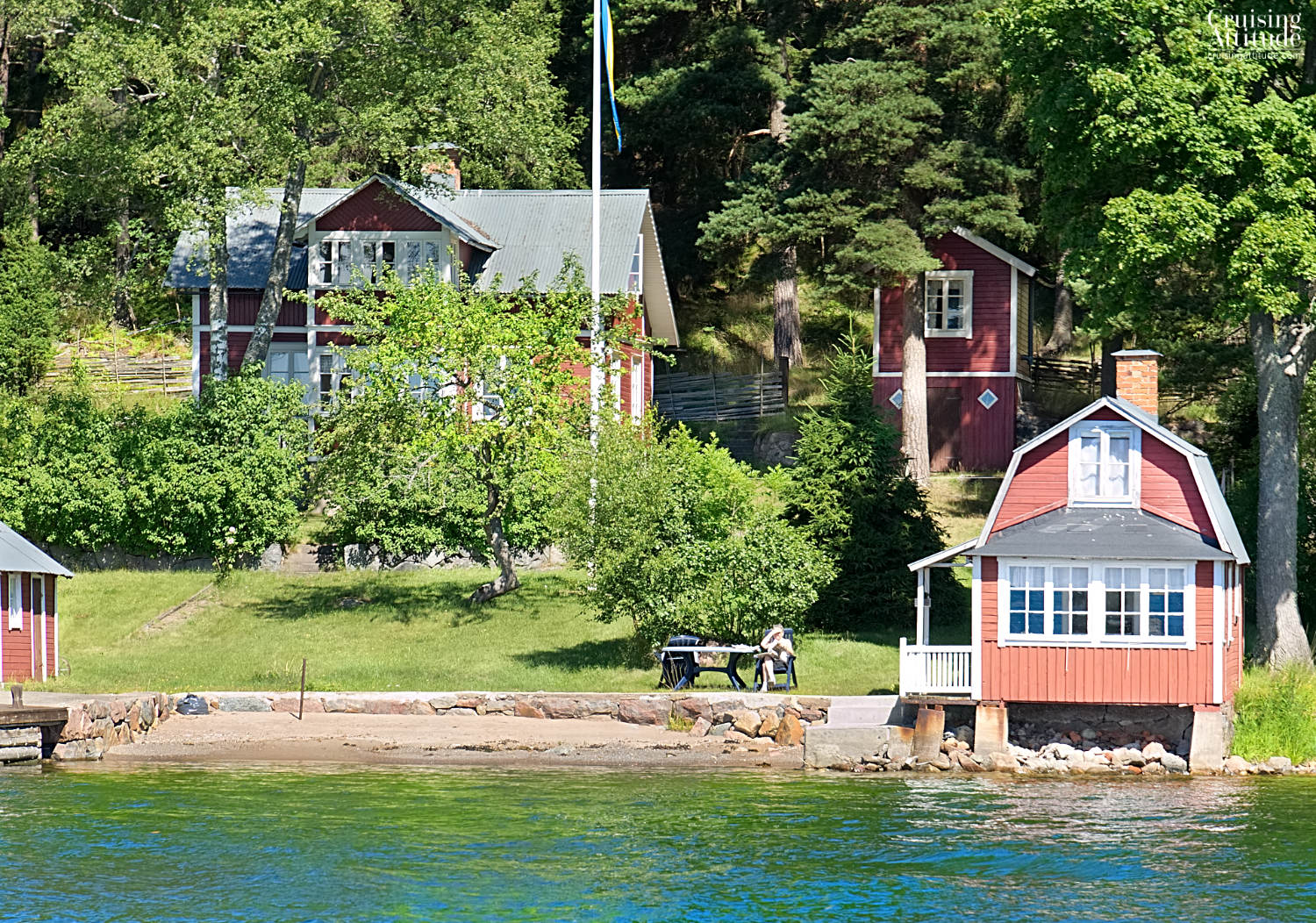