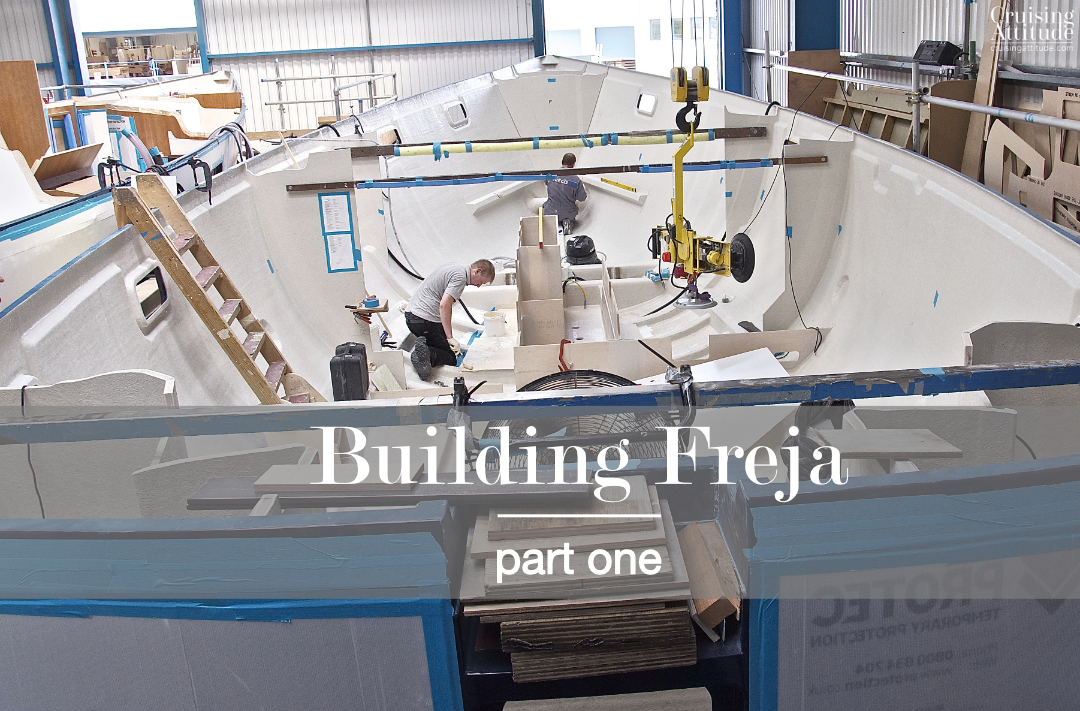 Discovery divides its build process into 3 stages (A, B, and C), depending on when each item needs to go into the boat.  By May of 2014, we had made decisions on the “A” items and most of the “B”s as well. Here are some of the decisions we made and the reasons behind them. 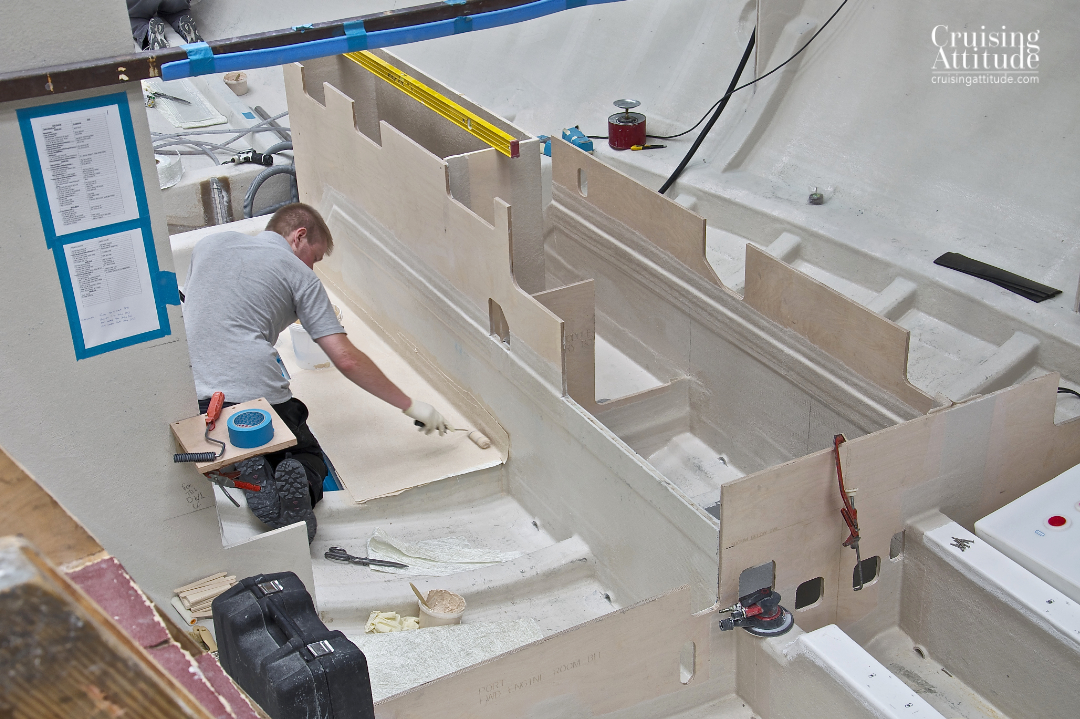 Sofa that converts to a berth for the starboard side of the saloon, instead of the pilot berth many people choose on their 55’s.  One couple ordered a kind chest of drawers/cabinet there, for charts, drinks bottles and cocktail glasses.  Another wanted 2 easy chairs like you sometimes see on the Najads and Hallberg-Rassys.  We liked the sofa solution because it gives you somewhere to sit and take off your boots.  It also gives more floor space for our dog to lie down. Finally, it makes a nice single berth with the lee cloth up. 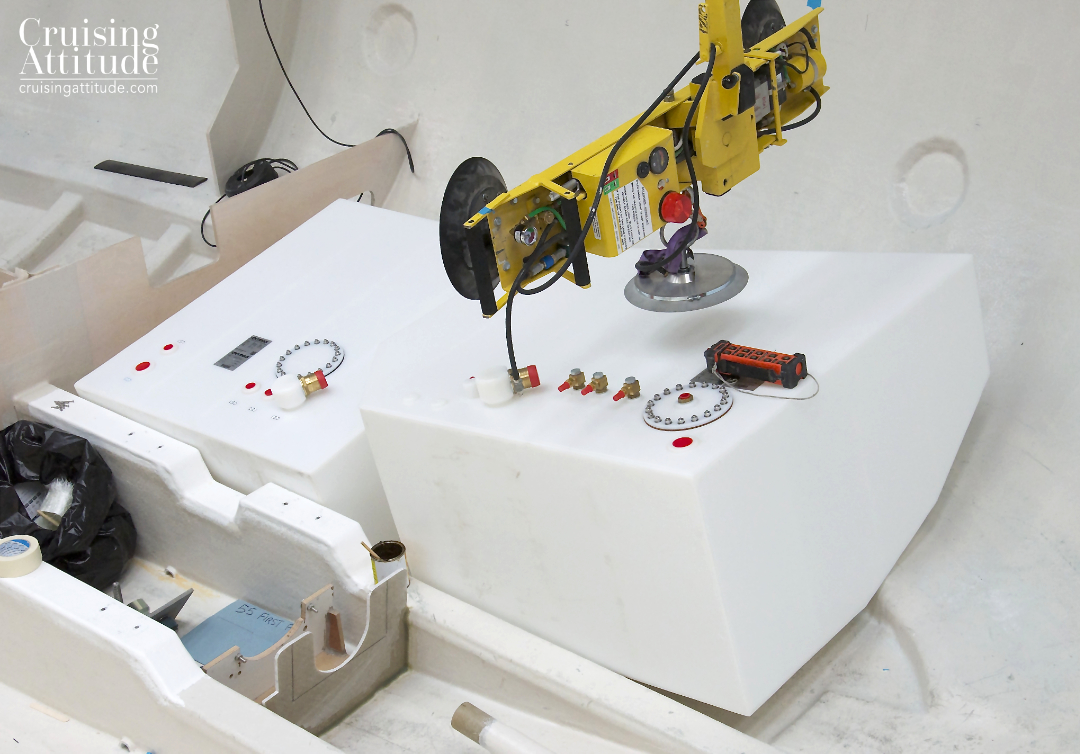 Fuel and water tanks going in

Pantry cabinet with sliding stainless steel baskets instead of a wet locker at the end of the galley.  These four baskets hold an incredible amount of stuff and we can always hang wet clothes in the showers (a bar for hanging clothes is always provided in both showers.) 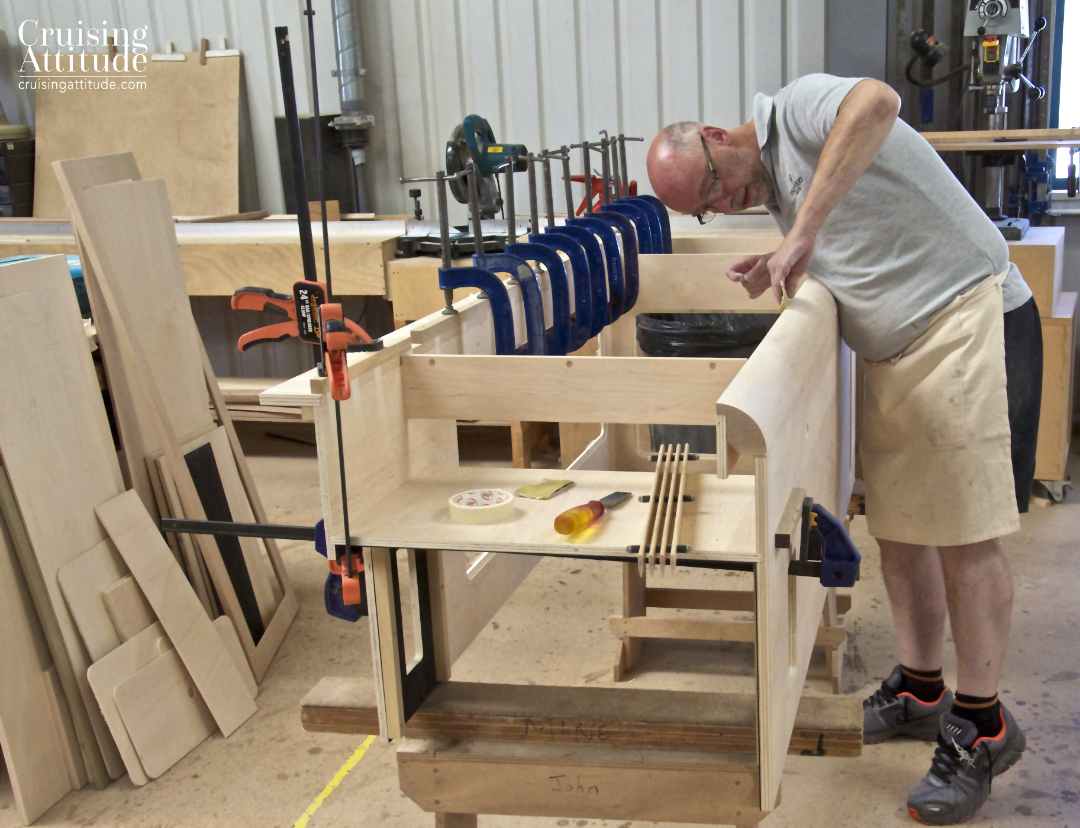 The woodworking shop at Discovery

Additional hanging locker in the owners cabin instead of a seat.  I don’t know why anyone would need a seat in the aft cabin, when you could just sit on the bed. This additional locker would give both Jacques and I our own hanging lockers for our “off-duty” wardrobe, and we would have equal storage space on both sides of the cabin. 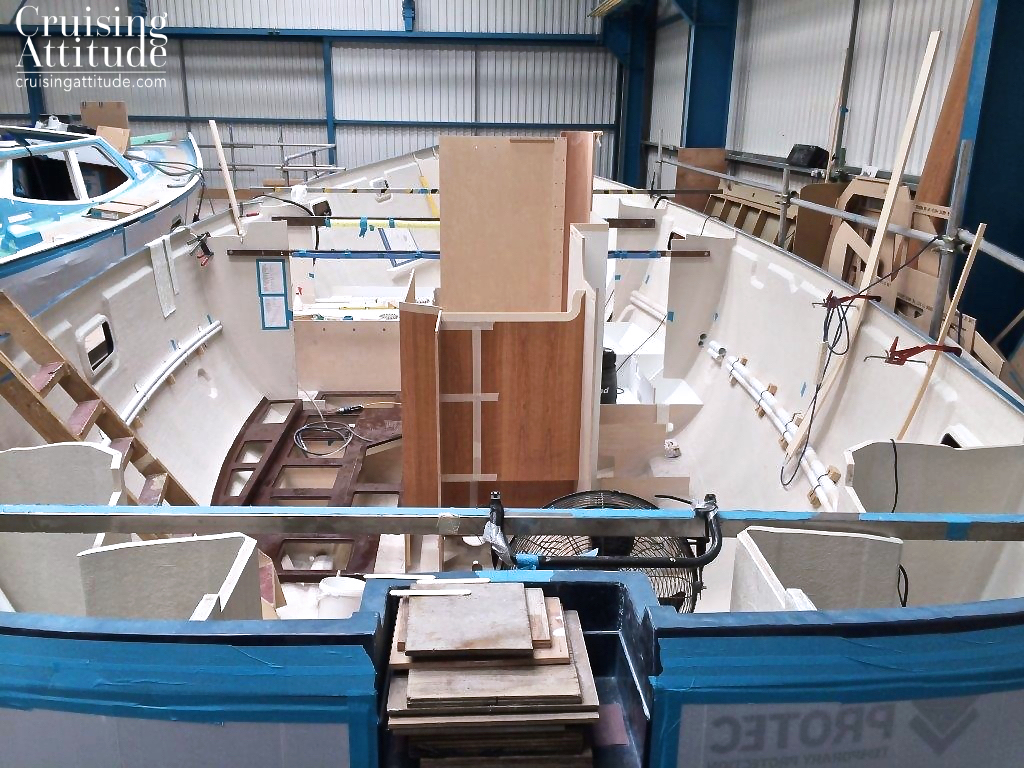 Cherrywood walls going up. On the left, you can see the beginnings of a galley

Upgraded windlass to Lewmar V5 and modified anchor chain stowage. Because we ordered the 55 kg Spade and 100 meters of chain we upgraded the windlass to handle the increased load.  There is also a capstan next to the windlass.

Upgraded to all-stainless Andersen winches.  These winches are known for being the kindest to lines (less long-term chafe) and the easiest to maintain.  They are also beautiful to look at!

Stainless steel bow protector plate.  We wanted this after seeing so many boats with their bows nicked and scraped.

Additional mooring cleats.  Keeping with the philosophy of “each line its proper cleat”, we requested  two additional cleats at the bow and at the stern, giving us a total of 12 on the boat. 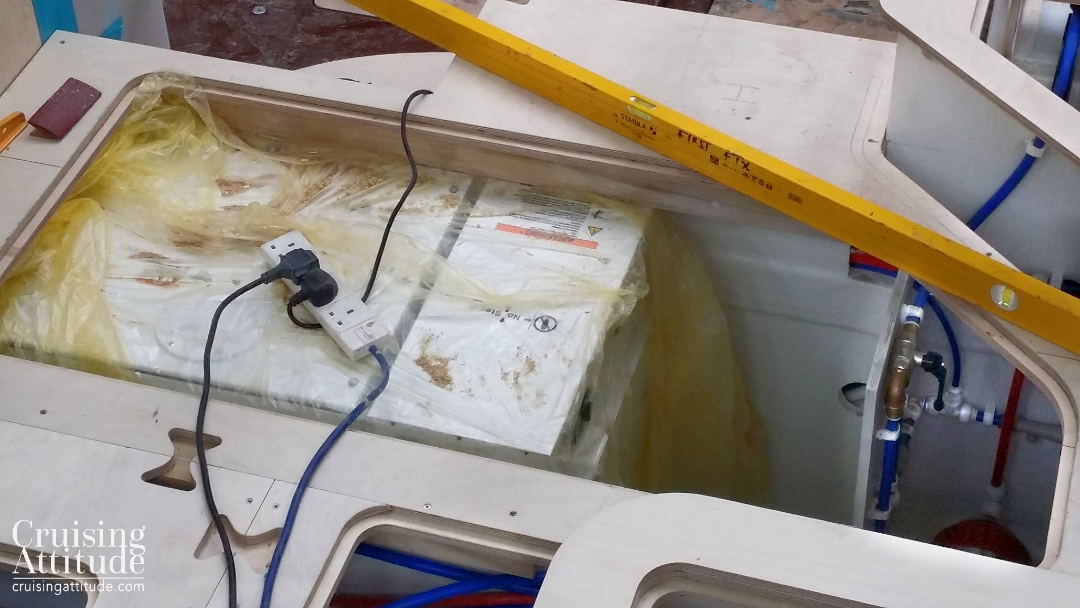 The Onan generator is installed

Twin fuel filter with alarm.  After witnessing what can happen when you have only one fuel filter, this  decision was a no-brainer.  (A fellow member of the Swiss cruising club was crossing the English channel with a chartered boat on a windless day, when the engine died in the middle of the shipping channel.  After informing the coast guard on both sides of the channel, it took him an hour to change the filter.)

Hot tub plumbing.  Well, of course!  We’ll be sailing in Scandinavia and northern Europe for the first few years.  The bathtub is also a great place for rinsing and washing things like our diving suits and equipment. This is one of the unique features of the Discovery 55. 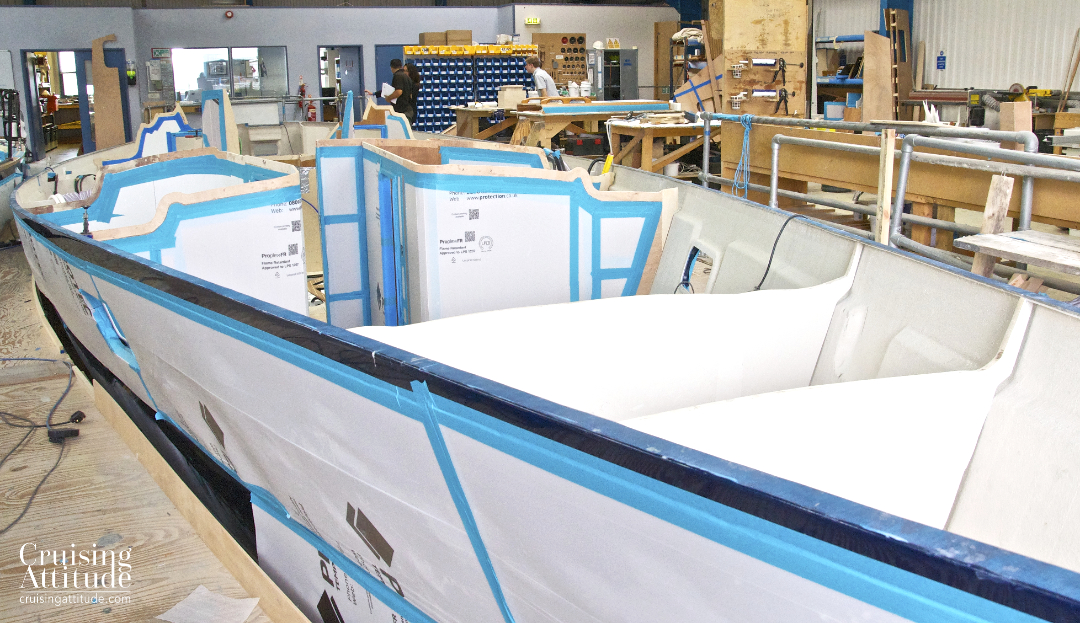 You can see the two waterproof bulkheads in the bow that will be fiberglassed in – the first contains the chain locker and the second, the sail locker.

Grey water tank.  My previous boat did not have one and I always felt embarrassed seeing our washing up water bubbles surrounding the boat.  It’s better to keep your grey water in the boat until you get out of the anchorage or marina and into open waters.

Backup Autopilot. Thanks to some great advice from our friend Leon Schultz, we decided to install a fully independent backup autopilot.  Leon’s words:  “you don’t want to be trying to repair your autopilot in the middle of a stormy ocean. If you can afford it, install a second autopilot to switch to in case the number 1 fails.” 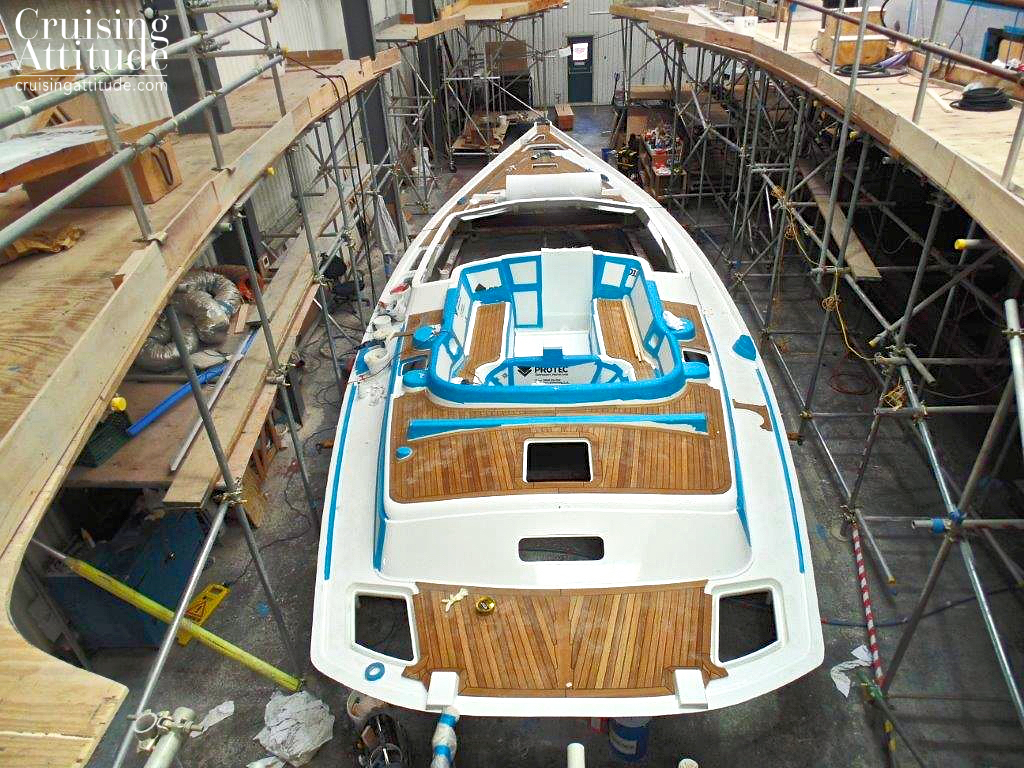 The deck is being built separately

In part two, I’ll go over some more of our equipment decisions and show the continuing build process.

Getting started: and the winner is… 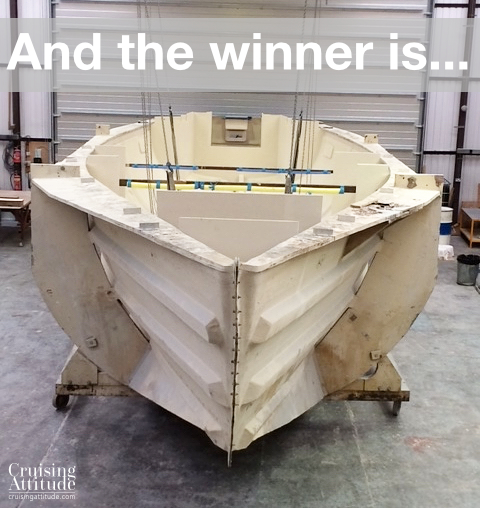 As we entered  into the fall of 2013, we realised it was time to make a final decision.  All three boats that we were interested in had combined waiting list and building times of up to 18 months and we wanted a boat for early 2016.

Why we decided on the Discovery 55

All three boats, the Discovery, the Hallberg-Rassy, and the Regina af Vindö fulfilled all of our original requirements. The most important reason for our choice was that the Discovery is a semi-custom build.  It was not the most expensive of the three.

During our first meeting with the yard as “owners”, we realised that building a Discovery was going to be a lot of work for us.  There were a million possibilities in terms of options and customisation..  We had researched and discussed lots of good ideas to steal and bad ideas to avoid on other boats. We wanted to incorporate the good ones into our boat.

For example, we found out that we despise rounded-off, oval-shaped dinettes while sailing the Bavaria 40.  Why?  Because our favourite activity at the end of the day is putting our feet up with a good book and a cup of tea or a glass of wine.  In the cockpit, that’s easy, you lean against the cabin wall and put your legs up on the bench.  Inside, if the saloon is oval as they are in most Discoveries and recent Oysters, you can’t lean against anything flat.  So we requested a rectangular dinette with perfect 90° angled corners.

At the time of signing the contract, we needed to have decided on four things to begin the design process:  the colour of the hull, the hull option, the keel option (regular or shoal) and the choice and size of anchor (because the anchor determines the stem head design).

The only thing that is always the same for each Discovery 55 is the hull form, although there are two options — for either vertical or horizontal windows in the rear cabin.  The the vertical ones are larger, we thought the horizontal ones looked more balanced.

You can choose any colour you want and we chose the classic and elegant navy blue that most Discovery owners have chosen.  At first we wanted a white hull, thinking that the dark blue would make the interior of the boat hot during a sunny summer day.  But after speaking with John and checking with some other owners, we felt assured the insulation was thick enough to prevent this, and we changed our minds.

I had already done tons of research on what anchor was best, and although the is no “one best anchor”, the Spade won out over the Rocna and the Ultra because:

After reading the excellent advice of John Harries over at the Attainable Adventure Cruising website, we specified an oversized 55kg (120 lb) S-200 galvanised Spade.  John advises that you should go, if possible, two sizes up from the table specifications. He gives a number of compelling reasons for it. He jokes that if the marina isn’t laughing about the size of your anchor, it’s not big enough.

We wanted the shoal keel to give us more possibilities in the archipelagos of Scandinavia.  We were to be the first 55 with a 1.8 metre (5.9 ft) keel.

Discovery now had the answers to this three questions and could officially move our boat into the construction pipeline.  The build was to begin in February 2014.

The laminating process begins – and here are the first photos of Freja.  We had to decide about everything that has through-holes since the balsa layer needs to be cut out from each of the hole areas. 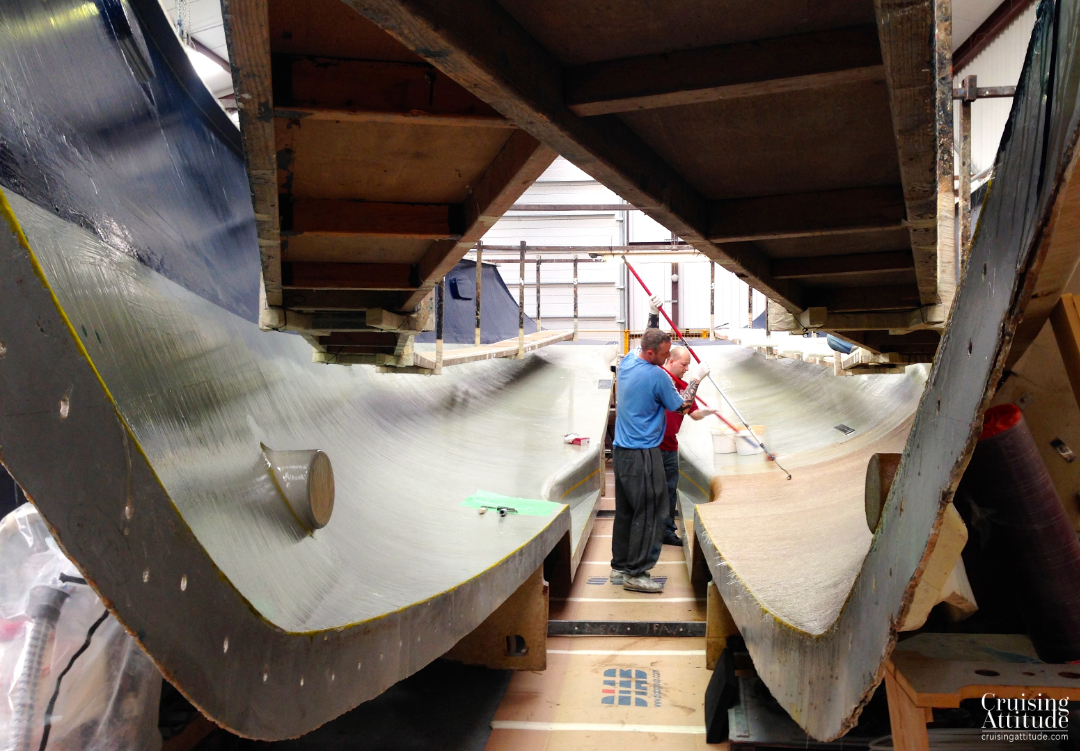 Gelcoat and epoxy layers finished – first layers of fibreglass go in the mould.

Another view of the fibreglass layers going in 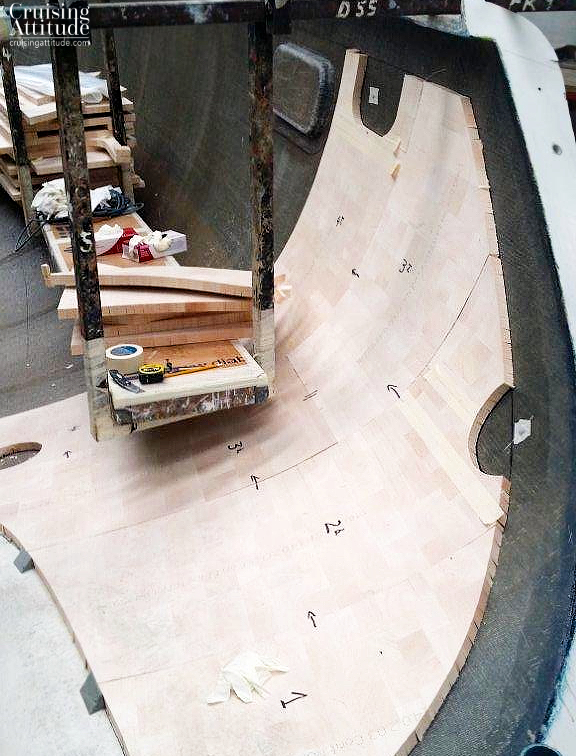 The end-grain balsa wood layer going in. This is the insulation layer. 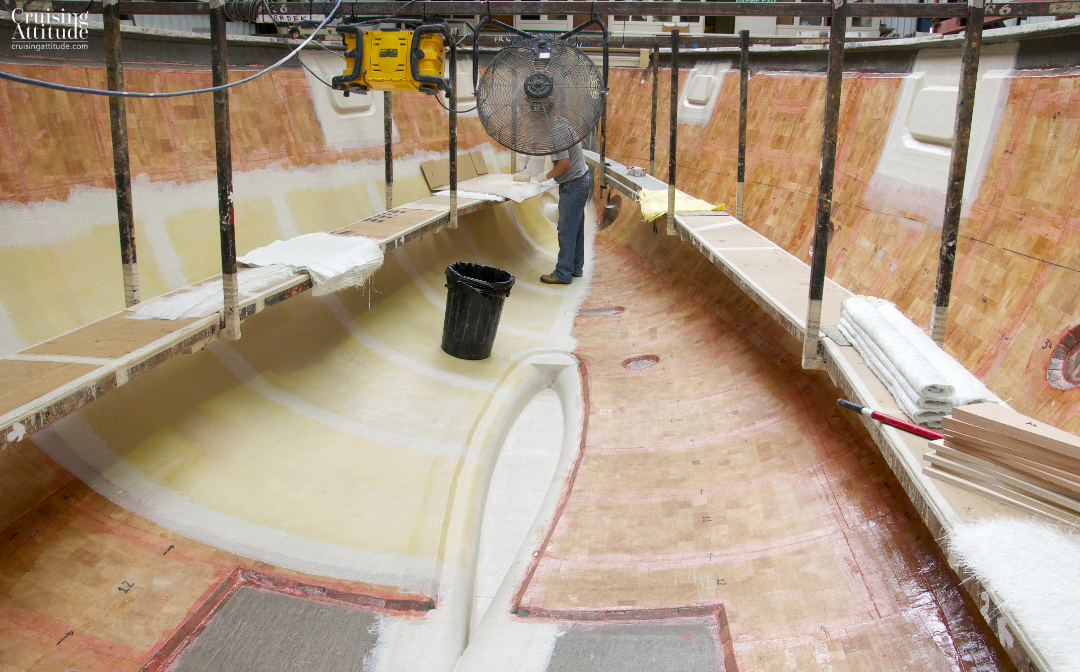 Kevlar layers are added for extra strength at the front of the hull. The yellow sheets are Kevlar, the white sheets are fibreglass. 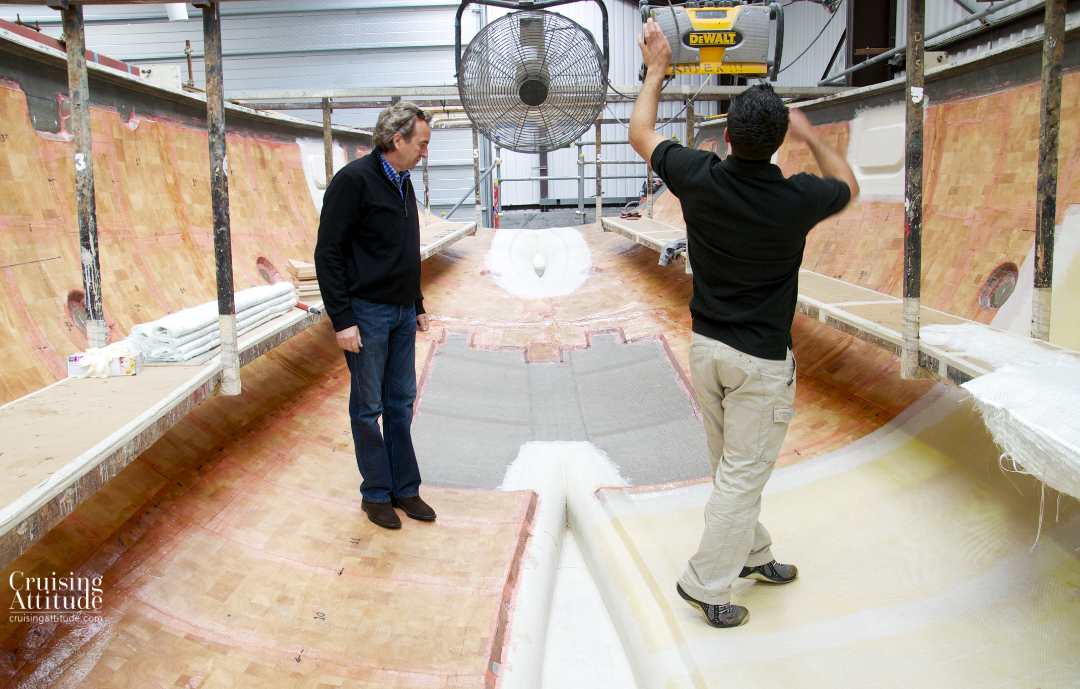 Jacques checking out the Kevlar layers 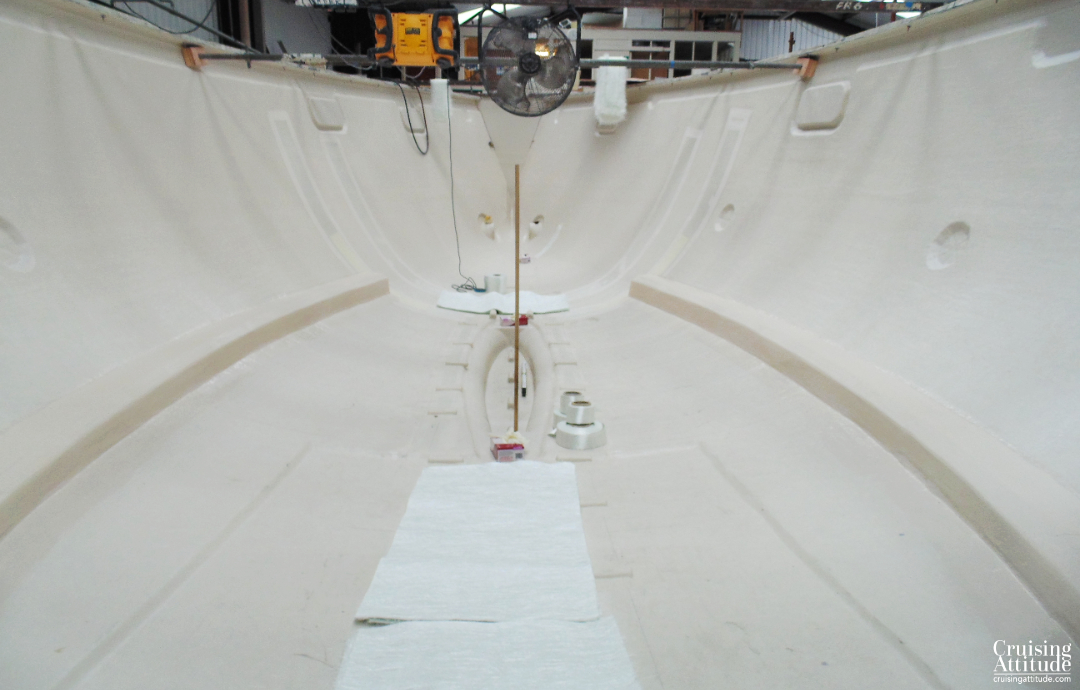 The final fibreglass layers are laid in