After our pleasant but short stay in Mollösund, it was time to continue southwards.  Our first stop was Marstrand to fill up our diesel tanks.  There are two fuel stations at Mollösund, but as it was still “dead” season (not even low season) in Mollösund, we were afraid that the diesel in the tanks there would not be high quality — perhaps diesel bug had been growing there all winter. Since Marstrand gets a lot more traffic all year-round , we figured it would be a better idea to fill up there. 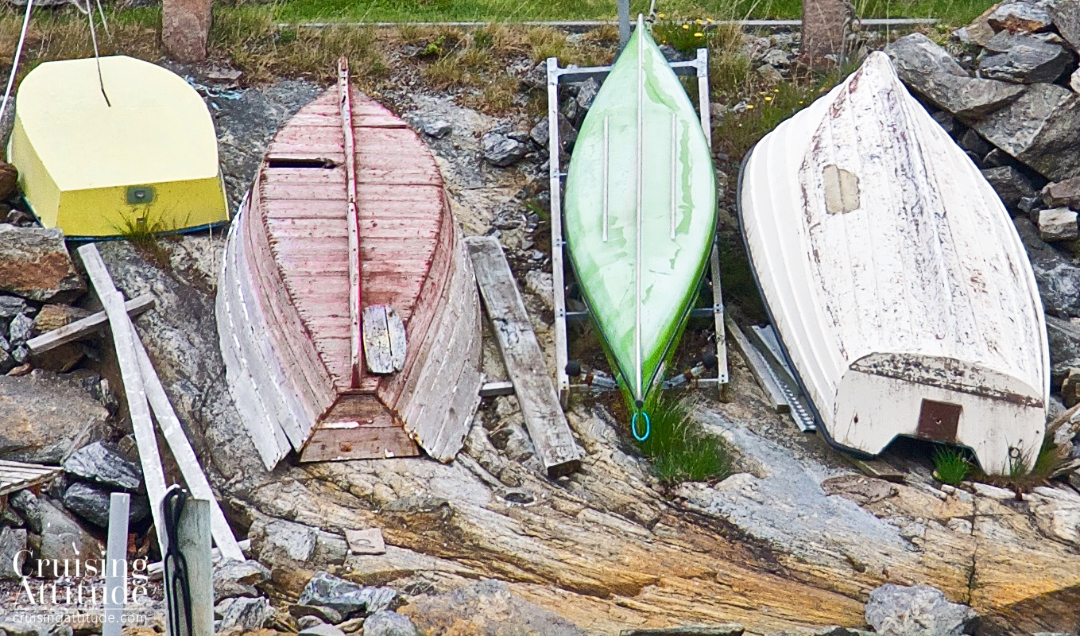 Passing a little fishing village on the way to Marstrand

About 1’000 swiss francs later (which is about the same amount in USD), our diesel tanks were filled and we were on our way. Ouch!  For those of you who don’t live in Europe, fuel is expensive here because of all the taxes on it.  It is kind of unfair that boats have to pay road taxes on diesel, but that’s the way it is…

We stopped for the night at Rörö, just north of Göteborg.  Rörö is a little fishing village that’s turned into more of a weekend and holiday village during the past 20 years.  The fishing huts and boats are still there, but there are more and more beautiful new houses.  I say “beautiful” because I appreciate the modern style of Swedish house and apartment building architecture. It seems to be all about wood, large windows, simple lines and discrete colours.

We were the only boat in the marina at Rörö

Rörö marina has lots of space for  alongside mooring, important for us, since Freja is usually too wide and too long for normal boxes or Y-berths.  In addition, it’s much easier for Senna to get off the boat from the side.  We’ll see how it goes if we ever have to moor bows-in as some marinas in Sweden require. As it was dead season, we had access to water but the electricity was not yet turned on.

Fishing boats – and us.

Crushed mussel shells high up on a cliff on Rörö. How did they get there? Seagulls?

Looking our over the open sea on Rörö island

We had ideal sailing weather as we slid past  the islands near Göteborg.

We saw this beauty – HMS Falken, an training boat from 1947 for the Royal Swedish Navy.

Still rather cold but we’re enjoying the sun!

Our next stop, south of Göteborg, was an anchorage called Ockerö-Hamnholmen (not to be confused with Ockerö just outside Göteborg).  We were alone in this fabulous anchorage.  If you have a dingy, you can go to the northern side of the anchorage for stupendous views of the open sea and the entire cove.

The advantage of off-season sailing: we were all alone in this lovely anchorage

We had a clear and sunny day, and saw all the way out to Nidingen, a well-known lighthouse and weather-reporting station in Sweden.

We continued on to Glommen, just north of Falkenberg, and and them sailed on to Båstad.

This is Senna’s second-favorite place if the boat is not heeling over.

Båstad is a well-known tennis championship and summer holiday town.  We were thoroughly charmed by Båstad and stayed 3 nights.  For once, the marina was “open” – electricity was on, cafés, restaurants and shops were open, and there was lots of life around the harbour.  It could have been because we were there during the ascension holiday.  The Thursday is a holiday and most people take Friday off from work, giving them a big 4-day weekend.  Back when I lived in Stockholm, this was always the first big sailing weekend.

View of Båstad marina and the hills above the town

Summer weather had suddenly arrived as well.  We went from about 10°C to 26° in a day.  The down jackets went into the closet and the shorts came out.

Båstad marina at 20.00 and still lots of sun — the days are getting longer and longer

The marina itself is quite pleasant with lots of alongside places as well as boxes for boats 40-42 feet or less.  Ice cream shops, bars, cafés, and restaurants abound. Don’t come during the tennis championships or in July, though.  I’m quite sure it’s overfull and quite loud.

View of the interior part of the marina in Båstad

The town of Båstad is a short walk or cycle up the hill.  You’ll find a supermarket and boutiques selling clothes, decor, shoes, etc.  There’s also a tourist office stocked with information about the area around the entire peninsula, called the “Bjärehalvön”(Bjäre Peninsula).

The rolling hills above the town of Båstad

After 3 lovely days in summery Båstad, we were off to yet another well-know summer holiday town, Mölle.

The marina in Mölle is rather small, so it’s best to get there early.  The problem is that if it’s full of Danish boats, they don’t have far to go, so they tend to stay late.  When we arrived at about 14.30, the marina was still full of boats from Denmark.  We tied up to a fishing boat quay while they finished eating their lunch.  After a half-hour’s wait they started to leave, one by one, and we could finally tie up for the evening.  There’s room for 6 or seven larger boats alongside and there are a few boxes for smaller boats 38 feet and under.

Calm Sunday evening in Mölle marina. You see the Grand Hotel in the hill in the background

Bronze statue in the harbour of Mölle

It was a summery Sunday — about 28° — almost unheard of in early-May in Sweden.  The harbour in Mölle seems to be the centre of activity for the area and the various seafood cafés, ice cream shops and bars were full.  The restaurants and cafés at the marina are more of the fish and chips variety, so if you want to have a really good meal, you’ll have to walk up to the Grand Hotel. Or cook a good meal on the boat!

Sunset and golden light in Mölle Harbour. This was taken at about 21.30. 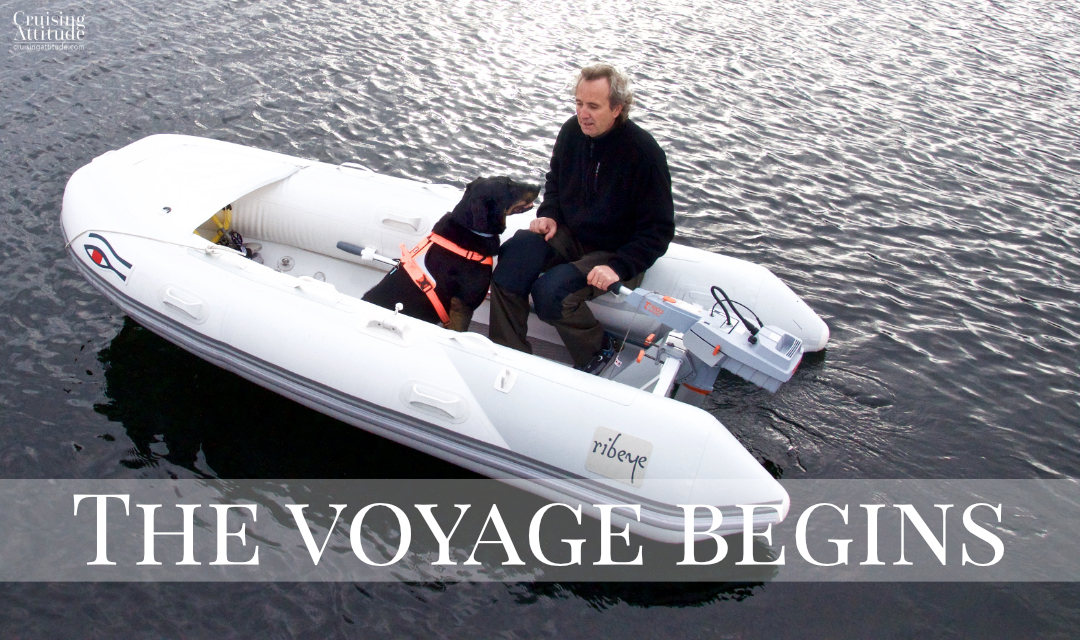 Freja was finally ready to go.  Small repairs finished, hull polished, water tanks filled and galley provisioned.  We took advantage of having our car by buying more heavy items than we really needed at the moment (anything that comes in a jar or can).  We also drove to a big garden center to get some planks for Carl to make our fender boards.  We bought two “deck” planks – the ones you’d use to make a deck or a terrace.  They’re supposed to last about 10 years of normal “deck use” and are already treated for humidity ingress.  All Carl needed to do was to drill some holes, round off the corners and sand them a bit.

We decided to make the very first leg of our journey a short one, so that Senna, our dog, could slowly become accustomed to  the movement and heeling of the boat.  We chose a beautiful anchorage only 2 hours’ sail from Vindön, just before the port of Ellös.

We plan to do longer and longer legs to get her used to sailing.  Our limit will be 6-7 hours.  She can “hold it” that long.  We do have a small rug made of artificial grass that she can use, but she hasn’t had to yet.  Her first trip in the dingy to get to land was a big success.  She loved it! 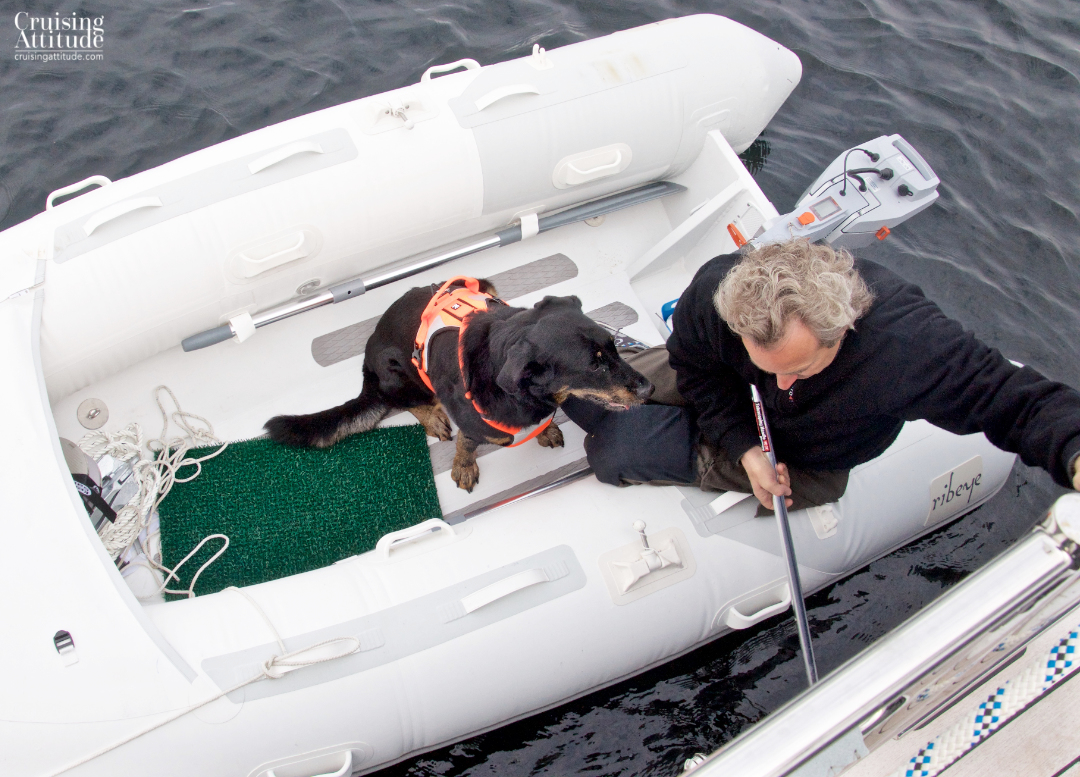 Senna jumped right into the dingy from the stern stairs.

Our second leg ended at Mollösund, an incredibly charming fishing/summer cottage village with a small marina.  It’s worth the time getting there early or staying an extra night.  If you like seafood, you must walk over to Larssons Fisk (fisk=fish).  We bought some salmon and plaice almost right off the boat (the shop opens right after the fishing boat docks and unloads the daily catch).  They also have the most fantastic shrimp mix that they call “Mums”, which means “Yum”. And it is indeed yummy.  It’s the most delicious variation of “Skagen Röra” I’ve ever tasted. It even beats the one sold at Lisa Elmqvist at Östermalmshallen in Stockholm, for those of you who know Stockholm and that  famous seafood shop and restaurant. 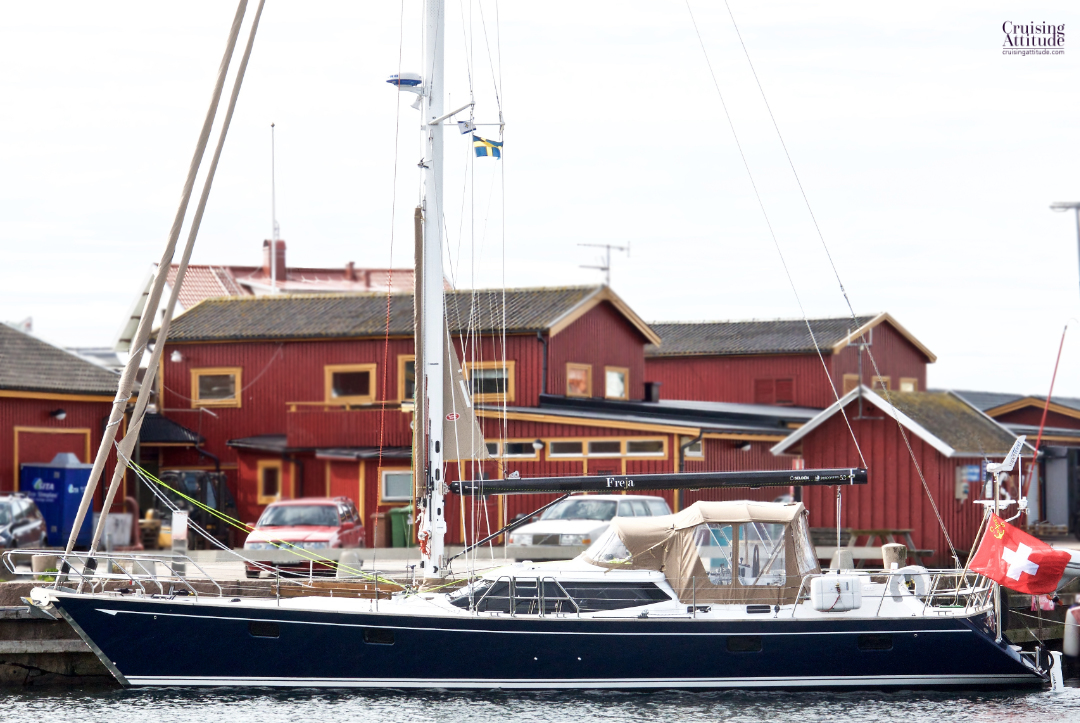 Freja docked in front of the “fish processing” building in Mollösund. 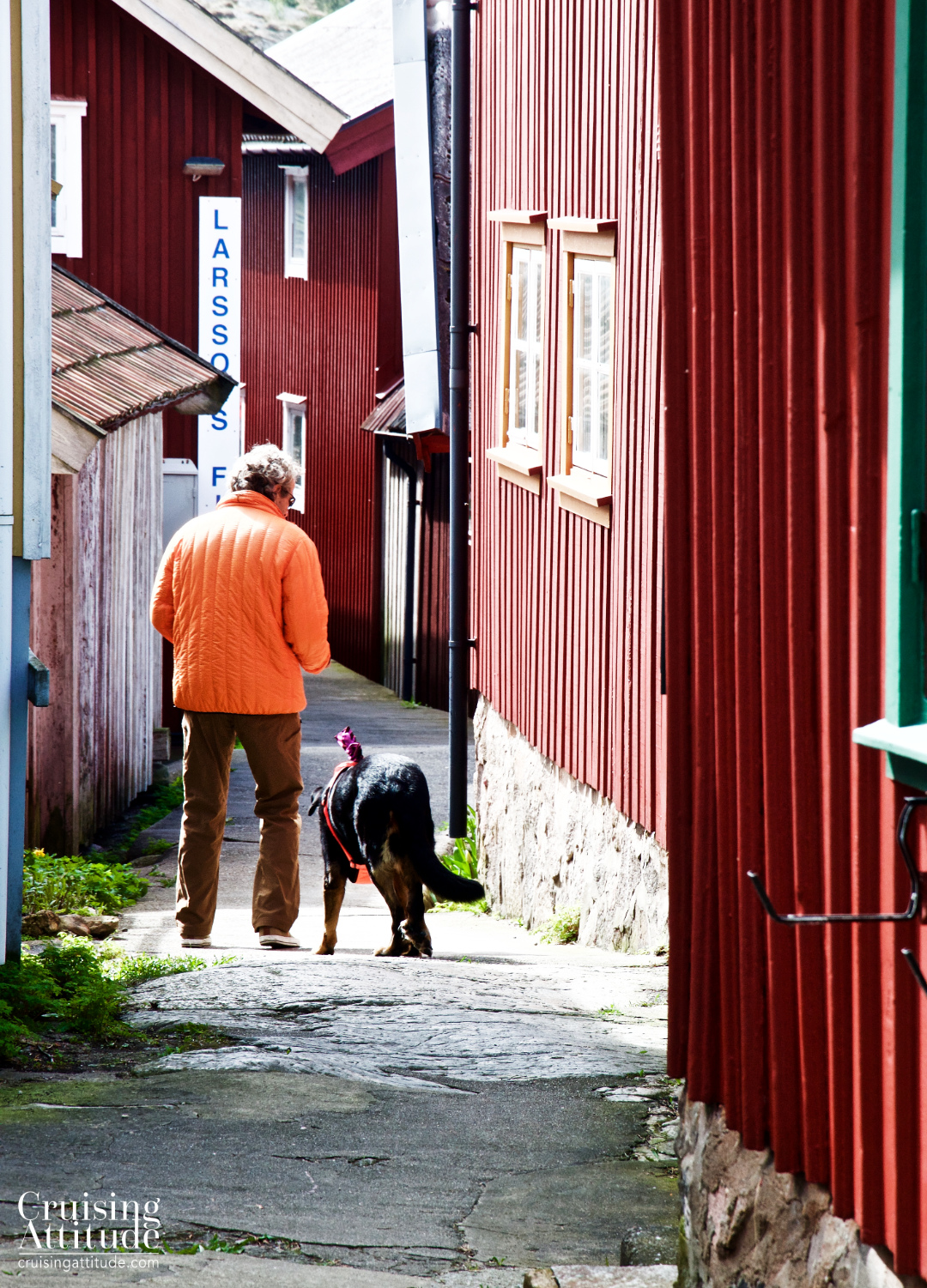 On the way to Larssons Fisk 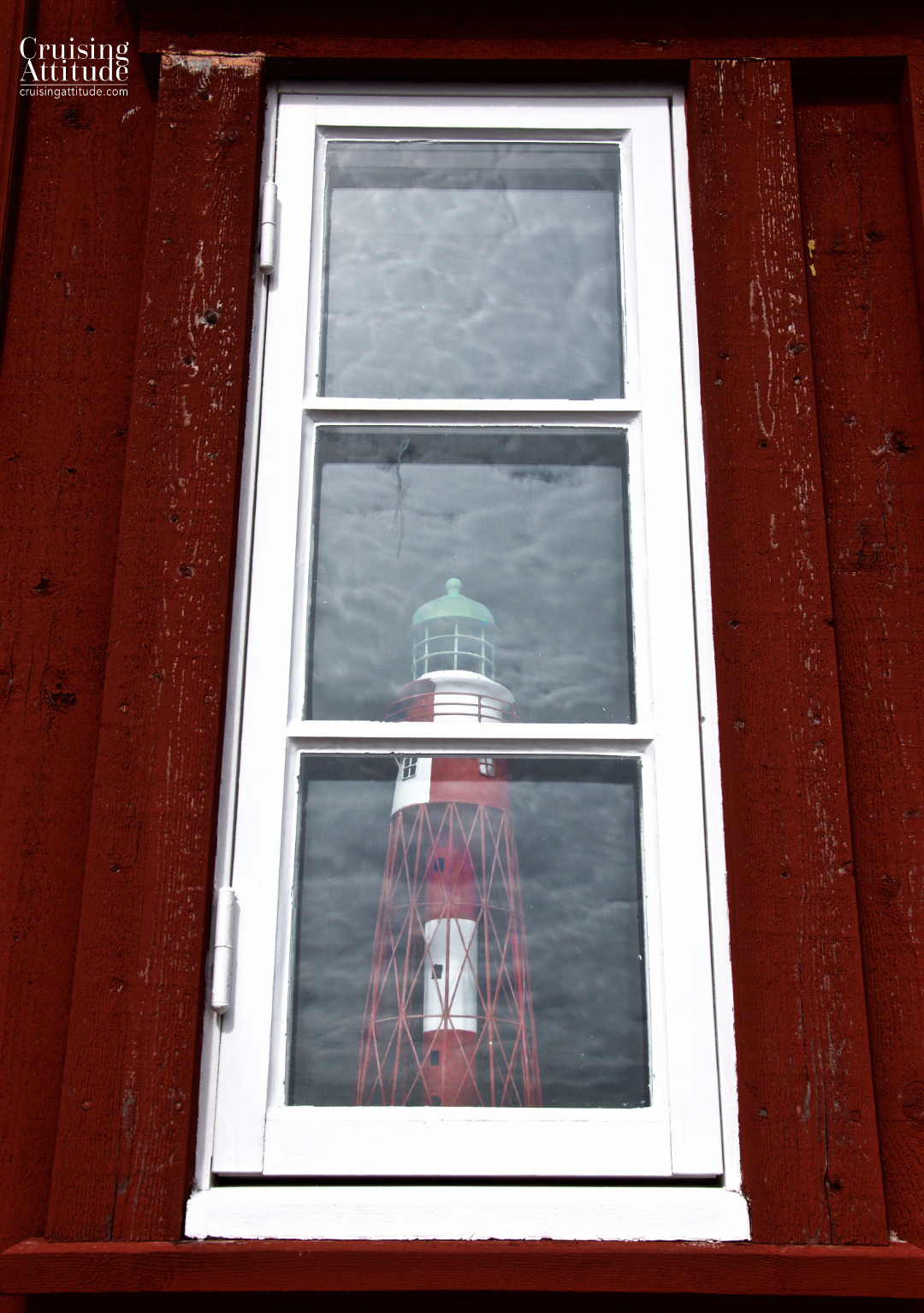 A window in the village of Mollösund 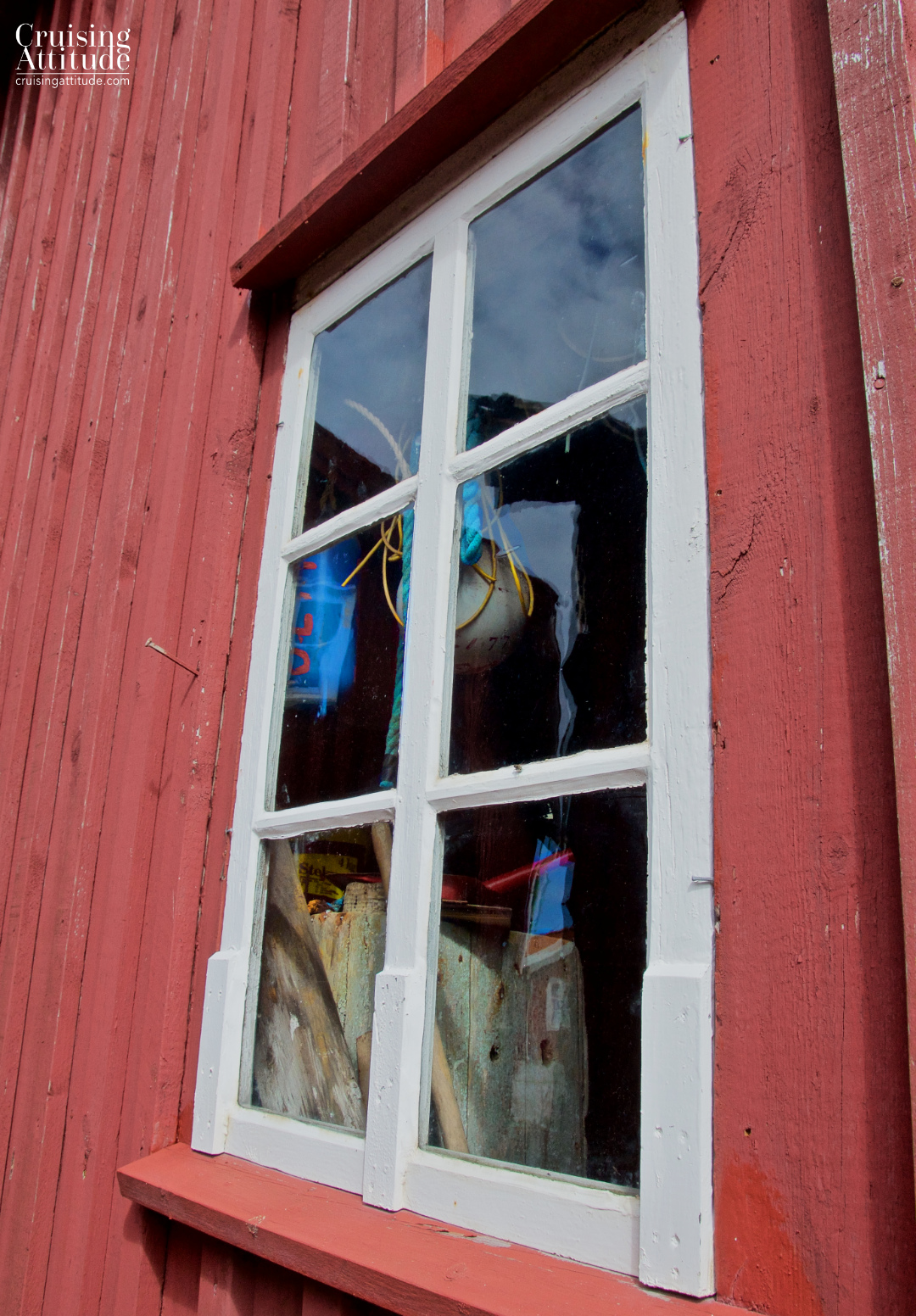 Looking into the window of a fishing cabin. Mollösund, Sweden 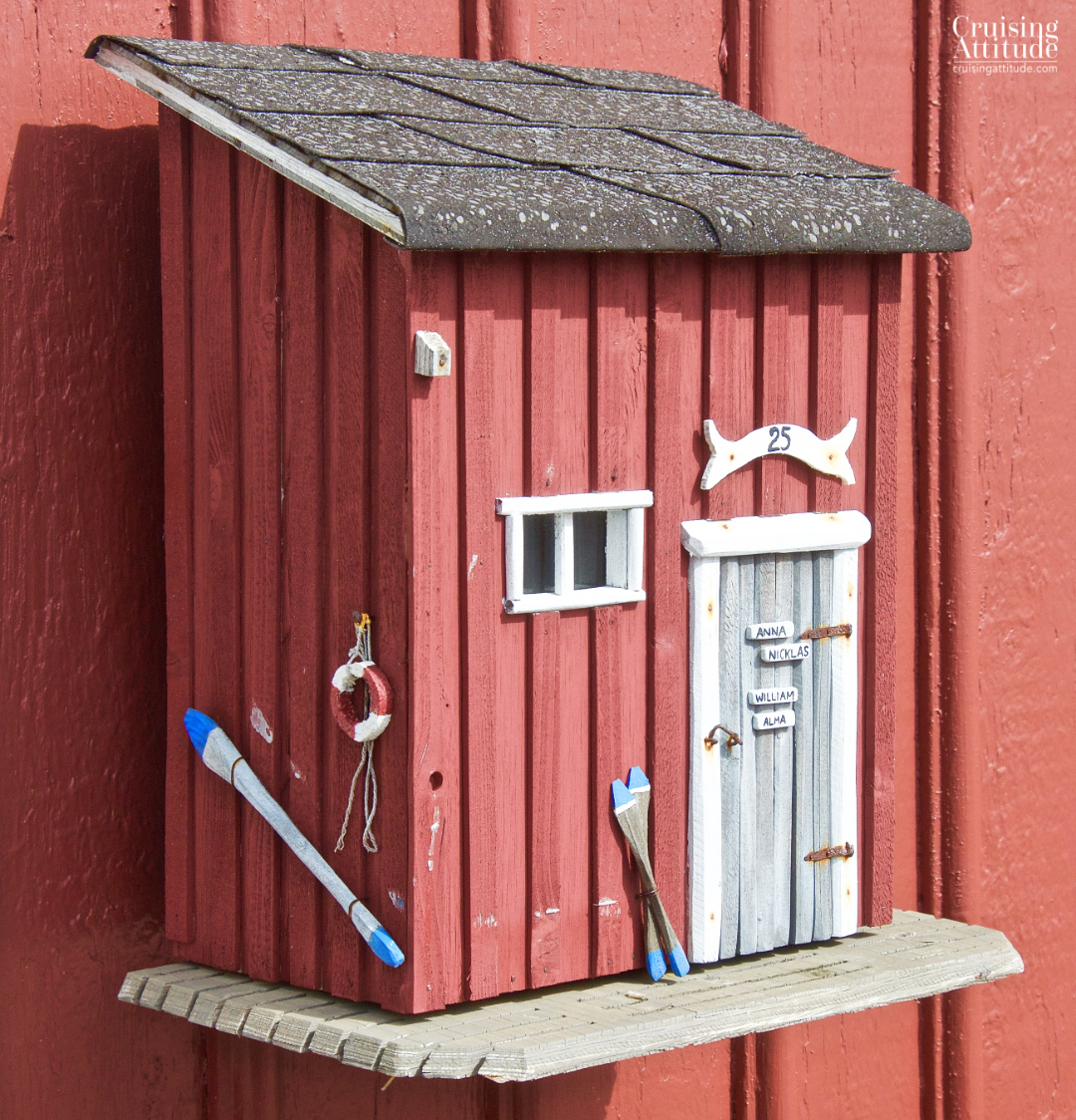 A lovely mailbox in the village of Mollösund, Sweden 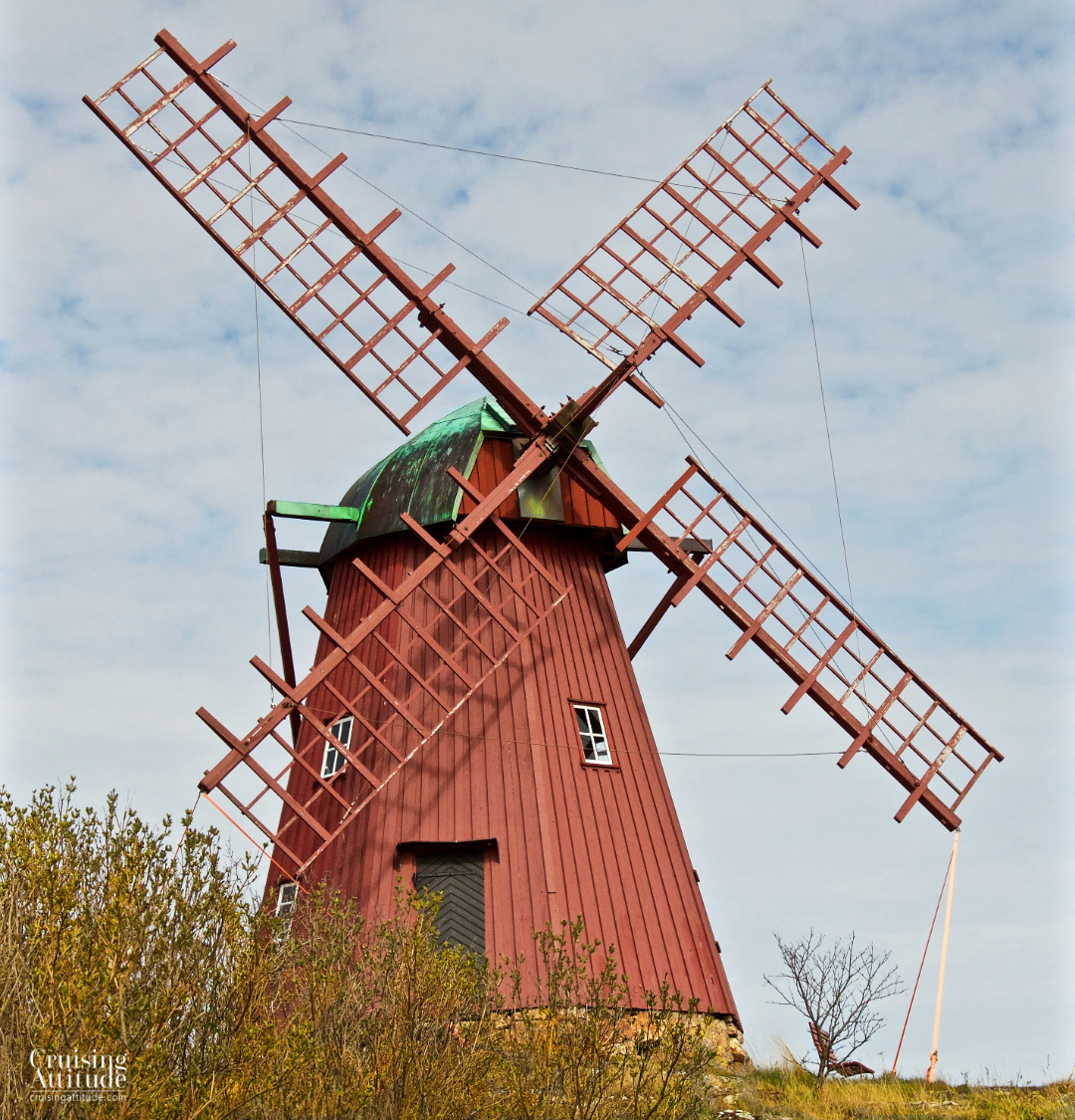 The old windmill in Mollösund 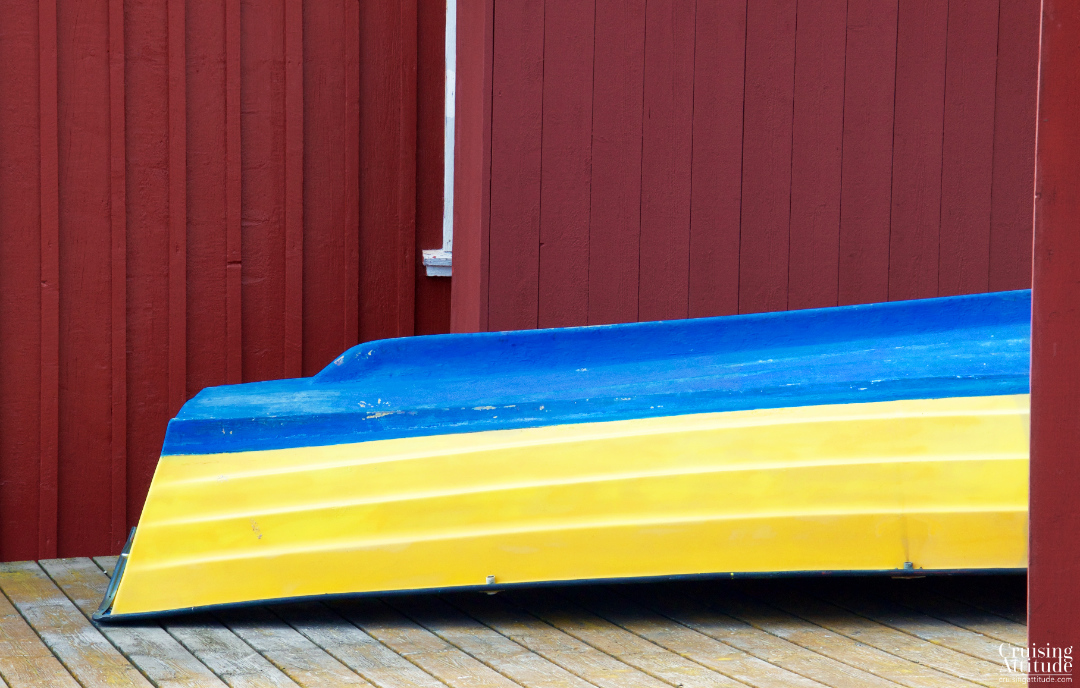 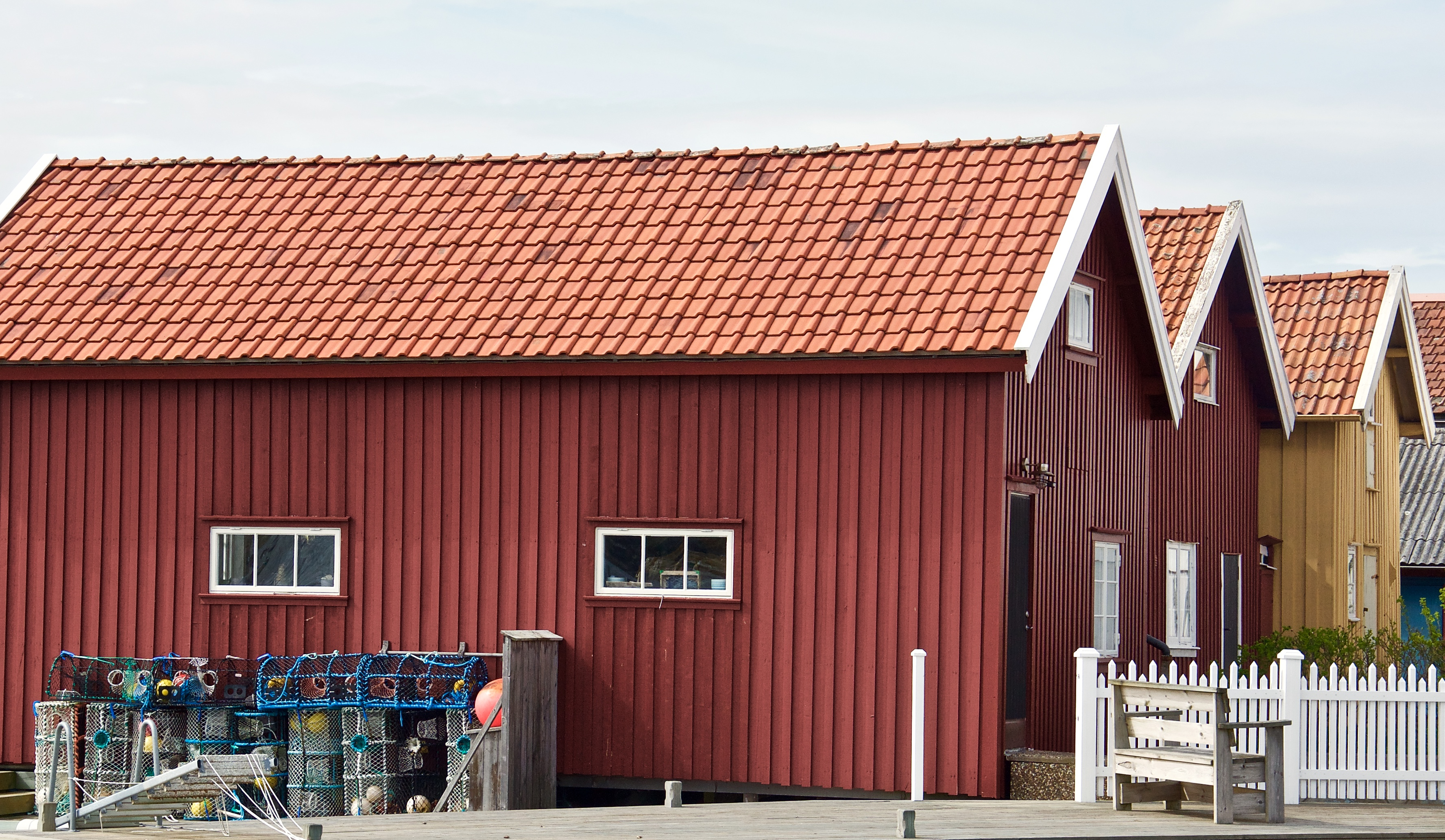 Typical “fishing cottages” in Mollösund. Many have been converted into summer cottages.

The marina in Mollösund is small, but if your boat is under 40 feet, you’ll be able to find a place unless it’s high season – the month of July.  Most Scandinavians are on holiday in July, so popular marinas are full by 14.00.  Some marinas accept reservations; otherwise you’ll have to get there early.  Needless to say, the beginning of May is not high season.  The electricity was not even turned on the marina, and not a single restaurant was open.  Mollösund does have a surprisingly well-stocked grocery store about a 2-minute walk from the marna, and two fresh fish shops.

Restaurants, cafés and bars surround the marina, but they don’t open until the beginning of June.  Diesel and gasoline is available at two different stations on either side of the marina entrance. 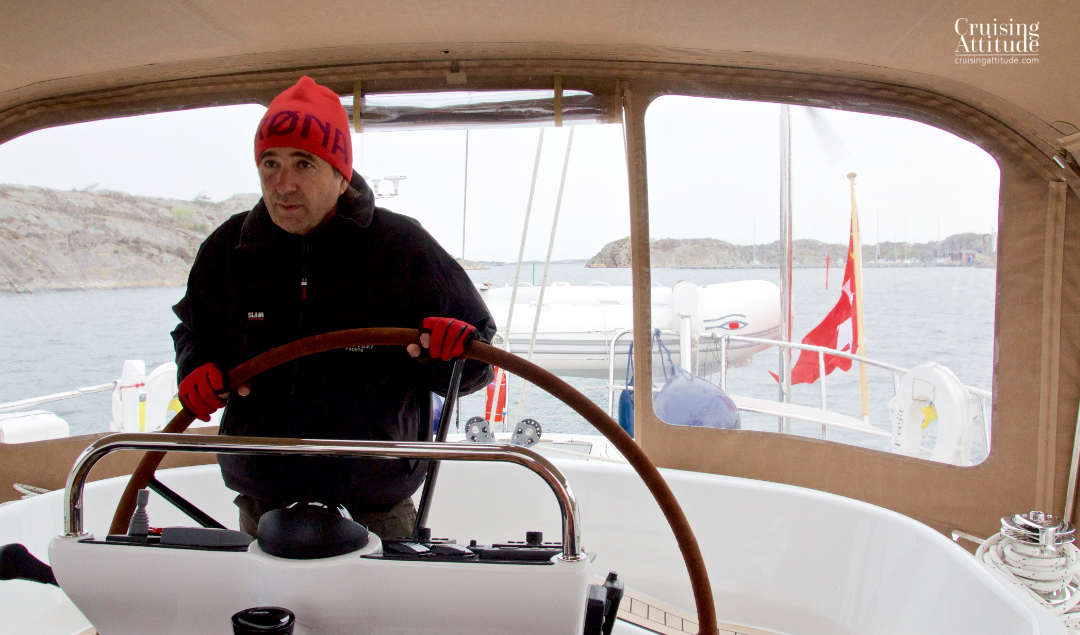 It’s cold on the west coast of Sweden in the beginning of May! You need to dress for winter sailing.