The winds were still coming out of the southwest  as we left the Marina Seaport IJmuiden — perfect for us as we were still on a north-northeast course. We would not change course significantly until we rounded the Fresian island of Terschelling. 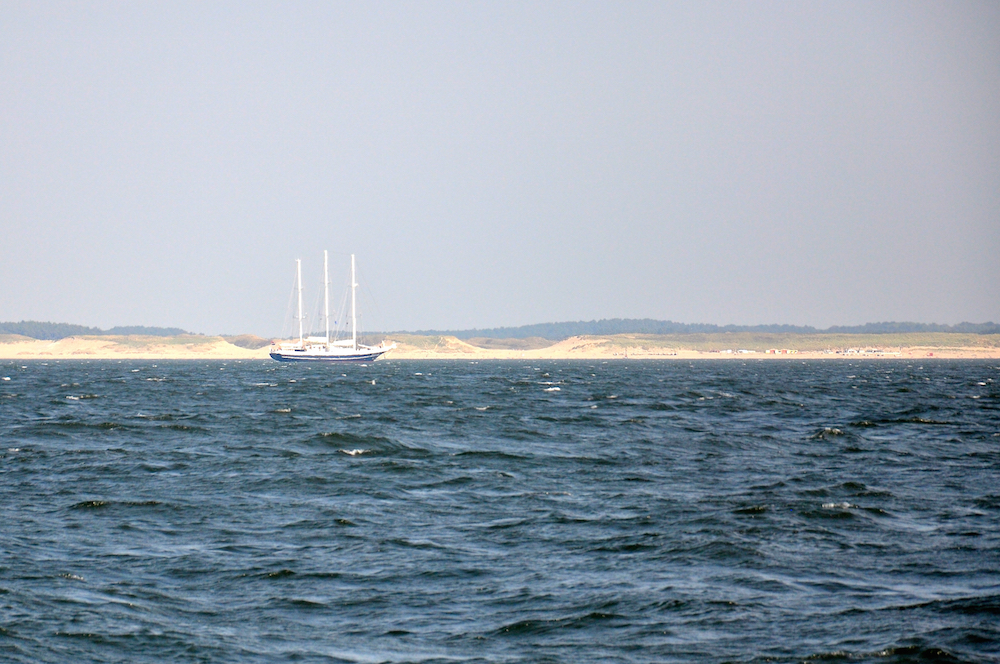 Barely out of the marina, we got our very first VHF call in Freja’s history — from the Netherlands Coast Guard.  Someone on one of the dunes onshore thought we were sending S.O.S. signals and they wanted to ask us if everything was OK. Had we had been signalling with a bright light?  No, we had not, thank you very much!  It was quite reassuring to get a call and realise that your LRC certificate training had not been forgotten.

An hour later, we had our second VHF call.  This time, they asked us very politely, how many people were onboard, who was onboard (two Swiss and two British nationals) what our last port of call was (IJmuiden) what our next port of call was (Cuxhaven) and then wished us good sailing.  We think it had been a training exercise for new coast guard recruits as we heard them calling another yacht not far from us afterwards.

We were now each on one-hour watches until 22.00 (sunset is about 22.30 at this time of the year where we were) when Liz and Mark would take the first 4-hour watch, and then Jacques and I would take the second at 2.00.  The thinking behind the watch assignment was that Mark and Liz seemed to be night owls and Jacques likes to be in bed early and wake up early.  Well, two o’clock is a bit early, mais voilà, that was our logic. 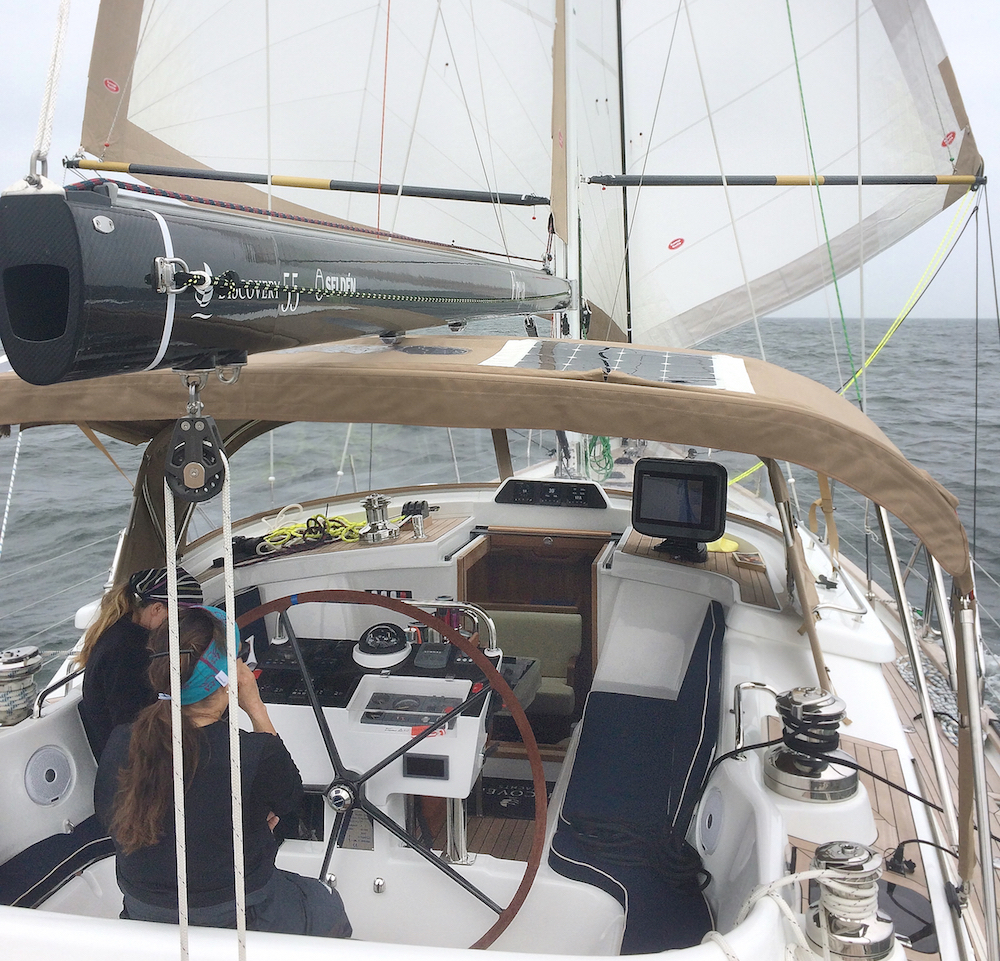 Cruising with both headsails poled out, main in.

Since we had the wind behind us, Mark thought it was a good idea to roll in the main and sail with the two headsails poled out until we got to Terschelling and changed to a more westerly course.  It worked brilliantly once both poles were out.  Our speed was about one knot faster and we didn’t have to worry about setting up the preventer. Here is a video of us sailing with poled out headsails.

Late in the afternoon, we reached Terschelling. We rolled in the genoa and rolled out the main as we were now on a broad reach.  A few hours later, the sunset into the north sea was magnificent. We had now passed the island of Schiermonnikoog, Mark and Liz started their watch, and we went to sleep. 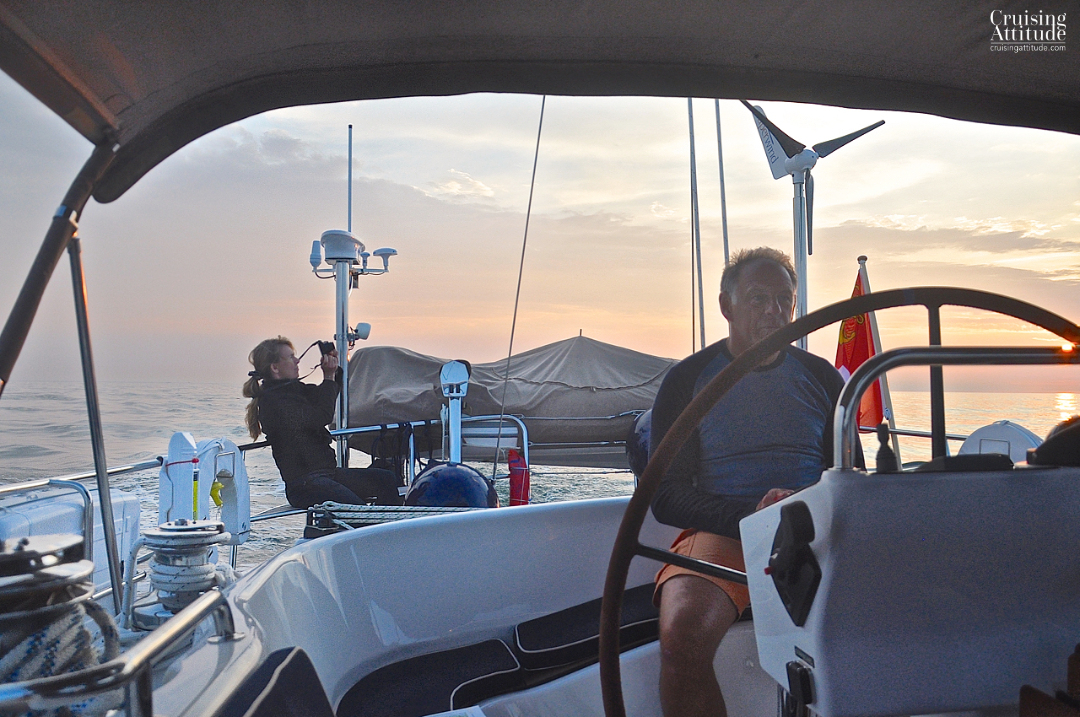 Both Liz and I were taking photos of the magnificent sunset. 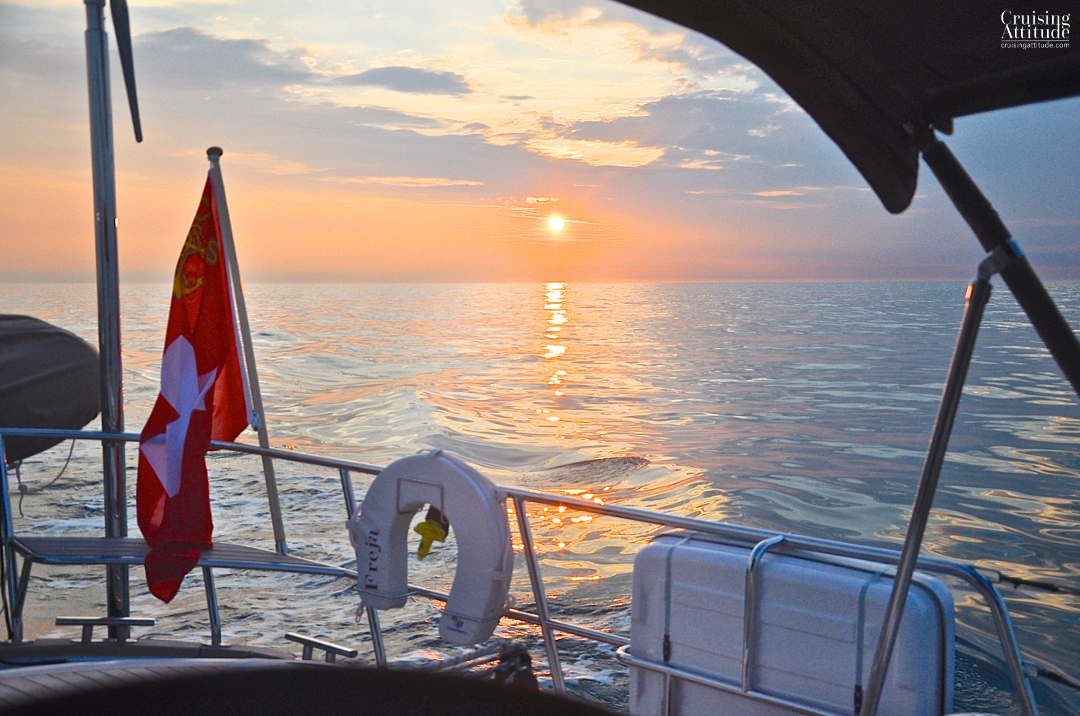 It’s difficult to believe this is the North Sea

We woke up from a not-so-deep sleep to the incredible spectacle of an electrical storm over our heads.  Fortunately, the lightning was far enough inland to not be a danger to us.  We never heard any thunder.  The amount of electricity being generated was just amazing as lightning illuminated the entire sky about every 20 seconds or so.  We saw all of the little fishing boats and a yacht in the distance that we had been monitoring with AIS and radar.  It was as though night and day were switching back and forth every 20 seconds.

We were now just north of the island of Langeoog in the German friesian islands.  Apart from the various fishing vessels we saw on the plotter, we had one yacht that kept us company as it steered a parallel course to ours.  The TSS was about 3 nautical miles north of us so we had an easy crossing to the bight of Bremerhaven at a speed over ground of 10 knots.  Since Bremerhaven is a large port, we had to be careful of the shipping channels and the enormous anchoring areas for the cargo ships.

The wind had also veered to an easterly direction and died down to just a couple of knots, forcing us to use the motor to properly cross the TSS.  We had three channels to cross using three different courses as they must be crossed at right angles.

After crossing the channels, the sea started to become visible. It was about 5.00 in the morning and we noticed that the first thing you notice when the day dawns is that you begin to actually see the surface of the water, even though the sky is totally black (we had no moon due to the clouds). It’s amazing how well the water reflects just a minuscule amount of light.

Just as the sun was appearing over the horizon through the clouds we came across an enormous anchoring area and had to slalom between the huge container ships. 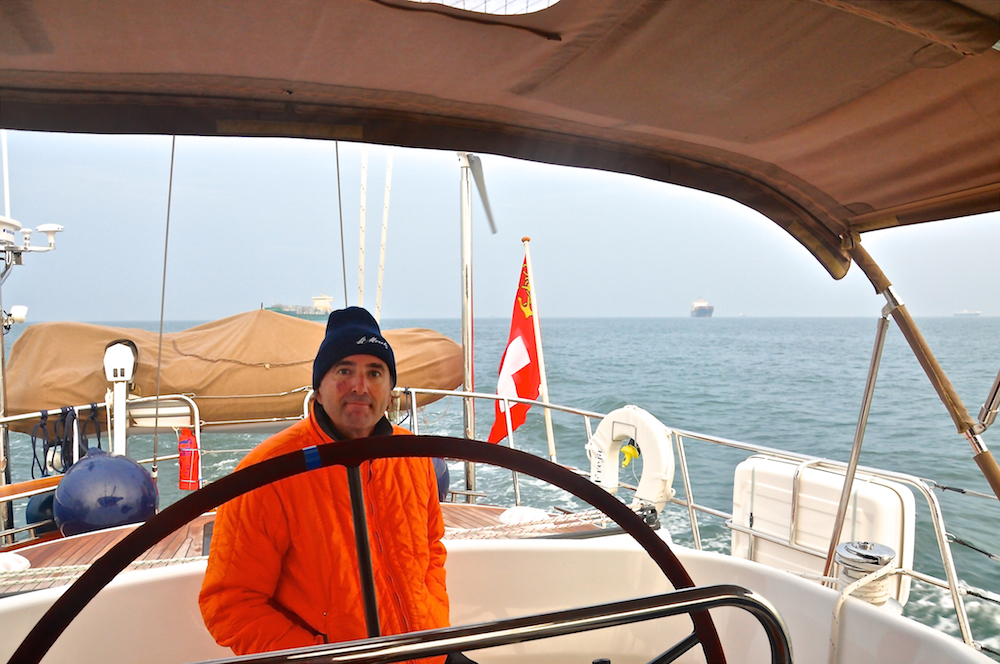 We finally reached the mouth of the Elbe at around 7.30 and woke Liz and Mark for breakfast.  We still had about 30 NM to go before arriving at Brunsbüttel at the entrance to the Kiel Canal. 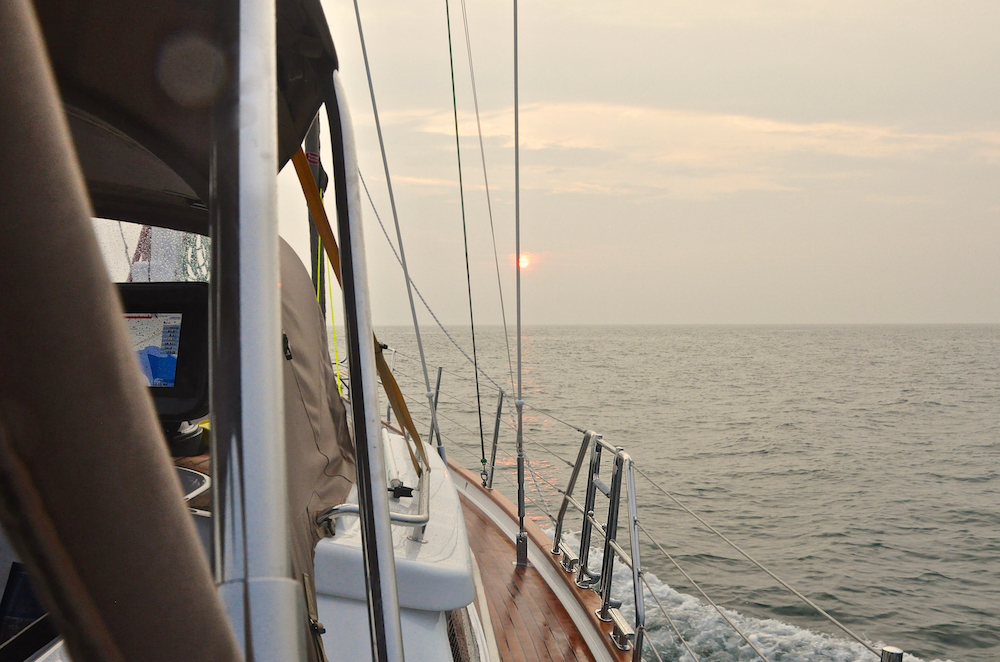 Freja approaching the mouth of the Elbe River in Germany.

Day 5: Elbe River to Rendsburg in the Kiel Canal

The mouth of the Elbe is so wide that you don’t see from one end to the other, at least not at high tide.  We arrived at high tide, which was unfortunate because that meant we were fighting both the natural river current as well as the tidal current emptying out of the river, which was about 5 knots.  With the motor at 2,300 RPM we managed a decent 5 knots.

We motored past Cuxhaven marina, where we had planned to spend the night, but as we had arrived about 7 hours earlier than planned, we pushed on to Brunsbüttel to begin the journey up the Kiel canal. We’ll save Cuxhaven and Hamburg för another cruise.  After about a 30-minute wait, the lights for permission to enter flashed and the lock doors were opened. We entered after a couple of local boats, thinking “we’ll just do what they do”, as none of us had ever done the Kiel Canal before! 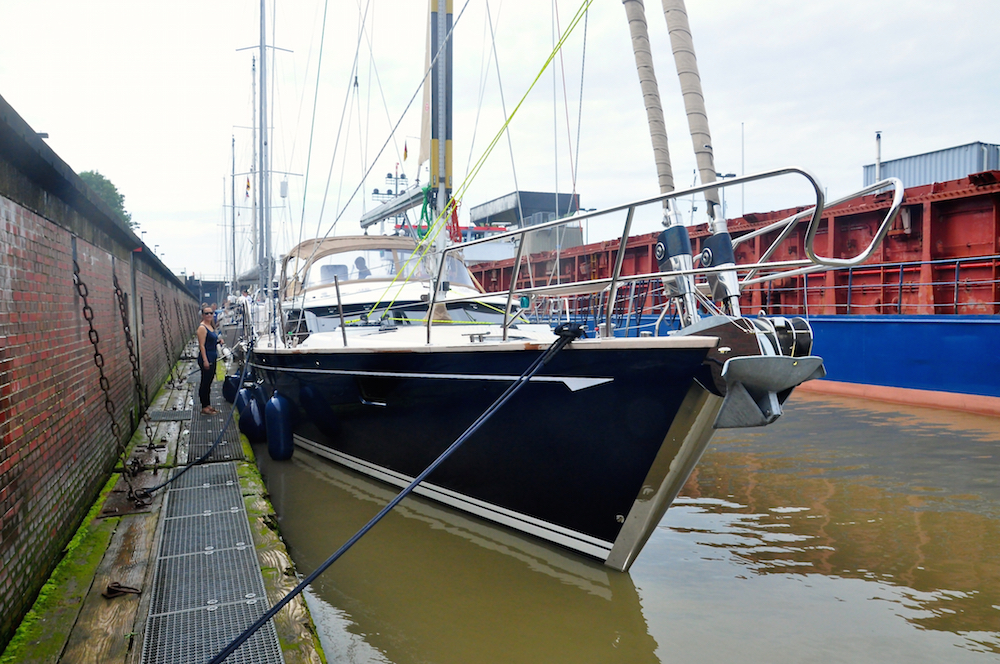 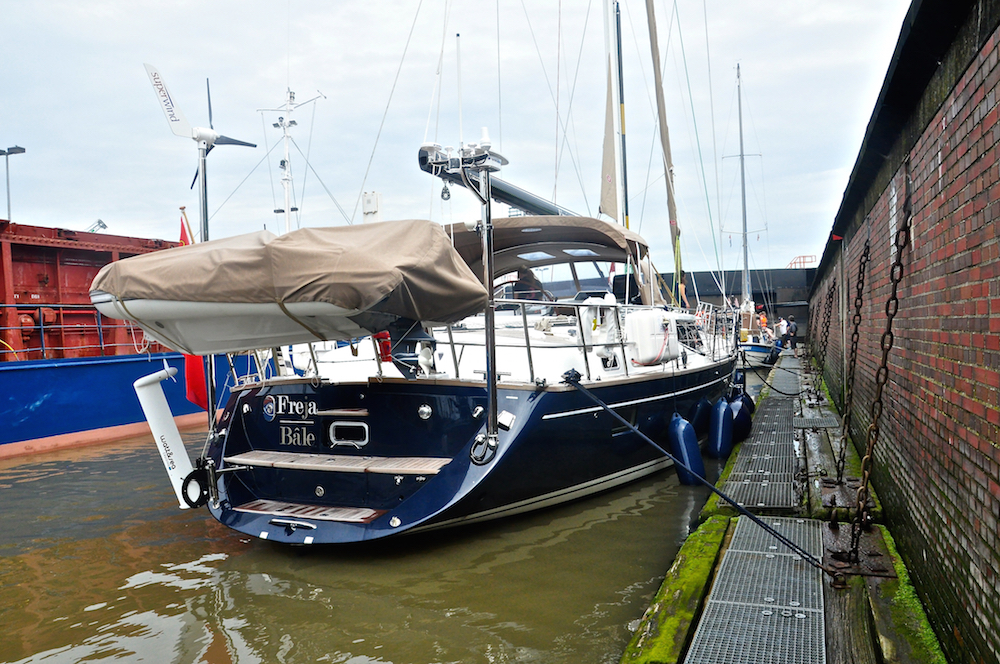 Freja in the locks at Brunsbüttel

One thing we were not prepared for was how ridiculously low the lock pontoon is. They’re less than 10 cm (4 inches) high!  We had hung our fenders at a “normal” pontoon height and had to quickly lower them to “floating in the water” height.  The next time, we plan to have a couple of fender boards because we noticed that fenders are seriously not effective if they’re floating in the water!  They pop out of the water because of the slippery algae that grows on the pontoons.  Fender boards will be one of our winter projects. 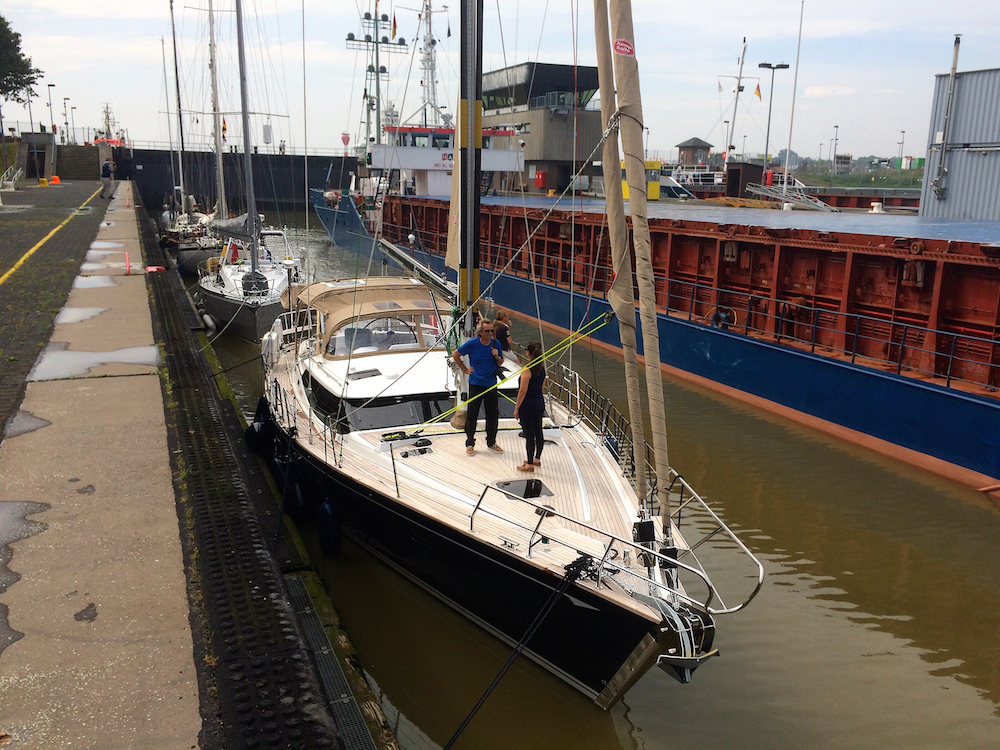 Freja tied up in the Brunsbüttel locks 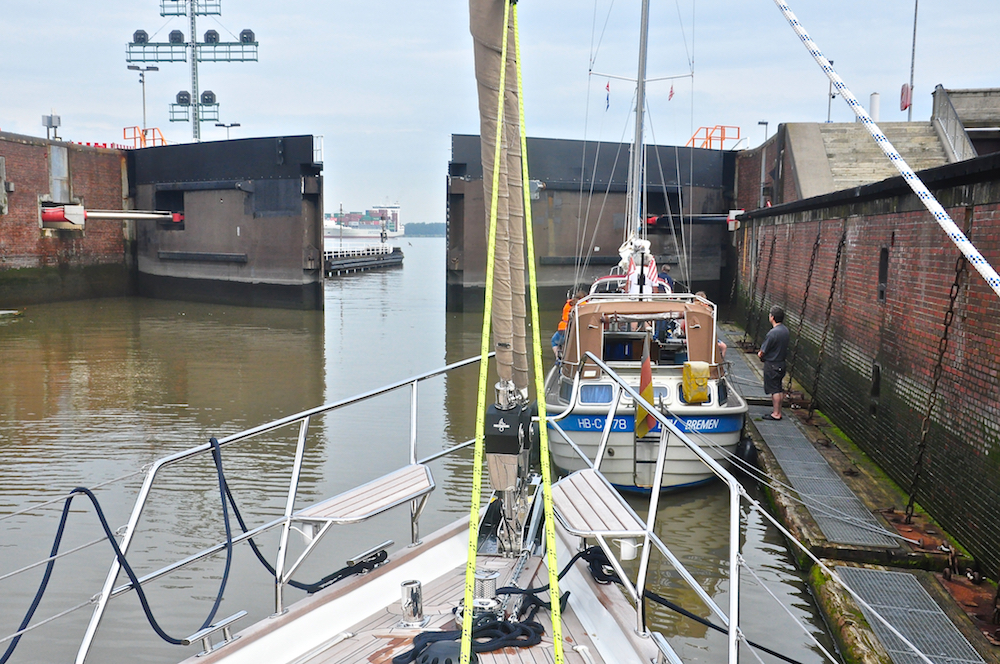 The lock gates opening for passage into the canal

The water level didn’t really change much while we in the lock, so the locking process after the gates were closed was rather uneventful.  The forward gate opened and we immediately saw a large cruise ship heading our way.  Thankfully we had needed to pass that one going in the opposite direction! 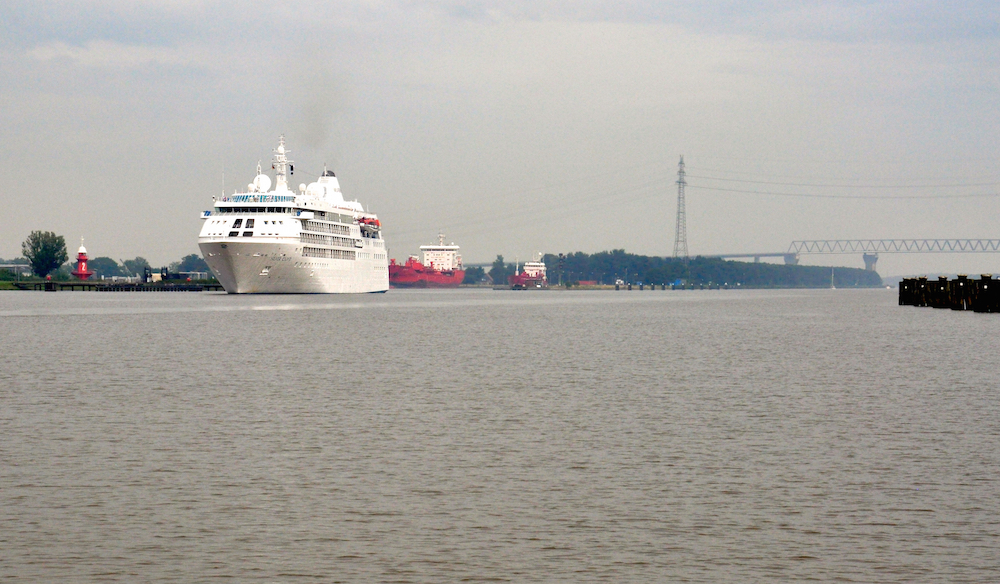 The Kiel canal at Brunsbüttel

We found the canal landscape to be rather charming.  We passed village after village, ferry landing after ferry landing.  The amusing thing about the ferry landings is that they all have a pub and an ice cream shop.  Mark, typical Englishman that he is, was groaning about not being able to stop for a pint at the pubs. 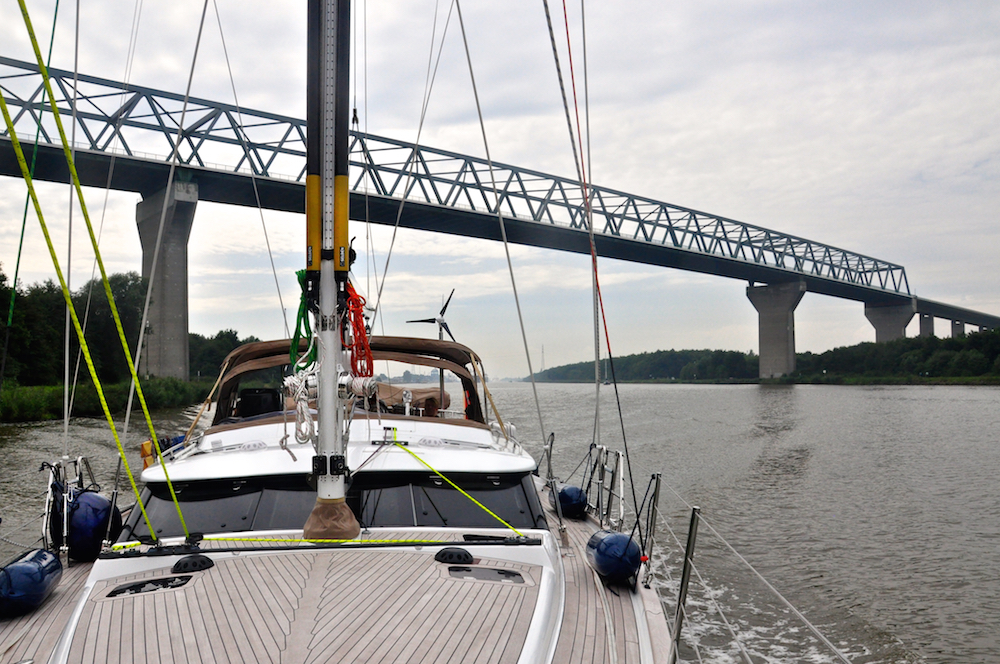 Making our way up the Kiel Canal 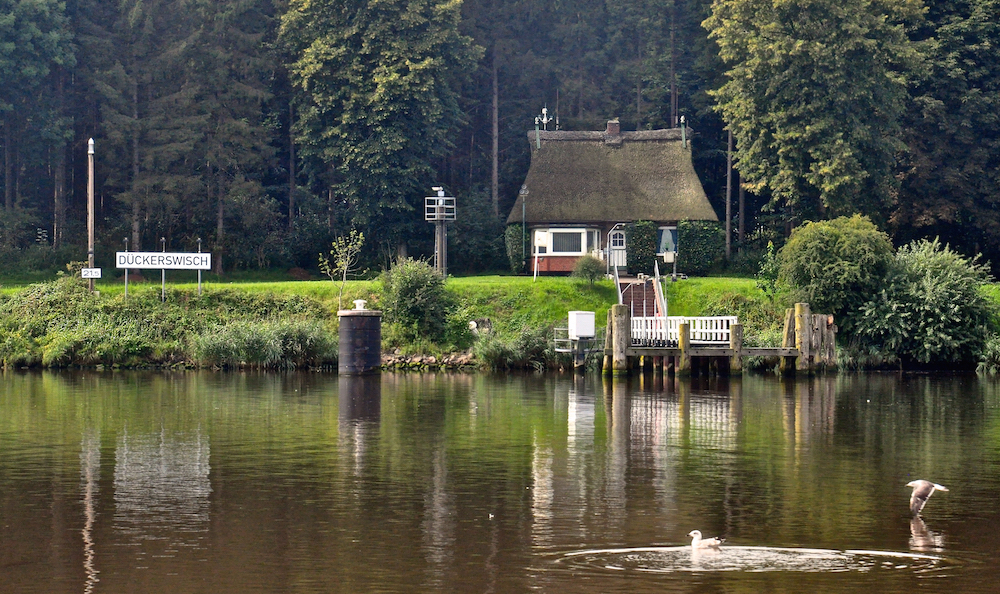 One of the many charming houses along the Kiel canal 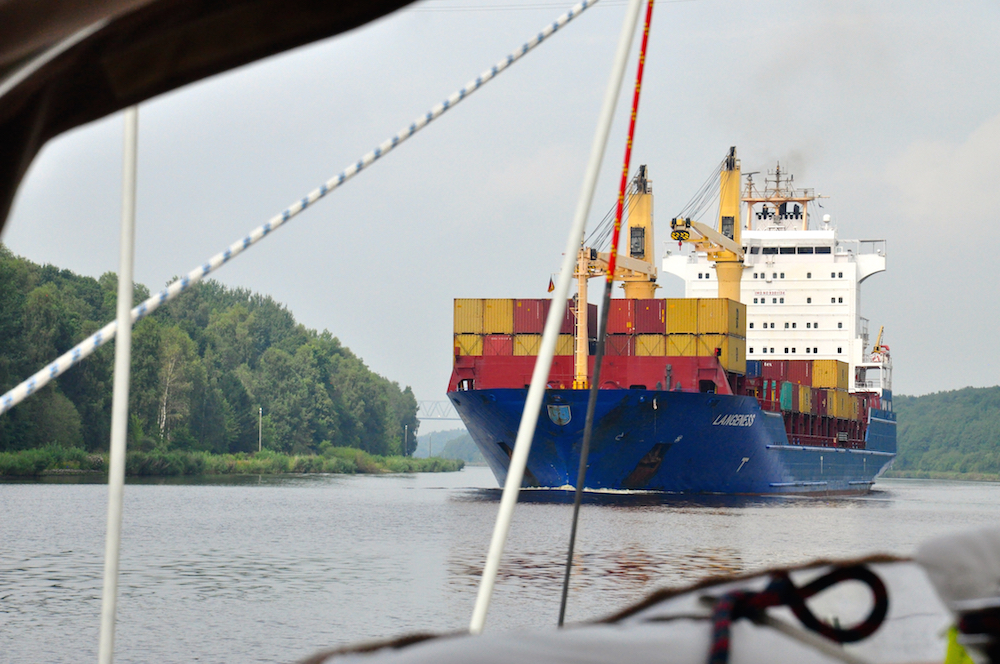 One of the many cargo ships transitting the canal. The speed limit in the canal is 8 knots.

We arrived at the harbour of Rendsburg, just after the halfway point of the canal.  Rendsburg  has three different marinas and we chose the marina at the very heart of town.  After being helped to a nice hammerhead mooring, I went to pay the marina fee — only 20 Euros for our 55-foot boat (prices start at 10 Euros for a boat 8 meters and below).

A Google Earth photo of Rendsburg. The three marinas are clearly visible.

It had been a hot, humid and hazy day, so we weren’t surprised to see the build-up of cumulonimbus clouds on the horizon as the evening arrived. By 19.00, a thunderstorm bringing heavy rain arrived, so we were no longer very keen on plans to take a long walk around the town.

It was just as well — the marina has a lovely restaurant and covered terrace. We managed to get the last table – for six – as we’d met lovely couple from Hamburg, Germany, Heidi and Axel, on their way home from sailing in Denmark.  We all shared a hearty meal, laughs and great conversion and received an invitation to visit them in Hamburg.  The “cruising community” isn’t just a Caribbean thing!

Diagram of the Regatta-Verein Rendsburg Marina