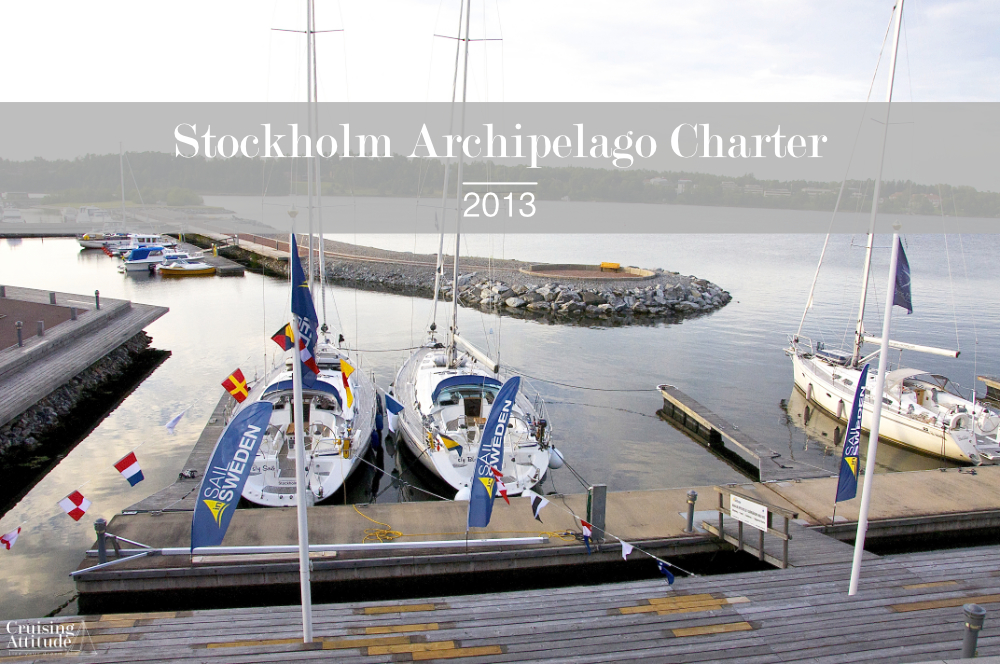 It was now August 2013, and we were in the midst of deciding which boat we were going decide upon. We thought a bit sailing in familiar waters would help us in the decision process.

It had been a long time since we last cruised  the Stockholm Archipelago — June, 1996 to be exact. We bareboat charted a Bavaria 40 from Sail Sweden, based in Gåshaga on Lidingö, a short distance from Stockholm.  Lidingö is the island on which I lived back in the late 80’s to early 90’s.

We first stopped at the Östermalmshallen (a wonderful food market in Stockholm) to buy some Skagenröra (Danish/Swedish shrimp salad) and Kräftröra (crayfish salad) at Lisa Elmqvist  and a few other items such as Västerbotten (the tastiest Swedish cheese) at Husmans Deli.   If you’re in Stockholm, you must go to Östermalmshallen! Click here for an image of this treasure from the 1800’s.

The second stop was the ICA supermarket in Larsberg, which has an amazing selection of high-quality food, including a great selection of organics. This was the supermarket I used to go to back in the 80’s and it was not at all like this!

We finally arrived at the marina and were welcomed onto the boat and given time to organise our shopping and our baggage. We then went through the functional, safety and security aspects of the boat with one of the owners of the charter company. When you charter a boat, it’s important to ask where all of the safety and security items are stored – sometimes it’s not the most logical area!  It’s also a good idea to ask how the VHF works if you’re not familiar with the brand that’s installed on the boat.

By the time all of the preliminaries were dealt with, it was around six-thirty.  We were exhausted, having driven up from Helsingborg the same morning (about a 6-hour drive), so we thought it best to get some rest and start early tomorrow.

The day dawned a bit grey and misty, a disappointment after yesterday’s fabulous sunshine, but we left our mooring with a strong sense of excitement, eager to rediscover this fantastic sailing area.  Tillbaks i skärgården! Back in the archipelago!

The Stockholm archipelago has over 30,000 islands and many more rocks and shoals making it a difficult place to navigate, if you’re not accustomed to always checking your chart. Fortunately, there are no tides, so the depth of these rocks doesn’t change in a dramatic way.  The water level does rise and fall with weather conditions, though, so be careful with strong high or low pressure conditions. A high pressure system will push the water level down and out of the Baltic via Denmark, and a low will allow more water to flow into the Baltic, raising the water levels.  I’ve seen differences of around almost a meter. 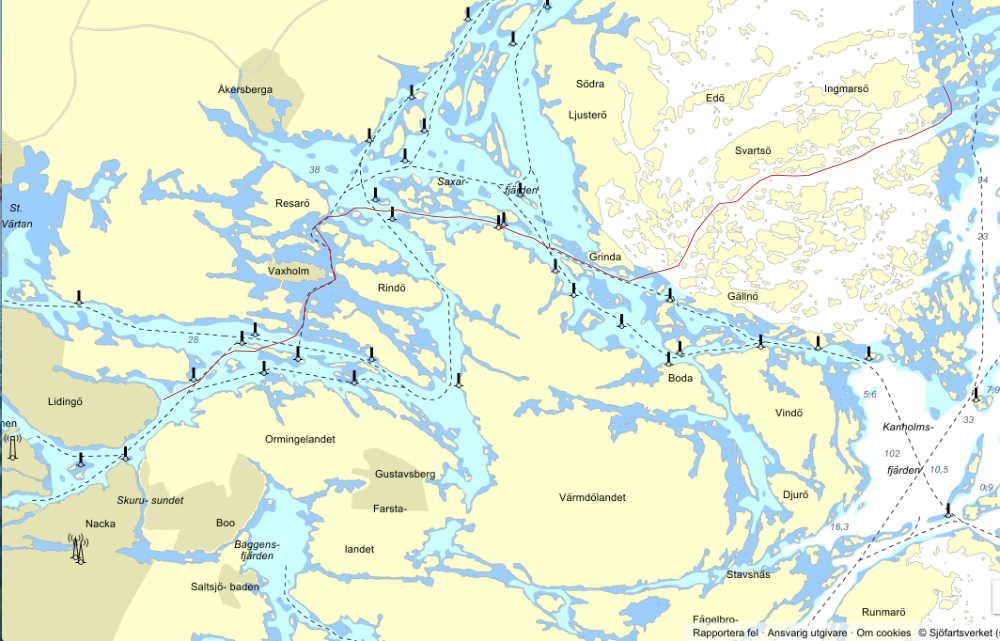 Our route to paradiset

Our route took us past Waxholm, with its 16th century fortress, through Lindalsundet, past Grinda island, and finally to the well-known anchorage of Paradiset.  We enjoyed a lovely afternoon with a glass of our own Chardonnay on the low granite cliffs in front of the boat. 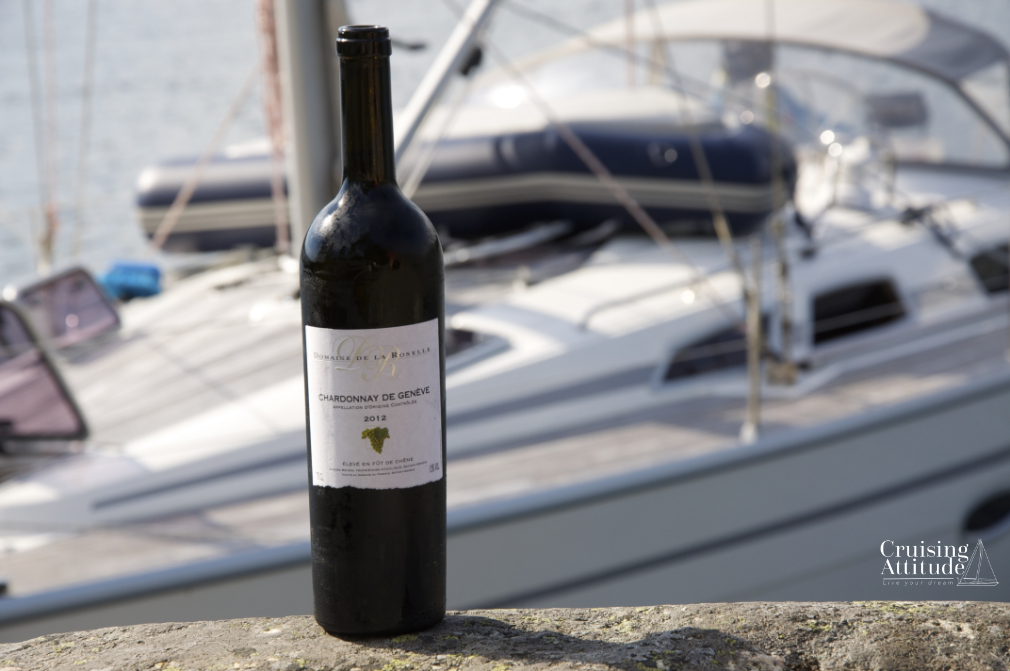 Enjoying a glass of our own wine, a chardonnay from Domaine de la Roselle, at Paradiset. 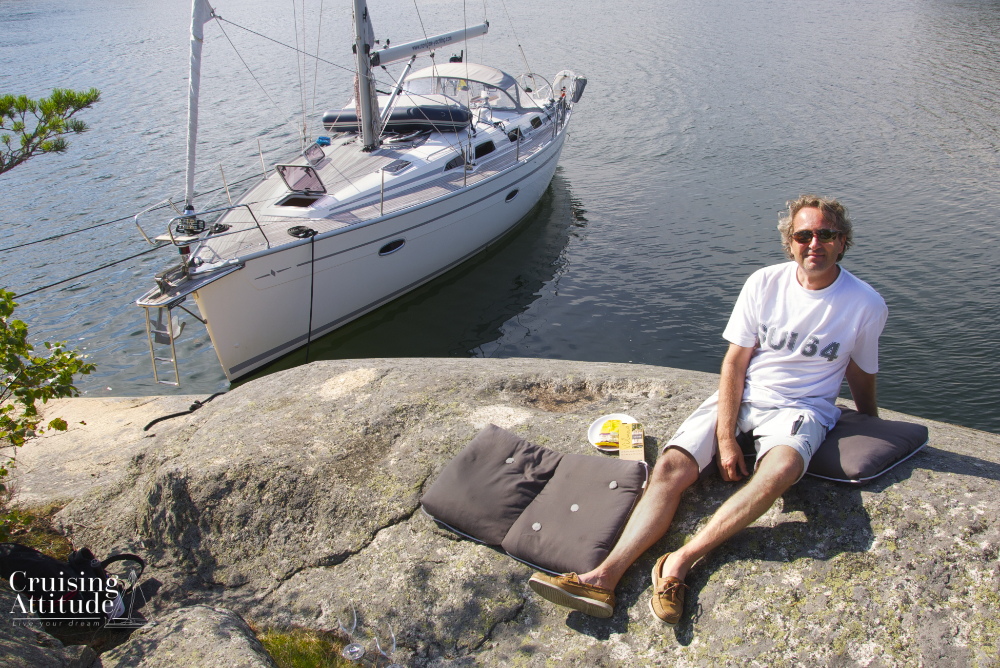 The perfect anchorage on a perfect day. 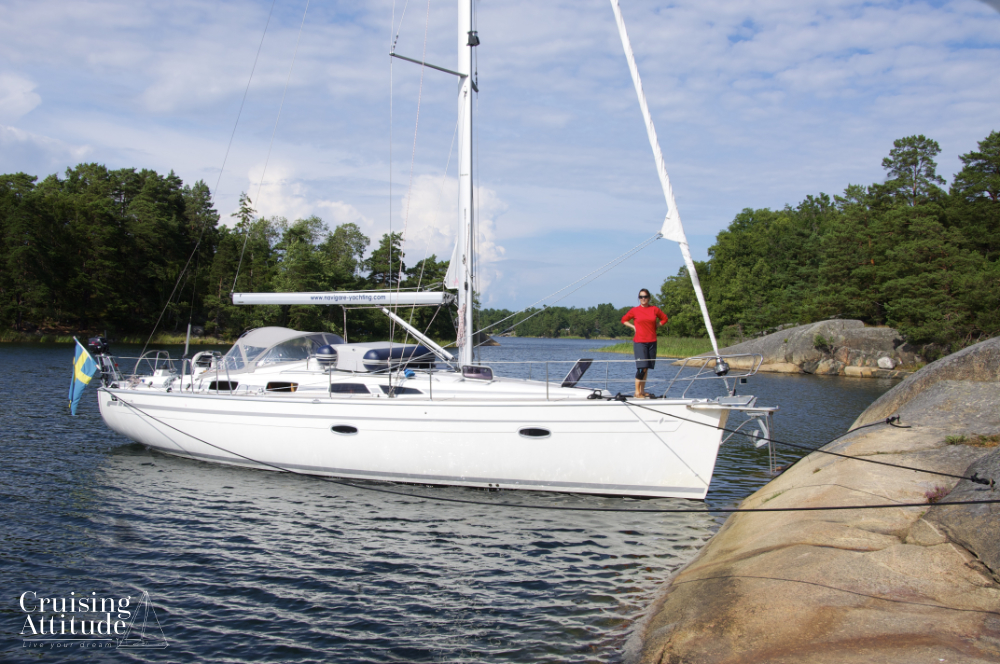 Paradiset in the Stockholm Archipelago 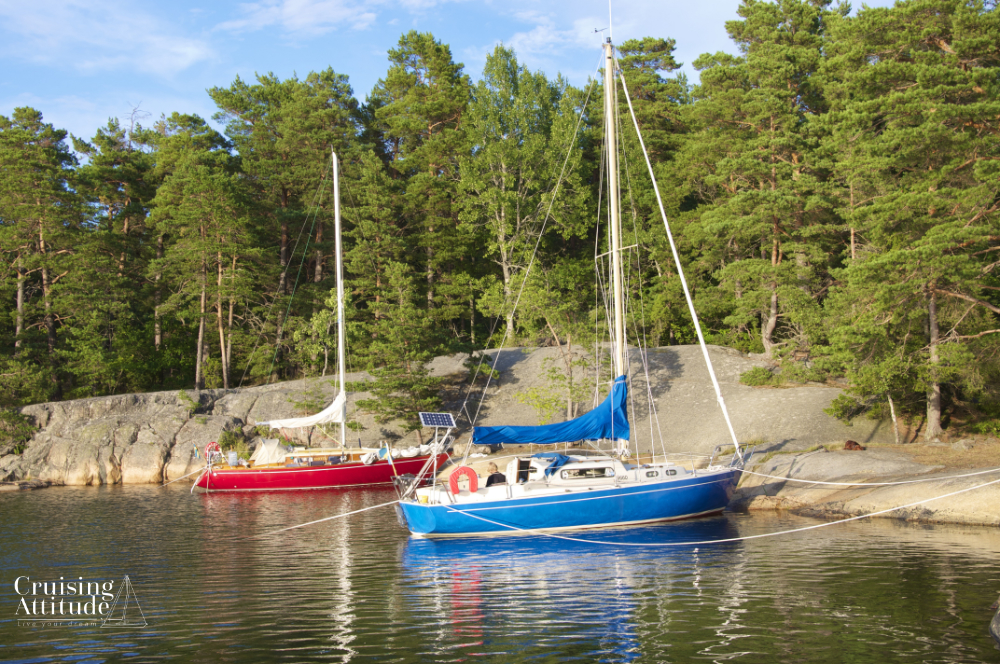 Our neighbours at Paradiset

We ended up on Gräddö because of a genoa failure. We had intended to sail farther north to Arholma, when suddenly, the leading edge (luff) of the genoa ripped off the rest of sail. We were running with about 15 knots of wind – not exactly storm conditions.

We called the charter company, and they arranged for a sailmaker to be standing by when we returned to repair the sail.  We had an early dinner and bedtime at Gräddö because it would take us nearly the entire day to get back to Lidingö. 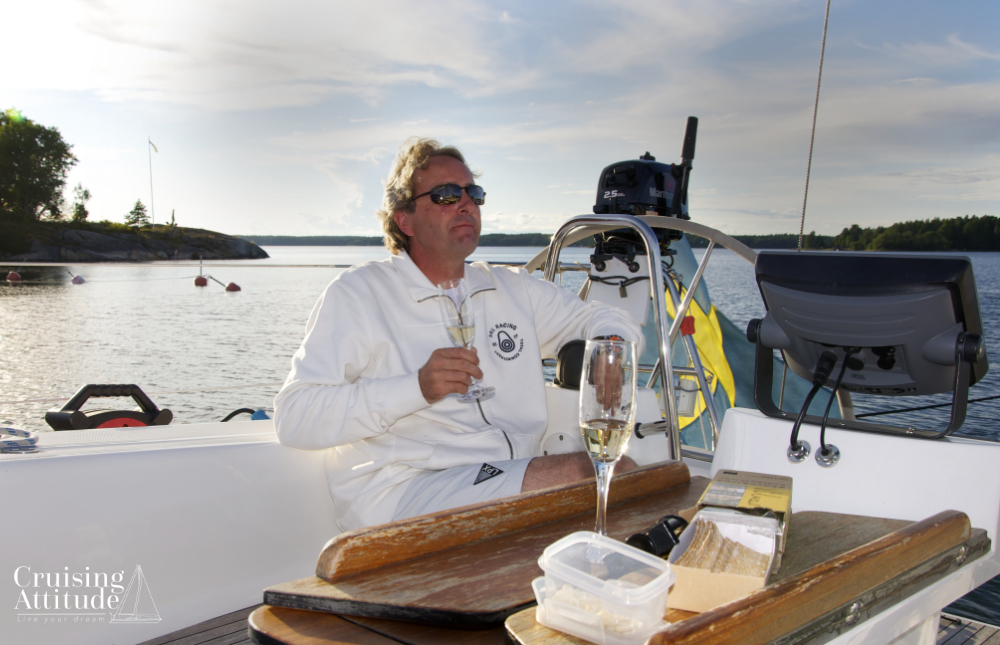 After having spend our entire third day, getting back to Lidingö, and half of our fourth day getting the sail repaired,  we finally got under way at about 15.00.  I decided that Napoleanviken on the nature reserve island of  Ägnö would be a good goal for the day.  It’s a favourite Friday night anchorage since it’s not far from Stockholm, it’s gorgeous, it’s quiet, and it has lots of room so you can find a place to anchor even if you arrive in the evening.

To get there, you need to pass through three different canals, the Skurusund, the Lännerstasund and the Baggenstäk.  It’s an interesting voyage with lots of fabulous houses lining the banks of the canals. 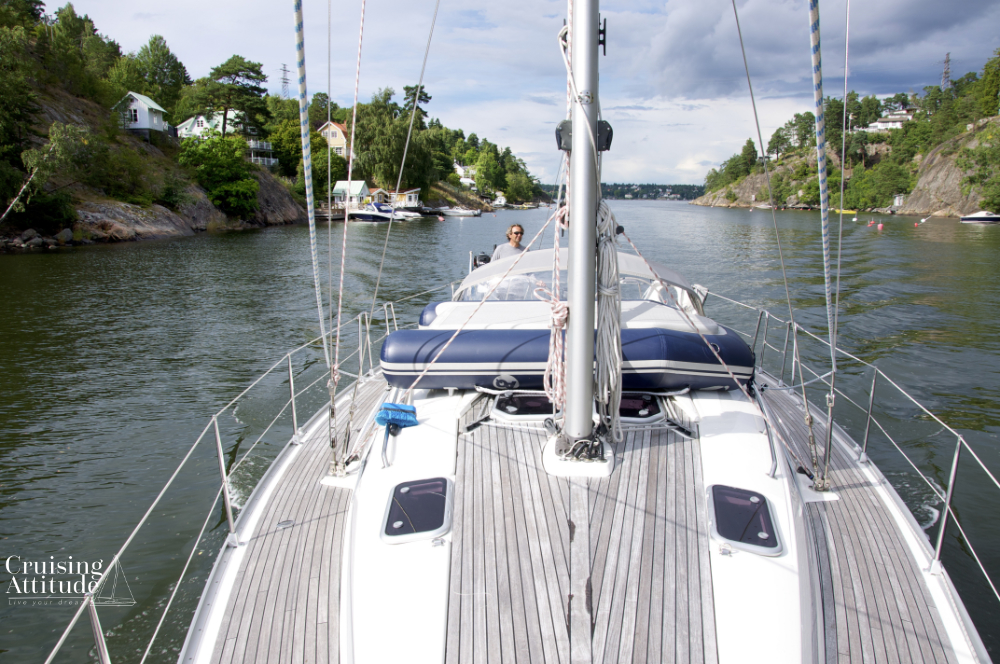 The first two canals are “normal-sized” —  most traffic can pass side by side with lots of room to spare.  The third, however, is really narrow.

If you meet one of the archipelago passenger  boats (boats that act as public transport for the island and coastal population) in one of the skinnier parts of the Baggenstäk, you may just have to back up to let them through.  You are required to go through the Skurusund and the Baggenstäk under motor if you have one.

This is the entrance when entering from the Stockholm side of the Baggenstäk canal. It’s quite narrow, and you don’t see what’s coming around the bend.

Before going through the Baggenstäk, keep your ears open to channel 16. Most of the bigger boats will warn other traffic they will be entering so you can take action to wait them out. They will also sound a warning before entering – one long whistle.  Don’t forget that passenger boats in regular traffic have priority over leisure boats.

One of the narrowest places in the “Baggenstäket” canal.

One of the many charming homes you see along the canal.

The sunny weather continued, and we had a leisurely breakfast in the cockpit with a pretty flock of ducks floating around the boat.  They know to stay close if they want something to eat.  We observed them paddling from boat to boat asking for donations. 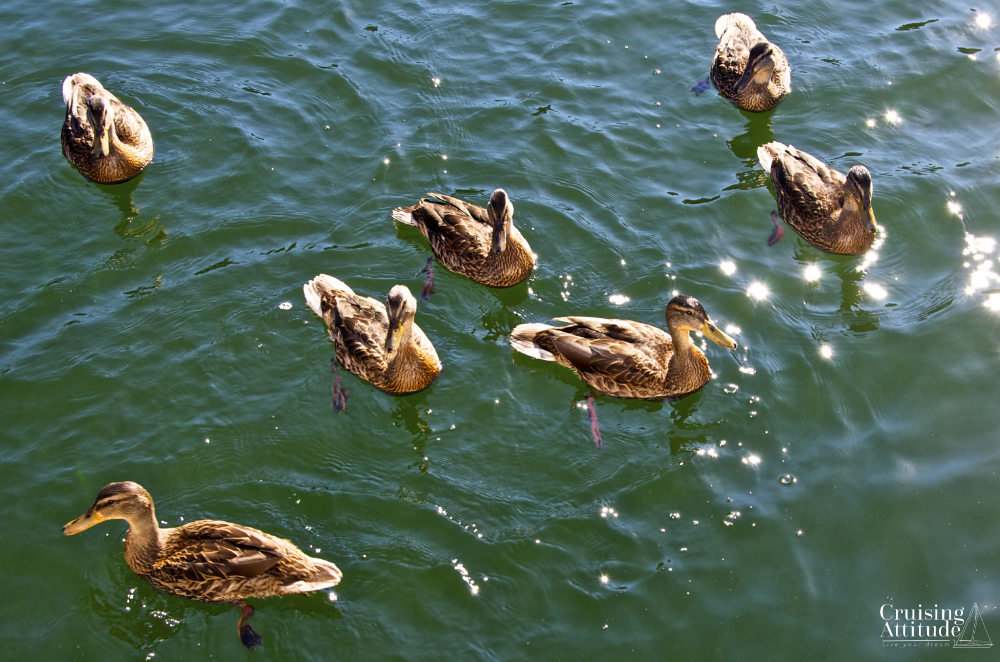 Company at breakfast time in the Napoleonviken. 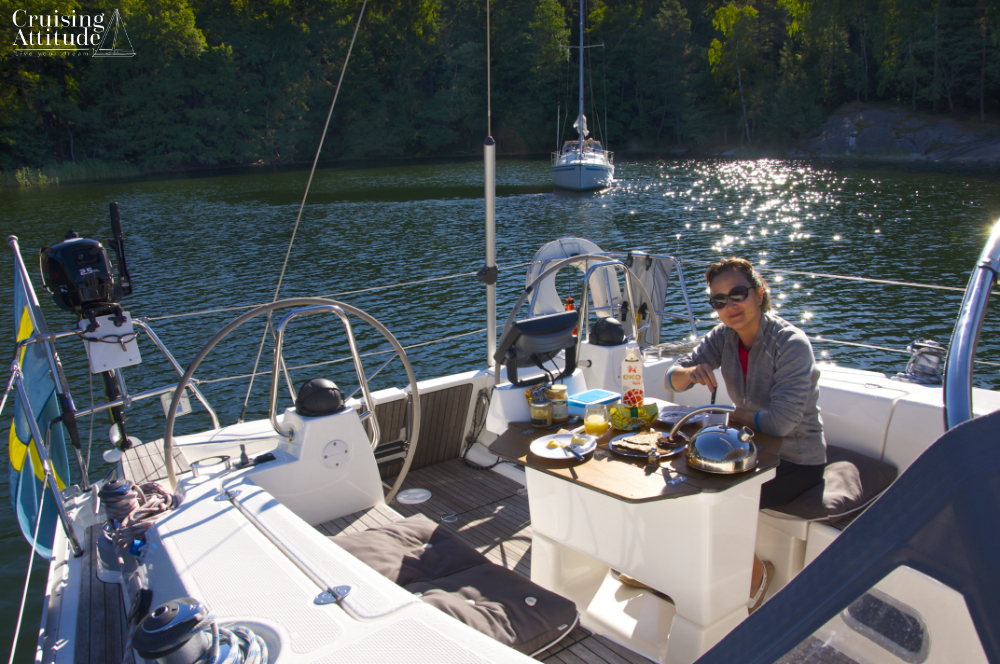 Having a leisurely breakfast in the beautiful anchorage of Napoleanviken on Ägnö.

Today’s plan was to sail to Utö, one of our favourite islands.  Our route would take us past Dalarö and the Dalarö fortress.

The fortress at Dalarö, called Dalaröskans.

The village of Dalarö is worth a stop – at least for a couple of hours.  The small shops and cafés are wonderful. We highly recommend the Bistro Solsidan. In 1996, we were forced to spend three days here during a force 9 gale, and we were lucky it was here and not somewhere boring. 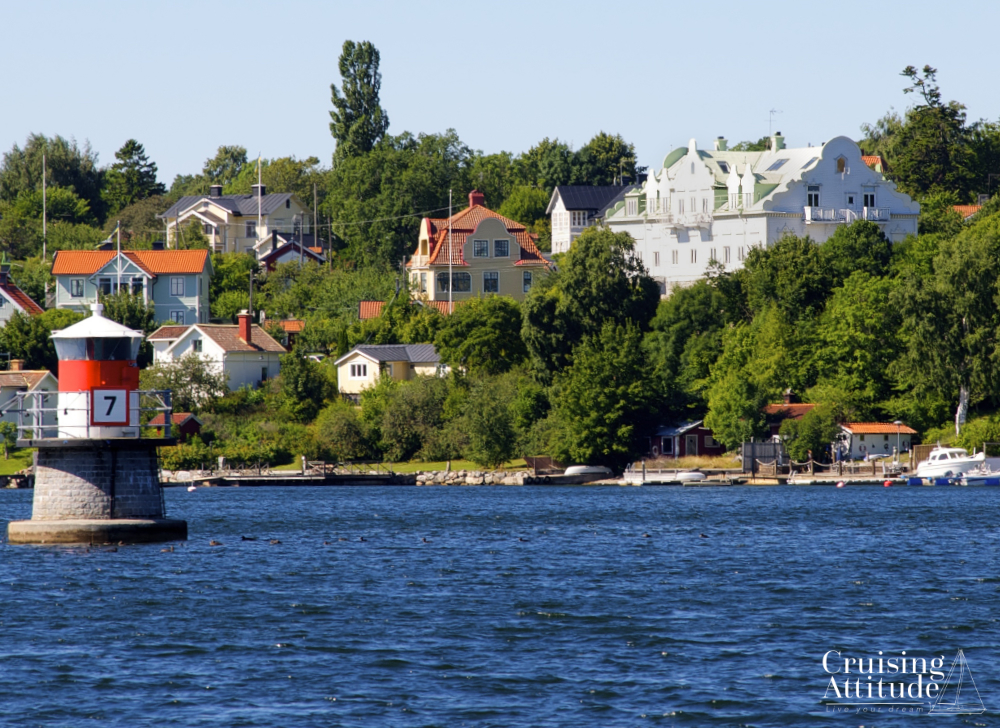 View of Dalarö in the southern Stockholm Archipelago.

Utö  has the advantage of being on the outer edge of the archipelago. It’s name means “out island”. The inland side, where the marina is located, is protected from the offshore winds and waves. The outer side gives you a fantastic view of the open Baltic sea.  Perfect for a picnic, a swim or just a glass of wine on the cliffs. 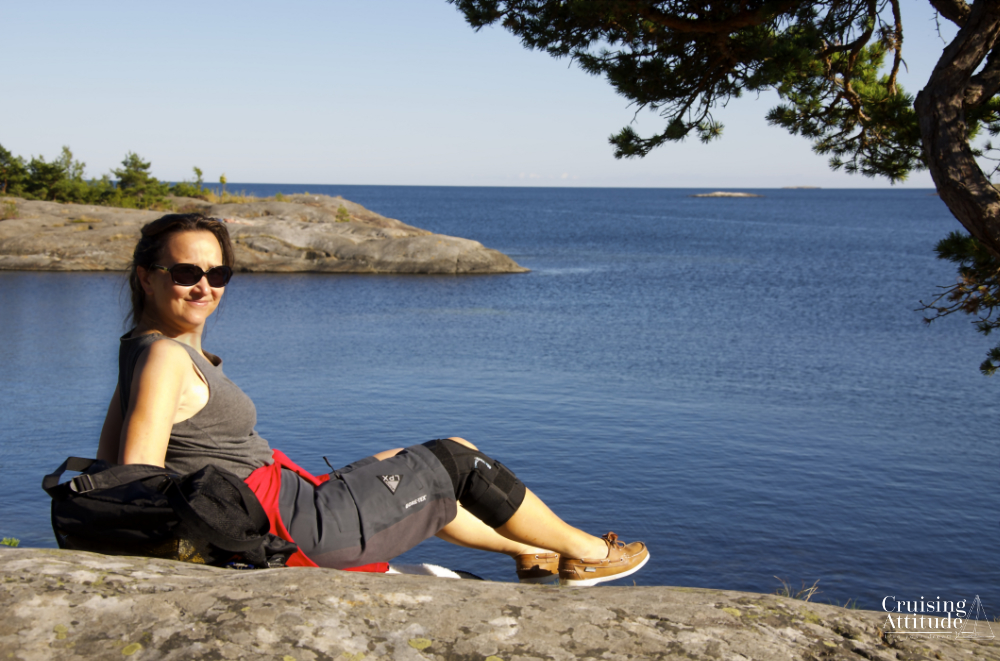 Beautiful cliffs facing the open Baltic Sea on Utö. You can see the evidence of my sprained knee in this photo.

The island was a used back in the day as a iron mine. From the 1100’s until the end of the 1800’s, iron mining was the main activity of the island.  At the beginning of the 1900’s people started using the island as a summer holiday resort.  A glamorous restaurant and hotel, the Utö Wärdshus, was built towards the end of the 1800s and attracted the celebrities of Stockholm.  It’s still open today.

The area around Utö marina hosts several restaurants, cafés and bar as well as a fantastic bakery.  There’s a well-stocked grocery store and a few boutiques that sell clothing, artisan-made home/boat ware, fresh seafood and souvenirs.  You can also rent bikes and kayaks to explore the island. 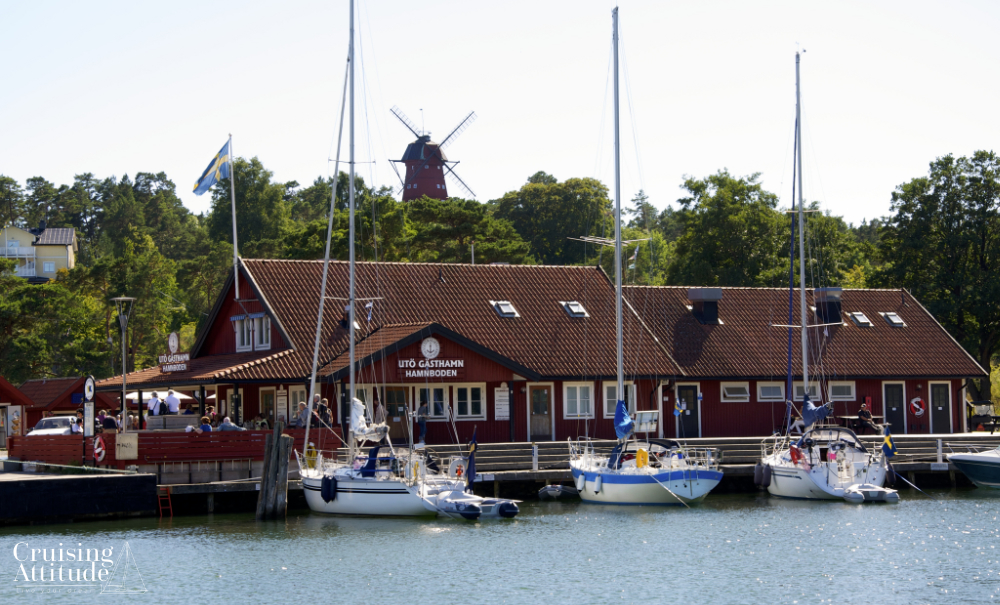 Utö Marina. The old windmill dates from the 1700’s and serves as a handy navigation mark. It’s open for visits.