We reluctantly left the island of Vejrø and set sail for Skaelskor, a town that lies at the end of a shallow fjord on the east side of the island of Sjaelland.

A view of the long fjord that leads to Skaelskør

It was really quite a shock to see people fishing almost right next to your boat as you negotiate the winding curves of the fjord!  The fjord is really quite shallow, but a boating lane is dredged and marked with green and red navigational marks.  If you stay within the marks, you won’t go aground.

People here fish just outside the shipping channel. Here you can see how shallow the fjord is outside the dredged channel.

The marina in Skaelskør is quite small and we were lucky to find a place large enough for our boat (probably because it was still quite early in the boating season).  It’s a bit tricky to moor in the marina because there’s a current running from the lake into the fjord and vise-versa depending on the tides — just a little warning!  It’s not very expensive — we paid just DKK 200.  Electricity is not included, you have to use a chip card and the vending machine for the chip cards was out of order. As it was Sunday, there wasn’t much we could do about it, though a couple of members of the sailing club that runs the marina tried to help.  The Danes really are lovely people.

The view towards the centre of town and the marina

The town itself is one of the those charming Danish small towns with small boutiques, restaurants and cafés.  There’s also a large lake — had we had the time, we would have ridden our bikes around it as the weather was beautiful!

The charming town of Skaelskør

Nyborg stands at the western point of the Great Belt Bridge, the longest bridge in Denmark at almost 7 kilometers long.  The suspension part of the bridge, officially called the East Bridge, is the longest suspension bridge outside of Asia (number 3 in the world).

When you arrive at Nyborg with your own boat, you have a choice of 2 marinas: the large marina on the west side or the slightly smaller one directly ahead towards the  middle of town.  The larger marina is perhaps the best choice if you have a boat that’s up to about 14 meters in length.  It’s a cosy marina that uses the “red and green sign” system.  A green sign means the berth is free to use.  All services including a marine shop, engine service, and sail service are at hand here. 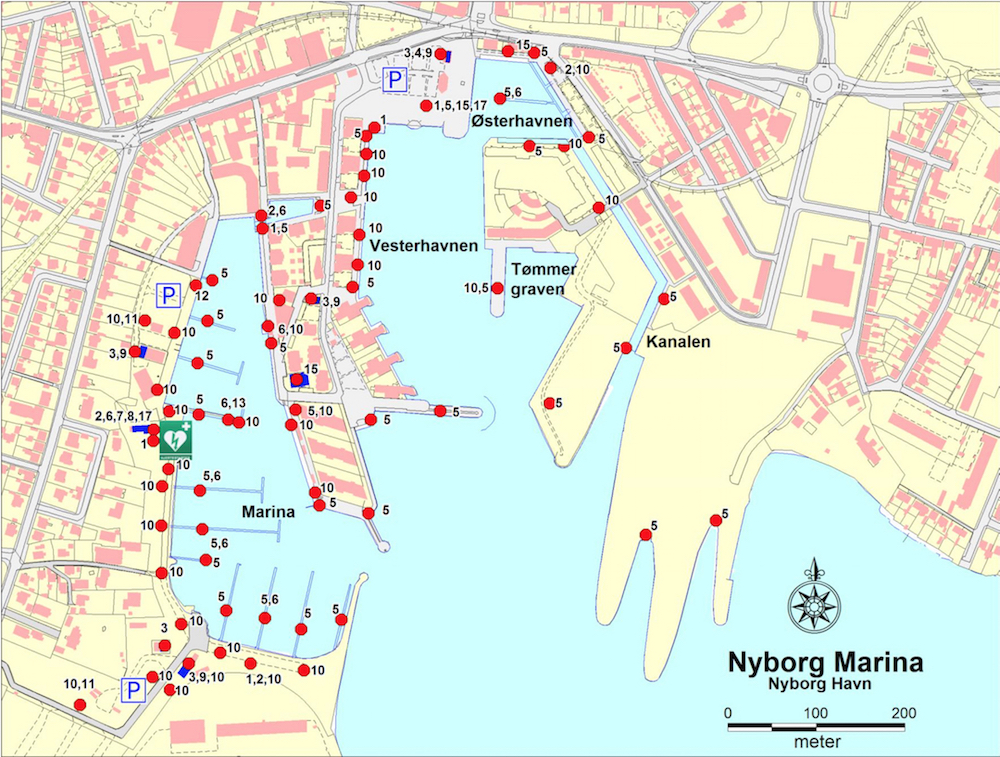 The marina on on the left side of the map is for boats less than around 45 feet or 14 meters; larger boats should proceed into the Vesterhavnen or Østerhavnen.

If your boat is over 14 meters long, or if you have a catamaran, it’s a better idea to choose one of the 2 small marinas that have been constructed at the new apartment building area. As we approacehed the marina, a boat came out telling us that our boat was too large for it.

In the Westerhavn, there’s really no limit to the length or width of your boat.  It’s a bit farther away from all the services, but if you have a bicycle, that’s not problem. The Østerhavn is closer to town, but there is a certain length limit (perhaps up to 70 feet)  We moored up in the Westerhavn. 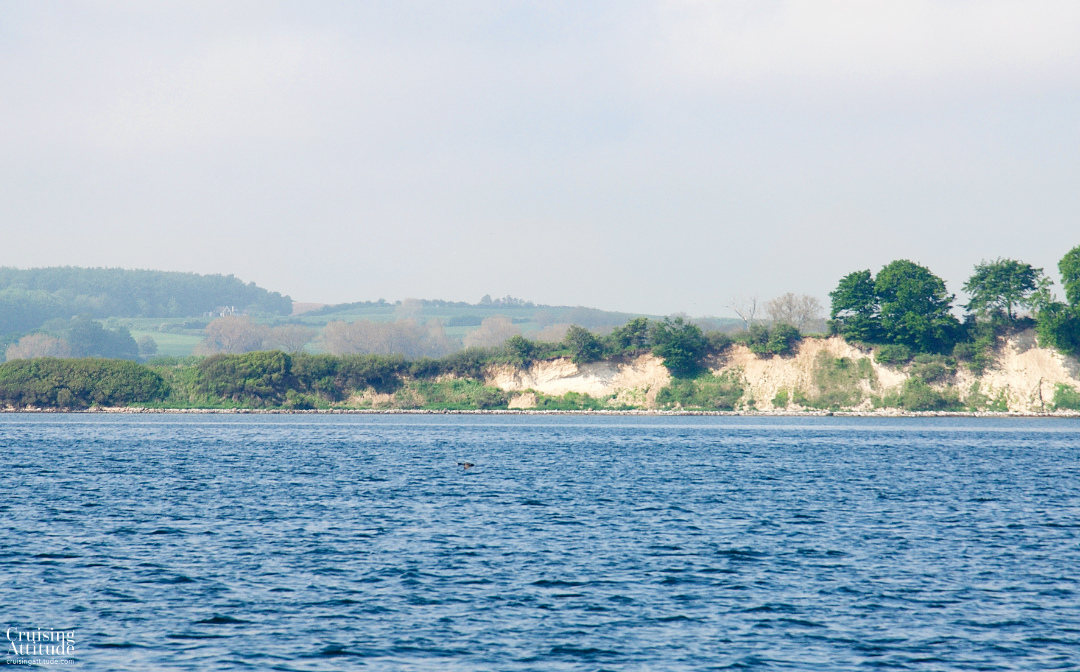 The rolling landscape around Nyborg 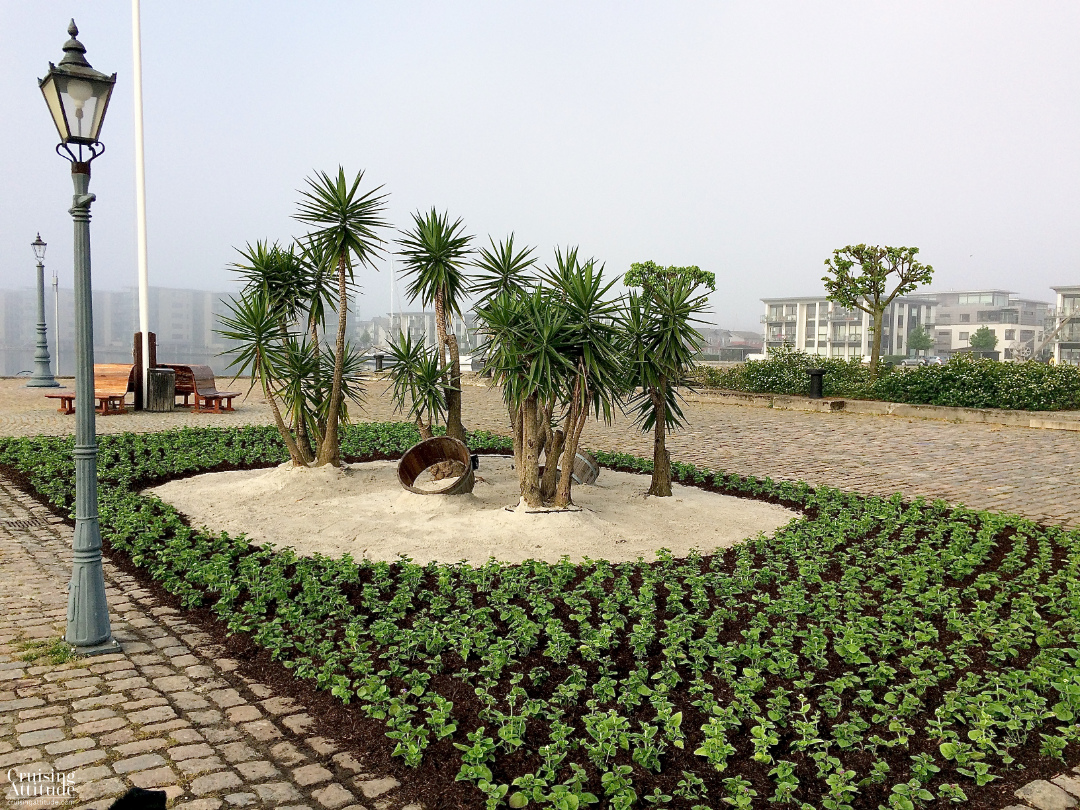 View from the Østerhavn on the foggy morning of our departure

The prices in Nyborg include electricity and toilets, but strangely enough, not showers. Here are the prices as of 2016:

The old town of Nyborg is small and really quite charming with its 16th-17th century architecture.  The city was actually founded at the beginning of the year 1200 with the construction of its castle (Nyborg Castle).  We took out our Bromptons and explored quite a bit of Nyborg.

First stop, the marine shop, where we picked up some anti-slip tape, some leather cleaner for our saloon sofas, and some anti-chafe bands for our lines.  We also needed a 16 amp adapter (not all 16 amp sockets are the same, some take three prongs, some take 5).  The marina shop did not have one, but they directed us to the biggest electrician business in town.  We bike there to get one, but when we didn’t have cash on hand (they didn’t have a credit card machine since their services are billed), the owner of the company said he would stop by our boat after work with the part.  So lovely!  We invited him to have a cup of coffee and chat.  It turns out that he has a sailboat at the marina.

We stayed for one more day so that we could do some grocery shopping and find some good dog food for Senna (the grain-free “Paleo” kind).  One word of advice for grocery shopping in Denmark.  Stay away from the Netto stores if you are a foodie.  Fortunately, we found a good fish shop in town, so that took care of a few more dinners. 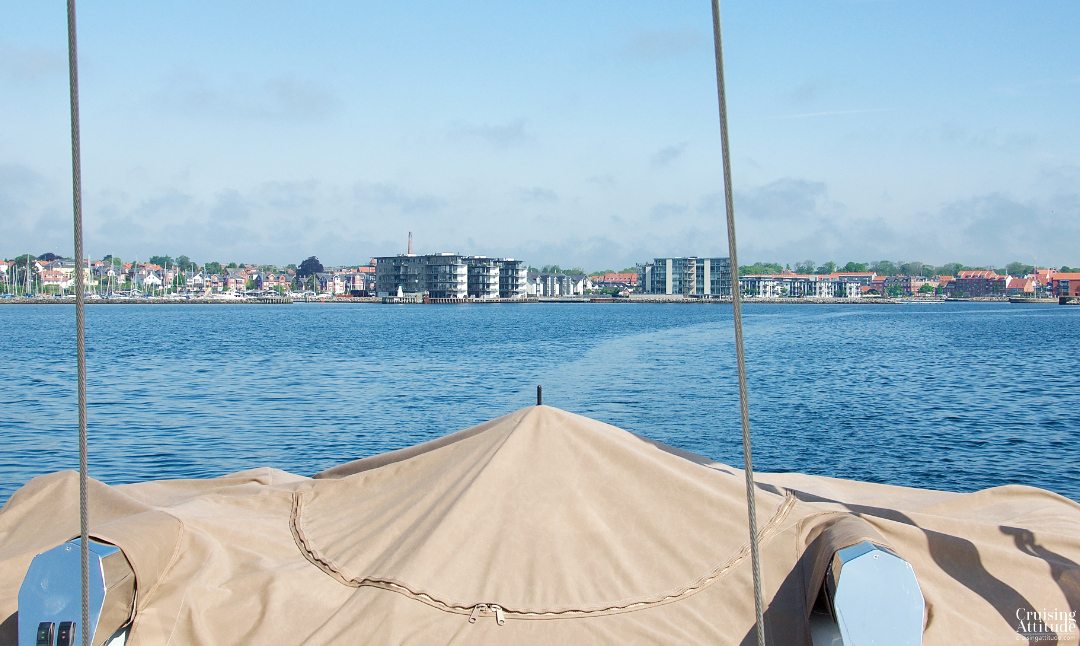 View of the entrance to the marinas in Nyborg

On the morning we chose to leave Nyborg — surprise — we were suddenly enveloped in fog.  The marina itself and the channel out were relatively sunny, and then we noticed the fog bank coming toward us from the north.  Time to switch on the radar.  And to use the fog horn built into our Icom VHF unit on the pedestal.  The ColRegs say that we should give one prolonged blast on the horn at least every two minutes (for a power-driven vessel). We were under power since there was only about 2-3 knots of  wind. 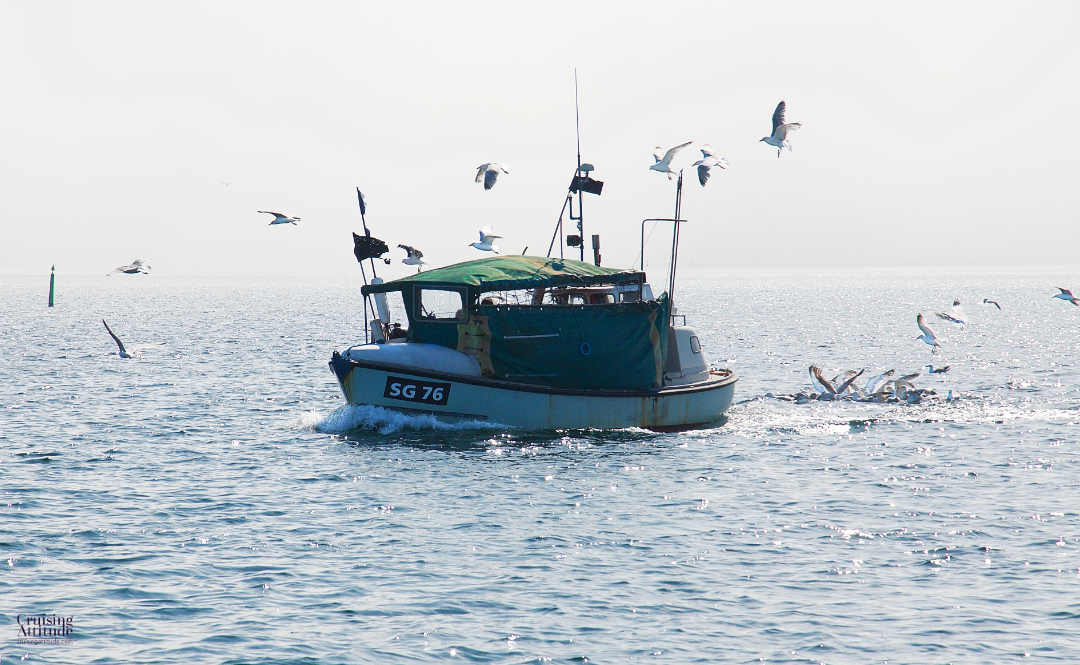 Foggy morning in the Great Belt of Denmark (between the islands of Fyn and Sjaelland).

It’s quite easy to use the radar on our Furuno TZ plotter since there is a chart overlay option.  With the chart overlay,  you have the vessels that use AIS identified on your radar image and you see coastal features identified with the radar. 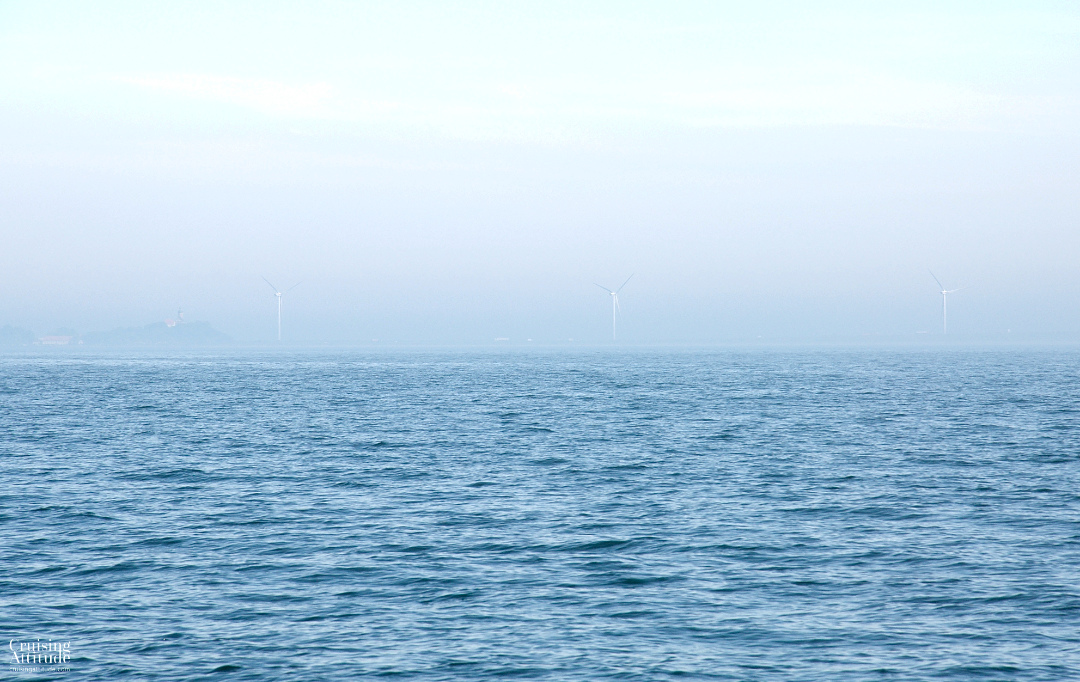 We were not looking forward to going through the Great Belt in the fog!  It’s a heavy-traffic area and you even have to call in your boat name, direction of travel, etc. to Belt Traffic Radio if your boat is over 15 meters long.  We called them on the VHF, saying that we were northbound, going under the East bridge on the eastern side, but outside the TSS (shipping lane).  Pleasure boats are forbidden to use the shipping lanes here. 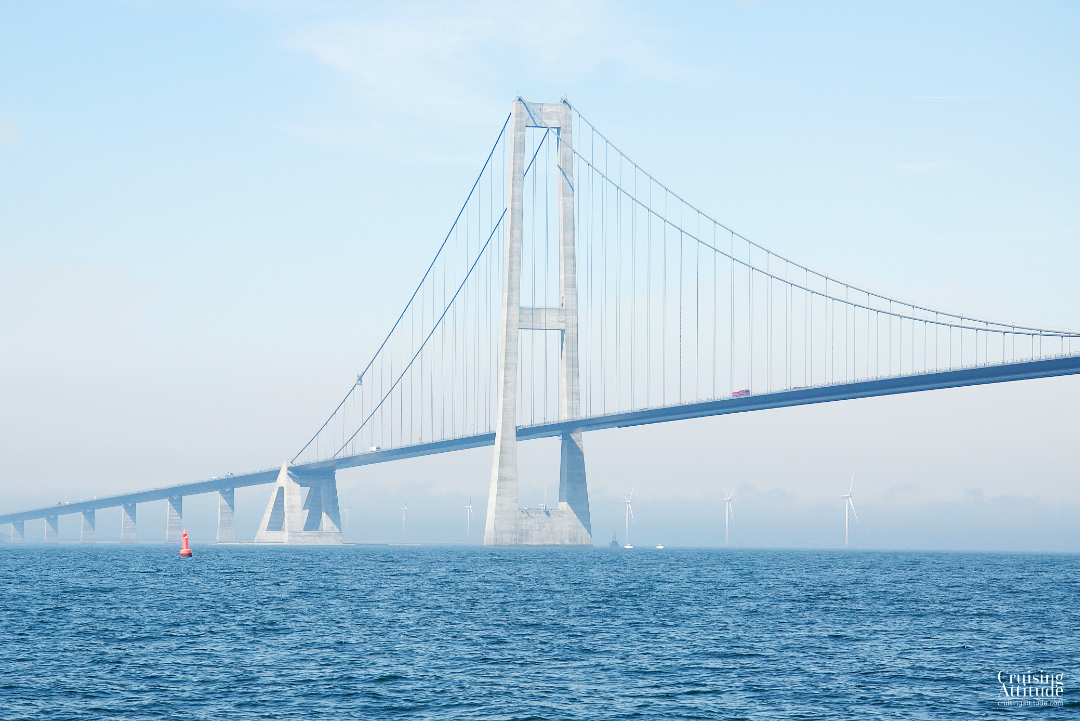 About 10 minutes before we were to go under the bridge, the fog lifted

Fortunately, just as we were crossing the TSS from west to east (at a right angle following all the rules), the fog began to lift.  What a relief!  We started to get a look at this beautiful suspension bridge in the sunlight.  We had crossed it on our motorcycles back in 2011, and had passed under it at night last year, so this was the first time we saw it in from the water during the day. 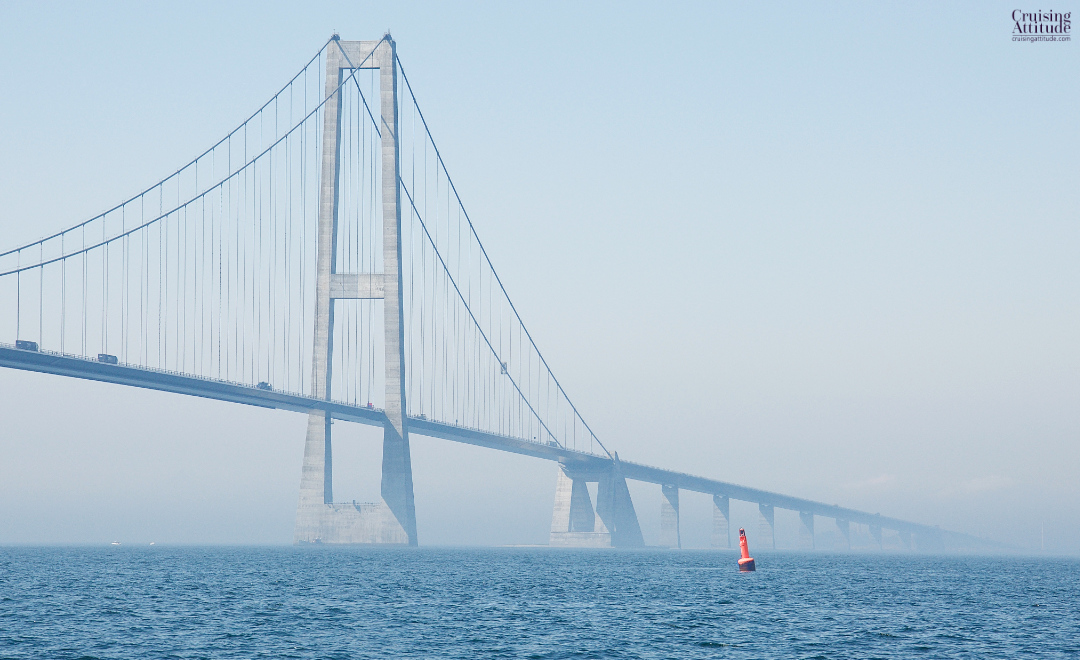 This is the longest suspension bridge in the world outside of Asia. 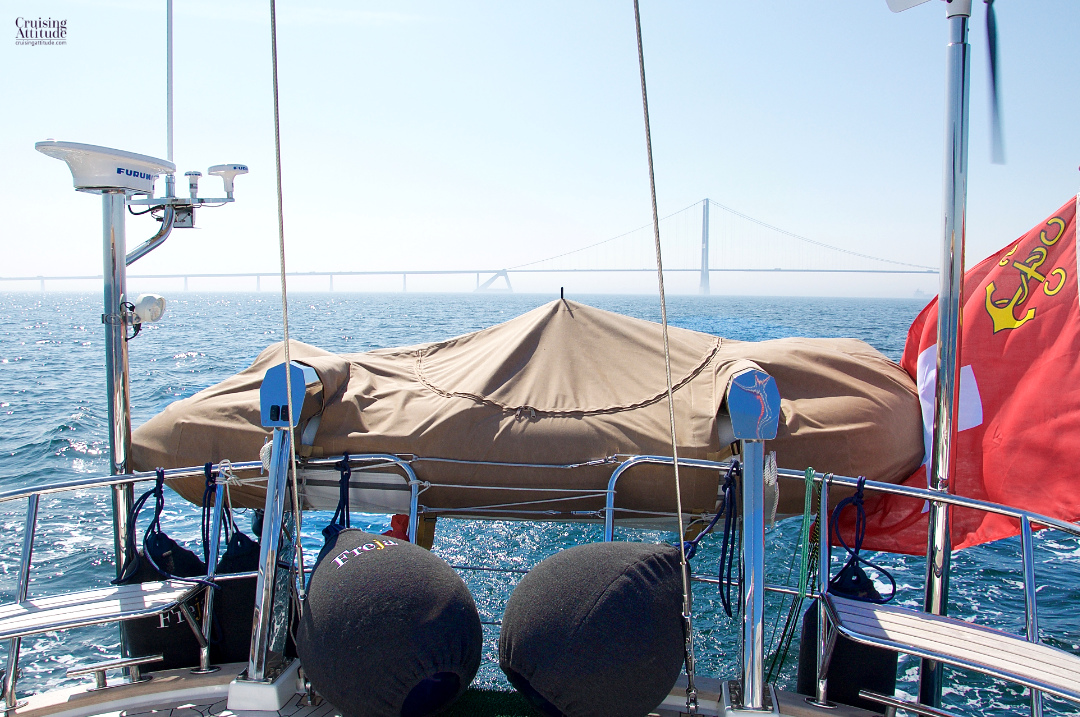 Our next destination was the small island of Sejerø located northwest of the big island of Sjaelland.  We read that 400 people inhabit the island permanently, which seems like a lot considering its size and location.  There is a ferry that runs to Sjaelland every 2 hours or 3 hours, so people could in fact live here and work on the “mainland”.

The ferry that runs from the small island of Sejerø to the much larger island of Sjaelland.

The marina was almost deserted when we arrived at around 15.00. There were only 2 other boats moored.  It was still May and the school holidays would not begin until around the end of June. We’ve seen photos of this marina taken in July packed to bursting — it’s that popular.

Diagram of the Sejerø marina and harbour

We’re off for a walk with Senna

Quiet evening on Sejerø. We were one of only 5 boats visiting the marina.

The first thing we did after paying for our berth at the pay station (the marina office was still closed for the season) was to take a walk to see if there was a seafood shop.  We didn’t find a seafood shop but we found a fisherman that sold us some fish off his boat!  Yay!  Fresh fish!  As fresh as you can get it without catching it yourself.

Then we asked each other if we knew how to clean flat fish (these were Dover Sole).  We phoned a friend who is a professional chef and restaurant owner to ask how one prepares them for cooking.  It’s not easy without the three different knives you need to have to do a professional job, but we managed.

One of the picturesque beaches on Sejerø. Our dog Senna was in the water all the time.

One of the many Eider families we saw on Sejerø. It was hatching time.

We spent the next day relaxing on the beach with Senna and doing some cleaning and polishing in and on the boat.

Last evening on the island of Sejerø